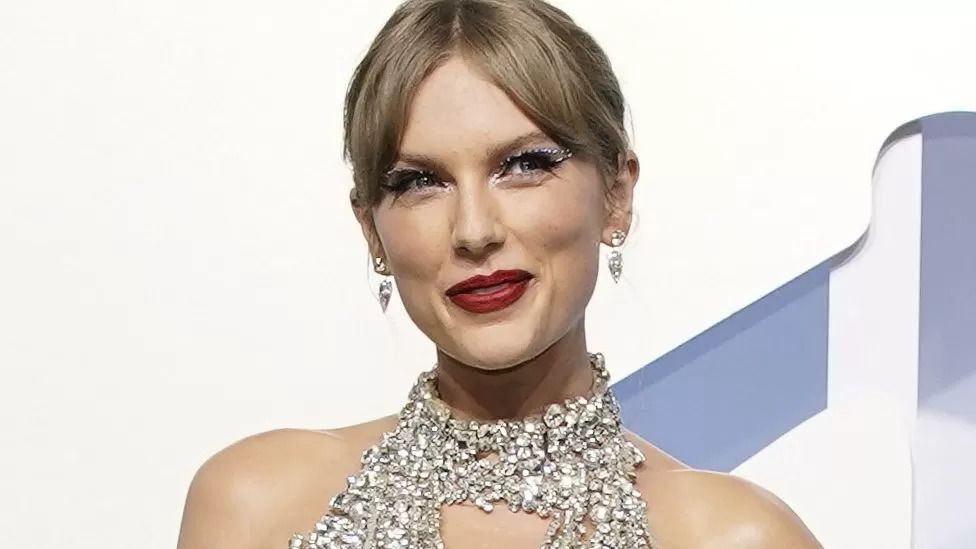 Taylor Swift has become the first artist in history to claim every slot in the top 10 of the US singles chart.

She overtakes Drake, who held the previous record of nine top 10 singles in September 2021. Before him, the Beatles scored eight top 10s in 1964.

Swift's chart domination is thanks to her latest album, Midnights, which has become 2022's fastest-selling release.

The 32-year-old claims the number one spot with the single Anti-Hero, whose chorus, "It's me. Hi! I'm the problem, it's me," has quickly become a Tik Tok trend.

The rest of the top 10 includes album tracks like Lavender Haze, Maroon, Snow On The Beach, Bejewelled and Karma.

All 13 of the songs on Midnights' standard edition make the top 15, interrupted only by Sam Smith's Unholy at 11 and Steve Lacy's Bad Habits at 12.

The seven bonus tracks from Midnights' deluxe "3am edition" appear between numbers 20 and 45. 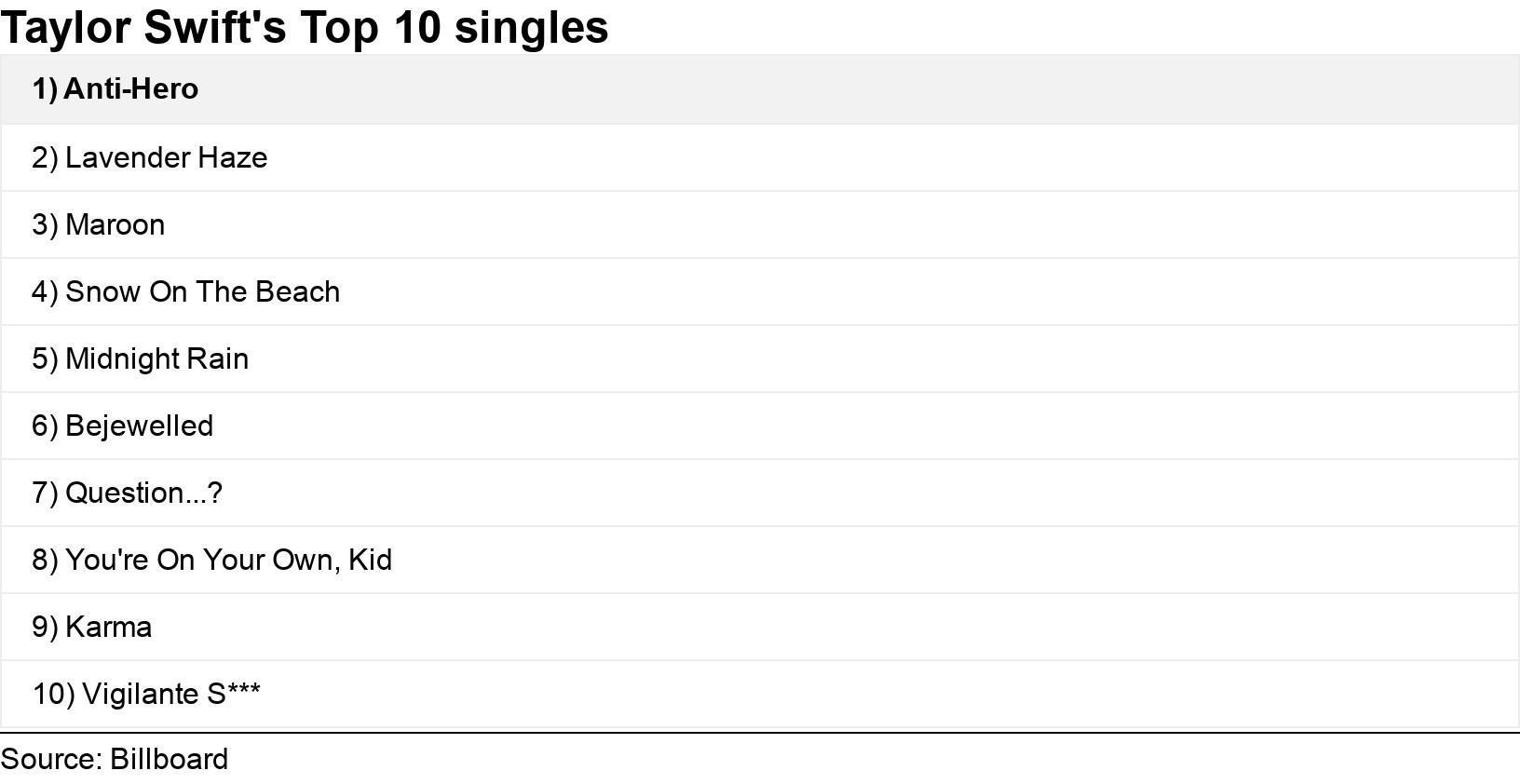 Swift took fans by surprise when she announced the new album in the closing moments of the 2022 MTV VMAs in New Jersey in August.

She has described the record as the story of "13 sleepless nights scattered throughout my life" and "a journey through terrors and sweet dreams".

It sees the star return to the pop palette of her pre-pandemic albums, after the homespun indie-folk of Evermore and Folklore, both released in 2020.

But the subdued sounds of those records persists, and her late-night tales are painted in more muted tones than hits like Shake It Off and Lover.

Part of its success is due to a clever marketing campaign, which saw the album released in multiple collectible formats - including four vinyl editions which combine to make a clock.

But Billboard reported that Swift's Top 10 takeover would have been achieved by streams alone, before sales and radio play were counted.

Midnights debuted at number one in the US album chart, selling 1.4 million copies - with more than one million of those on CD and vinyl, an almost unheard of figure in the streaming era.

The album similarly tops the UK chart with sales of 204,000, making it the first album to crack the 200,000 sales barrier since Adele's 30 just under a year ago.

Surprisingly, that figure represents the biggest first-week sales of Swift's UK chart career. Her previous best was for the album 1989, which shifted 90,300 copies in 2014.

However, she cannot replicate her domination of the US singles countdown - due to a UK chart rule that only allows three songs by one artist to appear in the Top 100 at the same time.

Without that restriction, Swift would have had eight of this week's top 10 singles. Instead, she has to content herself with being number one (Anti-Hero), three (Lavender Haze) and four (Snow On The Beach).

Last week's number one, Sam Smith's Unholy, clings on at number two, denying Swift a clean sweep at the top of the charts.

She now boasts the most top 10 hits among women in the chart's history, with her total of 40 surpassing Madonna's 38. Amongst all acts, she trails only Drake, who has 59 top 10s.

Midnights is also the first album in history to spawn 10 top 10 singles.

Swift also broke records for the most streams of a single album in one day on Spotify, Apple and Amazon Music.

In the UK, Midnights sold 62,000 copies on vinyl alone - the highest weekly sale for any vinyl album in the 21st century. 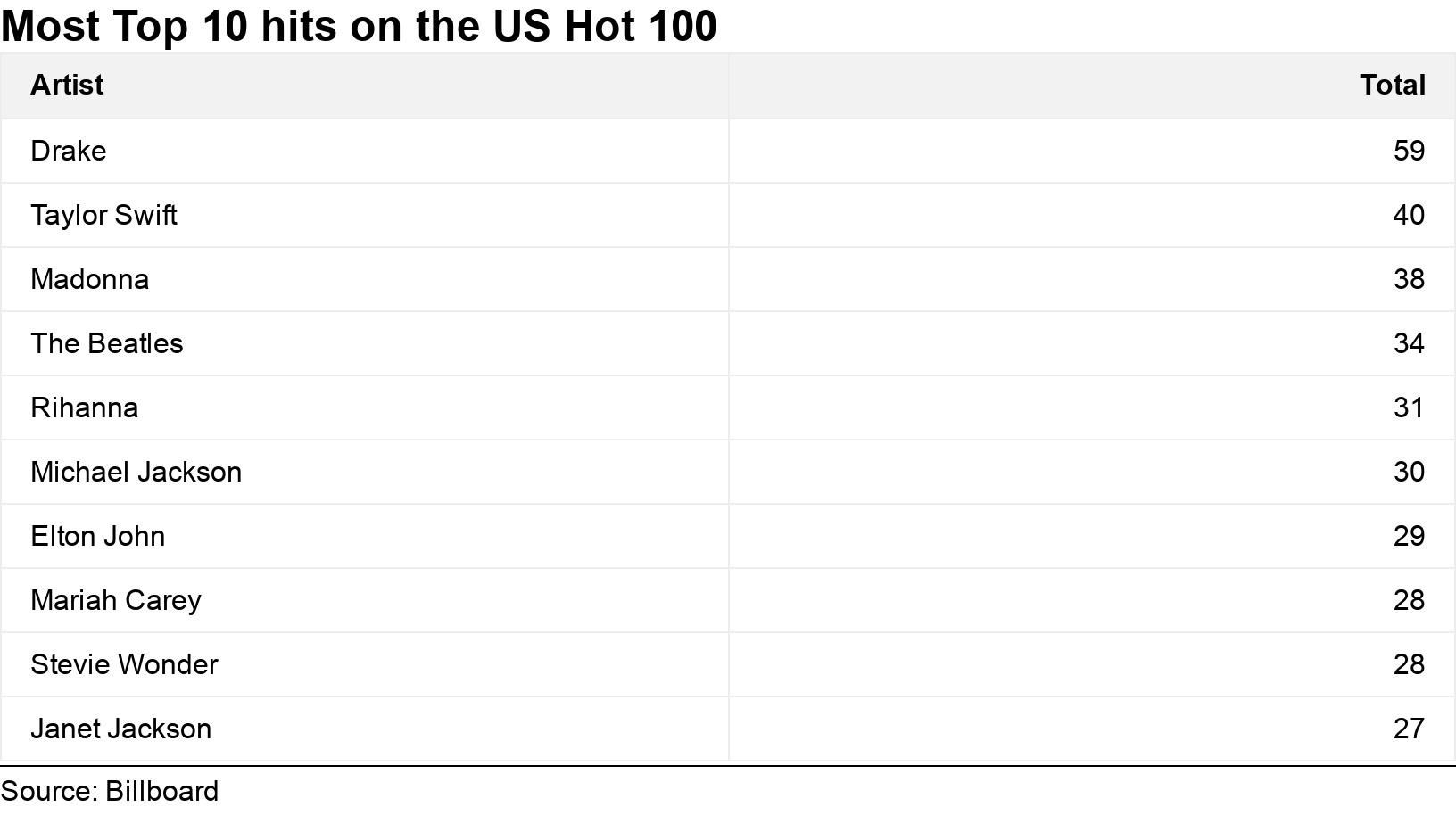