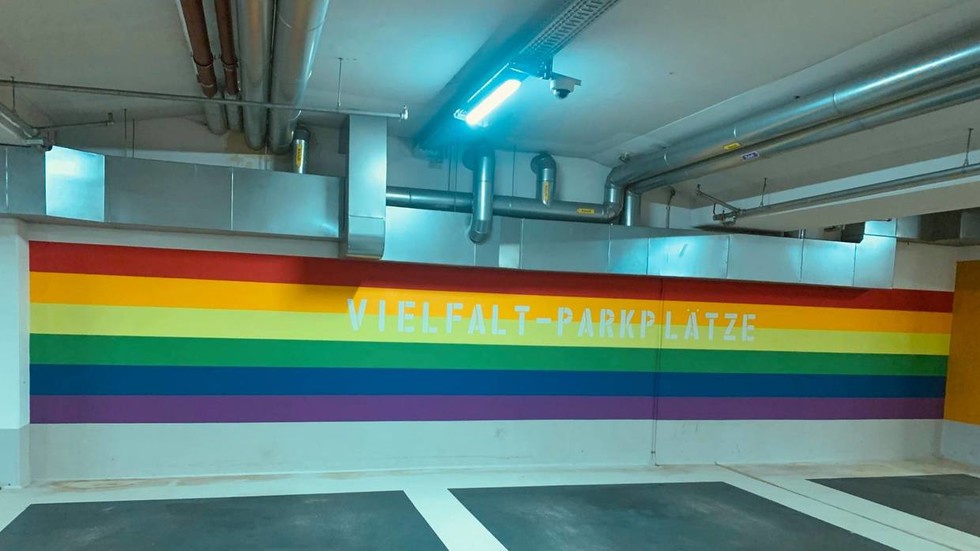 ‘That’s right straights, back of the bus!’: German car park ridiculed for installing rainbow-painted spaces for LGBT and migrants

A car park in Hanau, Germany has been mocked for setting aside three rainbow-colored parking spaces for LGBT drivers and migrants who have “a special need for protection and security in public spaces,” a local councillor said.

The wall alongside the three new ‘Diversity Spaces’ in the Hanauer Parkhaus is daubed in the rainbow colors of the ‘Pride’ flag, and the spaces – located nearest the multi-storey structure’s exit – are monitored by cameras. At an opening ceremony for the spaces last week, Hanau councillor Thomas Morlock said that the spaces are intended for LGBT people and migrants, and serve as a “conspicuously colorful symbol” for “diversity and tolerance.”

The initiative quickly drew criticism online. “Child and old age poverty, single mothers at their financial limit, pensioners who have to live on bottle deposits and leftovers from garbage cans,” one commenter tweeted, spelling out some of Germany’s social problems. “But for City Councilor Thomas Morlock in Hanau there is nothing more important than setting an example for tolerance.”

Others wondered why these groups were singled out for special treatment, while some simply tweeted expletives and clown emojis at the idea of “diversity spaces.”

Amid a storm of criticism, CSD Hanau, an LGBT advocacy group, suggested that locals may have been shocked by “too much tolerance.” However, the group said that the message behind the spaces had been “misunderstood,” and that anyone – gay, straight, German or foreign – could choose to park there “to take a stand against hate and exclusion.”

"The sometimes homophobic and xenophobic reactions make it clear that the action was right and necessary," Morlock added to the German Press Agency on Friday.

The spaces were inaugurated a week ago, but as the story hit the English-speaking world on Friday, the online reaction was equally negative.

Some commenters suggested that the idea may backfire, and that migrants from Islamic or other conservative cultures might not be too happy with being lumped in with gays, lesbians, bisexuals and transgender people.

The ‘Diversity Spaces’ are a new development in Hanau, but LGBT-themed crosswalks and intersections have been introduced in various Western countries, to similar reaction. These rainbow-colored street sections have been criticized by many as pointless virtue-signalling, and have in some cases become targets of vandalism.