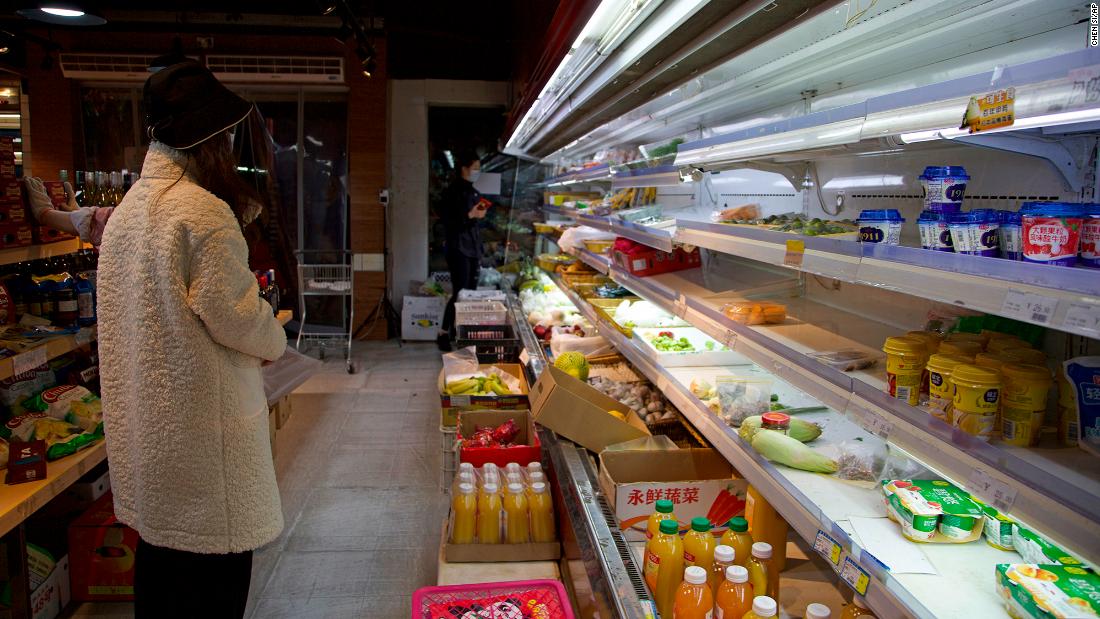 Nearly 400 million people across 45 cities in China are under full or partial lockdown as part of China's strict zero-Covid policy. Together they represent 40%, or $7.2 trillion, of annual gross domestic product for the world's second-largest economy, according to data from Nomura Holdings.
Analysts are ringing warning bells, but say investors aren't properly assessing how serious the global economic fallout might be from these prolonged isolation orders.

"Global markets may still underestimate the impact, because much attention remains focused on the Russian-Ukraine conflict and US Federal Reserve rate hikes," Lu Ting, Nomura's chief China economist and colleagues wrote in a note last week.

Most alarming is the indefinite lockdown in Shanghai, a city of 25 million and one of China's premiere manufacturing and export hubs.

The quarantines there have led to food shortages, inability to access medical care, and even reported pet killings. They've also left the largest port in the world understaffed.

The Port of Shanghai, which handled over 20% of Chinese freight traffic in 2021, is essentially at a standstill. Food supplies stuck in shipping containers without access to refrigeration are rotting.

Incoming cargo is now stuck at Shanghai marine terminals for an average of eight days before it's transported elsewhere, a 75% increase since the recent round of lockdowns began. Export storage time has fallen, but that's likely because there are no new containers being sent to the docks from warehouses, according to supply chain visibility platform project44.

Cargo airlines have canceled all flights in and out of the city, and more than 90% of trucks supporting import and export deliveries are currently out of action.
Shanghai produces 6% of China's exports, according to the government's statistical yearbook for 2021, and factory closures in and around the city are further rattling supply chains.

Sony and Apple supplier plants in and around Shanghai are idle. Quanta, the world's biggest contract notebook manufacturer and a MacBook maker, has stopped production entirely. The plant accounts for about 20% of Quanta's notebook production capacity, and the company previously estimated it would ship 72 million units this year. Tesla has shuttered its Shanghai Giga factory, which produced about 2,000 electric cars a day.

On Friday, China's Ministry of Industry and Information Technology said in a statement that it sent a taskforce to Shanghai to work on a plan to resume production at 666 key manufacturers in the locked down city. Tesla executives hope they'll be allowed to reopen their doors by Monday, ending the factory's longest pause since its 2019 opening. The automaker has lost over 50,000 units of production thus far, according to materials reviewed by Reuters.

"The impact on China is major and the knock on effects on the global economy are quite significant," said Michael Hirson, Eurasia Group's practice head for China and Northeast Asia. "I think we're in for more volatility and economic and social disruption for at least the next six months."

The prolonged disruptions to Chinese manufacturing and shipping could help accelerate a key Biden administration initiative aimed at reducing US dependence on Chinese products and supply chains.

But the task comes with serious immediate economic repercussions.

In a report released last week, the World Trade Organization warned of a worst-case scenario involving decoupling global economies, spurred on by Russia's invasion of Ukraine, could reduce long-term global GDP by 5%.

That's highly unlikely given the deep financial connections between China and the US. Investment in each others' stocks and bonds reached $3.3 trillion at the end of 2020, according to data from Rhodium Group.

These are still very intertwined economies," said Hirson. "That integration is not something that's going to be easily reversed because it would be incredibly costly for the US and for the global economy."

Still, American economic leaders believe decoupling is already underway. Oaktree co-founder Howard Marks wrote in late March that "the pendulum [has] swung back towards local sourcing" and away from globalization. Blackrock Chairman Larry Fink echoed the sentiment in a letter to the company's shareholders. "The Russian invasion of Ukraine," he wrote, "has put an end to globalization we have experienced over the last three decades.

In a speech to the Atlantic Council last week, Treasury Secretary Janet Yellen said the US is watching China's political and economic connections to Russia closely. "Going forward, it will be increasingly difficult to separate economic issues from broader considerations of national interest, including national security," she said.

While she said she hopes a "bipolar split" between China and the US can be avoided, "the world's attitude towards China and its willingness to embrace further economic integration may well be affected by China's reaction to our call for resolute action on Russia."

A third of China, meanwhile, is stuck in quarantine, and its economy is suffering.

China's recent pandemic response is likely to cost at least $46 billion in lost economic output per month, or 3.1% of GDP, according to research from the Chinese University of Hong Kong.

Analysts no longer believe that China's 2022 target of 5.5% economic growth, the country's least ambitious goal in three decades, is realistic. The World Bank revised its estimates for Chinese economic growth this week to 5% but noted that if its restrictive policies continue that could fall to 4%.

The economic burdens come at a politically precarious moment. This fall, Chinese President Xi Jinping will petition for a third term as the nation's leader, breaking with the tradition of a two-term maximum.
#Covid  #Tesla