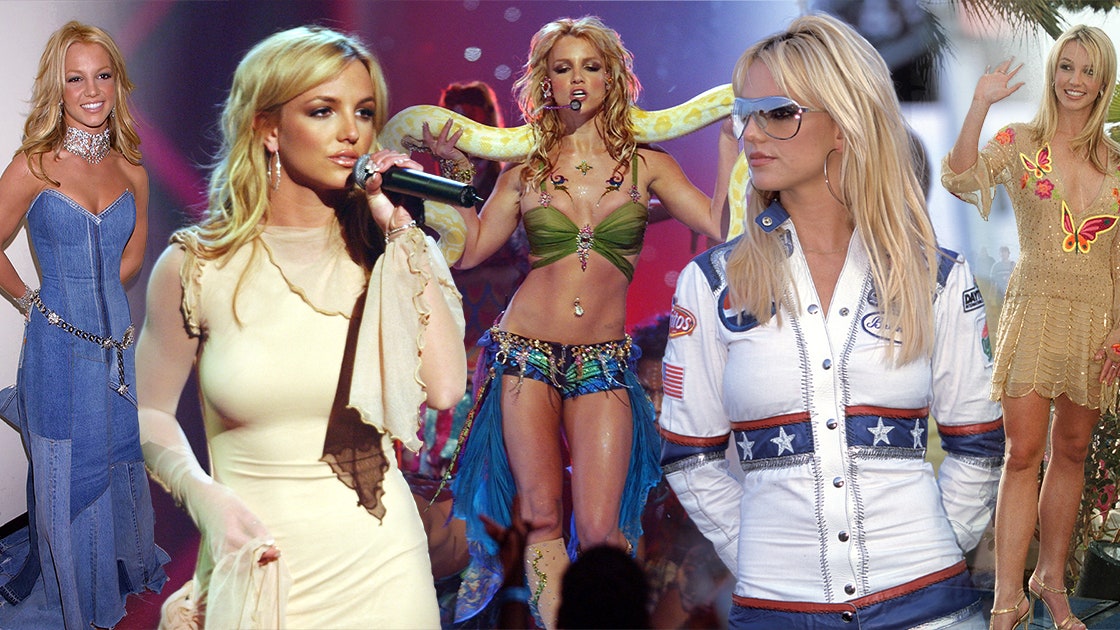 The Britney Era Turned a Pop Star Into a Fashion Icon

With her 2001 album, Britney Spears transformed into a polarizing fashion plate. Cue the infamous denim gown.

“I’m not a girl, not yet a woman,” Britney Spears sang these now-iconic lyrics on track four of her 2001 album, Britney. Though the line directly spoke to her phase of life, it was also indicative of the pop icon’s evolving personal style. Having just skyrocketed to fame with her first two studio albums, “… Baby One More Time” and “Oops!… I Did It Again,” the then-20 year old shed her innocent schoolgirl look in favor of sexier outfits and a more provocative sound overall for her third. (Britney opens with “I’m a Slave 4 U,” in which she proclaims, “I need to do, what I feel like doin’-so let me go, and just listen.”) In honor of the game-changing album’s 20th anniversary this week, Vogue is looking back at some of the singer’s best looks from the era (cue the infamous denim gown she wore to the AMAs).

Having cultivated a more wholesome (but still theatrical) pop-star look with “…Baby One More Time” and “Oops!,” Spears experimented with her newfound confidence as a young adult during the Britney era, showing a little more skin in the process. Famously, the media relentlessly criticized her for it, saying her new image was overtly-sexualized-but looking back, there was nothing perverse about her style. In fact, it was quite refined, especially on the red carpet. Spears often wore glitzy evening gowns and minimal, ethereal slip dresses-two garments that hardly make her a “bad example for kids.” Consider her dress for a Cannes press conference in 2001, when she wore a sweet Matthew Williamson v-neck mini from his spring 2002 collection, covered in embroidered butterflies. 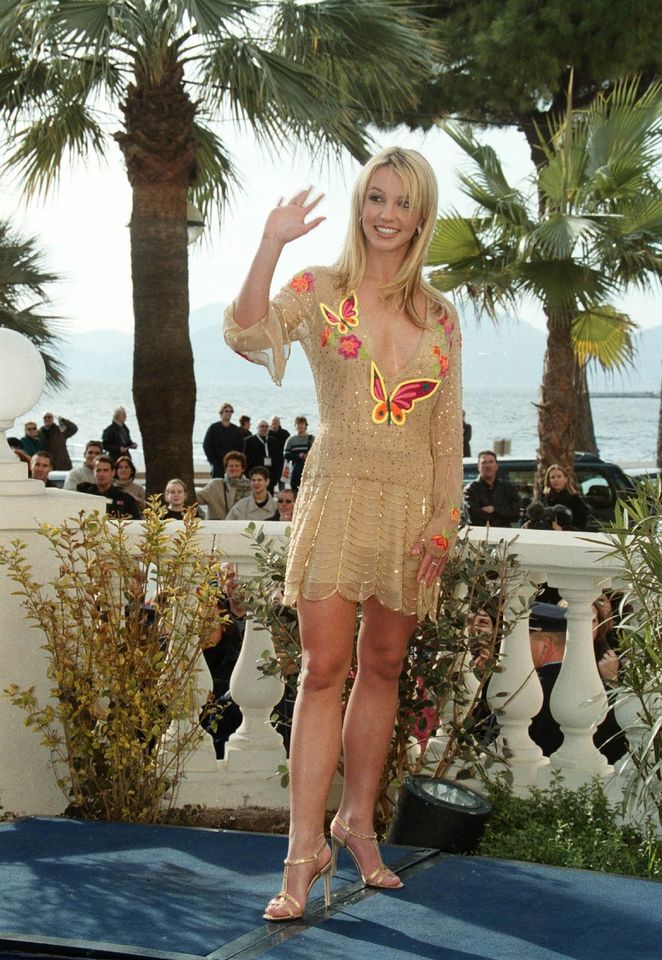 Spears also experimented with kitschier looks for events, which were often styled by the duo Kurt and Bart. Take the patchwork denim gown that the pair designed for her at the 2001 AMAs (her boyfriend at the time, Justin Timberlake, also wore a matching denim suit.) At the VMAs the same year, Spears wore a Dolce & Gabbana black lace dress that had everyone talking, thanks to its exposed black bra and underwear worn underneath it. But again, nobody would bat an eyelash if it were on the red carpet now. Perhaps people were mad because it was, quite simply, unapologetically hot.

In her stage performances and music videos, Spears further leaned into that racier vibe. Her 2001 VMAs “Slave” performance ensemble-the one with a real python on her shoulders-continues to be talked about today. But she often wore shredded or cropped tops made custom for her by Alina Campbell, who designed her off-the-shoulder top for the Britney album cover, during this era, too. For the “Slave 4 U” video, Campbell made a cropped top for Spears that was trimmed with gold lace and flower appliqués, and then completed with a matching arm cuff and low-rise jeans. Go figure, bicep cuffs and low-rise denim are both coming back today. Spears was simply ahead of the curve. 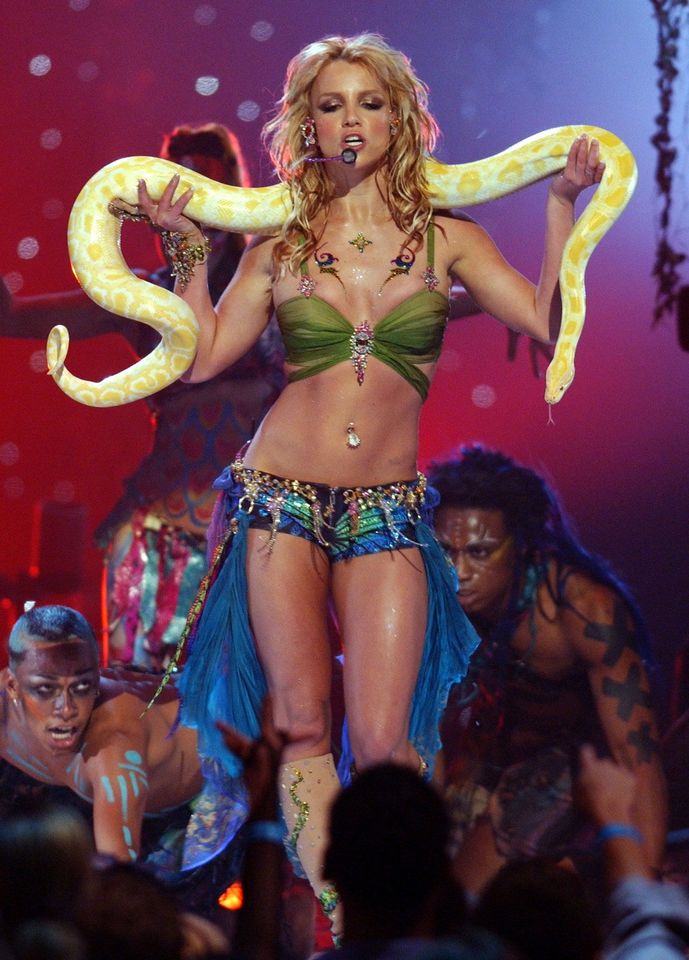 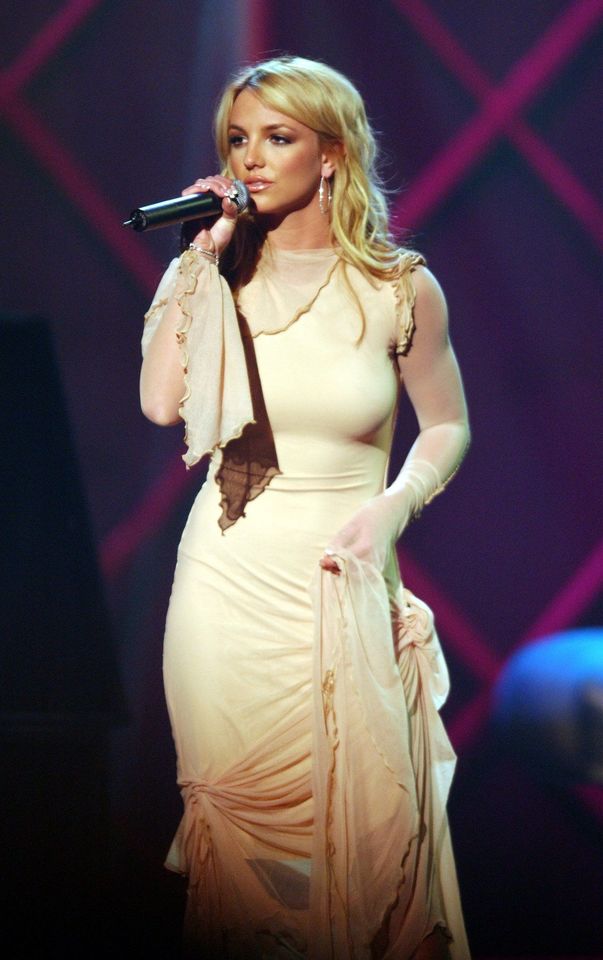 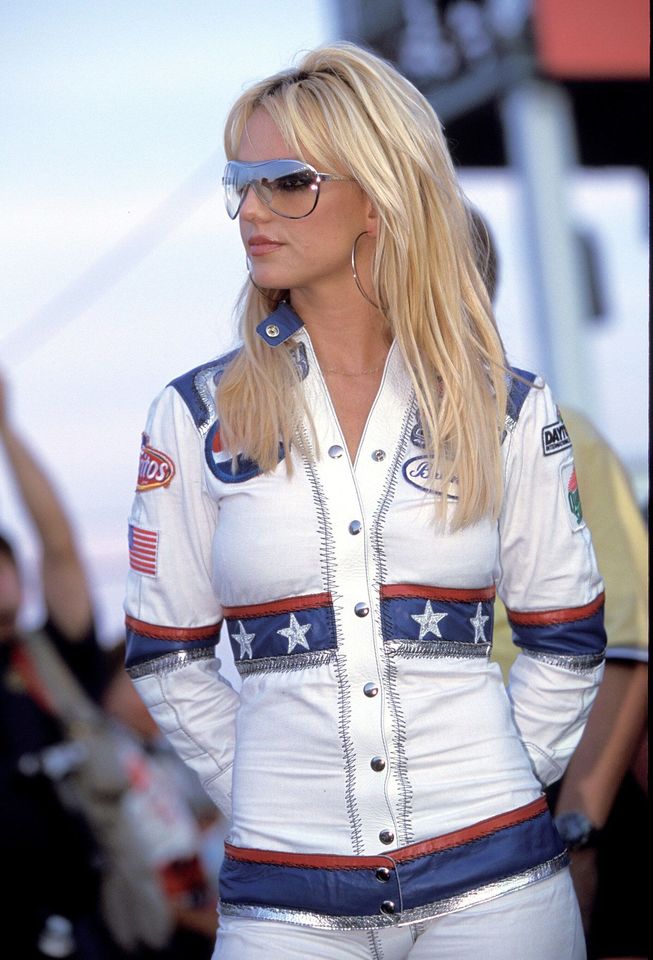 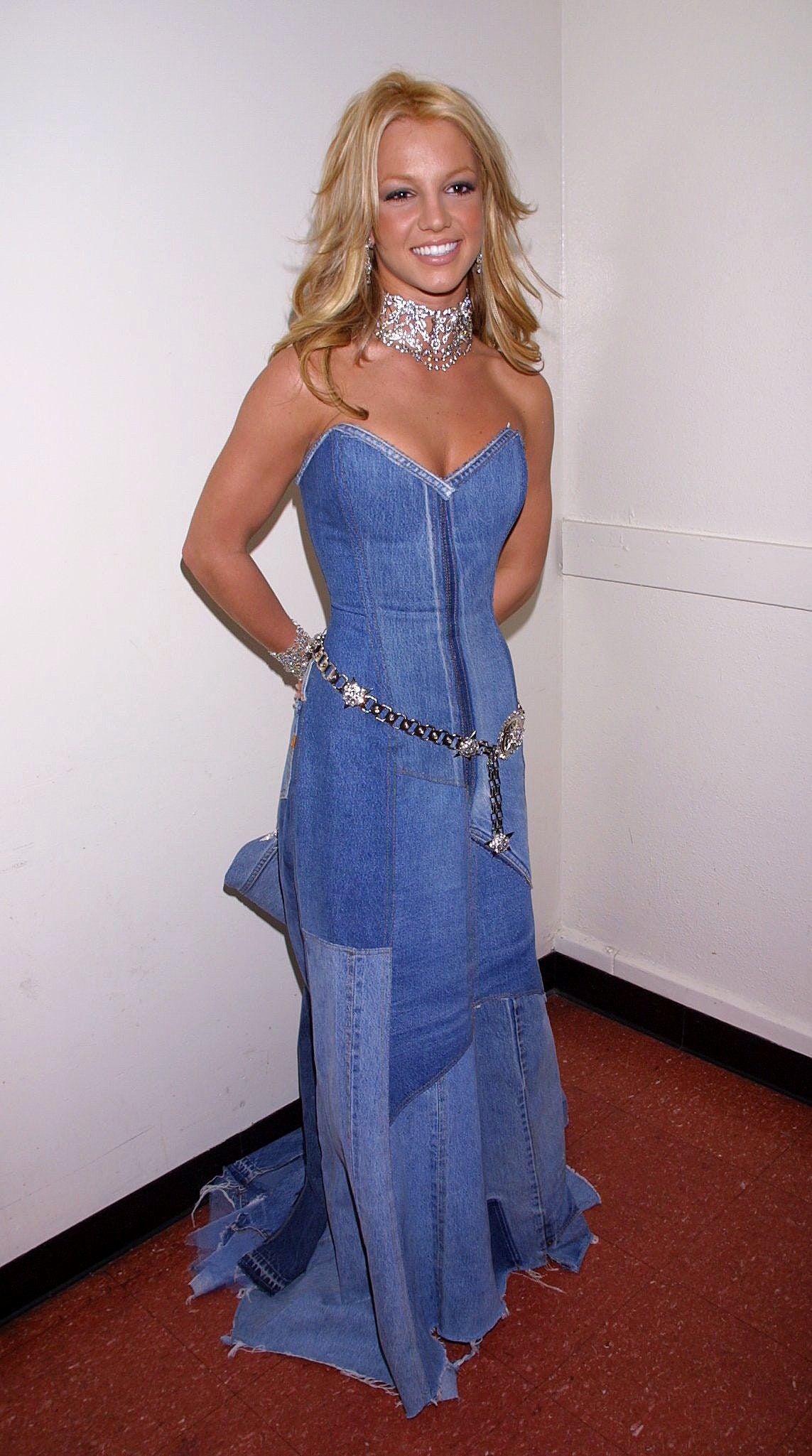 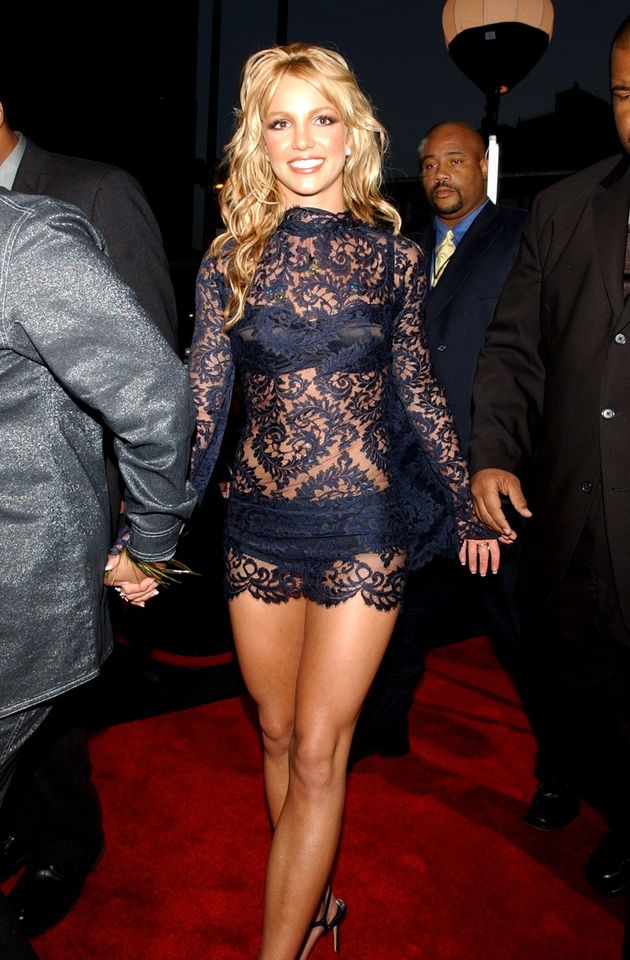 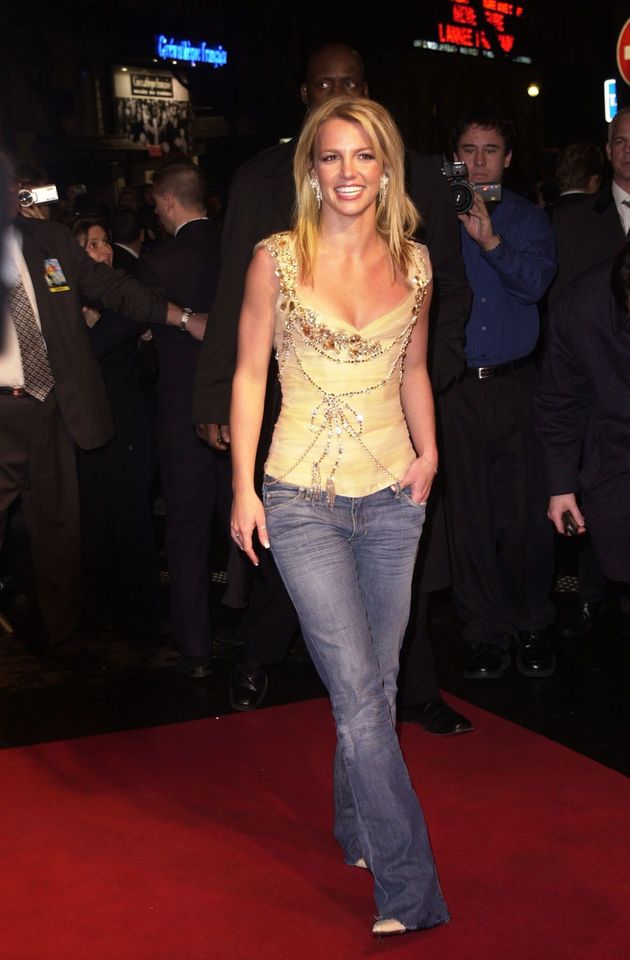 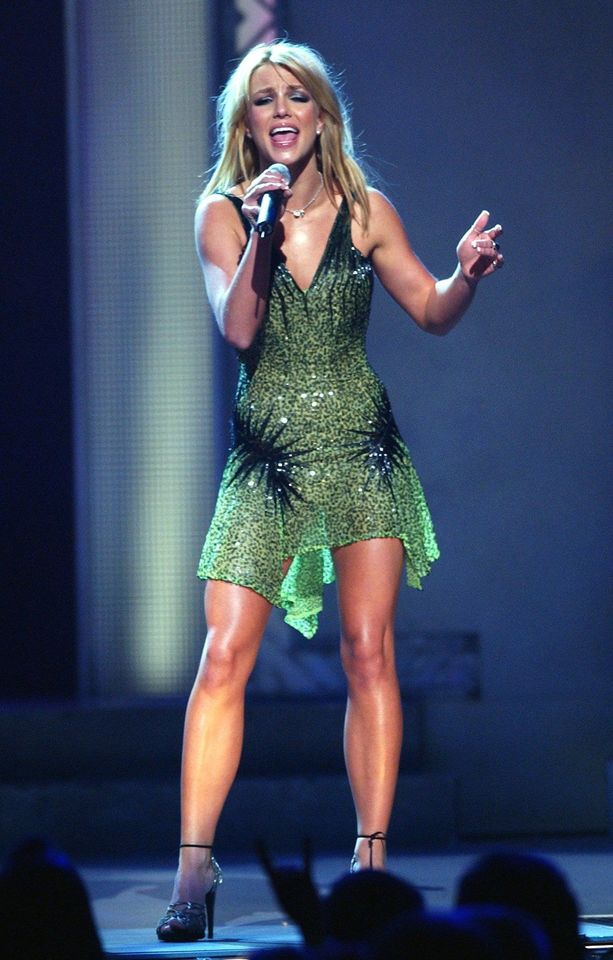