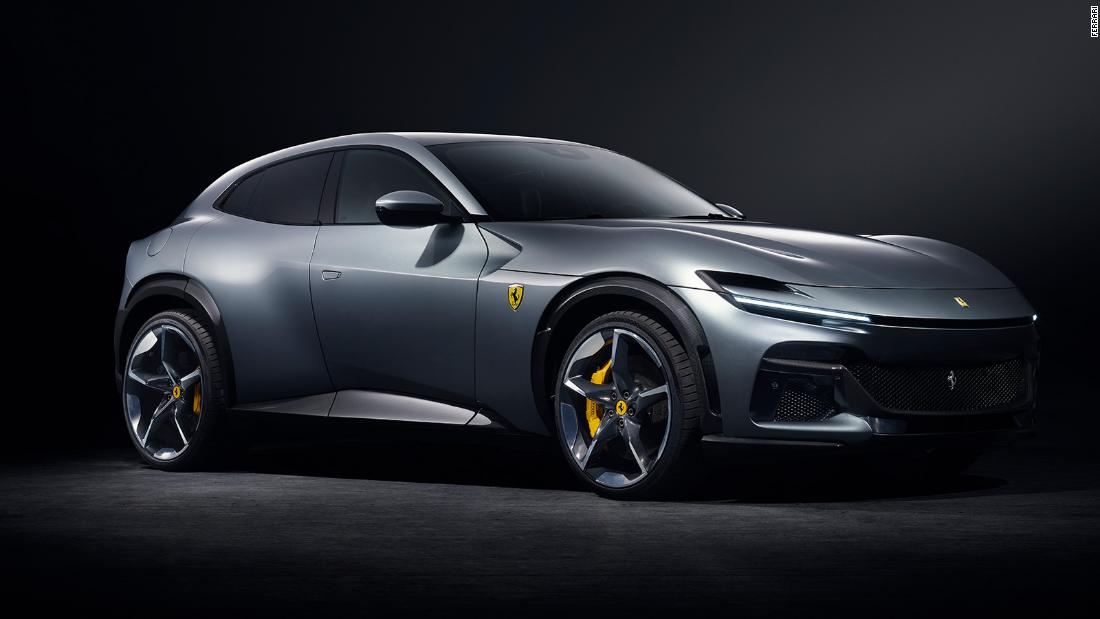 The Ferrari Purosangue is the company's first four-door car, just don't call it an SUV

Ferrari has unveiled the first four-door production vehicle the legendary Italian automaker has ever produced. It has a long hood that houses a gasoline engine and a single large area behind that which holds seats for four people and space for plenty of cargo. It’s also a four-wheel-drive vehicle. But, with the company’s sporting and racing history, Ferrari insists it isn’t anything so gauche as a “Sport Utility Vehicle.” 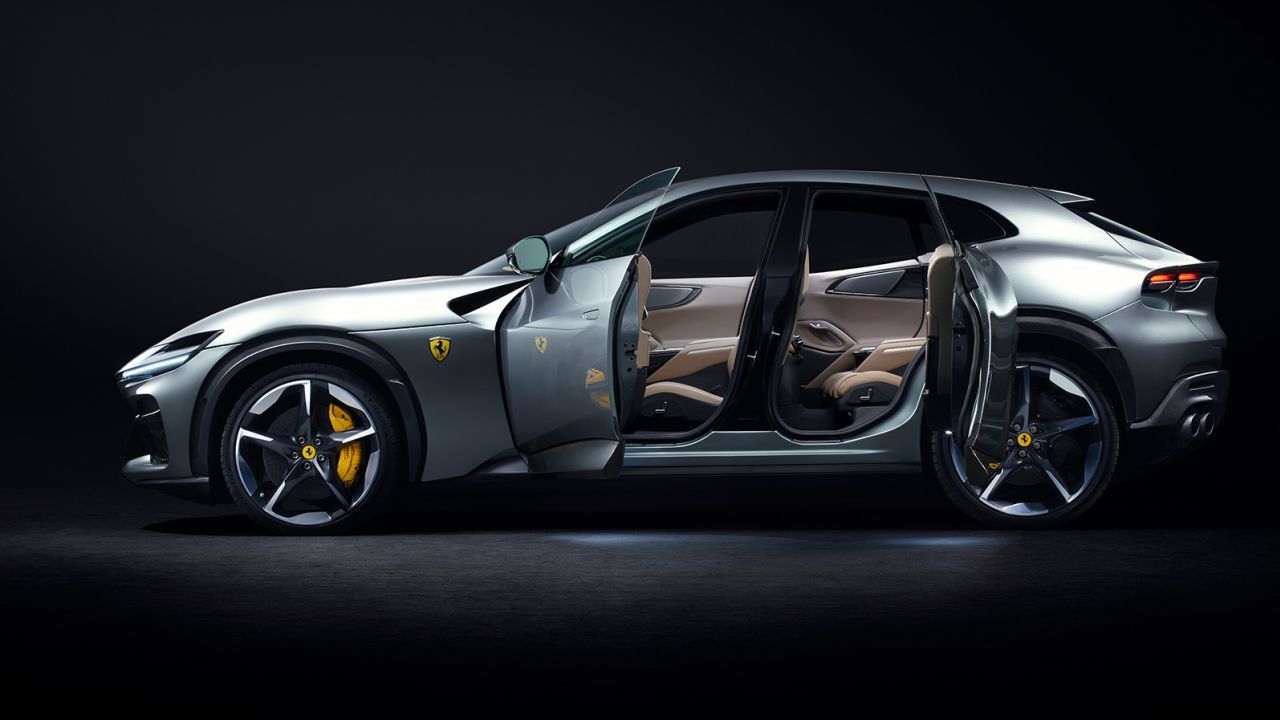 The Ferrari Purosangue has "suicide" doors in the rear.

The Ferrari Purosangue, which mans “pure blood” in Italian, looks like a crossover SUV but Ferrari isn’t calling it that. Ferrari calls the Purosangue a “car” and contrasts its engineering with that of typical SUVs. The Purosangue’s big engine, a 715-horsepower V12 of the sort for which Ferrari is famous, is carried farther back behind the front wheels than in similar vehicles to create a better weight balance, according to Ferrari.

Ferrari has made four-seat cars before, but Ferrari’s its regular production cars have been two-door models, with back seats better suited for occasional use than long trips. The Purosangue has four full-sized and fully adjustable seats, a first in any Ferrari model. Both front and back seats are also heated, and the front seats have a massage function. A special darkening full-length glass roof is offered as an option, and there’s a second screen for the front passenger “that provides all the information required to help them participate in the driving experience,” according to Ferrari. 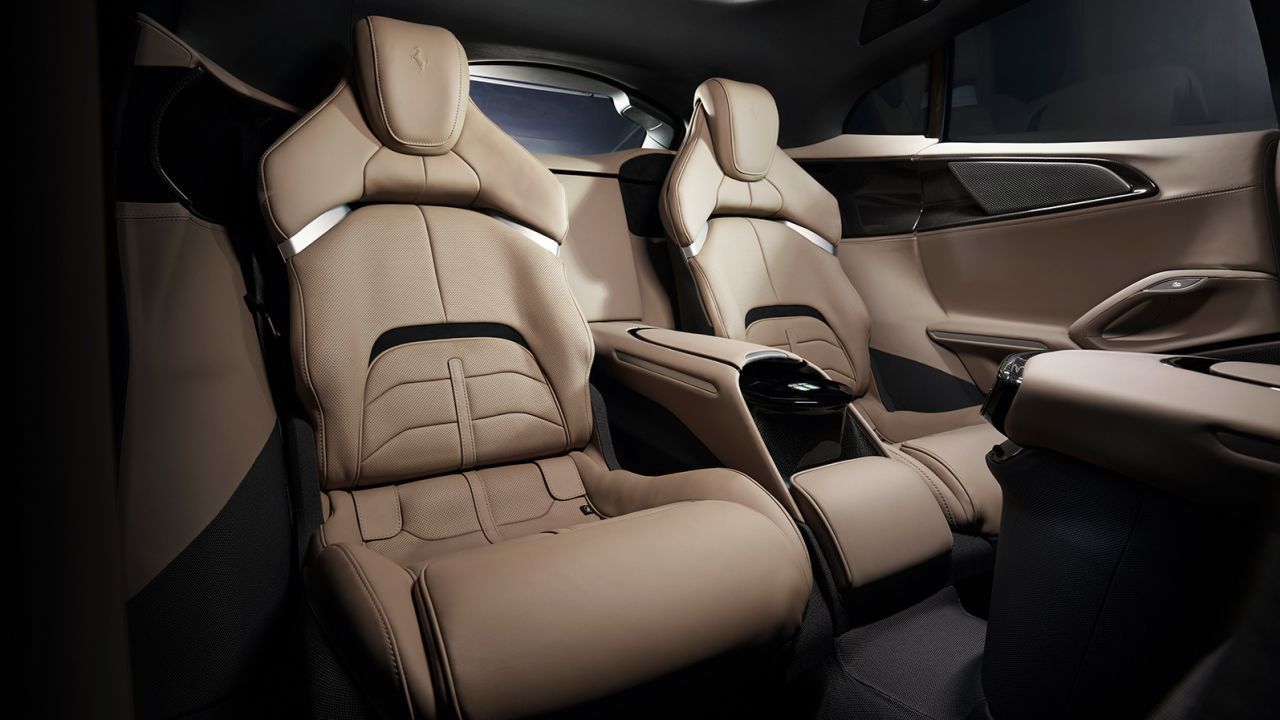 The Ferrari Purosangue gets four full-sized seats, a first for the brand in a production car.

There’s also a cupholder made of glass. And if the traditional carpet and leather of the interior trim in the standard model aren’t enough for discerning customers, Ferrari says it can replace them with “a bullet-proof, ballistic fabric used in military uniforms.”

An “active suspension system” helps keep the car’s body under control during fast, hard cornering. Its roof is made from carbon fiber to reduce weight near the top of the vehicle. which should also help reduce rolling side-to-side in turns. Much of the lower parts of the body are made from aluminum. Despite the car’s relatively high ride height (for a Ferrari), the seats are close to the floor, the company says, to help maintain the brand’s traditional low-slung driving experience. 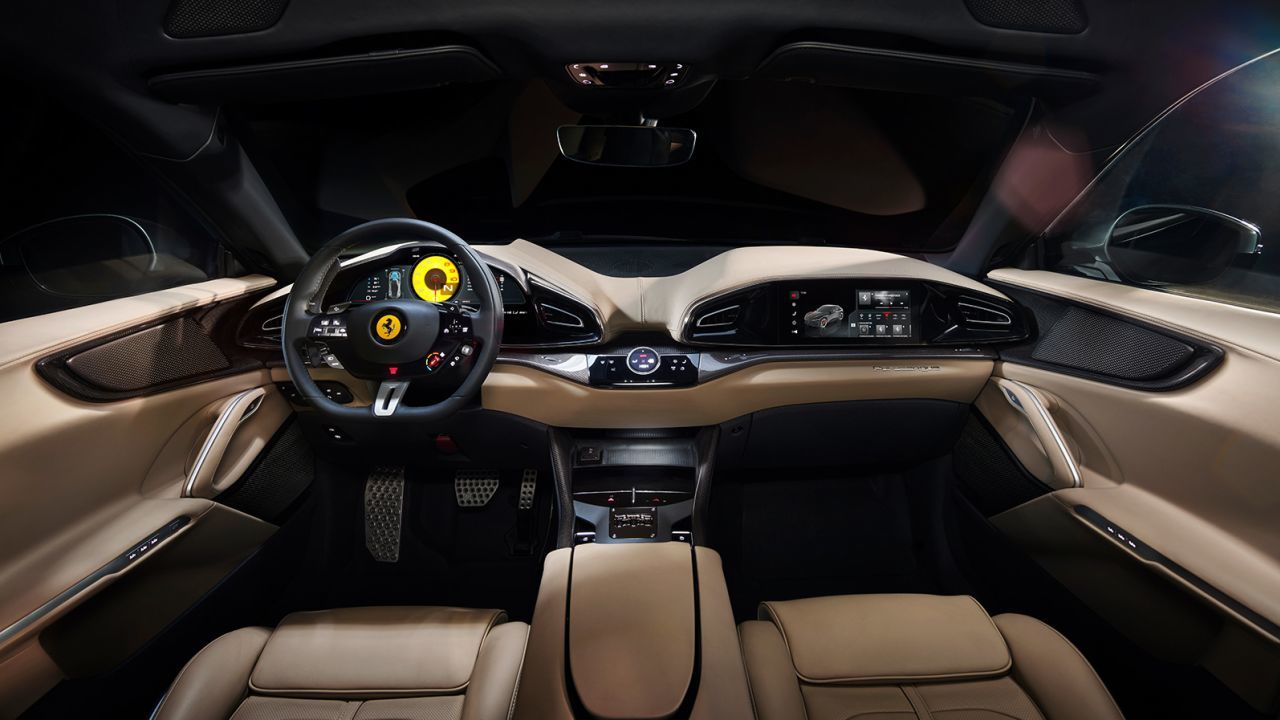 The front passenger also gets a screen in the Ferrari Purosangue.

Unlike most similar vehicles, the Purosangue has no rear windshield wiper, instead relying on airflow to keep the back window clean. The car’s narrow headlights have air intakes above and below them.

It will also offer the sort of driving experience customers expect, the company said. It will be able to launch from a stop to 60 mph in about three seconds, according to Ferrari. The engine is designed to produce as much power as possible even at low speeds, the company said. It has an eight-speed automatic transmission with two clutches to provide fast gear shifts.

Even through Ferrari isn’t calling this an SUV, virtually every other premium luxury brand – from Lamborghini to Bentley and Aston Martin – now offers a crossover SUV. This type of vehicle is considered critical to compete in this arena, especially in markets like China, where sports cars are not popular.

The first Purosangues will be delivered in the US around the end of 2023, according to Ferrari. Prices are expected to start at around $400,000.