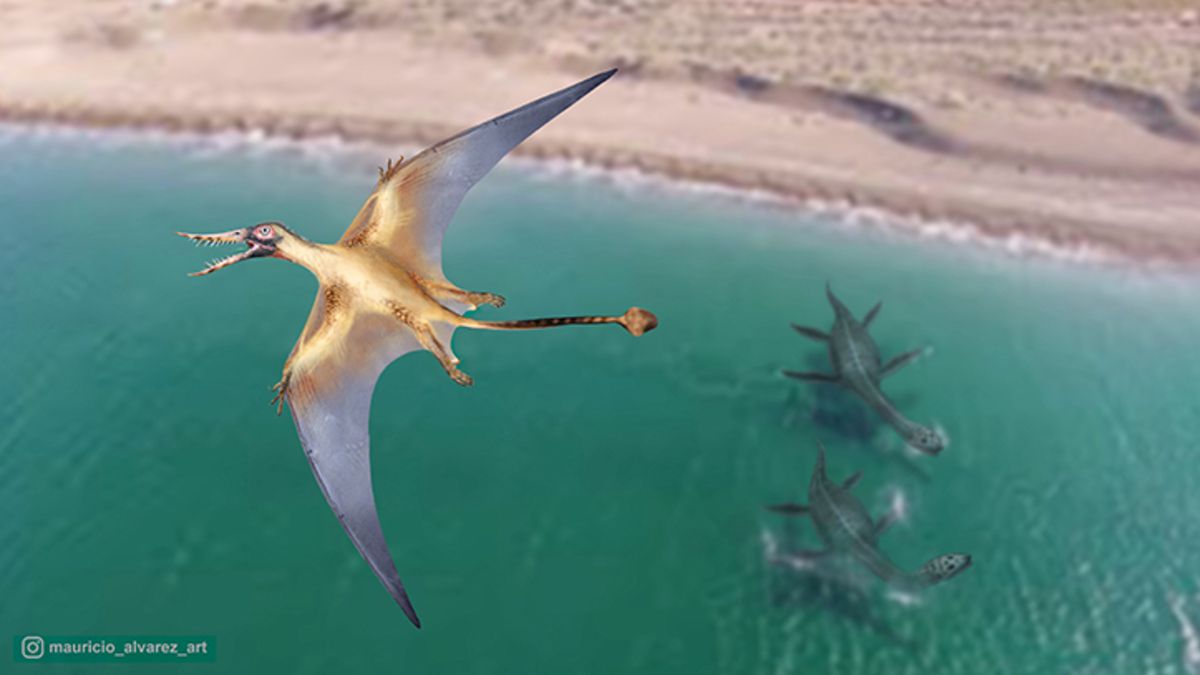 The discovery took place during an expedition of researchers from the University of Chile carried out in 2009 near the city of Calama.
An elongated tail ending in a rhombus-shaped tip and pointed forward-facing teeth are some of the peculiarities of the ranforrincos, a type of pterosaur from the Jurassic known as "flying dragon" that was first identified in the southern hemisphere of the planet, in the Chilean Atacama desert.

The discovery took place during an expedition of researchers from the University of Chile carried out in 2009 near the city of Calama, where other discoveries have been made, mainly of the marine fauna that inhabited the place at the end of the Jurassic period, when South America it was part of the Gondwana megacontinent.

After years of analysis, the University of Chile now reported that it was determined that the discovered specimen was not this time a prehistoric marine animal, but a flying reptile, more precisely a pterosaur from the Ramphorhynchinae subfamily, which inhabited this area of ​​the planet. 160 million years ago, in the Jurassic period.

The remains found correspond to "a left humerus, a possible dorsal vertebra and two fragments of a phalanx of the wing, all preserved in three dimensions and probably belonging to a single individual," explained Jhonatan Alarcón, a paleontologist who led the investigation.

According to the expert, the preserved pieces of this specimen are enough to determine that it is a large pterosaur for that time, probably very similar to the members of a group known essentially in the northern hemisphere called Rhamphorhynchinae.

"These pterosaurs had wing spans, from tip to tip, of up to 1.80 or 2 meters. Our specimen is quite large, comparable to Rhamphorhynchus, which is the largest member of this family, or perhaps the largest," said Alarcón. , according to a statement .

The paleontologist commented that these "winged dragons" were characterized by "having a very elongated tail and with a peculiar rhombus-shaped termination, they had low heads, long snouts and pointed teeth directed towards the front."

"Based on the size, especially the humerus, which looks very developed, and also based on comparisons with other specimens, we can say that it corresponds to an adult or a state very close to the adult stage," Alarcón stated.

He also added that "other bones were rescued in the area of ​​the find, materials that still have to be studied to determine whether or not this specimen corresponds to a new species, which is the most probable."

This is the first "one hundred percent confirmed" specimen of the Rhamphorhynchinae subfamily discovered in the southern hemisphere, particularly in territories of the former mega-continent Gondwana, said Alarcón, and the first Jurassic pterosaur found so far in Chile and, therefore, the oldest representative of these winged lizards in the country.

"Jurassic pterosaurs have already been found in South America, but this is the first one discovered in Chile. Furthermore, it is preserved in three-dimensional form, which is rare, since pterosaurs in general are preserved with crushed bones, since they had bones very delicate and pneumatic, adapted for air travel ", commented the expert.

The identification of this pterosaur, the first animal found in this coastal ecosystem that was not strictly aquatic, also adds information on the strong link between the fauna of Gondwana - made up of territories such as South America, Antarctica, Africa, Madagascar, India and Australia - and Laurasia - made up mainly of North America, Asia and Europe.

"This finding adds evidence to the connection that occurred between the Northern and Southern hemispheres, particularly through a Caribbean passage that existed in the Jurassic, as has already been supported by marine reptiles such as the Muraenosaurus genus, found in the United Kingdom, France. and Argentina, and Vinialesaurus, found in Cuban marine deposits ", concluded the paleontologist.