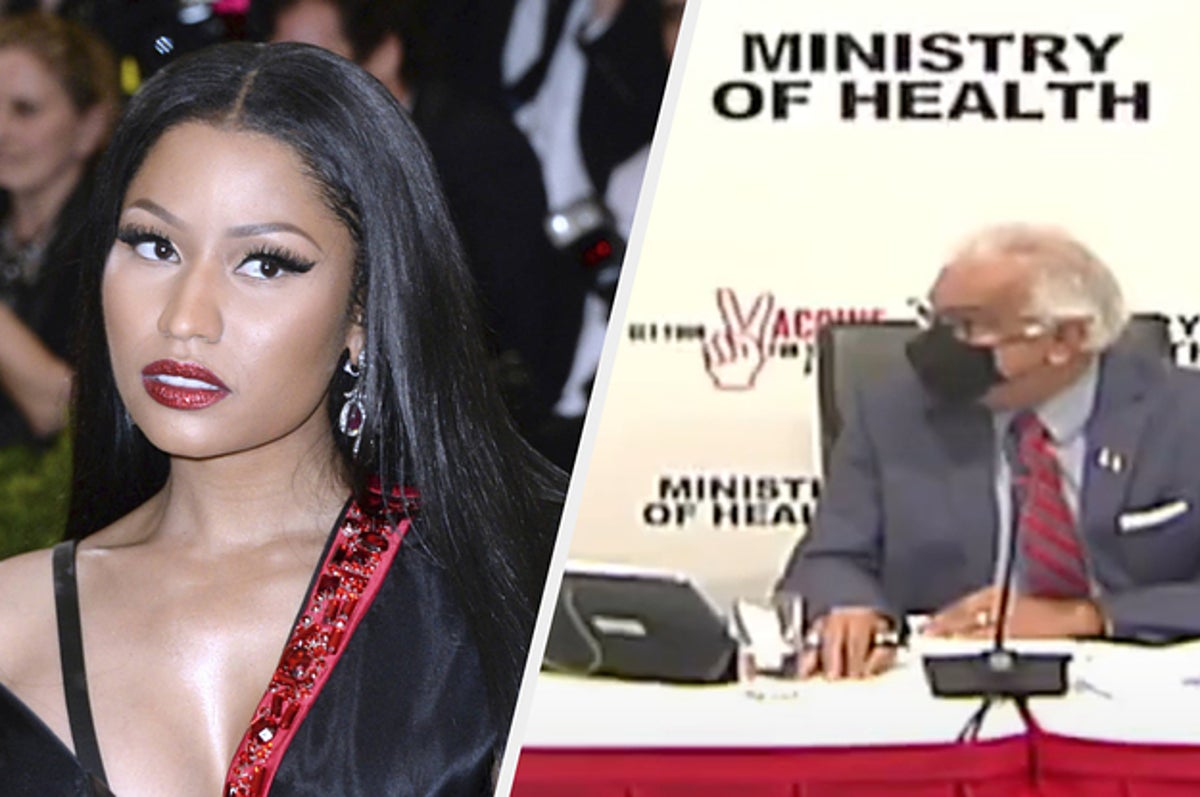 Health officials said they "wasted so much time" trying to verify the rap star's claim about swollen testicles.

Nicki Minaj's claim that a cousin's friend's testicles became swollen after taking the COVID-19 vaccine caused such an uproar that the government of Trinidad and Tobago responded directly to the startling allegation Wednesday.

Minaj's story that the cousin's friend became impotent and, as a result, had his wedding called off touched off a firestorm that spread from Twitter to late-night shows, cable news, and official government updates on the pandemic in the UK and Trinidad and Tobago.

During a televised update on COVID-19 Wednesday, health officials of the Caribbean island said they had "wasted so much time" trying to confirm or debunk Minaj's claim, spending most of Tuesday trying to find out if there had been a case of swollen testicles in the island.

"As we stand now, there is absolutely no reported such side effect or adverse event of testicular swelling in Trinidad," Trinidad and Tobago Health Minister Dr. Terrence Deyalsingh said Wednesday morning. "Unfortunately, we wasted so much time yesterday running down this false claim."

Deyalsingh's confirmation that there have been no such reported claims come as health officials across the world continue to fight disinformation and false claims about the COVID-19 vaccines, which health officials have repeatedly said is the best way to fight the ongoing deadly pandemic.

The uproar began Monday after Minaj tweeted that attendees for the Met Gala were asked to be vaccinated, and the rap star confirmed she had not received the shot.

Minaj said she wouldn't be vaccinated until she felt she'd "done enough research" and encouraged people to wear masks.

Then she followed up with a tweet claiming that her cousin was not vaccinated because a friend allegedly "became impotent" after getting the shot, and his fiancé called off their wedding as a result.

In the tweet, Minaj became the most recent celebrity to cast doubt on the safety of the vaccines, relaying the story about how the friend's "testicles became swollen" and telling people to "make sure you're comfortable with ur decision."

However, the CDC and several independent studies have found COVID-19 vaccines are safe as well as effective in preventing infection, reducing the chances of severe symptoms in breakthrough cases.

Other studies have found none of the vaccines have created fertility or sexual problems.

During the Wednesday press conference, Deyalsingh said health officials have found no recorded incident in Trinidad and Tobago, or anywhere else in the world, of testicles getting swollen because of the vaccine.

Minaj has so far stood by her comments, even after the tweet became fodder for late-night comics and garnered international headlines.

Online sleuths inquired who "the friend" might be with no success. Even Fox News host Tucker Carlson — who has spread misinformation on vaccines as well — made an appeal for "the friend" to reach out to the show.

In the United Kingdom, Chief Medical Officer Chris Whitty and Prime Minister Boris Johnson were asked about her comments during the country's COVID-19 briefing.

Whitty said the rapper "should be ashamed," and Johnson claimed he was not very familiar with her work.

Meanwhile on Twitter, Nicki Minaj later said she'll likely be vaccinated in the future because she has "to go on tour, etc."