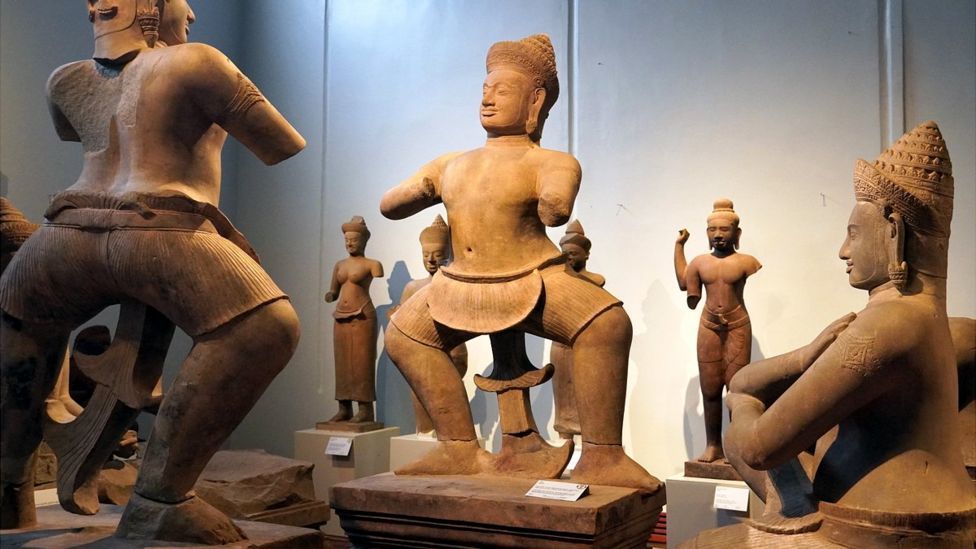 Cambodia is calling on the UK government to help it recover antiquities it says were stolen from its temples.

The country's culture minister says the Victoria & Albert and British Museums both have looted objects.

The museums said they were transparent about items' origins.

The V&A welcomed "constructive dialogue". The British Museum said it would consider requests "carefully and respectfully".

In a letter to her British counterpart Nadine Dorries, Cambodian culture minister, Phoeurng Sackona, says many important cultural treasures were stolen from sacred temples and "wrongfully ended up" in warehouses and institutions - including the two London museums. 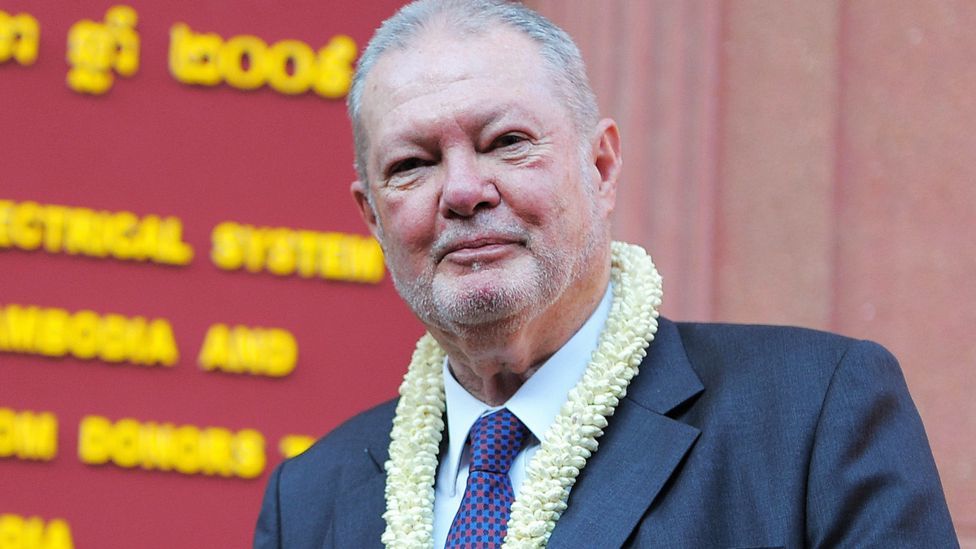 The Cambodians - who believe ancient statues hold the souls of their ancestors - have pinpointed that many of the stolen works passed through the hands of a rogue British art dealer, Douglas Latchford, who died in 2020.

The focus on the UK marks the latest phase in the Cambodians' campaign to recover the country's most precious carvings and statues that were pillaged and then sold on to Western museums and private collectors.

The Cambodian Ministry of Culture's chief legal counsel and the head of its investigative team, Brad Gordon, told the BBC that the trade in these items could be considered a war crime. The Cambodian minister's letter reminded the UK that both countries were party to the Hague Convention, which aims to protect cultural property during armed conflicts.

The murderous Khmer Rouge regime held power from 1975 to 1979, when it is thought to have killed more than two million of its own people, and the group controlled large portions of the country until the late 1990s. Much of the looting took place over this three-decade period of civil war and strife.

"This was a time of conflict. The whole world knew it," Brad Gordon says. "Large museums like the British Museum or the V&A, they shouldn't have accepted these pieces." 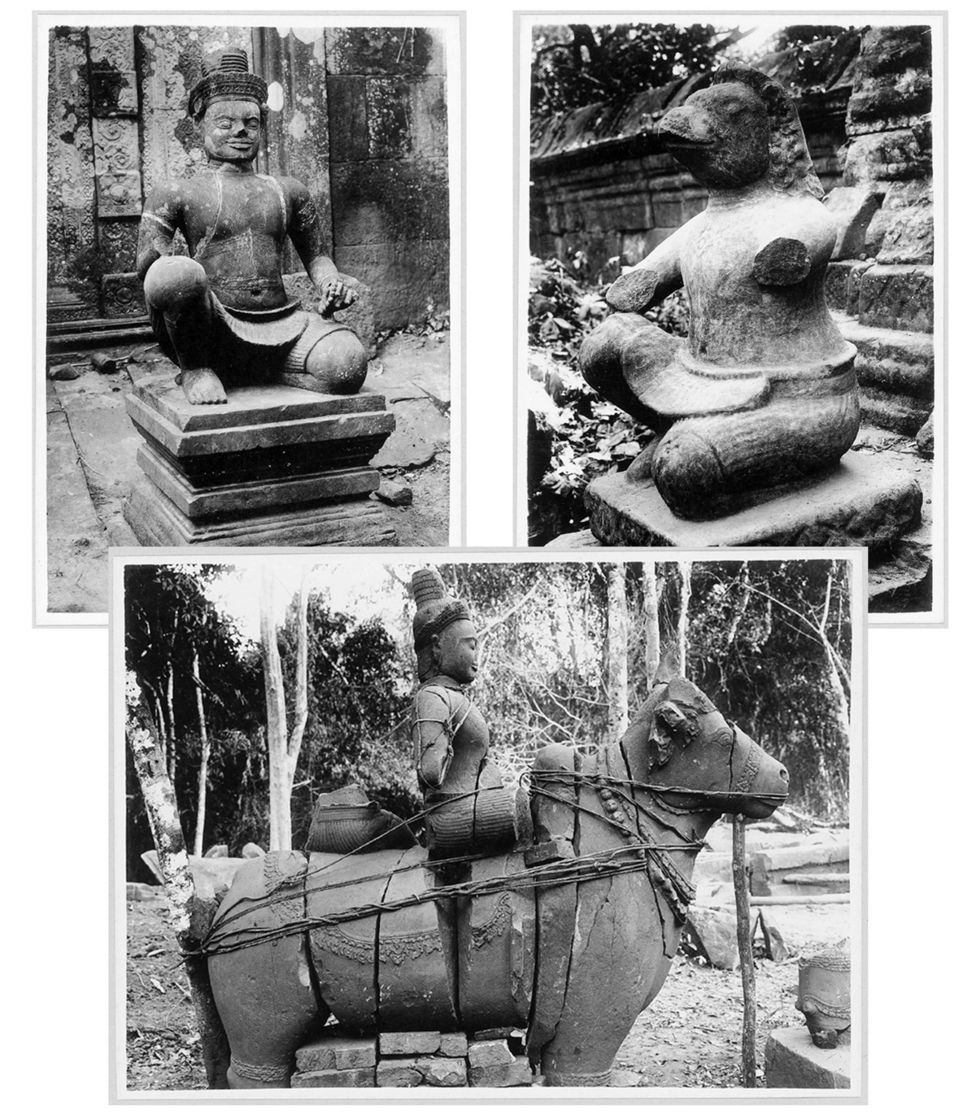 Before the looting - archive photos of the Koh Ker archaeological site

The two London museums have now each received a list of the items that the Cambodian authorities believe they have in their collections. The British Museum is believed to have approximately 100 Cambodian pieces, though all appear to be in storage.

Some of the museum's pieces rank near the top of the Cambodians' priority list for return. The V&A is thought to have more than 50 items; a fraction of them are on display.

In a statement, the British Museum said: "We are open and transparent about the heritage of objects in our permanent collection. Establishing the provenance of an object has been an integral part of the Museum's acquisition process for decades. Through this research, we also endeavour to find any possible ethical or legal issues. Each object goes through a careful and thorough process before the Trustees make a decision to acquire it."

The V&A told us it took steps to ensure as much information as possible about V&A objects was available to researchers.

It continued: "Information about our Cambodian objects, including their provenance, has been accessible on our online database since its launch in 2009. Research into our collections is continuous and new information is added to the database."

Both museums said they would respond to the Cambodians' letters. 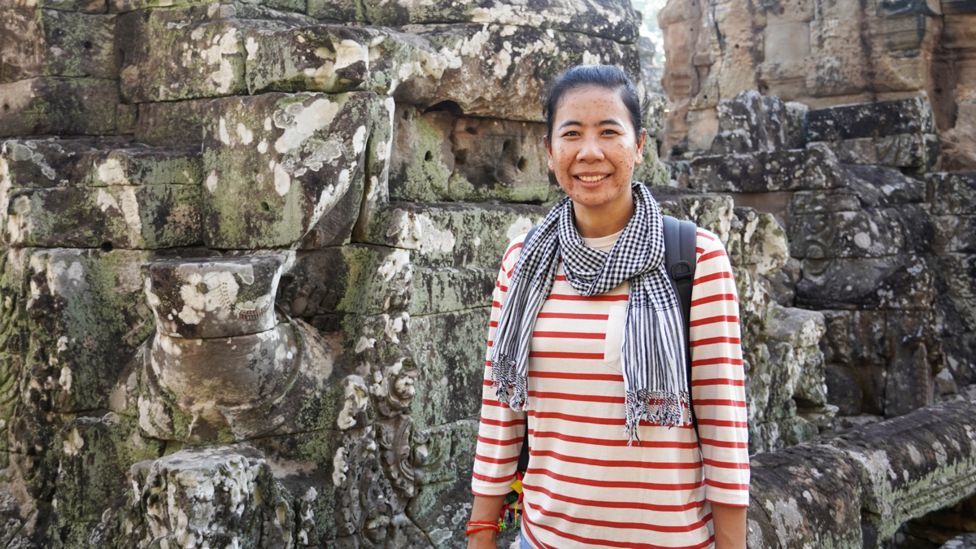 "The statues are definitely not just the stone for us. We believe the statues have souls," explains Sopheap Meas, an archaeologist on the investigative team.

Seeing the temples' statues broken into pieces makes Sopheap feel nauseous. She explains that to Cambodians, a statue can contain the soul of a king, a god or maybe an ancestor.

"So when the head was cut and the foot, the leg was destroyed, it's just like people and somebody cut off their heads."

This wasn't a colonial crime. In contrast to the Elgin Marbles taken from Greece or the Benin Bronzes removed from what is now Nigeria, much of the looting of Cambodian items took place in living memory - in the 1980s, 90s and early 2000s.

The BBC was given exclusive access to former looters who stole items from Cambodian temples.

They've all been given code names by the Cambodian investigative team to protect their identities from others who might not be happy they're being so open about their past activity. 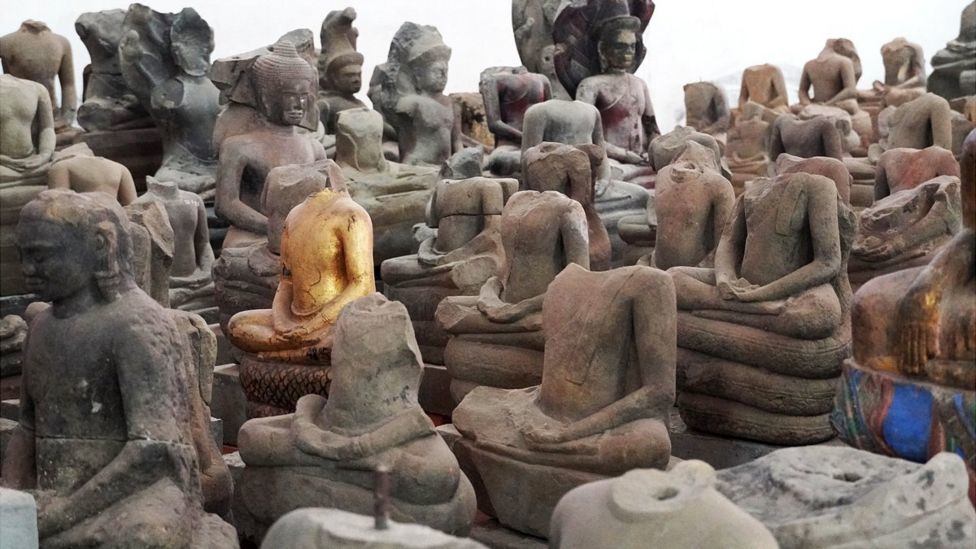 Statues in a secret warehouse in Cambodia, to protect them from looters

One looter, known as Iron Princess, says she worked almost every day in the 1990s to systematically dismantle one of Cambodia's biggest temple complexes, Preah Khan Kampang Svay, in the north of the country.

"At the time there was no other work to do besides looting," she explains.

"Because there were so many traders, we sold to whoever paid the most," she adds.

After being shown a catalogue of Cambodian items that are held by the V&A in London, Iron Princess picks out several artefacts, including bronze and sandstone statues, that she says she removed from the remote temple complex, Preah Kahn Kampang Svay.

Another former looter, known as Red Horse, takes us to a remote temple near northern Cambodia's Kulen Mountain. There, he shows us the place where he says his gang removed a large male deity statue in the 1970s. He clearly identifies it in the British Museum catalogue.

"We dug down and lifted it out, two people on each side," he says. "Then we used a stretcher [to carry it]."

Cambodian investigators have carefully traced the statue's journey. They're confident the one Red Horse identifies matches the artefact held by the British Museum.

This is just one story - there are thousands of others. In targeted excavations at temples across the country, archaeologists look for evidence to back up the looters' stories. They also search for left-behind fragments that might match statues in foreign museums. 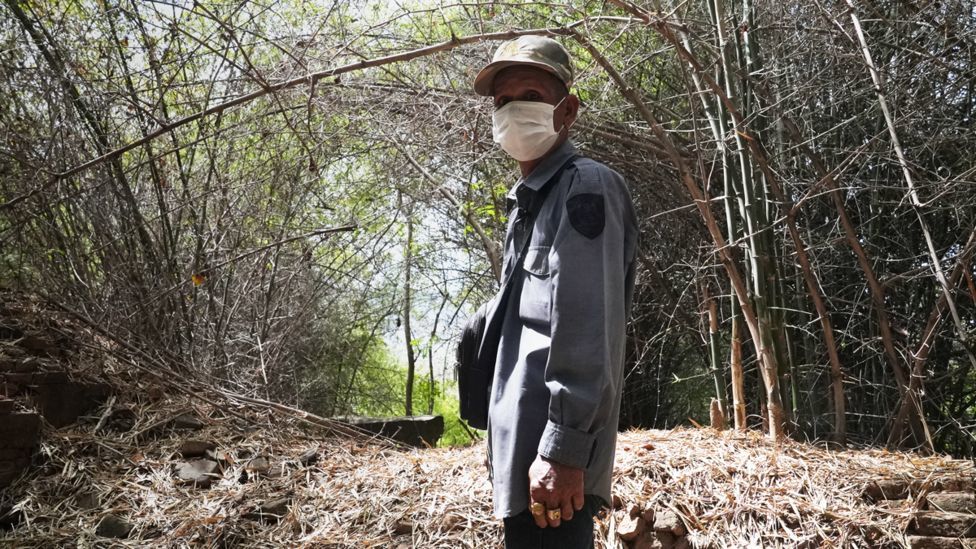 That strategy has worked. In 2014, two of Cambodia's most-wanted statues, a pair of warriors, were returned to Phnom Penh after French archaeologists matched pedestals with feet to statues in US collections.

American prosecutors have been actively targeting US museums and collectors, asking them to justify their Cambodian acquisitions.

Iron Princess and Red Horse both sold most of their finds through a Cambodian man named Lion. He was sick with cancer when Cambodian investigators made contact with him, but he worked with the team right up to his death last year.

It's through Lion that the team really began to understand how the system operated. There were two men who masterminded the selling off of treasures in the 1980s and 90s: Lion and Douglas Latchford. The British art dealer was so prominent that the Cambodian minister of culture has named him in her letter to the UK, noting that many stolen objects passed through his hands. 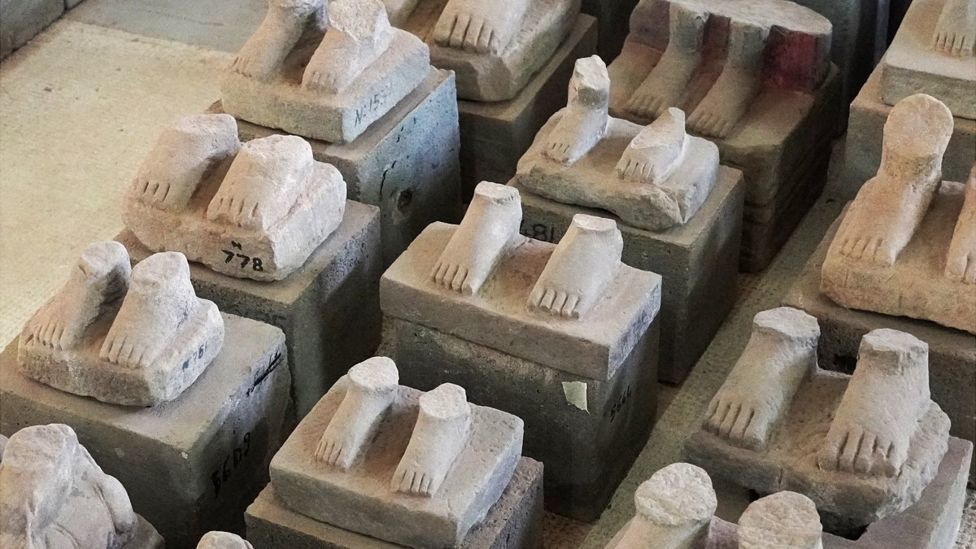 Bases of statues taken by looters

Outwardly, Latchford presented himself as an expert on Cambodian art, even publishing several large art books full of glossy photographs of items in Western collections. However, many had suspicions that he wasn't operating above board. Where were all these Cambodian works coming from in the later decades of the 20th Century, right when the country was consumed by violence?

Douglas Latchford always claimed his business was legitimate. He also insisted that if the statues had not been removed from Cambodia they would most likely, as he put it, have been shot up for target practice by the Khmer Rouge.

In 2012, he was mentioned by US prosecutors in a case targeting New York dealers. 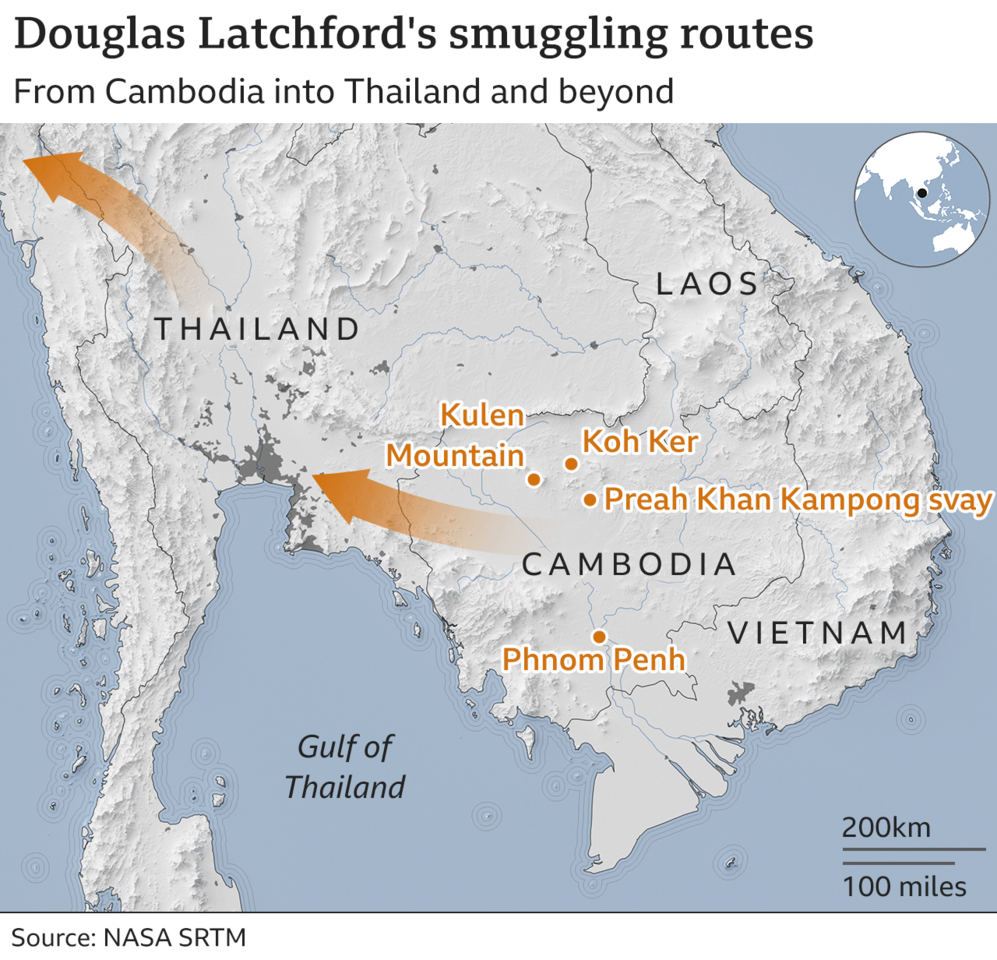 US prosecutors closed in on Latchford himself. In 2019, he was subjected to his own indictment - 25 pages detailing his alleged crimes, from smuggling to selling stolen antiquities. He died the following year, before going to trial.

Latchford's family has supplied a vast trove of shipping records and emails to the Cambodian authorities. The documents confirmed many of the suspicions about him. Brad Gordon says Latchford was double-dealing right until his death.

"He was trying to offload his collection right up until he went into the hospital right before he died," Brad Gordon says of Latchford. 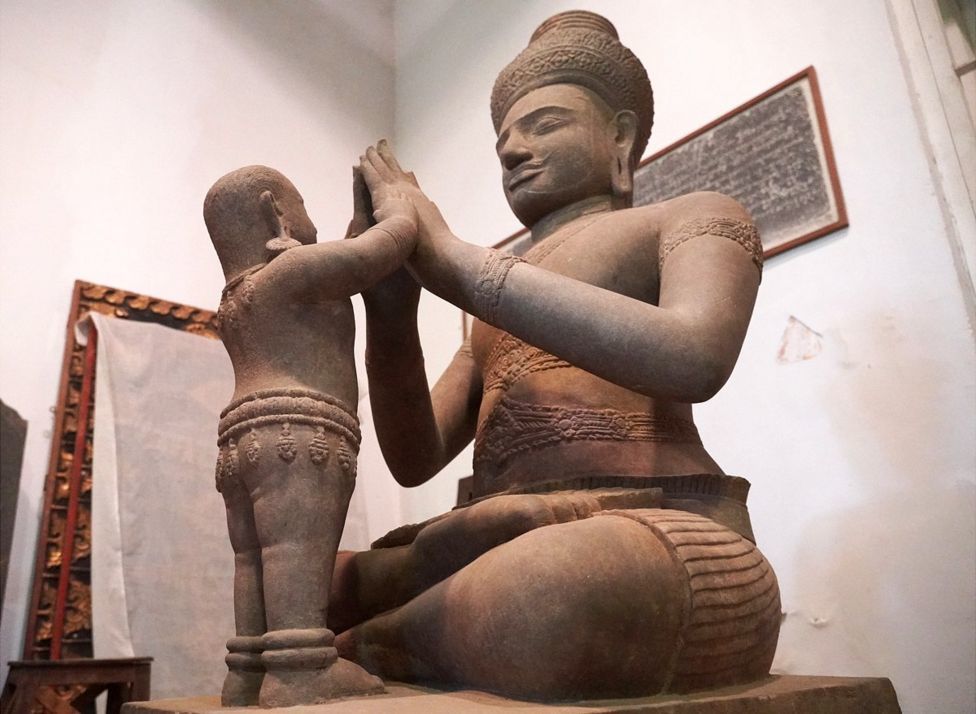 Douglas's daughter, Julia Latchford, stresses that legal ownership of the entire collection has been transferred to the Cambodian authorities. So far five major objects from Latchford's private collection have been physically repatriated, with a promise to return the rest.

Some in Cambodia have become tired of waiting. They want their gods to return home.

There are those, like the archaeologist Sopheap Meas, who would ideally like to see statues back in their original temples.

"I think the statue [was] just made for here," she says, gesturing to empty temples behind her, in the Preah Khan Kampang Svay complex. "They need to come back to our country, our people because people need to pray." 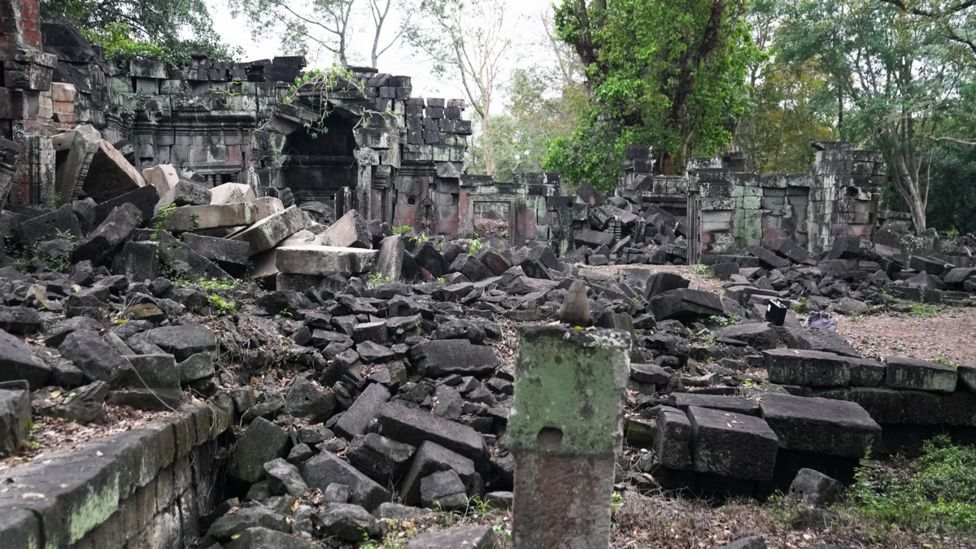 Many in Cambodia would love to see their temples fully restored. But the country simply doesn't have the museum space or resources to take everything back. They have a priority list of the most important pieces they want returned immediately.

They say they're not looking to empty Western museums of all Cambodian treasures. What they do want is institutions like the British Museum and the V&A to change their signs - acknowledging that these objects belong to the people of Cambodia.