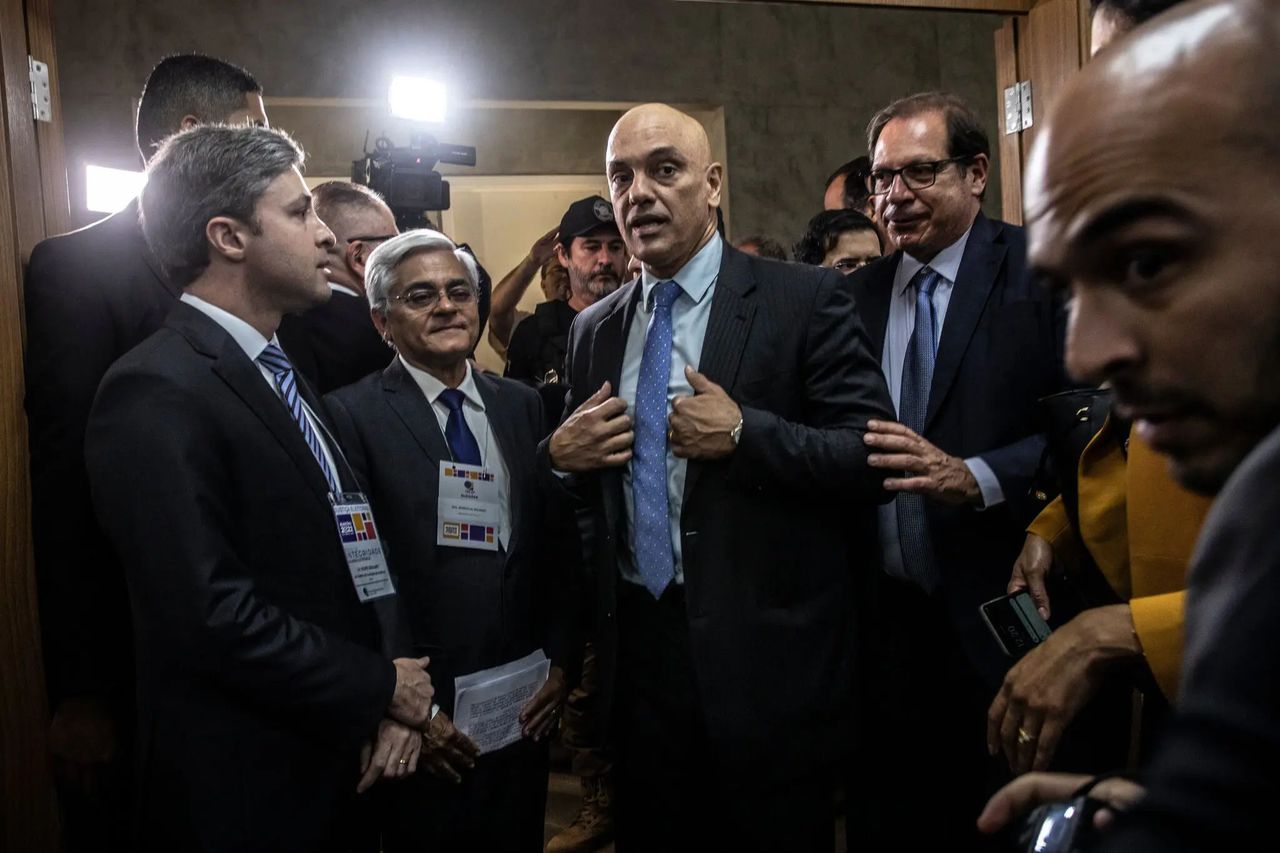 The NYT profiles what is probably the most abusive judge on the planet: Alexandre de Moraes of Brazil's Supreme Court.

In the fake name of law and order, he's imprisoned a Congressman, forced bloggers into exile, closed entire apps, and now is the sole power to remove "fake news" online. This is yet another reminder that judges are not God, not even democratically or professionally elected, and in too many cases around the world, they are just a corrupted or devils as any other humans with unlimited power and zero accountability. Not all of them of course and probably not most of them, but too many example from too many countries with different political and legal system says it clear: power corrupts, and absolute power corrupts absolutely.


Brazilian authorities granted the country’s elections chief broad power to order the takedown of online content in a bid to combat soaring misinformation ahead of this month’s election.

Brazilian authorities, grappling with a torrent of online misinformation ahead of the country’s presidential election, granted the nation’s elections chief unilateral power to order tech companies to remove many online posts and videos — one of the most aggressive actions taken by any country to combat false information.

Under rules passed on Thursday, the elections chief can order the immediate removal of content that he believes has violated previous takedown orders. Social networks must comply with those demands within two hours or face the potential suspension of their services in Brazil.

The move culminates an increasingly assertive strategy by election officials in Brazil to crack down on divisive, misleading and false attacks that have flooded the country’s presidential race in recent days, including claims that candidates are Satanists, cannibals and pedophiles.

But by allowing a single person to decide what can be said online in the run-up to the high-stakes election, which will be held on Oct. 30, Brazil has become a test case in a swelling global debate over how far to go in fighting false and misleading reports.

The decision drew outcry from supporters of right-wing President Jair Bolsonaro, as well as concern from many internet-law and civil-rights experts, who said it represented a potentially dangerous, authoritarian expansion of power that could be abused to censor legitimate viewpoints and swing the presidential contest.

The elections chief, Alexandre de Moraes, is also a justice on Brazil’s Supreme Court, which has placed him at the center of a separate fight over the court’s increasing authority.

As a court justice, he has ordered investigations into Mr. Bolsonaro and jailed some of the president’s supporters for what Mr. Moraes said were attacks on the nation’s democratic institutions.

He has been perhaps the nation’s most effective check on Mr. Bolsonaro, who for years has assailed the press, the courts and the nation’s elections systems. But in the process, Mr. Moraes has raised concerns that his efforts to protect the country’s democracy have instead eroded it.

Still, the move was cheered by many in Brazil who see it as a necessary tool to fight an avalanche of false claims from Mr. Bolsonaro’s supporters that has only accelerated in recent days.

The new rules were passed unanimously by seven federal judges who make up Brazil’s electoral court. When he proposed the rules at a court session on Thursday, Mr. Moraes said complaints about misinformation had increased nearly 17-fold compared with past elections.

“There has been a proliferation of not only false news, but of the aggressiveness of this news, this hate speech, which we all know leads to nothing but an erosion of democracy,” he said. “This is precisely why we need a faster way.”

Another judge, Carmen Lucia, said during the hearing that she was worried about the implications of the electoral court’s recent moves to battle misinformation. “The return of censorship cannot be allowed under any argument in Brazil,” she said.

In an interview with a podcast on Thursday, Mr. Bolsonaro said election officials were sending Brazil toward a “dictatorial state” and that “after the elections, depending on who wins, we’re going to put an end to this.”

Mr. Bolsonaro faces off on Oct. 30 against the leftist former President Luiz Inácio Lula da Silva in a vote that is widely regarded as Brazil’s most important in decades and a key test of one of the world’s biggest democracies.

Under the new internet rules, the elections chief’s expanded powers are effective during election campaigns. The powers will lapse after the presidential vote but will take effect again in future campaigns.

The rules allow Mr. Moraes to order social networks to immediately take down content that he determines has violated previous decisions by the broader electoral court.

The electoral court has already banned posts that have called Mr. Bolsonaro a pedophile, a claim that accelerated in recent days after video emerged of the president saying “there was a spark” between him and two teenage girls. The court has also ordered the takedown of content that says Mr. da Silva is corrupt. Mr. da Silva served time in prison on corruption charges, which were later nullified.

Camps on both sides have spread lies, but the volume of misleading information on the right has far outweighed that on the left, said Tai Nalon, director of Aos Fatos, a Brazilian fact-checking organization that has closely tracked false campaign claims.

Mr. Bolsonaro’s supporters have spread the lie that Mr. da Silva plans to close churches if elected, prompting the former president to release a public letter insisting that he would not. On Friday, many on the right began posting images falsely claiming they were being directly censored by election officials.

Mr. Bolsonaro has also attacked Brazil’s electronic voting machines as rife with fraud, despite a lack of evidence, and his supporters have spread baseless conspiracy theories that claim the left is planning to steal the election.

Mr. da Silva led Mr. Bolsonaro by five percentage points after the first round of voting, but in recent days, polls suggested that the gap is narrowing.

This week, the electoral court restricted one of Brazil’s largest news outlets from describing Mr. da Silva as corrupt, and it blocked a prominent right-wing YouTube channel from posting a documentary on a 2018 assassination attempt against Mr. Bolsonaro. Mr. Bolsonaro and his supporters have accused the court of trying to advantage Mr. da Silva.

Despite the electoral court’s efforts to intervene, false and misleading content has proliferated, illustrating the struggle officials and tech companies face in reining in misinformation that spreads faster than they can act and that increasingly is being shared beyond their reach.

For instance, much of the misinformation in Brazil is shared on WhatsApp, by far the most popular app in the country. Because WhatsApp is encrypted, the company and officials cannot see messages that users share with each other, complicating their ability to combat false information.

WhatsApp has changed its app to slow the spread, including placing limits on group sizes and the number of times a message can be forwarded, but misinformation remains an issue, researchers said.

Under the new rules, if a tech company repeatedly refuses to comply with Mr. Moraes’s orders, he can “suspend access to the services” of the platform in Brazil for up to 24 hours.

Earlier this year, Mr. Moraes said he planned to block Telegram, the messaging service with millions of users in Brazil, after the company did not follow his orders to remove the account of a prominent supporter of Mr. Bolsonaro accused of spreading disinformation. (Mr. Moraes was acting then in his capacity as a Supreme Court justice.) Mr. Moraes reversed that ban several days later after Telegram agreed to changes.

Mr. Affonso Souza, the law professor in Rio de Janeiro, said that given the two-hour deadline to comply with Mr. Moraes’s orders — and just one hour on the eve of the election — Mr. Moraes could conceivably try to block a platform in the final days of the campaign. “That would definitely add fuel to the fire for Bolsonaro’s supporters,” he said.