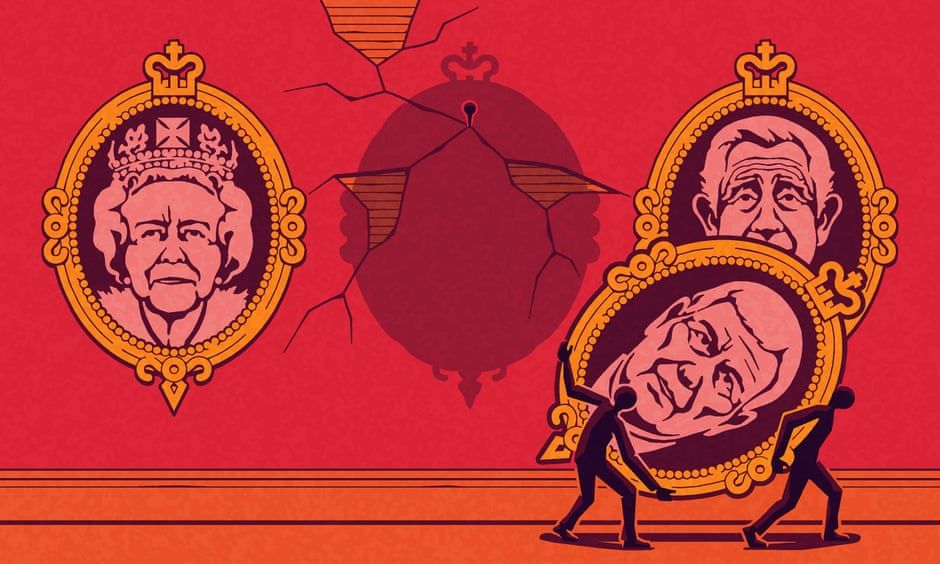 This started as a scandal about one man’s behaviour. It could end up a story about the kind of country we choose to be
If a uniformed flunkey holding aloft a vellum scroll had stood in front of Buckingham Palace and read it out for the benefit of the world’s cameras on Tuesday afternoon, the message from the official proclamation would have boiled down to this: “The royal embarrassment is over. Long live the royal embarrassment.”

This week’s out of court settlement of Virginia Giuffre’s sexual assault claims against Prince Andrew is not the tidy closure of a tawdry affair. The sleazy content of the allegations and the prince’s boneheaded response to them have not merely discredited him personally – though they have done that so conclusively that only someone as obstinate as he is could think otherwise. They have also shaken the monarchy itself, and at an extremely delicate time – one that is certainly not over yet and that may continue for at least a decade.

The Andrew affair is significant from several angles. Most importantly, from one perspective it is a paradigm case of a privileged man exploiting a young and powerless woman for sex and trying to get away with it (he has always denied the allegations made against him, and did not admit responsibility in the settlement). Hardly less dramatically but in an entirely different way, it is also the very public fall from grace of the respected monarch’s own son, a man who spent the first 22 years of his life as second in line to the throne after his older brother, only a heartbeat away from being this country’s next head of state.

But the affair is also something else. It is a reminder that the institutions of the British state – which very much includes the monarchy itself – may be rather less enduring and secure than they often seem, and a bit more fragile and vulnerable than most of us sometimes think. There is absolutely no doubt that Andrew’s stupidity over the case did serious reputational damage to the monarchy. And no doubt, either, that this is how the Queen came to see it too. But that’s not necessarily the end of the matter.

The reputational danger will clearly diminish now the lawyers have struck a deal that prevents Andrew appearing in court. But it does not disappear entirely. There may be other legal proceedings in the United States. The British media are hunting the financial settlement, said to be worth at least £12m. There are already serious questions about who, possibly including the UK taxpayer, will pay for it. Andrew, 62 on Saturday, is meanwhile doomed to live out a life of ageing notoriety, perhaps as a disgraced exile in the Gulf, like the former King Juan Carlos of Spain, but still likely to want to show up on important royal events like weddings, funerals and coronations.

How much does all this really impact on the monarchy more generally? The modern monarchy has, after all, lived through difficulties before, from marital breakups, the turbulence of the Diana years and, most recently, the self-exile of the Sussexes. So you can certainly take the view that the British public’s respect for the institution is strong and resilient enough to allow it to see off yet another royal family difficulty – even one as disreputable as Andrew’s.

This doesn’t, though, tell the whole story. For one thing, it ignores the institutional mentality. The monarchy has a history of being more nervous about its own position than you might think. George V, a century ago, turned a deaf ear to the pleas for exile from his first cousin, the toppled Tsar Nicholas II, after the 1917 revolution because he feared Britain’s monarchy might follow those of Germany, Austria, Turkey and Russia into the dustbin. The king’s private secretary advised him there could be an uprising against the monarchy if the Tsar was allowed in.

George V also feared for the crown’s vulnerability from its own members. “David will let the whole show down, you’ll see,” he said, referring to his son, who ruled briefly and disastrously as Edward VIII in 1936. “London is dividing into Roundheads and Cavaliers; division is certain and only the Socialists can gain,” commented the diarist Chips Channon, readably wrong as always. Nevertheless, Edward’s abdication still casts a traumatic shadow over the monarchy today.

The Queen has managed to protect the institution for the past 70 years, although not without challenges, notably the annus horribilis in 1992 (when a succession of family members also “let the whole show down”) and the public outpourings after the death of Diana, Princess of Wales, in 1997. Throughout these years, support for Britain’s monarchy remained strong, at well above 70%. Today, though, that has slipped. Disreputable royals like Andrew are one cause of that.

The latest Ipsos Mori survey on the subject, in November 2021, showed 60% for Britain remaining a monarchy, with 21% favouring a republic and 19% don’t knows. That is still a strong position, but it is a notable decline. It has come, moreover, at a time when the Queen’s own popularity remains undiminished. In a YouGov survey last week, Elizabeth II’s favourability ratings were 84% positive against 11% negative.

When the Queen eventually goes, however, things could be very different. That same YouGov survey last week shows how. In these findings, Prince Charles is on 60% positive against 32% negative (Andrew is on 6% against 86%, which tells you why they would be crazy to bring him back into the fold). Prince William, on the other hand, is on 80% against 14%, with Prince Harry 36% against 56%.

It is not hard to see what will start to happen after the Queen’s death, and perhaps even before it. Newspapers that have always had it in for Charles will commission polls asking if the public would prefer William to succeed. The public will say yes. The monarchy will find itself sliding into becoming the object of controversy from which Elizabeth has, by and large, insulated it. Its vulnerability will be exposed and tested, not least among younger people.

If you want to make that prospect a little spicier, imagine it happening at about the same time that the future unity of the new monarch’s kingdom is itself under challenge. Suppose Northern Ireland is facing a referendum on unification, or Scotland a vote on whether to go independent. Neither is at all unthinkable within the next decade.

It will be hard for the monarch, in theory a force for unity, not to be drawn in; hard too for the public and for politics, where an anachronistic taboo on discussion of the monarchy has existed for too long, not to be drawn in too. Hard – but also good. The Andrew affair may have started life as a scandal about one man’s behaviour. It could all too easily become a story about the kind of country we choose to be.
#Prince William