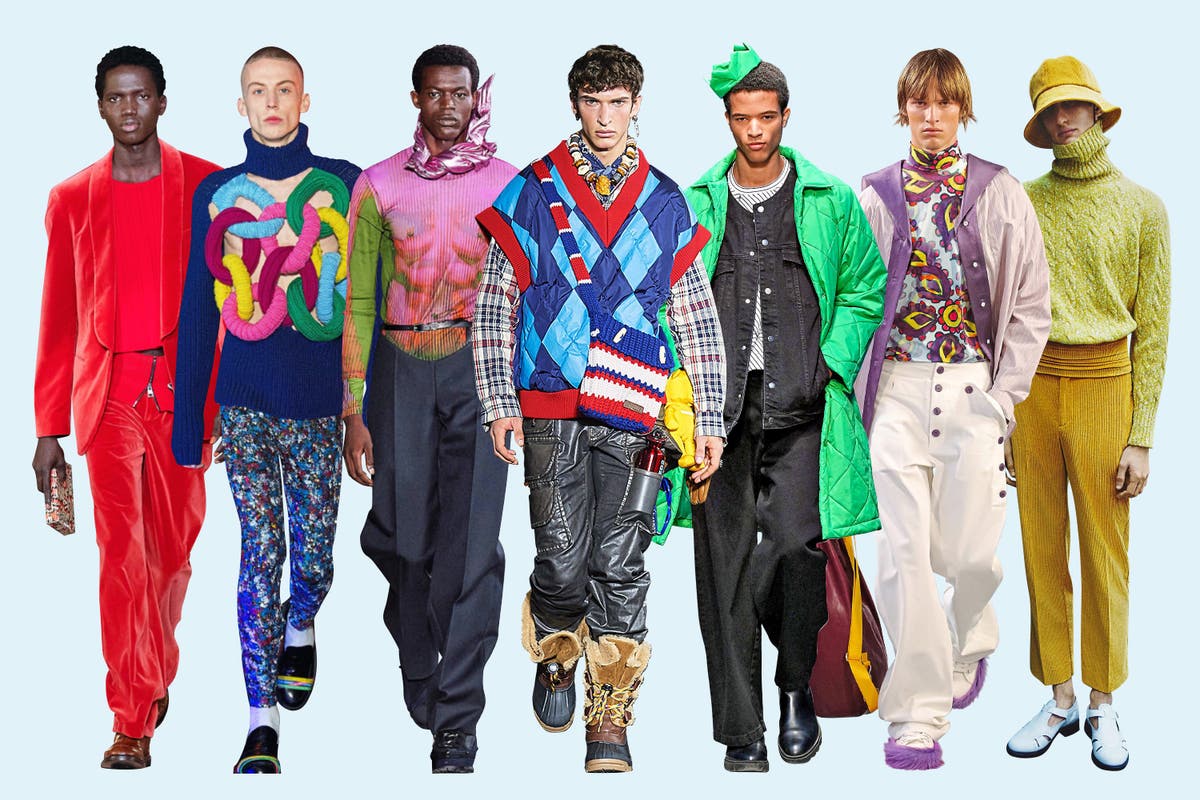 Crowns! Cummerbunds! Crazy cut-up sweaters! From the catwalks of Milan to Paris, Joe Bromley looks back at the trends to know

Menswear month has wrapped up, and the designers have given their best for the boys to wear next winter.

As always, the clothes came with the buzzy and meme-worthy as well. There was drama in Milan thanks to Prada’s A-list actor set: Kyle MacLachlan opened the show, Jeff Goldblum waltzed down to close, and rising stars Asa Butterfield and Filippo Scotti were spotted in the mix. 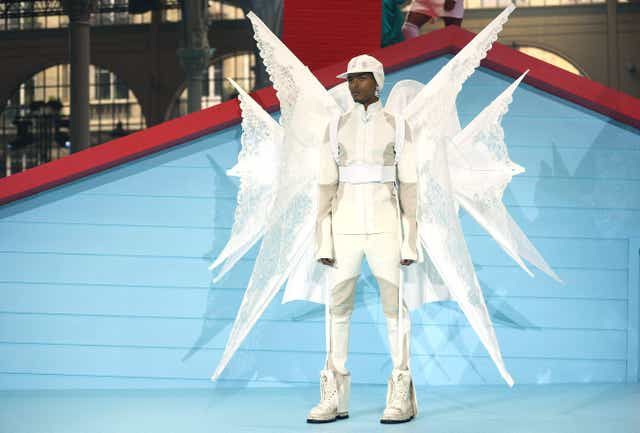 Gender-specific shows feel a bit archaic now - London Fashion Week Men’s was cancelled, and combined for a bumper LFW in mid-February - but those that did show in Milan and Paris this month found ways to make it work. Y/Project, Ami and Alyx all mixed in womenswear on their runways, while Acne Studios shot its men's’ lookbook entirely on female models. “It’s about looking beyond gender,” says Acne creative director Jonny Johansson. “For me, the point of having a brand is to think about possibilities, and to push forwards.” Boys (girls, everyone), here are the trends to rock next season.

The pleated waistband is no longer bound to black tie dressing. Erdem, who debuted his menswear line with a London-shot lookbook, set the style making them moss green atop matching trousers, or canary yellow with cable knit jumpers and bucket hats. “[They] came from my AW20 womenswear collection,” the British designer says. “I loved the contrast of something formal like a cummerbund, but doing it in an informal way – in corduroy or a tweedy herringbone.” Paired with white Mary Janes, they are charming. Acne Studios made them disco, covered in sequin-style discs and cinching a loose cobalt shirt, while Etro borrowed the waist hugging silhouette but did it knitted with a zip – perfect with trekking trousers and red velvet dinner jacket alike. They’re the season’s most versatile staple. 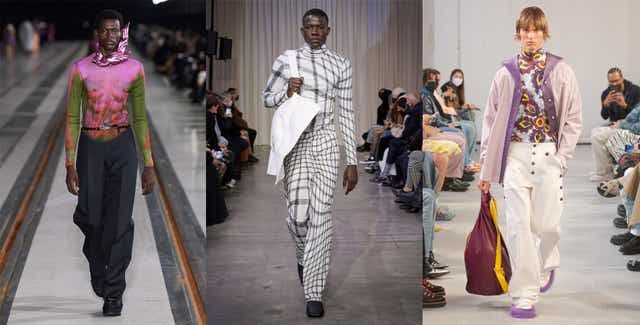 Fold up the boring black turtle necks, and pack some punch with your polo: skin tight printed tops are the go-to for pizzazz. For her Paris show debut, London-based designer Bianca Saunders offered up a warped chain print on white jersey and co-ord trousers. Naomi Campbell threw her a party after to celebrate. Bluemarble, the self-proclaimed “trippy” French house, lived up to expectation with a flurry of acidic, floral pattern tops. “They are part of the sailor wardrobe we revisited this collection,” founder Anthony Alvarez says. “Usually these shirts are more unicolour, but I wanted them bright and colourful with these prints.” However, the standouts were at Y/Project, where creative director Glenn Martens had free reign over Jean Paul Gaultier’s trompe l’oeil pattern archive. That meant rock hard abs printed in pink looking as good as they did in the nineties. Gym? Forget it.

Your country coat won’t cut it next winter; 2022 will be the year quilt goes crazy. JORDANLUCA, the London-based brand by Jordan Bowen and Luca Marchetto, made it their mission to give the textile new edge. Result? Diamond quilted flares squeezing thighs with sleek crop jackets. “Quilt is hard to work with, so the concept and silhouette was challenging,” Bowen says. Staying sexy was key. “We wanted to embrace London’s dirty and filthy glory. Go hard or go home!” At Dior Men, Kim Jones did the opposite; crisp, clean and completely Parisian patent coats were stitched like Lady Dior bags. Industry veterans Dsquared2 opted for hiker chic padded vests and capes, while Portuguese up-and-comer David Catalán did classic cut quilt jackets in electric hues, finished with matching crowns. Long live the quilt! 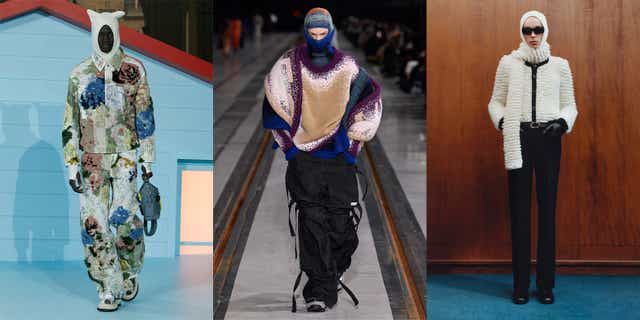 They have long been lurking, but now it’s official: balaclavas are blowing up. Always a step ahead, Virgil Abloh made them morph suit-style last season, and for the posthumous Louis Vuitton collection last week, new versions came in streams: knitted with ears, printed with Courbet’s paintings or LV monogrammed. You name it, they came with a little hole for your head. At ultra-chic Ernest W Baker, a Portuguese brand championing ‘grandpa athleisure’, balaclavas streamlined outfits with polish. Think red and black jacquard rose patterns, or creamy white with a fluffy cardigan scarf combo. “I grew up in Utah and the balaclava was a staple in my wardrobe anytime I would go out in the winter,” co-designer Reid Baker says. Black sunglasses, mandatory. Most endearing, though, were at Loewe where models on the sand catwalk wore striped knit balaclavas with heart-shaped peepholes framing faces. It must be love.

Faux furs forever. The It coats this year came huge-collared, chopped at the waist, and oozing metropolitan glamour. AMI lead the pack, where creative director Alexandre Mattiussi looked at the ‘urban ballet’ of Paris’ Métro. Cut to model Alton Mason striding forth in coal black fake fur, tuxedo and sheer heart print shirt. “This is how I imagined this quintessential Paris, this elevated reality,” the designer says. Statement, crisscrossing faux straps wrapped across GmBH’s red tailored coat, while emerging French house EGONLAB closed the show with a cocooning shaggy overcoat. “The ‘big fur coat’ belongs to the realm of fantasy,” co-designer Florentin Glémarec says. “They’re a glamorous and an intemporal shell, provocative of desire.” Sign us up.

How to stay toasty but show off your pearls? Get acquainted with the sliced-up sweater. At Fendi, knitwear came oversized with triangular cut outs to frame O’Lock necklaces on flesh. Small but similar chops were done at Neil Barrett, where the pullovers came plain and lilac. But leave it to London’s own JW Anderson to really cut the mustard. There, exposing multicolour links made up the entire jumper front. “We have these special knits with interlocking chains that are done by machine, then are padded and open up onto the chest,” he says. “This collection is about the interlocking, twisting and turning. Things that sometimes we think are kitsch, and kind of letting go in the process.” It’s high time to stop overthinking: just have fun with that sweater. 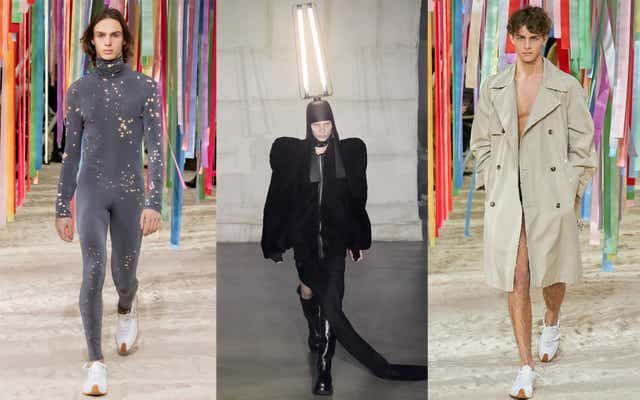 The most unlikely fad to switch on at the shows was lighting up your look. Most wearable were at Loewe, where an opening, nude shade vest was lit underneath by strips of LEDs. Glow up cat suits, trench coats lined with flashes, and transparent jelly boots with more LEDs all followed. DIY versions, that saw people shove Christmas lights down their tops, did the TikTok rounds in no time. A more sculptural play came at Rick Owens, where huge, bulb headpieces took cues from Ancient Egyptian silhouettes mixed with the florescent light works of artist Dan Flavin. They also double as freestanding lamps. Bright idea! Just take care in rain.