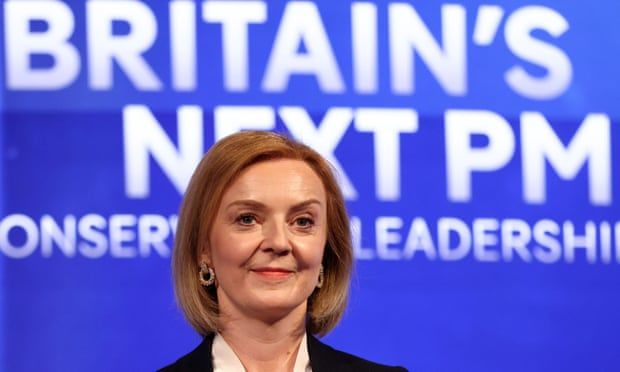 The Tory leadership debate: desperate as a sales pitch, worse as entertainment

The fatuous five lined up like the weakest Link contestants for the swindler who will replace the resigned crook
Hard to believe but it’s only just over a week since the latest Tory psychodrama began. It feels longer. So much longer. Time bends and stalls when you’re in the parallel universe of a Liz Truss speech. She leaves audiences begging for a lethal injection. The other leadership contenders are little better, registering mostly as absences on the space-time continuum. Negative energy.

But we are where we are and we have moved on to the first of the televised debates, a weird gameshow where the only audience that counts are the 360 or so Tory MPs who may or may not be watching. The rest of us are merely voyeurs, having no say in which two clowns will still be standing by next Wednesday evening. This is apparently how the UK likes to choose its prime minister these days. Very on brand for a country that has become a laughing stock.

First, though, there was a warm-up Zoom hustings on the Conservative Home website. Think a weekly meeting of junior sales reps. Only infinitely more boring. It’s almost as if no one really wants the job. Which would actually suit the rest of us.

The only highlights were the flatlining Truss forgetting to unmute herself – she’s at her most articulate when you can’t hear her – and Ready4Rish! suggesting that his biggest fault is his perfectionism. I’d say a far greater fault was being in charge of an economy that is predicted to have the second lowest growth in the G20. If he was a real perfectionist he’d have made sure we were bottom. The other three – Penny Mordaunt, Tom Tugendhat and Kemi Badenoch – said nothing memorable at all. Which meant they easily came out on top.

Come 7.30pm, the Fatuous Five were lined up like The Weakest Link in the Channel 4 studios with Krishnan Guru-Murthy as guest presenter. And what a dismal 90 minutes it was. Desperate as a political sales pitch. Worse as entertainment. On this showing, the gene pool of talent in the Tory party isn’t even a puddle. A great night for the Labour party, if no one else.

The first question was one of trust. “I’ve delivered the impossible,” said Truss, blinking rapidly and sounding like a superannuated 1980s Amstrad computer. As AI goes, Liz makes the Maybot look human. At least Theresa May was vaguely aware there was a reality from which she was detached. Truss is just some free floating atoms in search of a personality and ideas. Virtually nothing she said made any sense. And if it did, it was entirely accidental. She is everyone’s preferred comedy candidate.

Not that Rish!, Mordaunt or Badenoch could come up with any better reasons why they should be trusted. Resigning from the government months – if not years – after the rest of the country has concluded that Boris Johnson is a lying, narcissistic sociopath isn’t going to win anyone any brownie points. Tugendhat won the first applause of the evening by shaking his head and saying The Convict was dishonest. Tugendhat went on to quote Harry Potter and thereafter chose to play the part of the outsider. The wise younger man who was outside the system and who could afford to tell the truth. Not that it mattered much as he is going to be out of the contest on Monday.

Nor did anyone pay much attention to Badenoch after she had had her five minutes kicking lumps out of Mordaunt over the culture wars as she too isn’t a bona fide contender. So most of the rest of the debate consisted of Liz fantasising about uncosted tax cuts and trying to sound human – next time out, someone should restore her to her factory default settings – and Mordaunt sounding surprisingly wooden and clueless. Someone should teach her to smile and not talk in banalities. She even forgot her own promises to cut tax. Just trying not to screw up on live TV is setting the bar a little low for a wannabe prime minister.

All of which left the hopeless Rish! sounding like the voice of experience and the only person you might conceivably trust with running the country. But only because the rest were no hopers or out of their heads on Mogadon. Terrifying really. Still, we can only hope that Tory MPs are stupid enough to coalesce around Liz. After all, we’re fucked regardless. So we may as well go down with a laugh.
#Boris Johnson  #Johnson