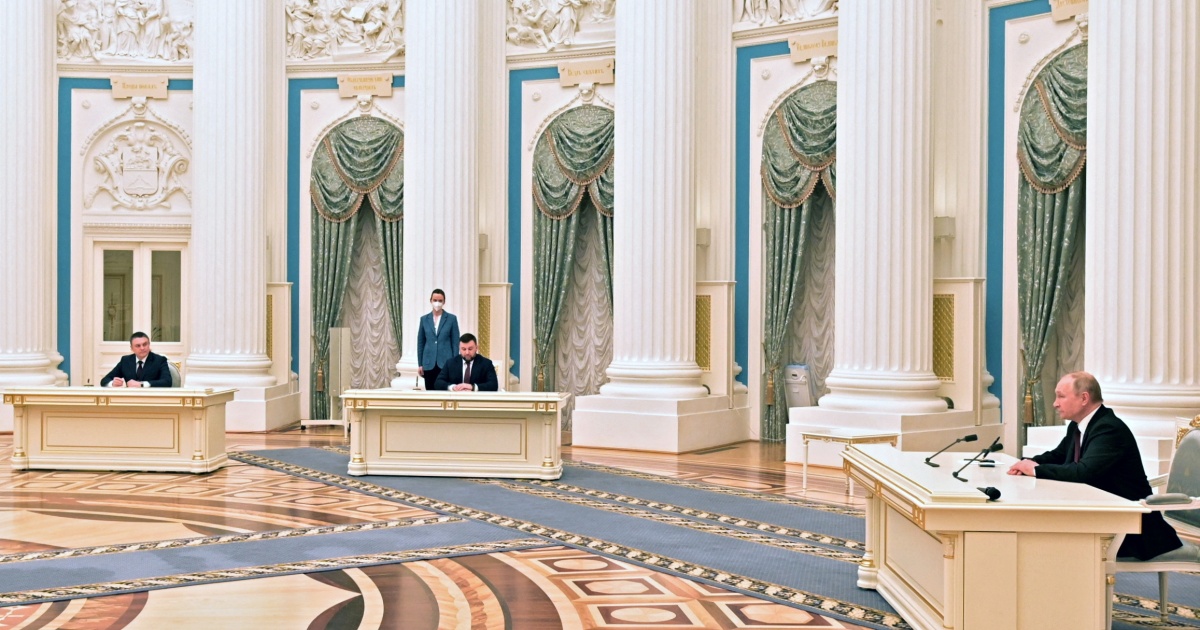 There will be no winners in a Ukraine war

By recognising DNR and LNR, Putin is pushing for war. But he will not emerge victorious.
So here we go: Putin has rolled the dice. On February 21, he issued a decree recognising the breakaway People’s Republics of Donetsk and Luhansk (DNR and LNR) in Eastern Ukraine.

The Duma, the lower chamber of the Russian Federation’s parliament, duly ratified the cooperation and mutual assistance agreement concluded with the two “states” the day after with zero votes against and no abstentions.

Russian troops are now officially deploying in the Donbas. There is no longer the pretence that Kyiv authorities are really facing local rebels sympathetic towards Moscow, and that this is a civil conflict rather than a showdown between Russia and Ukraine.

Where does this leave us? Recognition closes the diplomatic and political route the West invested so much into during the past eight years. The Minsk II protocol agreed upon by the so-called Normandy Four (Russia, Ukraine, France and Germany) back in February 2015 is no longer worth the paper it is printed on.

It stipulated that the reintegration of DNR and LNR into Ukraine would happen after constitutional amendments granting them special status are passed. Other provisions of the document allowed for Russia to partly restore its lost leverage in domestic politics, as well as see some of the Western sanctions lifted. Ukraine, for its part, would recover territorial control.

In hindsight, Minsk probably never had a chance. Russia and Ukraine had opposing interpretations as to the sequence of steps: Kyiv wanted to re-establish control over the border with Russia first before changing its basic constitution and Russia wanted it the other way around. But on February 21, this all became history.

There are at least two forecasts for what happens next: a slightly optimistic one and a rather dark one. For a minority of Russia-watchers, the de facto takeover of DNR and LNR is an alternative to an all-out attack against Ukraine. The new “states” can be admitted to the Union State of Russia and Belarus, a mini-USSR led by Moscow. Putin will bask in the glory of a great restorer of Russia’s grandeur, the way he very much wants to go down in history books.

Yet there are numerous sceptics, too. Scuppering the Minsk Accords is equivalent to surrendering a bargaining chip. Recognising the separatist statelets is tantamount to capitulation, to losing the rest of Ukraine, Foreign Minister Sergey Lavrov opined back in 2018.

So why mass more than 100,000 troops along with heavy weaponry and then walk away with what you already have anyway? “Russia is not unilaterally giving away its main leverage over Ukraine, for nothing (plus getting sanctioned), or just introducing troops into occupied territories where it has already kept forces on rotation for 8 years. That’s not what this is about” – as analyst Michael Kofman put it.

In other words, Putin has his sights on the entirety of Ukraine. Claiming DNR and LNR is only the first step towards further action aimed at securing control over the rest of the neighbouring country. Putin’s vitriolic speech on February 21, questioning Ukraine’s sovereignty and historical foundations, sounded ominous.

The coming days will show where we are heading. Moscow was purposefully ambiguous on the critical issue of where DNR and LNR’s western borders lie. But on February 22, Putin stated that the administrative regions, two-thirds of which are still controlled by Kyiv, belong to the newly recognised entities.

In the meantime, the Federation Council, the upper chamber of the parliament, authorised the use of military force abroad.

We may be on the brink of a major showdown. Taken together, Putin’s decisions mean that Russia has declared war on Ukraine. And once the hostilities start, the Kremlin could order troops to take Kyiv as well as other big urban centres in the south and the east of the country, carry out regime change and install a puppet government. In Putin’s mind, that might be the only way to stop Ukraine’s westward drift which started with the Orange Revolution in 2004-2005.

Will the Russian plan work? In the short term, there is little that can stop Putin. The balance of power and of resolve is firmly in his favour.

In the longer term, things might get messier, however. Keeping Ukraine through coercion and blunt force will generate pushback. An insurgency in Ukraine would start eroding Putin’s popularity at home when the body bags started coming back home.

On Twitter, imprisoned Russian opposition leader Alexey Navalny likened the Kremlin’s aggressive posturing to 1979 when the Soviet Politburo took the perilous decision to invade Afghanistan. Even if that comparison is pushing it too far, one should not underestimate the power of nationalism. To bring in another historical parallel: in 1968, Soviet and Warsaw Pact troops suppressed the Prague Spring but eventually the locals’ desire for emancipation won the day. Put bluntly, occupying Ukraine today means severing that country’s umbilical cord with Russia in perpetuity, hardly the legacy Putin desires to leave behind.

Tougher Western sanctions will also drive up costs for Russia. German Chancellor Olaf Scholz’s decision to put the Nord Stream 2 pipeline on hold, long a shibboleth for German politicians of all stripes, is a harbinger of things to come in case of an all-out war. The Biden administration is turning up the heat on Moscow, too, unveiling a first round of sanctions on February 22. The UK is following suit.

Sure enough, the Russian economy has previously shown resilience and weathered the storm. But growing isolation will not improve the livelihood of ordinary Russians as discontent is mounting.

The televised (or rather recorded) session of Russia’s Security Council on February 21 showed Prime Minister Mikhail Mishustin, a technocrat charged with reforming institutions and revitalising the economy, visibly uncomfortable with the turn Russian foreign policy was about to take. But neither he, nor other members of Putin’s entourage less enthusiastic about this turn of events – like the Defence Minister Sergei Shoigu or foreign intelligence head Sergei Naryshkin, dared stand up to the boss.

Russia, Ukraine and – let us not fool ourselves – the whole of Europe are facing dark days ahead. There will be no winners, only losers, if guns start shooting and the tanks roll in.
#Afghanistan