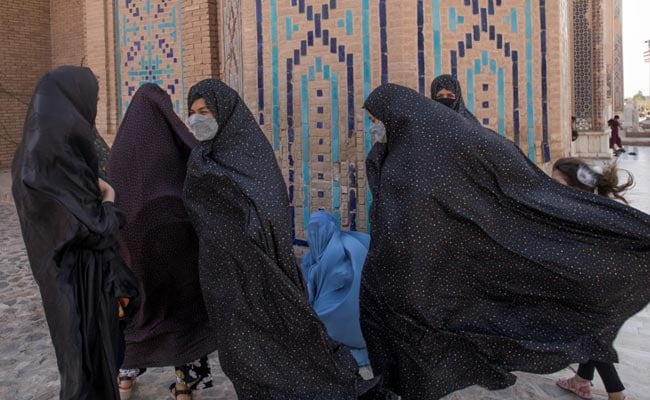 "They Don't Consider Us Humans": Afghan Women On Taliban Rule

Taliban went to the homes of women activists and politicians to intimidate them and they had to either flee the country or stay quiet, said Afghan parliamentarian Shinkai Karokhail.
"They don't consider women as humans," says Humeira Rizai, a researcher and activist from Afghanistan who fled her country along with tens of thousands of compatriots to escape the atrocities of the Taliban.

It was a return of the nightmare for women like Rizai and Afghan parliamentarian Shinkai Karokhail when the Islamic militia swept across Afghanistan last month, seizing control again of almost all key towns and cities, including capital Kabul, after two decades following the withdrawal of the US forces.

"Women were executed and beaten (when Taliban took over earlier). They took away all their rights. Women worked very hard to get back on their feet since 2000 which has again been lost," Rizai said.

In an interaction with women journalists organised by the Indian Women's Press Corps, Karokhail recalled the turmoil Afghan women have been going through since the Taliban took over the country.

"It is a terrible situation there," she said.

Karokhail said the Taliban went to the homes of women activists and politicians, who could not leave Afghanistan as many countries had stopped giving visas, to intimidate them and they had to either flee the country or stay quiet.

"So lots of women activists and politicians were stuck in Afghanistan and kept changing their places because the Taliban went to their homes searching. They took the weapons of their security personnel. Their cars were also taken by the Taliban.

"So this is the way they wanted to scare women who had to run away or keep silent and not raise their voice," Karokhail, who is also a women's rights activist, said.

Afghan journalist Fatima Faramarz said women are considered "animals and the Taliban decides to treat them as they please".

Recalling a recent incident, she claimed her colleagues were brutally beaten when they went to cover a protest.

"They were covering a protest. They were taken by the Taliban to a police station and were beaten with batons and electrical cables. They beat them with whatever they had in their hands," said Faramarz who broke down while narrating the incident.

She said the future of women in Afghanistan is "unclear" and bleak under the Taliban rule.

Taliban earlier took over Afghanistan in the 1990s.

According to Human Rights Watch, the Taliban's rights record in the 1990s was characterised by systematic violations against women and girls; cruel corporal punishments, including executions; and extreme suppression of freedom of religion, expression, and education.

Noting that women of today in Afghanistan are not the same as 20 years back, Karokhail said they are aware, informed and know their rights.

"The women have the right to be included. It is not the man's country and we have equal rights over the country," she said.

Karokhail said women are suffering in Afghanistan as all economic activities have closed.

"Taliban and supporters of Taliban like Pakistan, China and Russia must be made accountable because they are behind the situation there. The US must have accepted the mistakes they made in Afghanistan," she said.

"I left my country with a heavy and broken heart, it wasn't easy and I struggled a lot," said Karokhail who left Afghanistan on August 20, five days after Kabul fell.

Rizai said the Taliban rule in the 1990s sent the country 100 years back.

"They didn't consider women as humans. I was born in a rural area during the Taliban rule and could not go to school there at that time. We fear that there will be an extreme rise in trafficking and selling of women in Afghanistan now that the Taliban is back," she said.
#Afghanistan