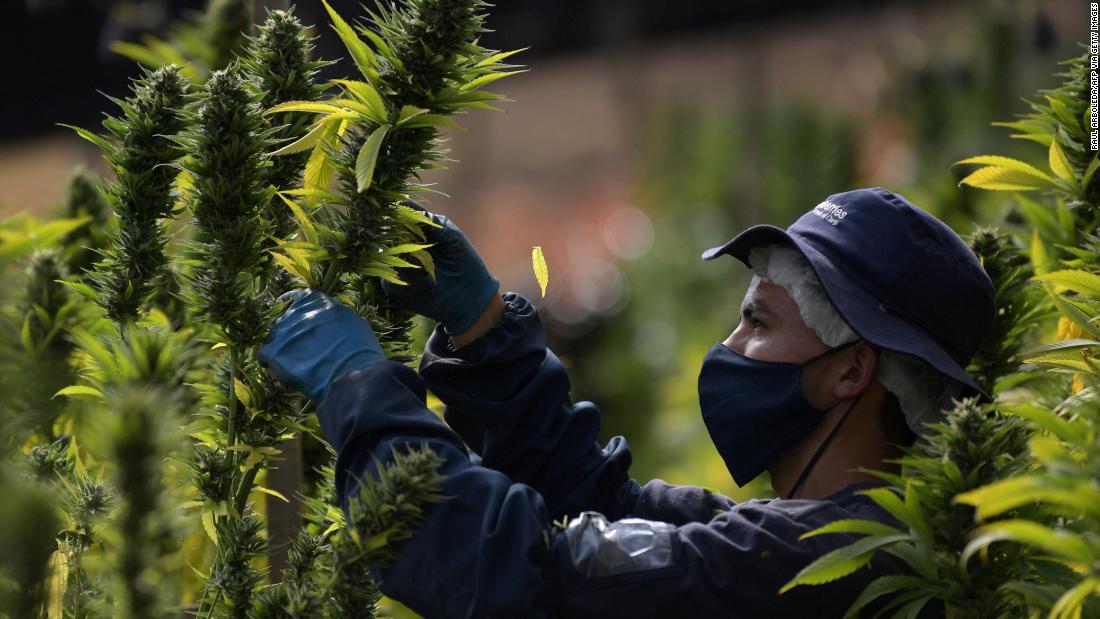 This country calls time on the 'war on drugs'

)It's the home of notorious drug trafficker Pablo Escobar, and the origin of legendary Santa Marta Gold -- once the most sought-after varieties of weed in the United States -- named after Colombia's Sierra Nevada de Santa Marta mountain range.

For many, Colombia is synonymous with drug cartels and narco-traffickers. It is one of the largest narcotics producers in the world -- last year, the US government estimated was producing over one million kilograms of cocaine, the highest in the world and more than the two closest nations, Peru and Bolivia, combined. So when the South American country's new president says he intends to regulate the use of illegal substances -- or at least some of them -- the world listens.

"It is time to accept that the war on drugs has been a complete failure," Colombian President Gustavo Petro announced during his inauguration festivities earlier this month, commenting on a bill his administration recently presented to legalize recreational marijuana to Congress.

Colombia's law already allows the production of cannabis for medical purposes, mostly to be exported to foreign markets like the United States and Canada, but supporters of the new legislation believe that only legalizing recreational cannabis can push thousands of farmers away from drug trafficking and into the legal trade.

To this day, the Colombian state faces challenges over control of its territory by a variety of criminal actors, from former left-wing guerrillas and paramilitaries to narco-cartels and organized crime syndicates. Drug trafficking is a powerful source of revenue for these outlaws, and over the past 50 years public authorities have pushed a prohibitionist agenda, banning the trade and consumption of drugs in order to hit the criminals in their pockets. But the stream of illegal drugs never ceased.

"We will never achieve peace in Colombia until we regulate drug trafficking," said Senator Gustavo Bolivar, one of the signatories of the new bill and a close ally of the new president.

"Not even the United States, with all their might and money, could win the war on drugs... Right now, Colombia produces more drugs than when Pablo Escobar was alive, there are more consumers, more farmers. The drug trade is growing despite the money we invest in fighting it, and the thousands of deaths we suffer," said Bolivar, who recently traveled to Colorado for a firsthand look at the economic benefits of legalizing weed.

In an interview, Bolivar told CNN it was hypocritical of the United States to legalize marijuana at home, and supporting drug wars abroad such as in Colombia, where Washington sends millions of dollars every year to arm and train Colombian forces in their struggle against the cartels.

A landmark report from the Truth Commission, an interdisciplinary panel tasked to investigate over 50 years of civil conflict in Colombia, found that drug trafficking helped prolong the conflict despite almost $8 billion in military aid from the US to Colombia. At least 260,000 Colombians, the vast majority civilians, were killed in the violence. 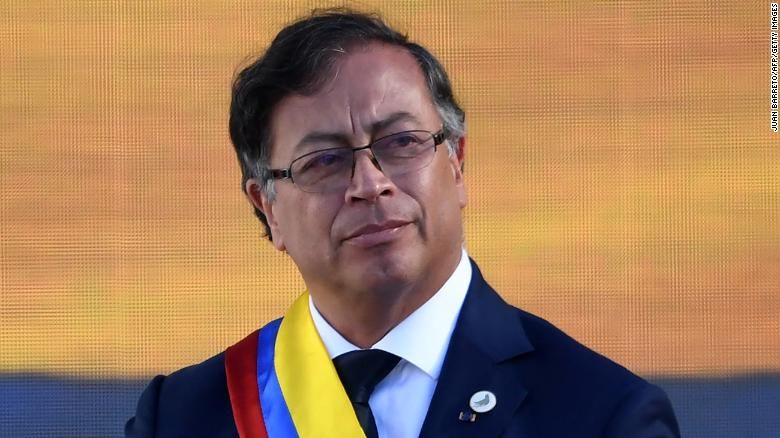 Colombia's President Gustavo Petro delivers a speech after his inauguration ceremony at Bolivar Square in Bogota, on August 7, 2022.

A new generation of Colombian leaders

The campaign to legalize weed in Colombia unites left-wing senators like Bolivar with civil society organizations and deep-pocketed foreign investors, and has received a boost over the last 12 months from the country's changing politics, with Petro ascending to the presidency and progressive parties now a majority in Colombian congress.

"We saw the legalization of adult-use recreational two, three, or four years down the line... but now we're hoping for this year," said Luis Merchan, a Colombian businessman who is the CEO of Flora Growth, a Toronto-based company that is investing in Colombian marijuana from medical cannabis to textile hemp.

The campaigners who have demanded this shift for years agree.

"We think now the time is ripe to do it," says Luis Felipe Ruiz, an investigator at Colombia's NGO Dejusticia, which supports decriminalizing drugs and has documented the war on drugs for years. Drug trafficking is the top cause of detention in Colombia and, according to the Colombian Justice Ministry, 13% of the country's detainees are serving a sentence related to the drug trade. Ruiz argues that one of the benefits of legalizing marijuana would also be decreasing the prison population in the country. 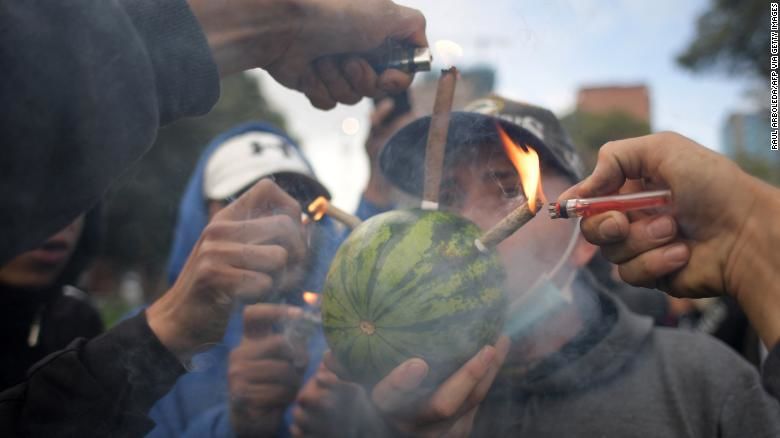 People take part in a rally to commemorate World Cannabis Day in Bogota in April 2022.

"There's a large part of the political world that is ready to have a debate on legalizing marijuana and, frankly, taking away the stigma against cannabis is already a great victory for us," Ruiz told CNN.

Those who oppose legalization hail from the conservative right and believe the shift would just make drug abuse easier. Former President Alvaro Uribe, a political mentor of Petro's predecessor Ivan Duque and the main exponent of conservativism in the country, tweeted in 2020 that "recreational marijuana leads to other drugs, alters the neurons, the consumer reaches states of alienation, loses control over his decisions, which is the loss of his freedom," celebrating when a previous project to legalize weed was blocked in Congress.

Historically, marijuana in Colombia is grown by small-scale farmers who cannot afford the pharmaceutical licenses required to produce medical cannabis, so they sell their product to drug cartels.

The bill presented to Congress could allow these small-scale farmers, most of them based in chronically underdeveloped rural regions of Colombia, to finally enter the legal market.

COCCAM, a confederation of coca, marijuana and poppy growers that works as a lobbying group for illicit farmers, estimates that up to 3,000 families depend on illegal marijuana as a main source of their income, mostly in the southwestern department of Cauca. In most cases, these farmers live in isolated rural areas that are hours away from the closest paved road. 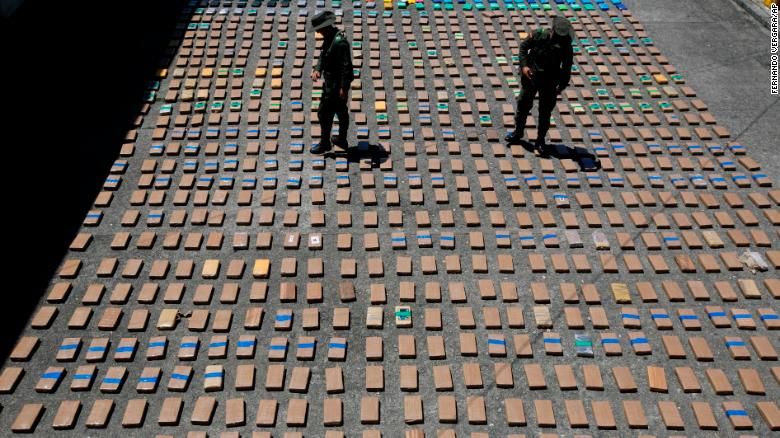 Police officers walk among packages of seized cocaine at the Pacific port of Buenaventura, Colombia.

Compared to legal agricultural products like fruit and vegetables, marijuana and coca leaves don't spoil for days and sell at a higher price per kilogram. They also have the advantage of growing all-year round, while most plants give a harvest only a few months a year.

Because of Colombia's historic role, legalizing recreational use would be an immense cultural shift -- and perhaps a source of pride, Marchan said.

"It would be not only a source of pride for someone like me for what was frowned upon: I have been in business for a number of decades and when somebody learns that I'm from Colombia you always get the 'ahh,' that weird look," he said. 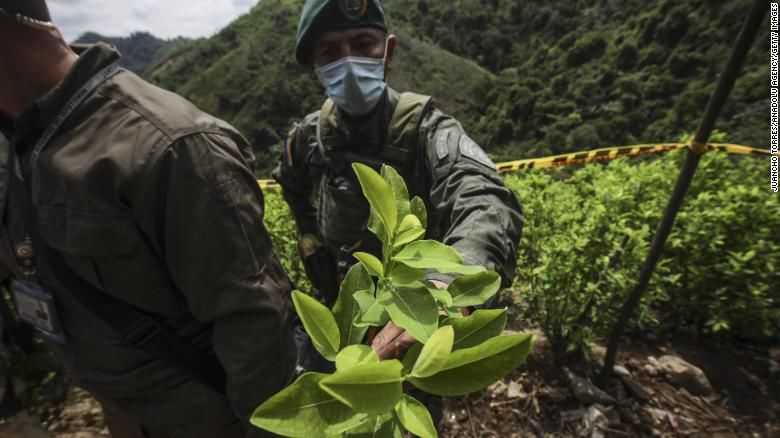 Bolivar, the senator, believes the Colombian regulatory system will, eventually, follow the same path by legalizing not only marijuana but even cocaine -- the most lucrative source of income for the cartels.

Drafting numbers on an illegal market is never an exact science, but a 2016 study from the Colombian government estimated that drug trafficking -- the flow of illegal drugs, mostly cocaine, that is produced in Colombia and sold in international markets from Europe, to North America, to Asia -- was worth up to 3.8% of the Colombian GDP or $7.5 million at the time.

In comparison, illegal drug consumption -- intended as the drugs that are consumed illegally in Colombia and where marijuana plays a larger role -- was worth 0.75% of the Colombian GDP -- $2.18 million.

"Marijuana is small change in the drug business. The big money that the cartels are making, and the lion's share of the problem, is called cocaine. And people in Colombia and Mexico will continue to die as long as we look at the problem with hypocrisy," Bolivar told CNN.

He envisions a network of state-regulated dispensaries where cocaine could be sold under medical prescription, and regional agreements across other drug producing countries. The three largest producers of cocaine in the world -- Bolivia, Colombia, and Peru -- are all currently ruled by ideologically aligned, left-wing leaders. Bolivia has a thriving legal market of coca byproducts, mostly dry leaves that are chewed by the indigenous population and already in 2012, the governments of Bolivia and Colombia pushed for a regional re-thinking of drug policies in multilateral meetings.

"We could for example make a small treaty in our countries to modify the 1961 Convention on Narcotic Drugs and plant the first flag of legalization in the world; other countries may follow," the senator said.

But before international treaties are rewritten, Colombia might still have a legal battle ahead of it. As it stands, the Colombian constitution explicitly forbids using narcotic drugs without medical prescription; so even if Congress passed a law legalizing recreational marijuana, it could be deemed unconstitutional by the Supreme Court.

An appeal to eliminate that article has already started by another lawmaker, Congressman Juan Carlos Losada.

"It's a two-front battle. Our legalizing bill in Congress, and the appeal by Losada to the constitutional court. Whichever comes first we will support it, because this country needs peace," said Bolivar.