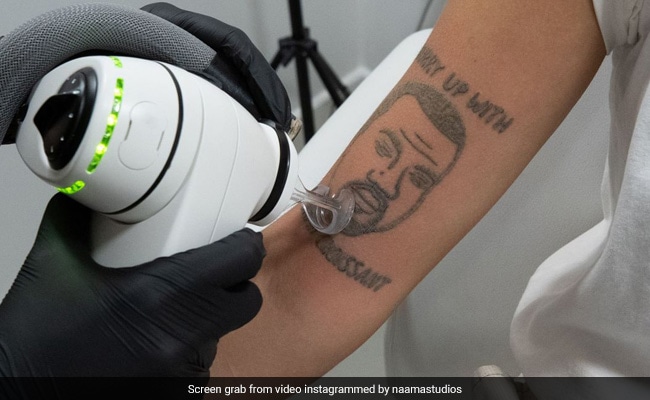 People with Kanye West tattoos can reach out to the studio through email or by tagging them on social media.
A tattoo removal studio in London is offering to remove Kanye West's tattoos free of charge as the American rapper continues to promote antisemitism and praise Adolf Hitler, reported CNN.

NAAMA Studios, a laser tattoo removal spot in Central London, announced on Instagram that it would not be charging its clients to remove tattoos related to the rapper. In the post, the studio said, "Yeezy come, yeezy go Got a #kanyewest tattoo? Tag us." The photo reads, "We'll remove your Kanye tattoos for free."

In another post, they wrote, "When you have a tattoo inspired by someone you admire and they end up making headlines for all the wrong reasons... at NAAMA we offer an empowering, empathetic, high-tech tattoo-clearing experience. If you want a change, we're here to help."

According to the website, the full tattoo removal can be done in about 2 to 3 weeks, or 10 to 15 sessions.

According to a CNN report, the tattoo removal initiative has received "global interest and a great response."

"When you have a tattoo inspired by someone you admire and they start making headlines for all the wrong reasons, it's not exactly something you want to wear on your sleeve that you are or were a fan," Garbett added. "With that in mind, we wanted to come to the aid of those who are embarrassed about their Kanye West-inspired tattoos and are offering complimentary treatment for all UK fans that want them removed."

The rapper openly heaped praises on Adolf Hitler. In what could be termed as an unlikely and bizarre statement, Kanye said that he sees good things in Hitler, as per New York Post.

According to New York Post, which is a daily tabloid newspaper published in New York City, Kanye appeared for an interview with Infowars host and conspiracy theorist Alex Jones on Thursday wearing a black hood that covered his face.

In the last two months, Kanye has received a lot of flak due to his anti-semitic rhetoric, which has cost him lucrative partnerships with companies like Adidas and Gap.