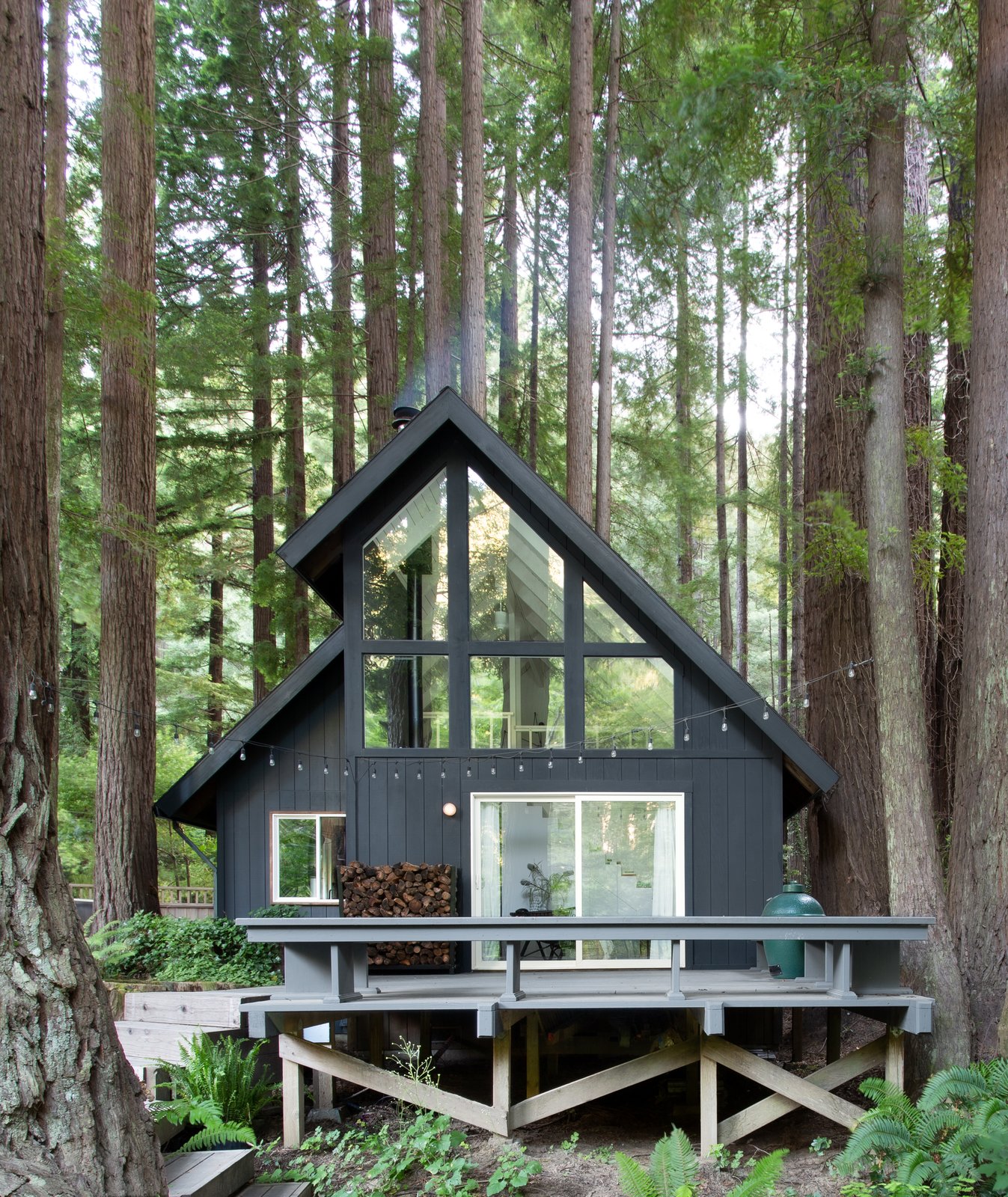 San Francisco–based architects Brit and Daniel Epperson transformed a 1974 A-frame into a bright and airy getaway tucked away in the woods. Located seven miles from the coast in the Sonoma County township of Cazadero, the A-frame is perched on Austin Creek, a fish spawning tributary that meanders its way into the Russian River.

"It’s almost impossible to buy a home in San Francisco," Brit says with a laugh. "This is a way for us to get this out of our system." 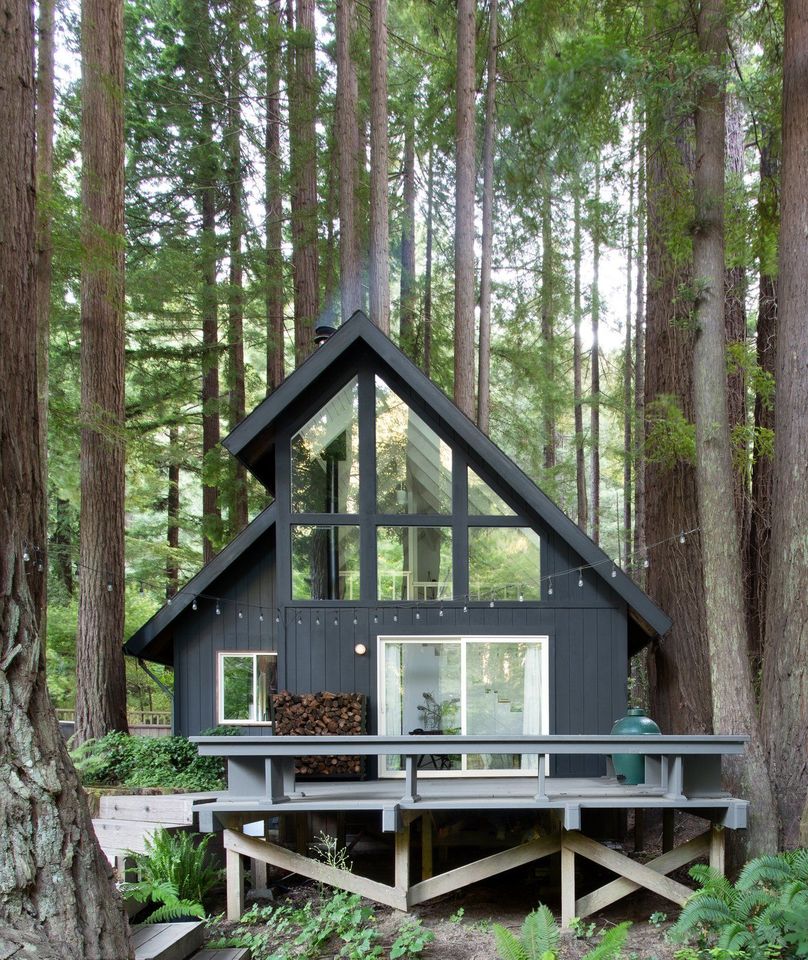 The 1,088-square-foot A-frame is located about an hour-and-a-half drive north of San Francisco in Western Sonoma County’s Cazadero township. 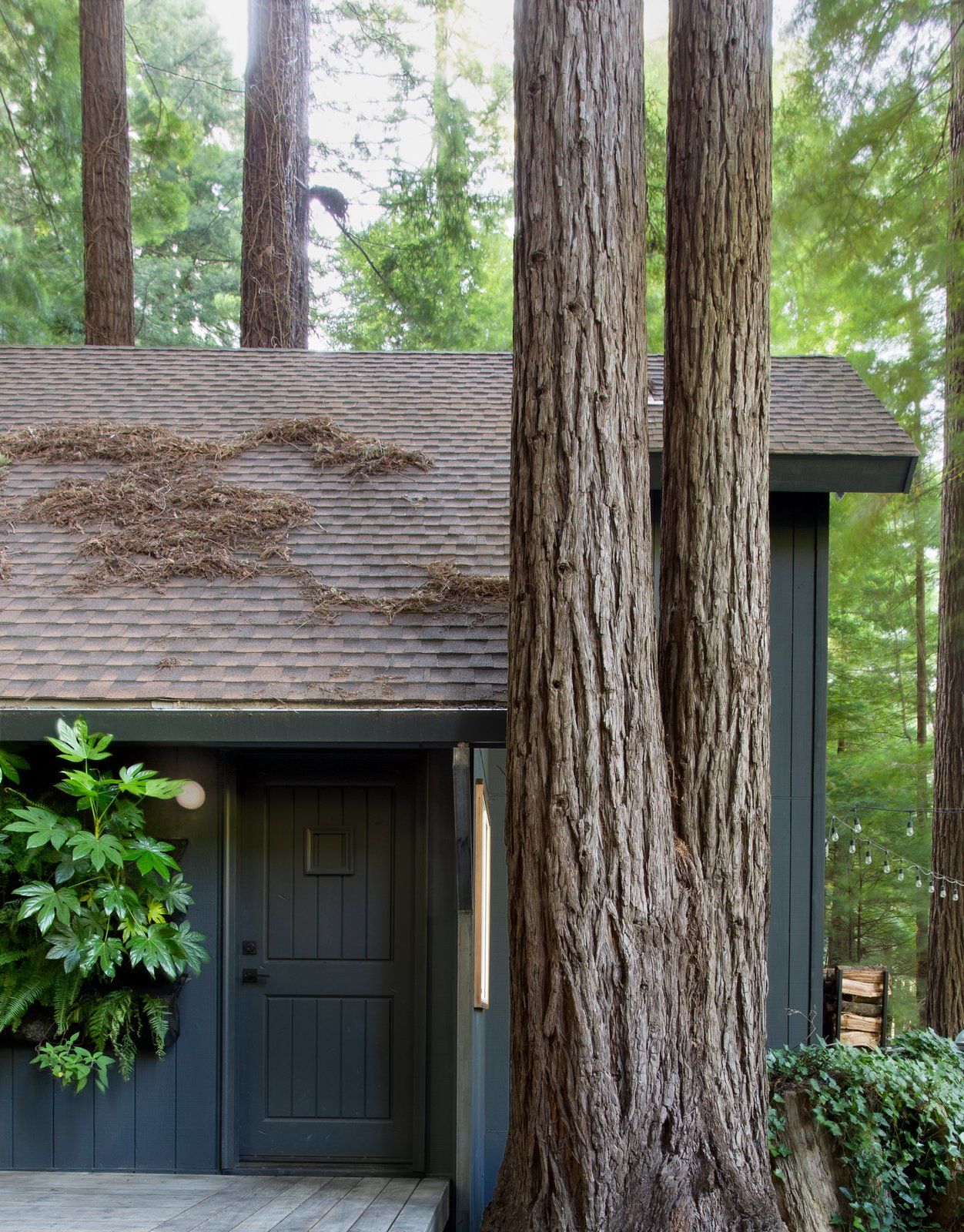 The cabin’s redwood siding is painted a custom Sherwin-Williams black with green and blue undertones. The exterior face-lift also introduced additional plantings and rehabbed and extended the deck. 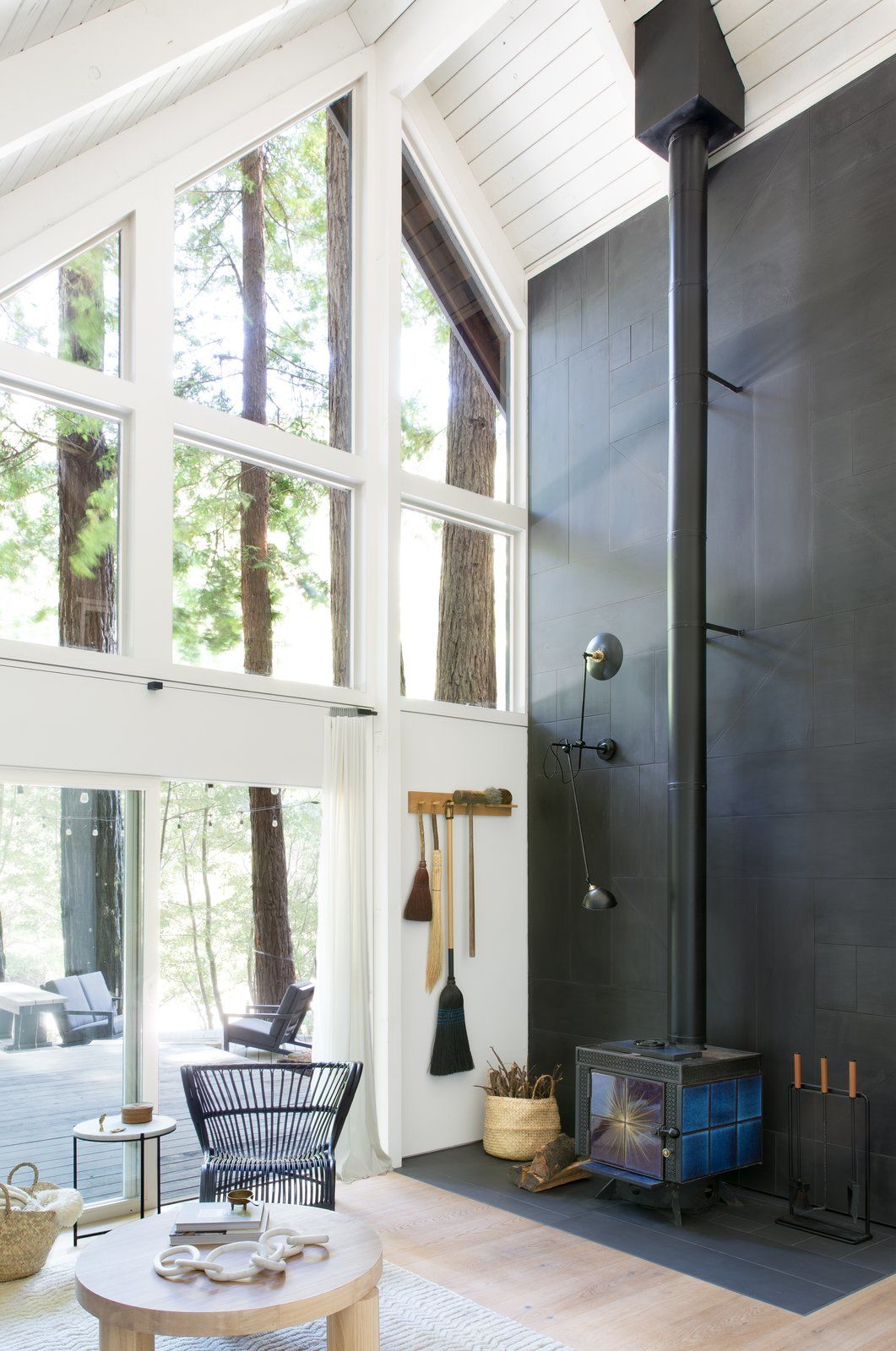 Brit, founder of Studio PLOW, and Daniel, the design director of Rapt Studio, used the project as a way to experiment with design concepts and explore their joint creativity.

Over the course of 18 months, the couple spent their weekends working on the house. They did most of the renovation themselves, although they had family and friends help out here and there. For instance Brit’s brother Barrett Karber, a San Francisco–based furniture maker, built the carpentry and furnishings.

Brit and Daniel embraced elements that were original to the A-frame-like the wood stove. 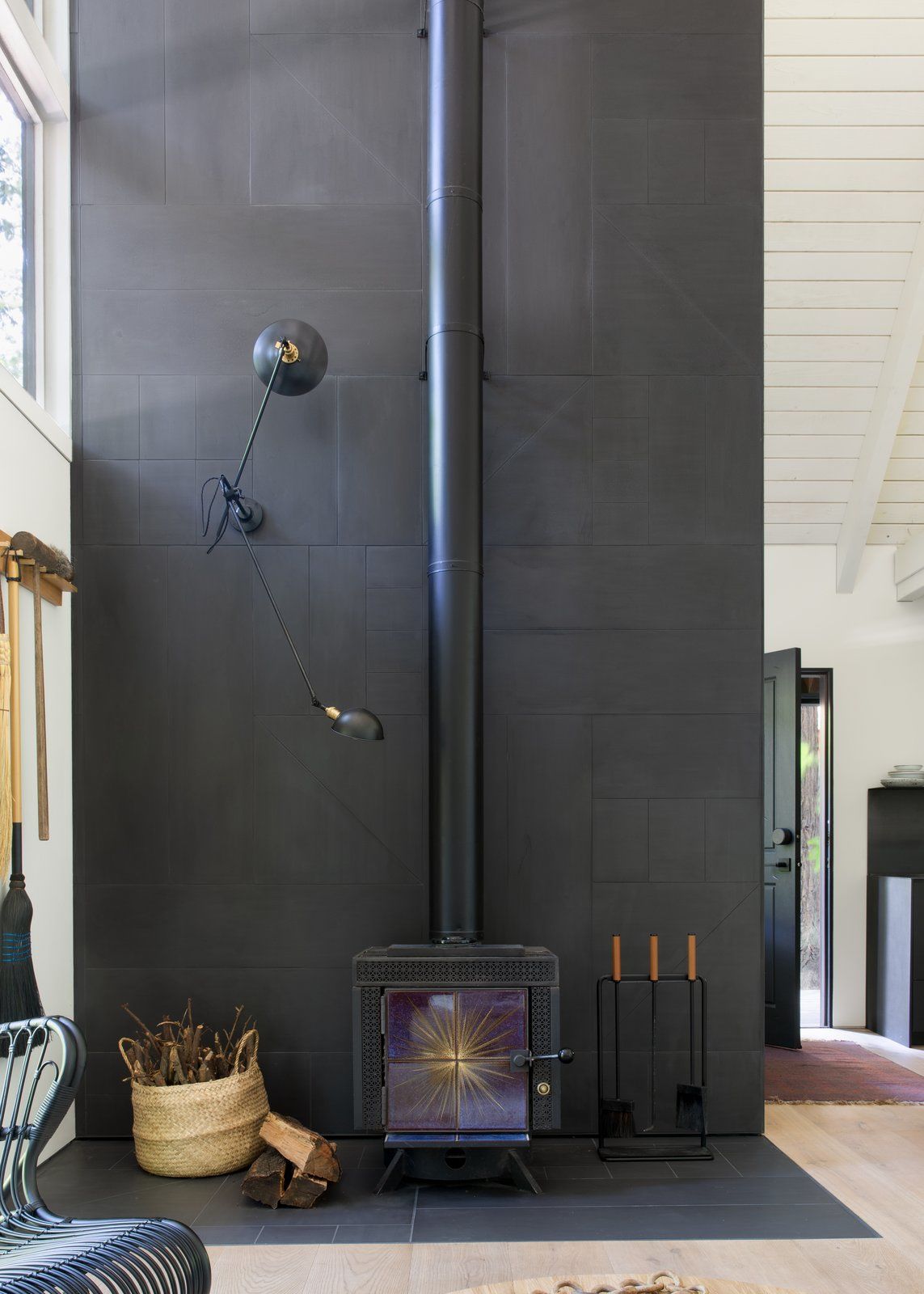 In the all-white space, the architects defined gathering places with the use of black tones. In the living room, they created a fireplace surround by cutting and arranging 2' x 4' tile into a geometric quilt pattern.

"It had great bones. The structure hadn’t been compromised, and it was true to the original idea of an A-frame," says Brit. "The negative to that is that we had to gut everything, pull out all the old finishes, and strip it down to give it a nice fancy face-lift." 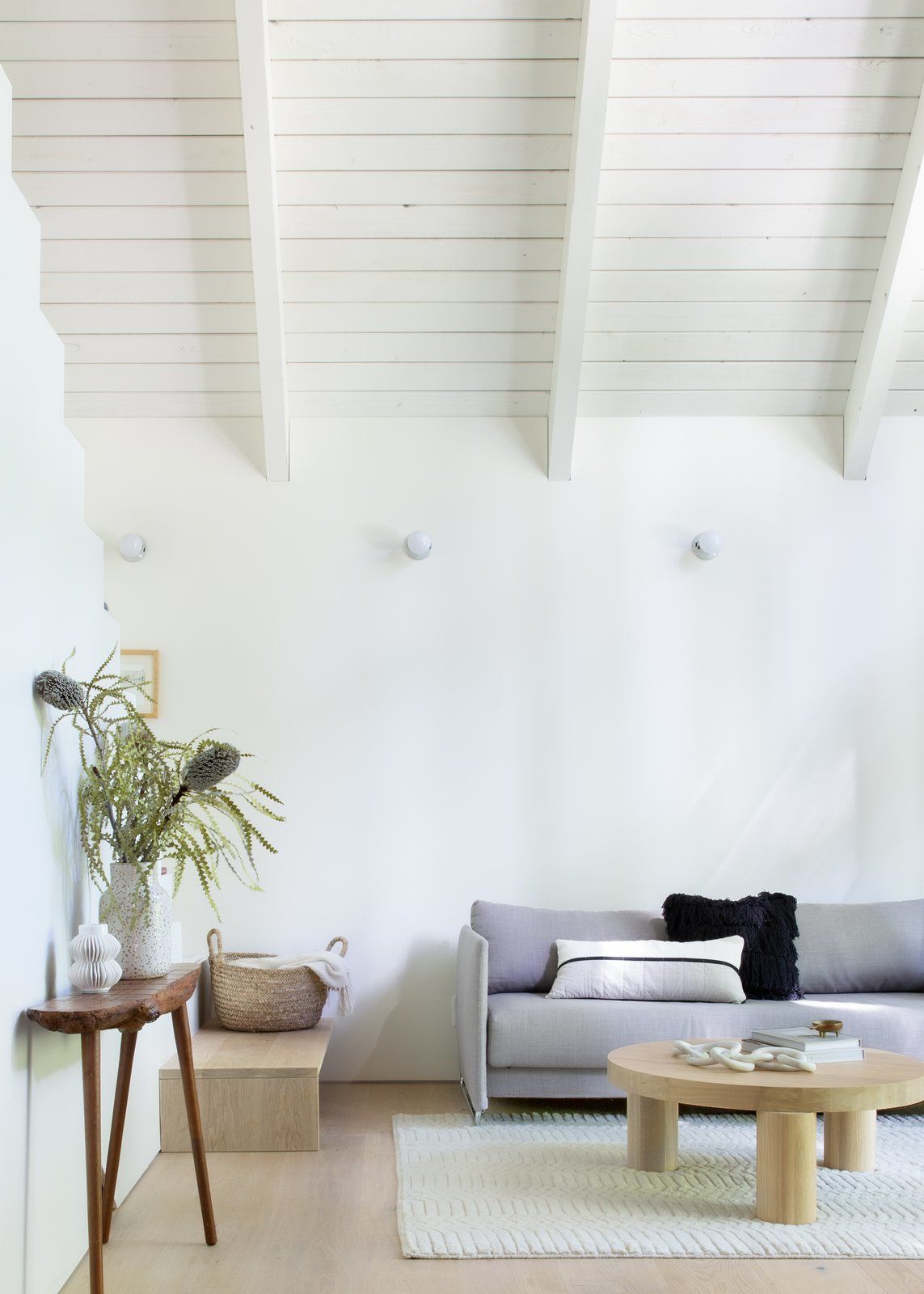 The couple took their time cherry-picking furnishings, decor, and art. 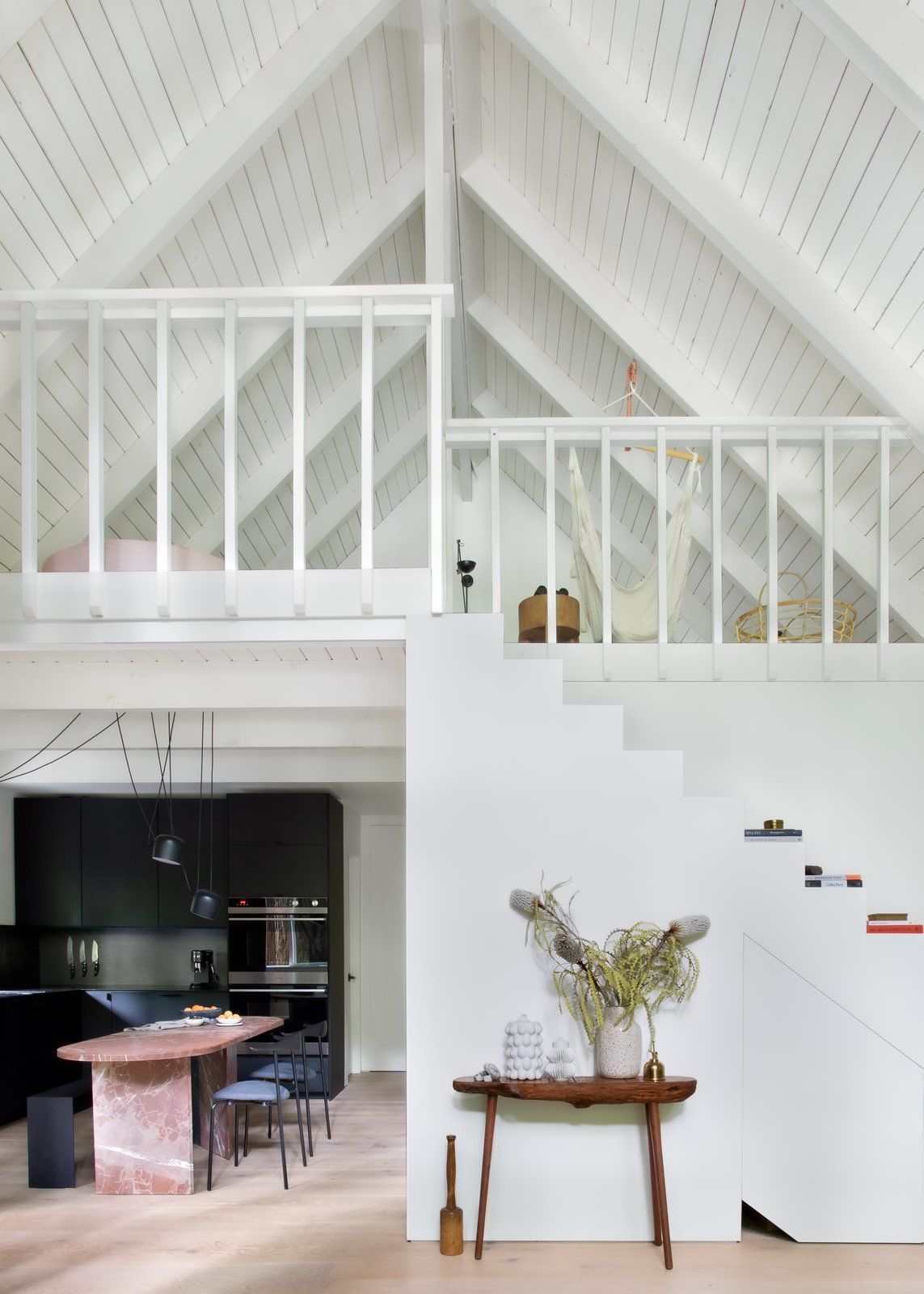 The staircase’s redwood handrails were stripped down and reused as exterior window trim. Underneath the stairs, a little cutout was created for the couple’s cat.

The couple were originally drawn to the cabin because of the old-growth redwood timber that was used to construct it. "It was in great shape," adds Brit. "We didn’t have to do much to the shell." 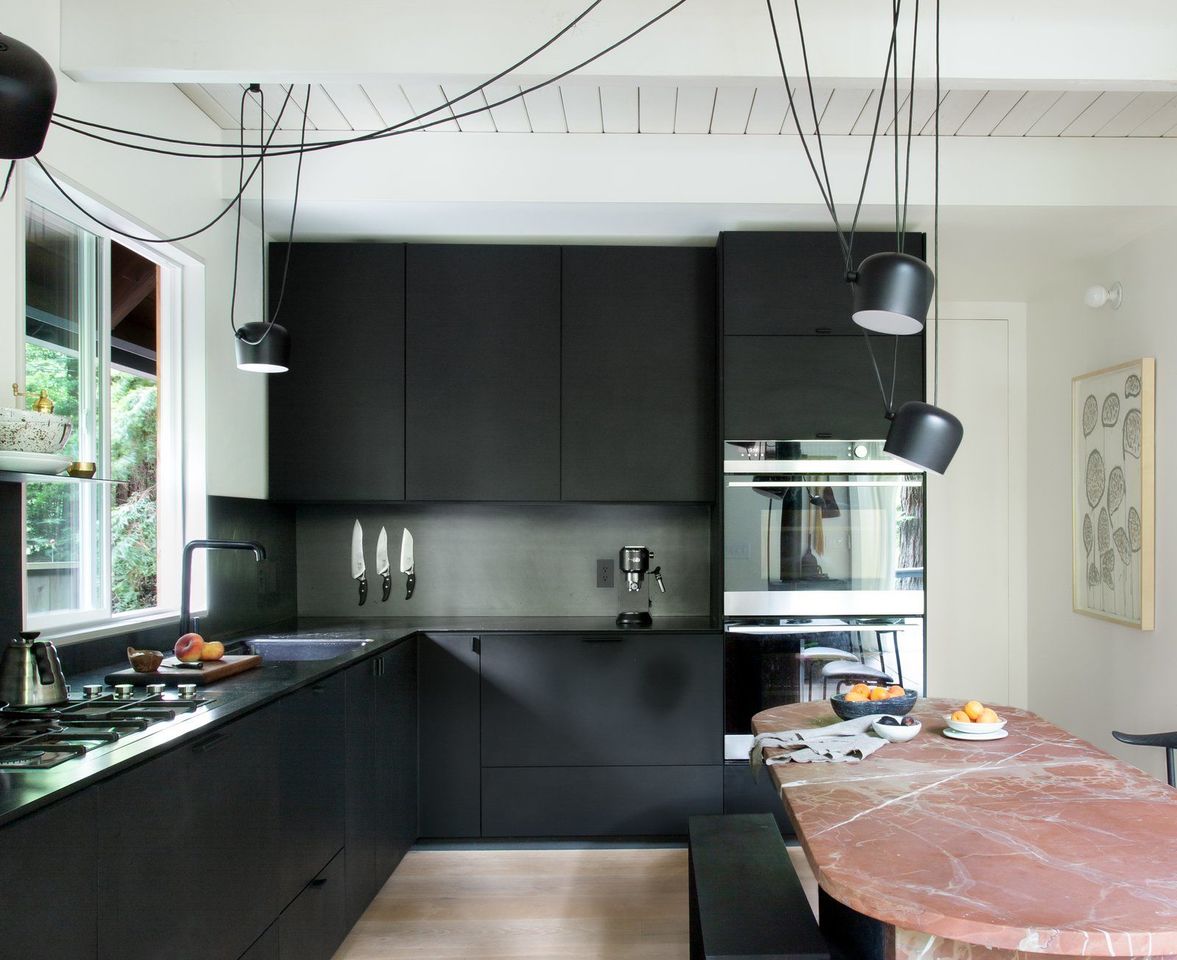 The kitchen features hacked IKEA cabinets-Brit and Daniel built custom fronts and side panels out of Valchromat, a recycled engineered wood. The cabinets are topped with black steel, which extends up the wall as backsplash. "We wanted to find an inexpensive way of doing a really terrific kitchen," says Daniel. "The metal, which is a cold-rolled sheet of blackened steel, is a unique material that will develop a patina over time, but will also be super durable-and again, very cost effective." 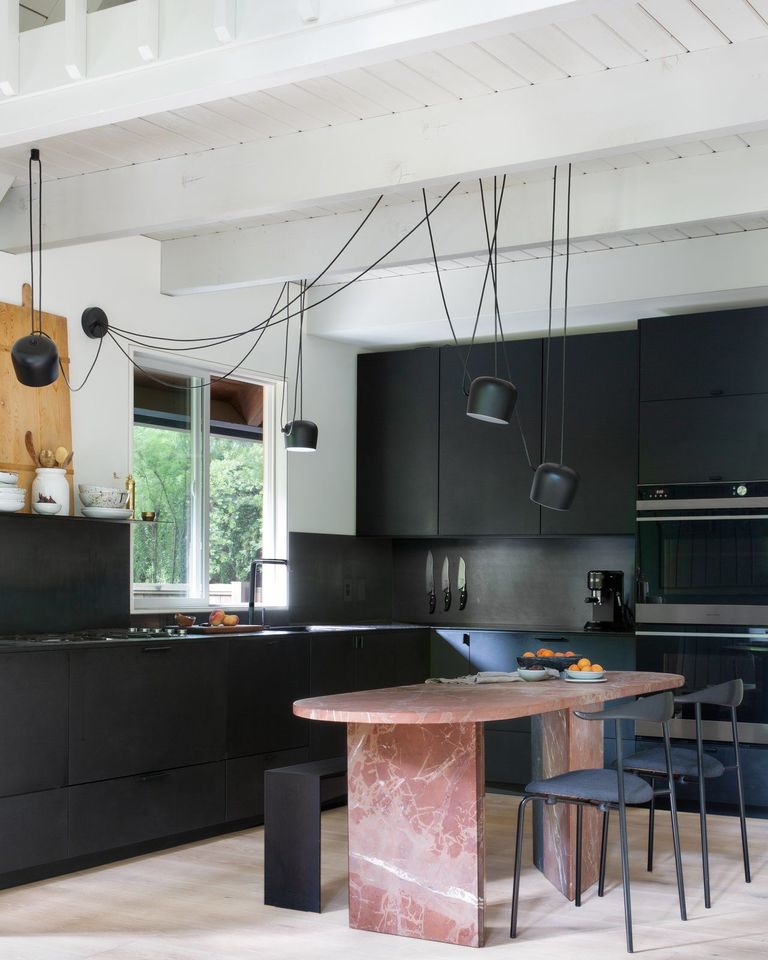 The blush-colored Rojo Alicante marble table in the center of the kitchen doubles as a dining table and kitchen island. A Craiglist score for $200, the table is another kitchen hack conceived by the architects. "It was really a diamond in the rough. Originally, it was a rectangle shape, in a weird ’90s, Italian kind of style, covered in a thick, resin-like finish that made it look almost orange," says Daniel. The table was honed down to soften its color, and its top was reshaped with rounded corners. 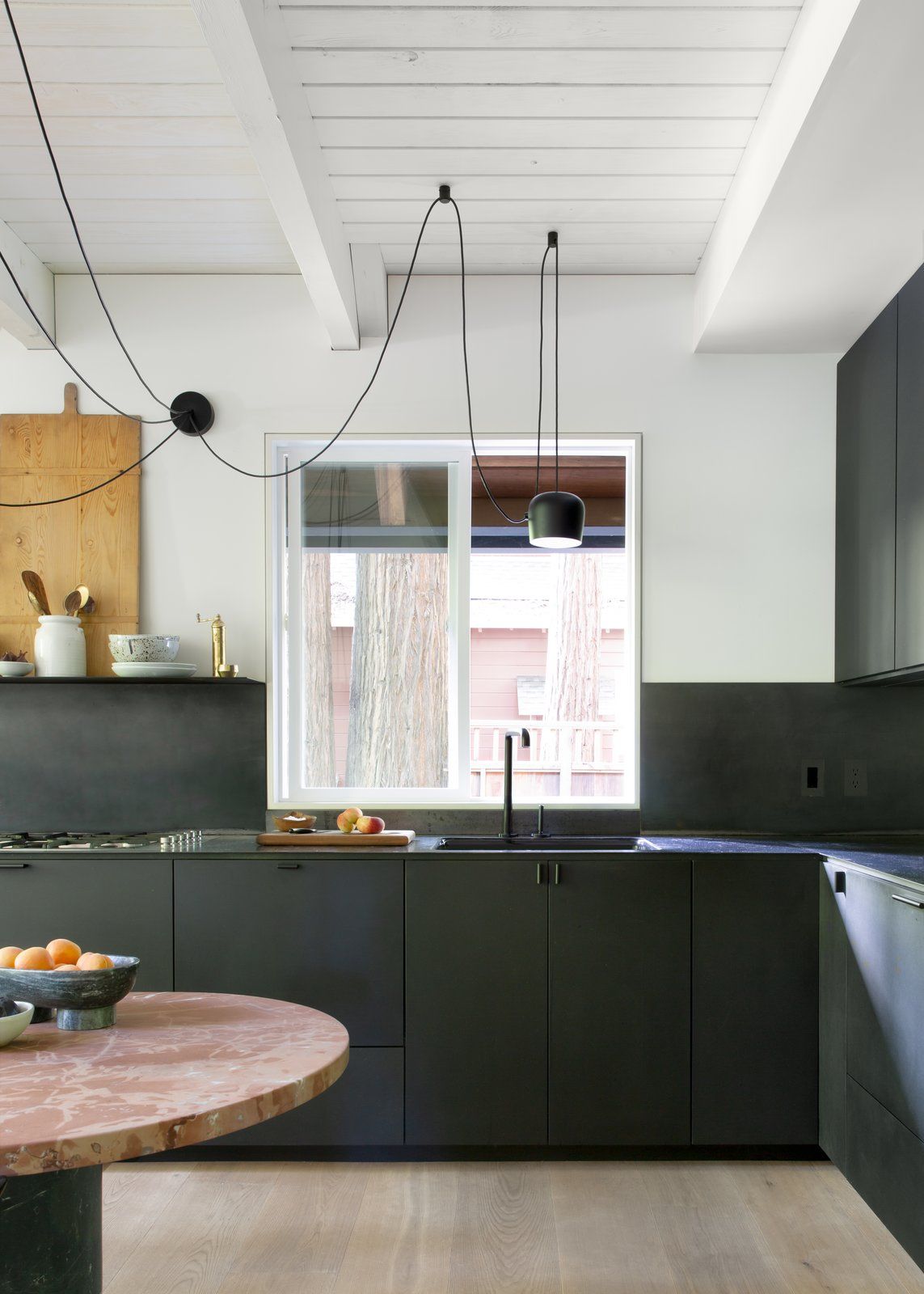 Black fixtures and Fisher & Paykel appliances blend seamlessly into the cabinetry. The lack of a large fridge helps give the kitchen its streamlined and minimal appearance. The couple carefully integrated appliances to make the small space fully functional for entertaining. Two CoolDrawers are tucked under the counter to chill wine and store enough food for the weekend. Two ovens allow home cooks to bake bread and roast meat simultaneously. "It just works really well for us," says Daniel. "Our counter space is at a premium, and we just didn’t need a giant refrigerator. This way, we can have the L-shaped counter. That was a very strategic decision-it doesn’t need to be more than what it is."

The 1,088-square-foot cabin originally had two bedrooms and one bath. A contractor was brought in to frame and drywall a bathroom on the lower level in the second bedroom’s closet. 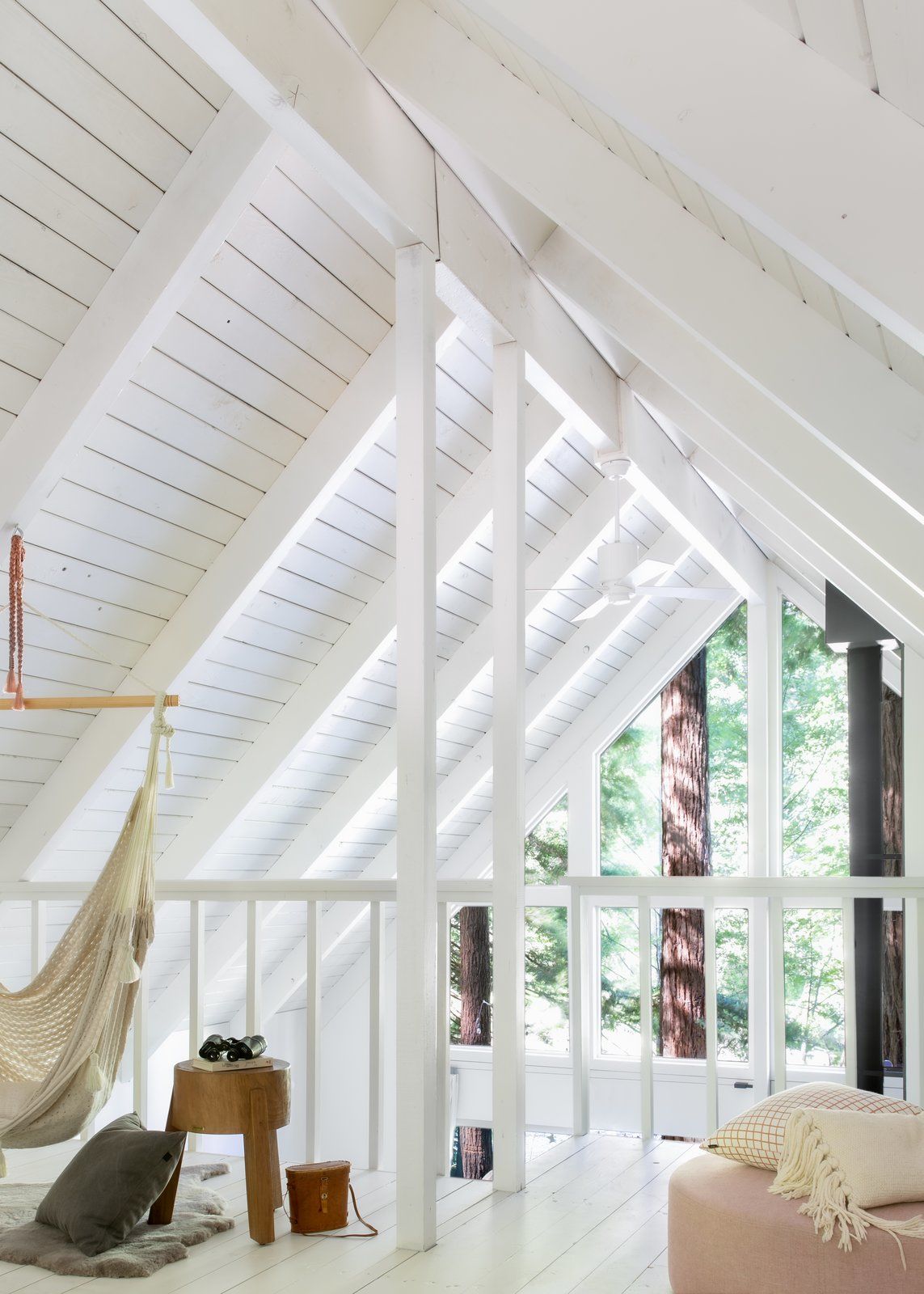 A hammock swing that the couple picked up on a trip to Mexico hangs in the lofted bedroom.

The Eppersons’ overall goal was to transform the dark cabin into a bright and airy space. "It is very shaded by the trees, which is beautiful," says Brit. "But we wanted to make it more of a lantern of light in the middle of the woods. That is what drove a lot of our design decisions-trying to make it as open and bright as possible."

After the cabin was gutted, Brit and Daniel painted the walls and wood ceiling in Sherwin-Williams Alabaster to reflect the natural lighting that filters through the forest. Light European oak floors warm up the all-white space. 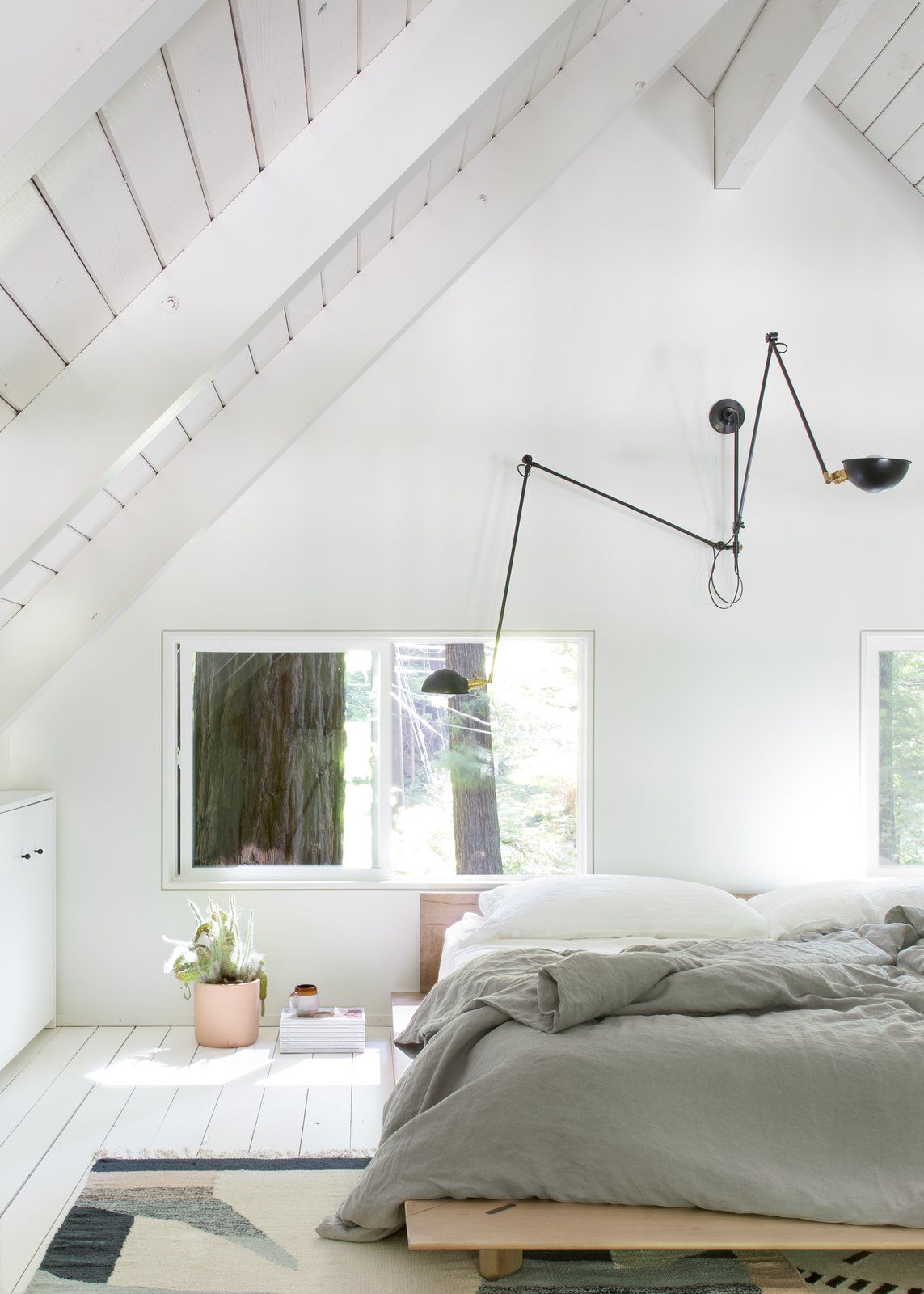 The lofted bedroom is outfitted with soothing textiles, a WO & WÉ light fixture, and IKEA cabinetry.

"Having this brilliant white box in the woods allowed us to maximize the effect of any sunlight we could bring in," says Daniel. "So that became the shell within which we were working, and we could play with contrasts or soft tones of color."

The blank canvas also gave the couple the opportunity to display their collection of artistic furnishings. As furniture lovers, the couple took time to cherry-pick exactly which pieces they wanted to showcase in the space. 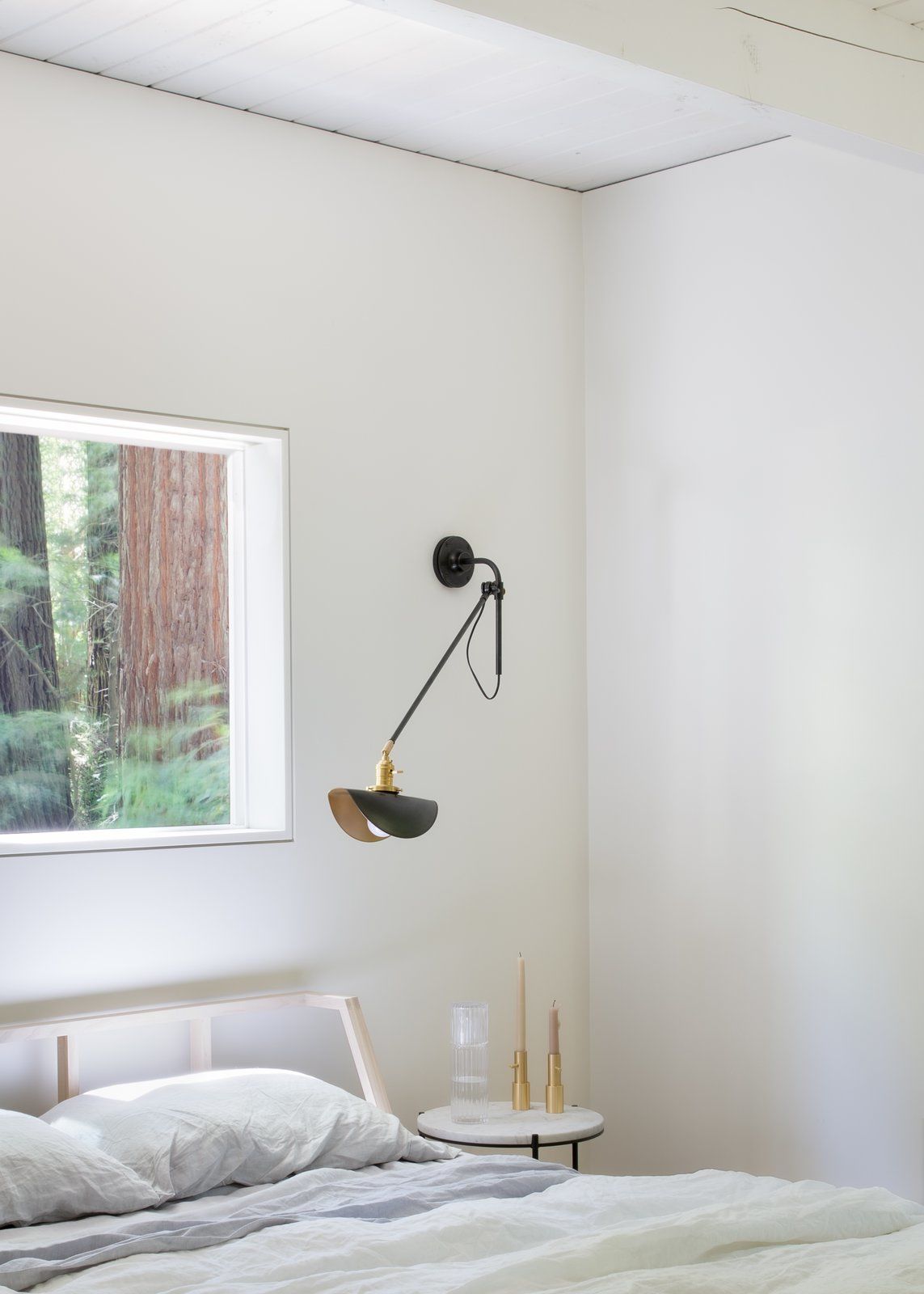 Custom furnishings are found throughout the home. In the downstairs bedroom, an ash bed frame is paired with a side table by Barrett Karber. A WO & WÉ fixture provides lighting for reading in bed.

"Those were marital negotiations between two designers," says Brit with a chuckle. "We both love furniture. It was a slow process. Everything is really personal."Most of the furniture was built by the couple or Brit’s brother Barrett. Other decorative elements were collected over time-and through their travels. The art on the walls comes from Creativity Explored, a nonprofit art organization for developmentally disabled artists, where Brit sits on the board of directors. 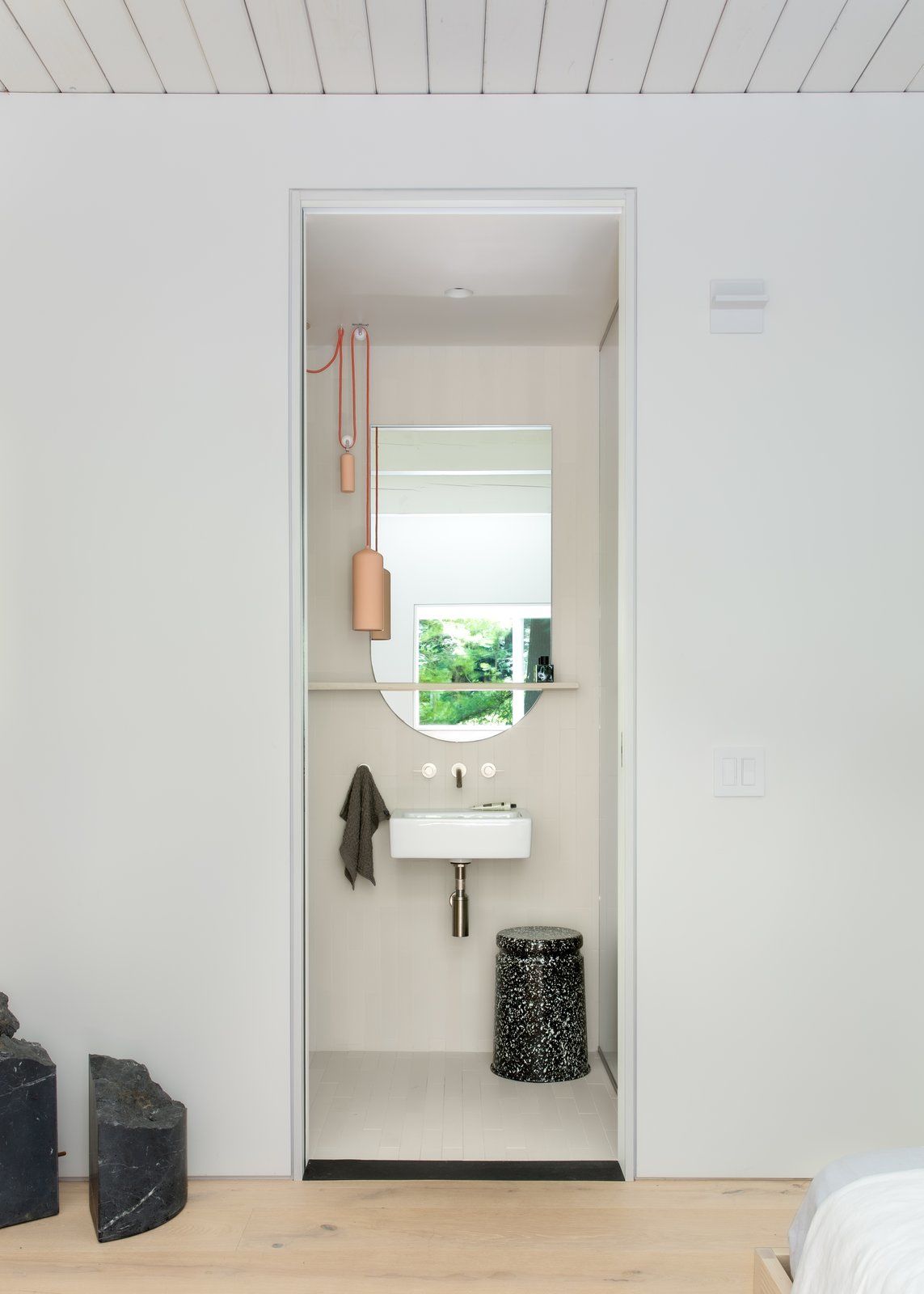 In the downstairs bedroom, a closet was transformed into a full bath.

To create warmth and intimacy within the all-white space, the Eppersons used black architectural details to delineate the kitchen and living room as cozy gathering areas.

A Duravit sink is paired with a Kohler faucet.

"The key to the design ended up being the spaces where the fire is lit, where the people gather, and where the warmth is," says Daniel. "In those areas, we wanted to have a kind of ‘inverse beacon,’ where the dark calls from the light." 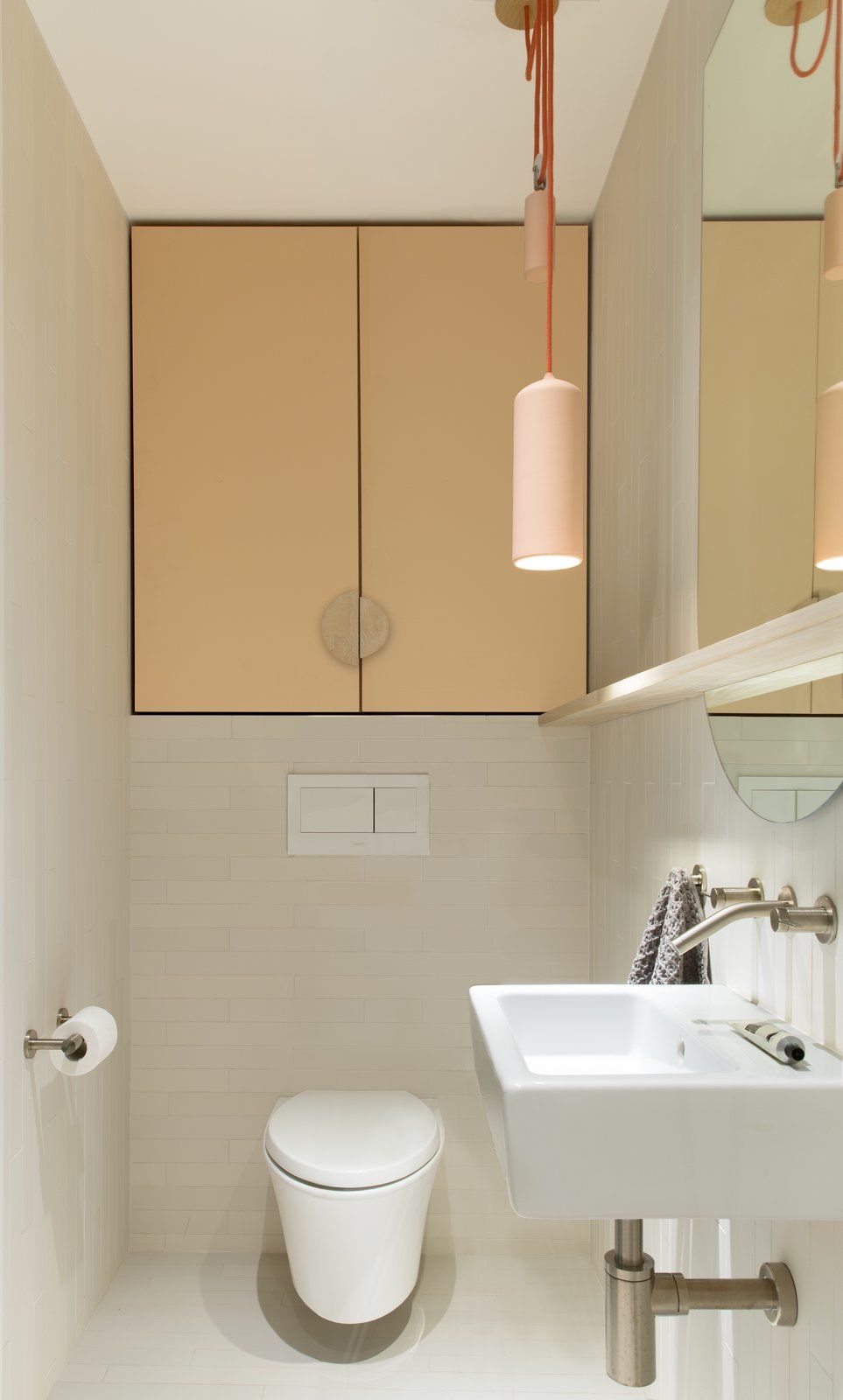 Above the Kohler toilet hangs a custom cabinet by Barrett Karber. The contemporary mirror and shelf were also made by the furniture designer.

A black stone fireplace surround extends 18 feet to the ceiling, and black cabinetry, countertops, and backsplash envelop the kitchen. The juxtaposition of rustic white with sleek, modern black creates a striking and sophisticated visual tension. 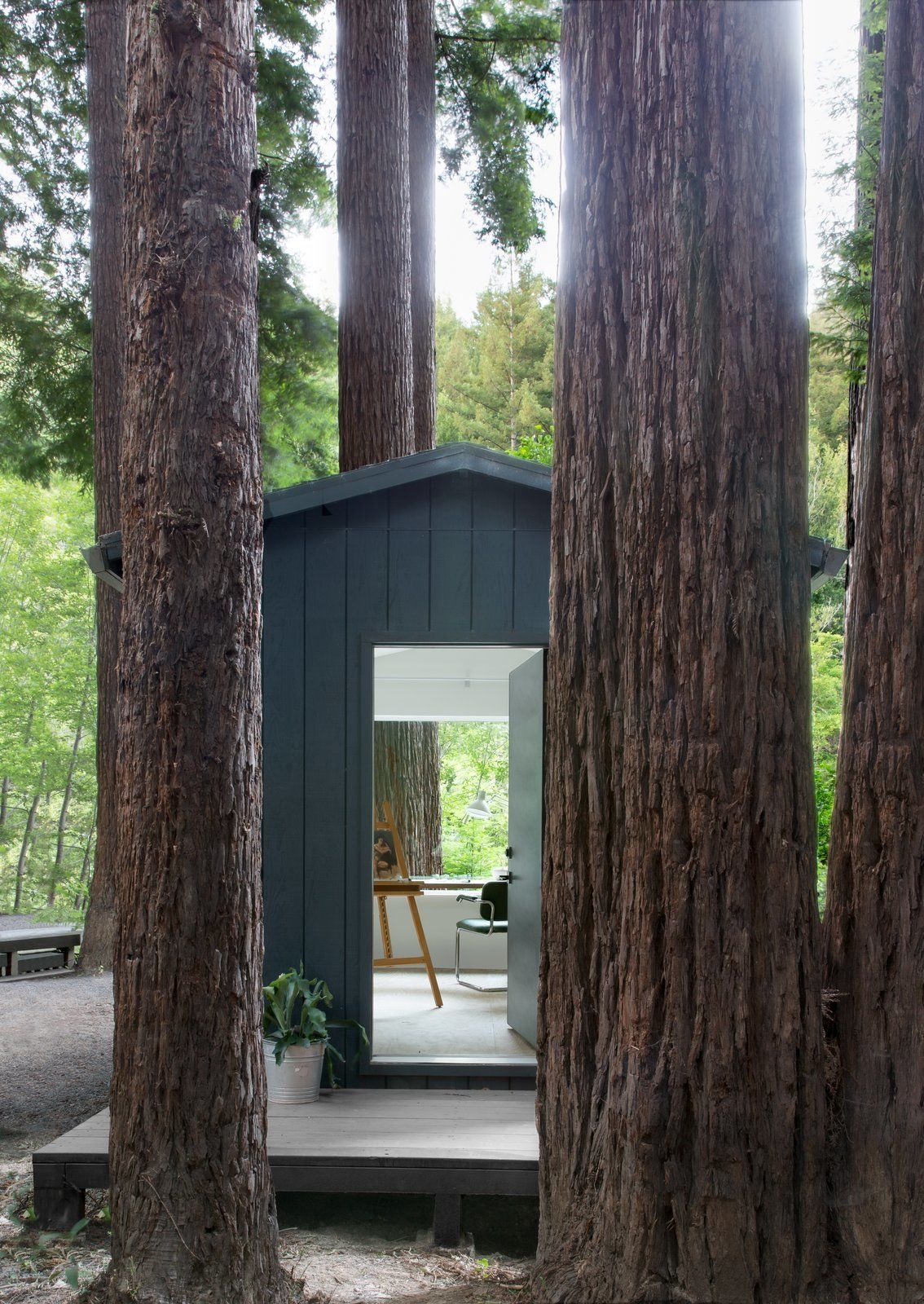 A small, dilapidated 10' x 12' neighboring structure was brought back to life and is now used as an art studio and guest cottage with a Murphy bed. In total, the property can sleep 10 people comfortably.

While modernizing the cabin was the couple’s main priority, Brit and Daniel also worked to keep some of the A-frame’s original details, such as the wood-burning stone and the wood ceiling, in order to highlight the structure’s origin.

"A-frames are so nostalgic," says Brit. "We are drawn to them. It was great to find this place and feel like, ‘Oh good, we can work with this.’"