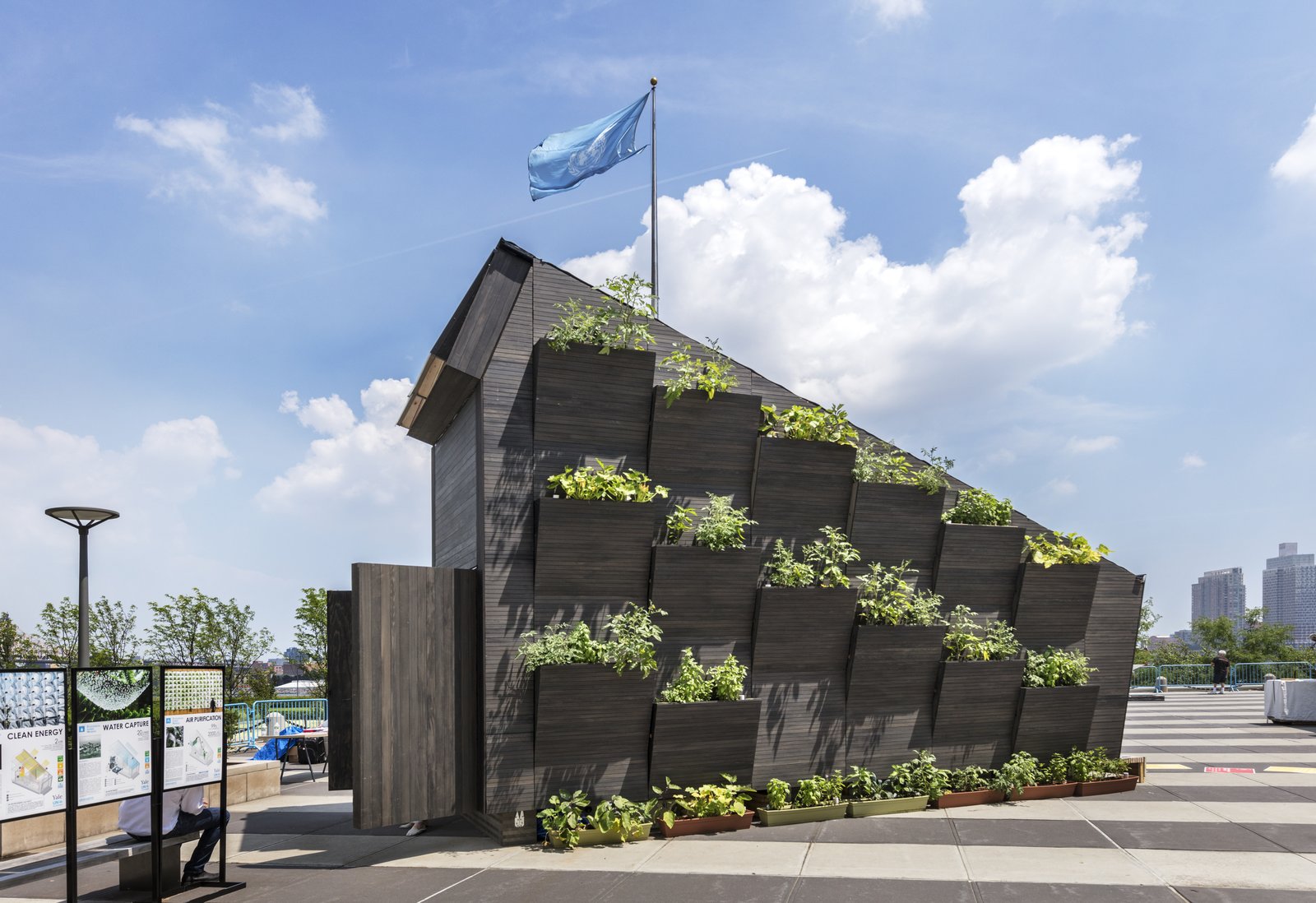 This Tiny, Off-Grid Prefab Home Grows Its Own Food

Gray Organschi Architecture and the Yale Center for Ecosystems in Architecture team up to create the Ecological Living Module, a self-sufficient tiny home, in just eight weeks.

Worldwide, an estimated one billion people live in informal settlements that often lack reliable water, sanitation, food, and electricity-and yet, the housing sector already contributes more than a third of global greenhouse gas emissions. How can design and architecture alleviate this complex problem? 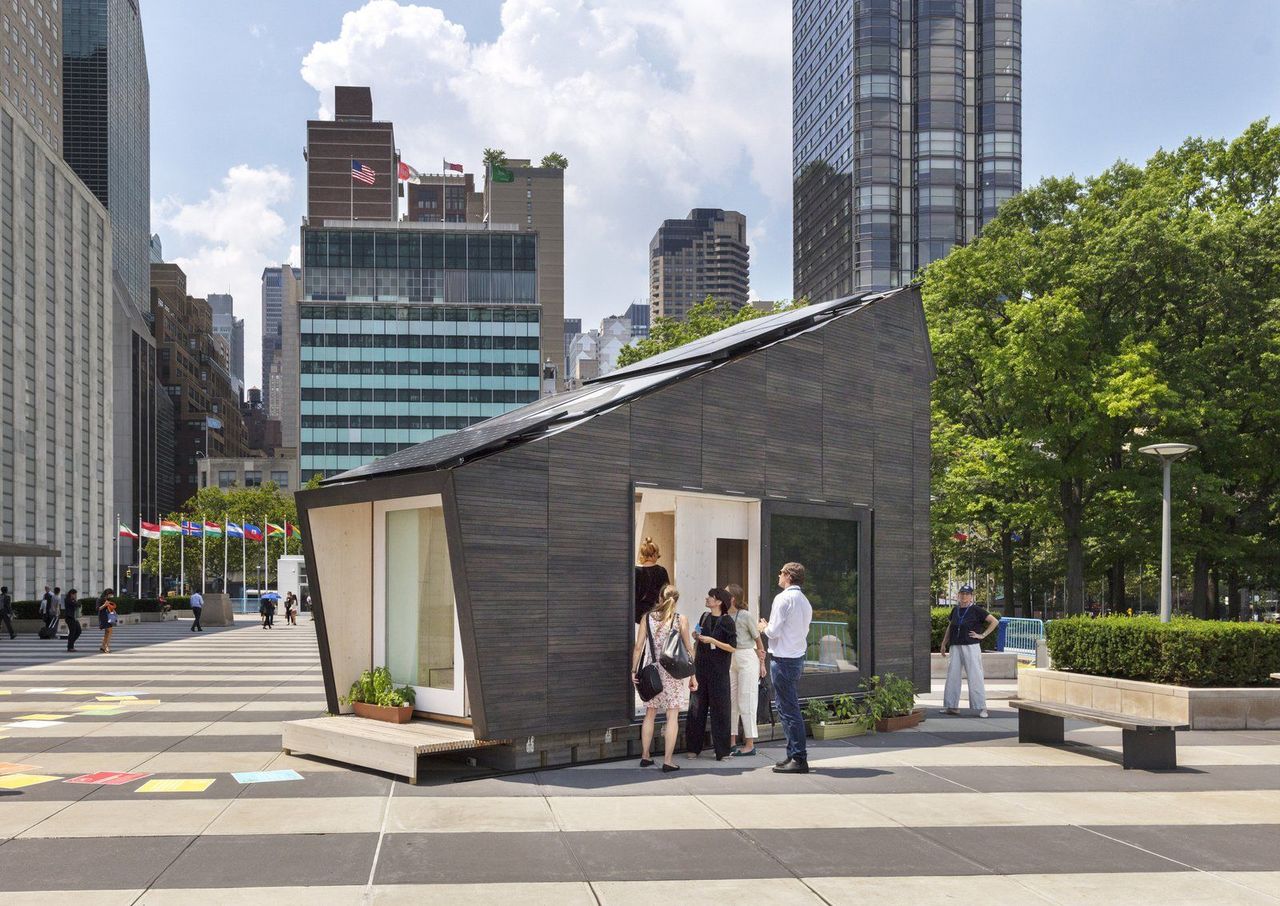 The Ecological Living Module (ELM) was installed at the UN Headquarters in New York City for two months.

In the summer of 2018, the Yale Center for Ecosystems in Architecture and the New Haven, Connecticut–based architecture firm Gray Organschi Architecture addressed these issues through the design and construction of a 230-square-foot tiny home, the Ecological Living Module (ELM), as a housing prototype. The model home was installed at the UN Headquarters in New York and was designed to take advantage of sustainable materials, green technology, and simple construction methods—and was also efficient, adaptable, and fully off-grid. 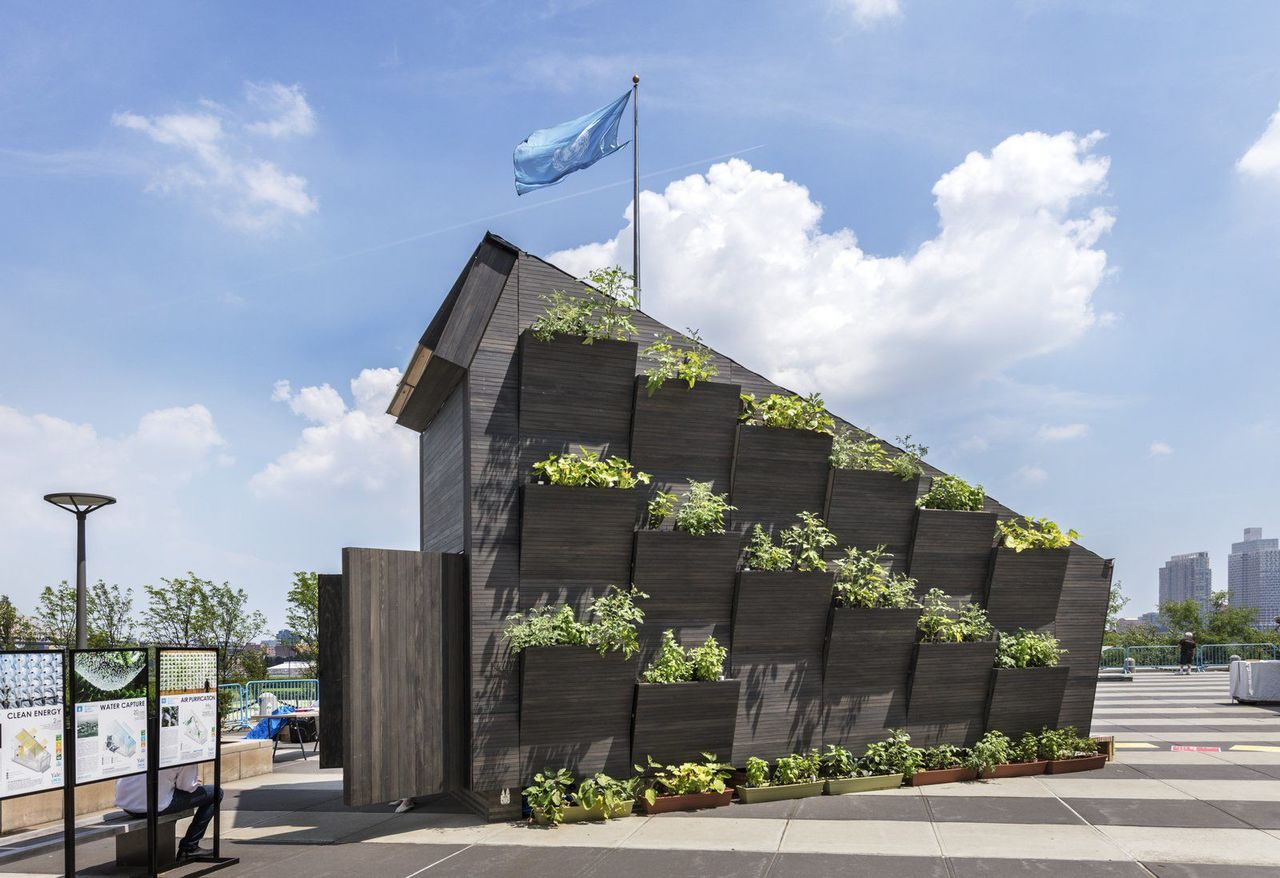 The tiny home was oriented to best take advantage of the sun, and an entire facade of the building was designed to hold greenery.

The micr0-home was first prefabricated in an off-site production facility. It was then transported to the site-UN Plaza in New York City-on the back of a 22-foot semi. The home was set on a lightweight foundation, and the roof system was pivoted up to reach its final height of 16 feet, which creates a double-height space on the interior for a sleeping loft. Once the roof is raised, prefabricated wall panels were installed by hand on the interior. 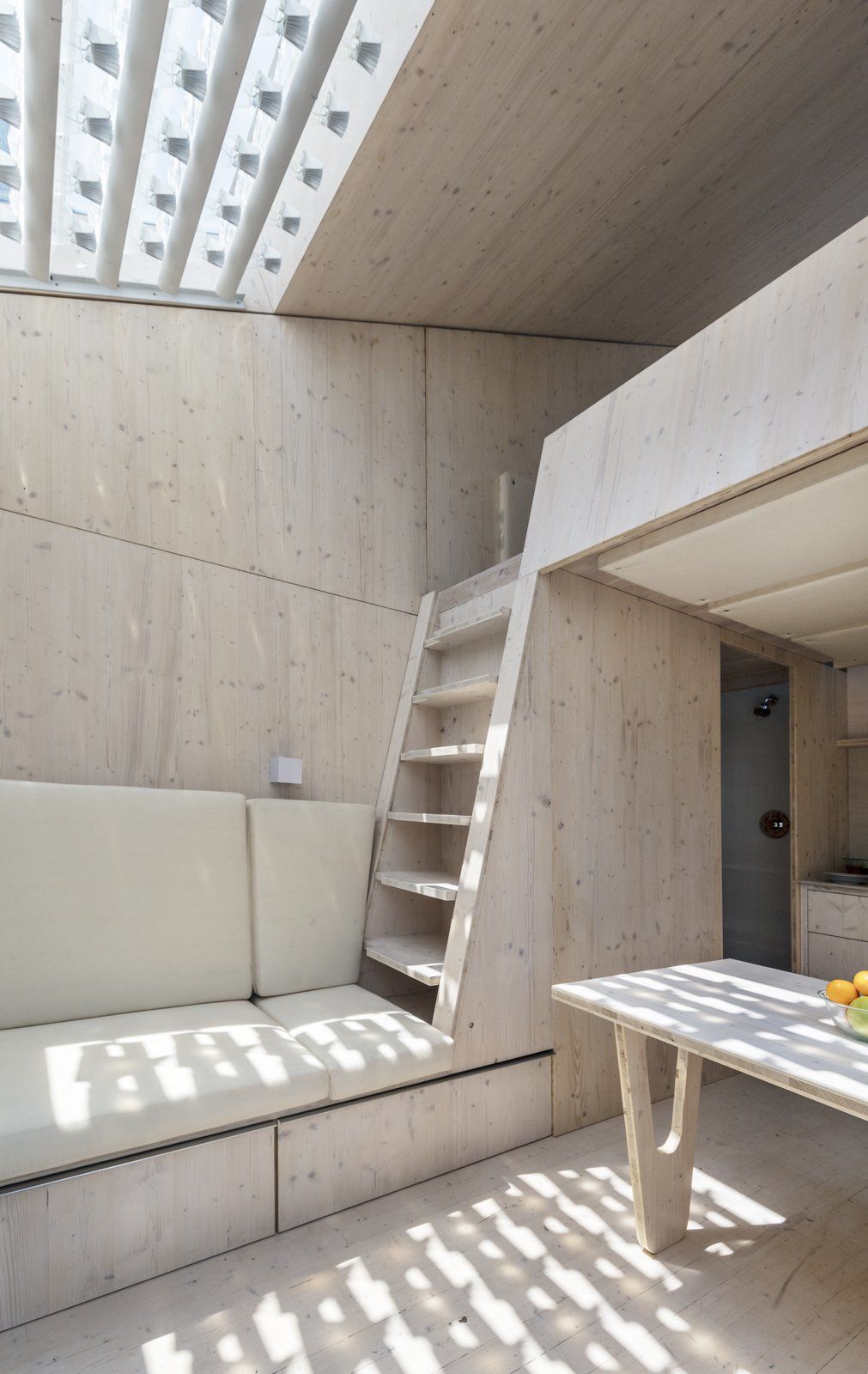 The interior is clad in wood, with a lofted bed at the taller end of the unit.

One of the design team’s goals was to reduce the energy and resources not only during the construction of the ELM, but also its operation and entire life cycle. This was done by using renewable, biogenic materials and systems that used on-site water, air, energy, and waste management. The building also employs traditional methods to reduce solar heat gain and promote passive ventilation through its form and orientation; the careful orientation of PV and Integrated Concentrating Solar Facade systems also allow for maximum sun exposure. 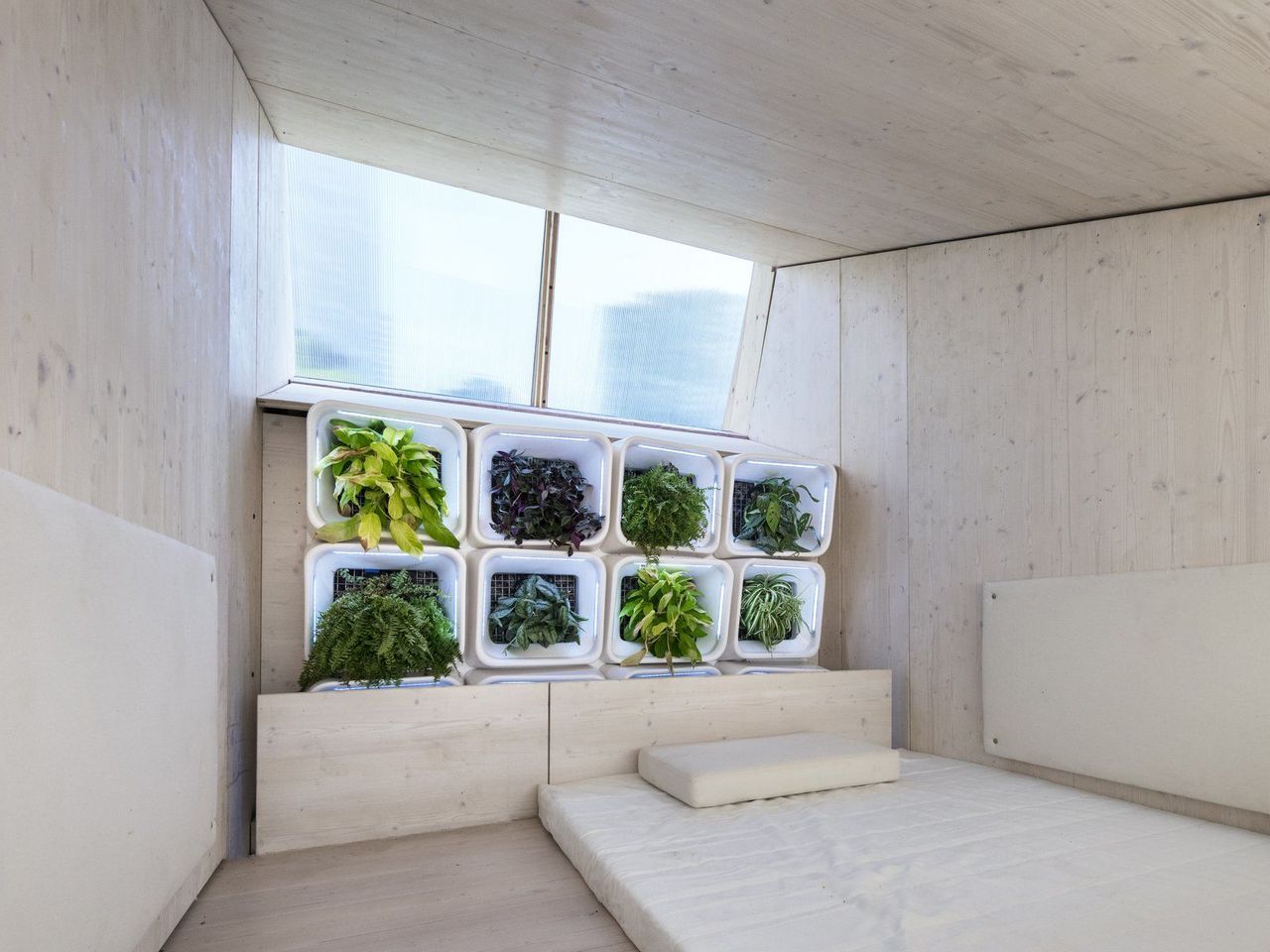 At the top of the lofted area is a window opening to allow in natural light, and passive cooling and ventilation. 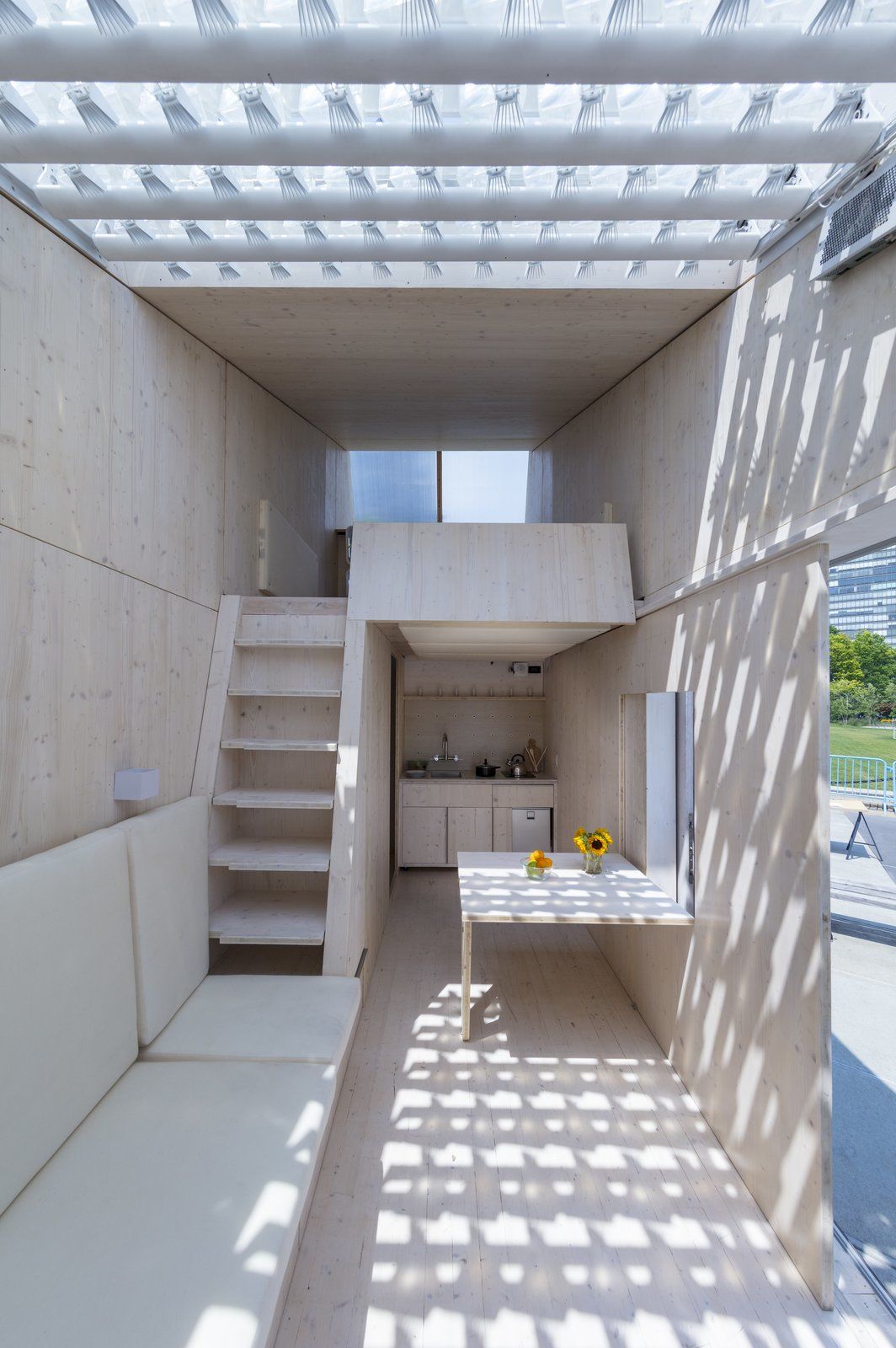 Interior wall cladding was installed by hand after arrival on site.

The home boasts various systems, including a solar system that provides 100 percent of the building’s energy needs; a rainwater harvesting system that captures 80 percent of rainwater from the roof and filters it to be reused as potable water; a dehumidifier that recaptures water from the air during hot summer months; and a graywater system to irrigate food-producing plants on the building’s west facade. 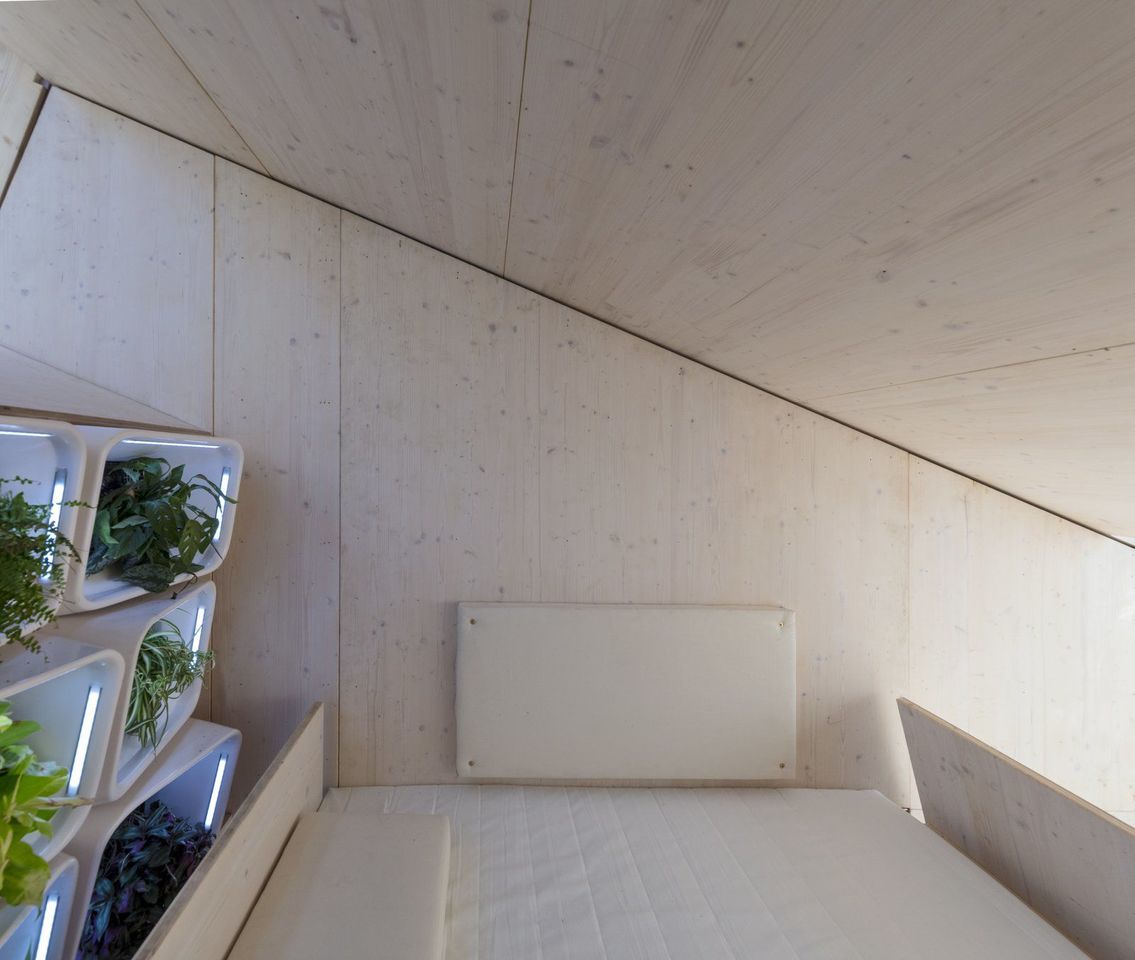 Originally completed in eight weeks for design, procurement, construction, transportation, and installation, the home was designed to showcase innovative solutions to for the UN’s Sustainable Development Goals (SDGs) at the High-Level Political Forum on Sustainable Development. The team is now in discussions with the UN and Yale about future opportunities to reiterate or scale up the project. 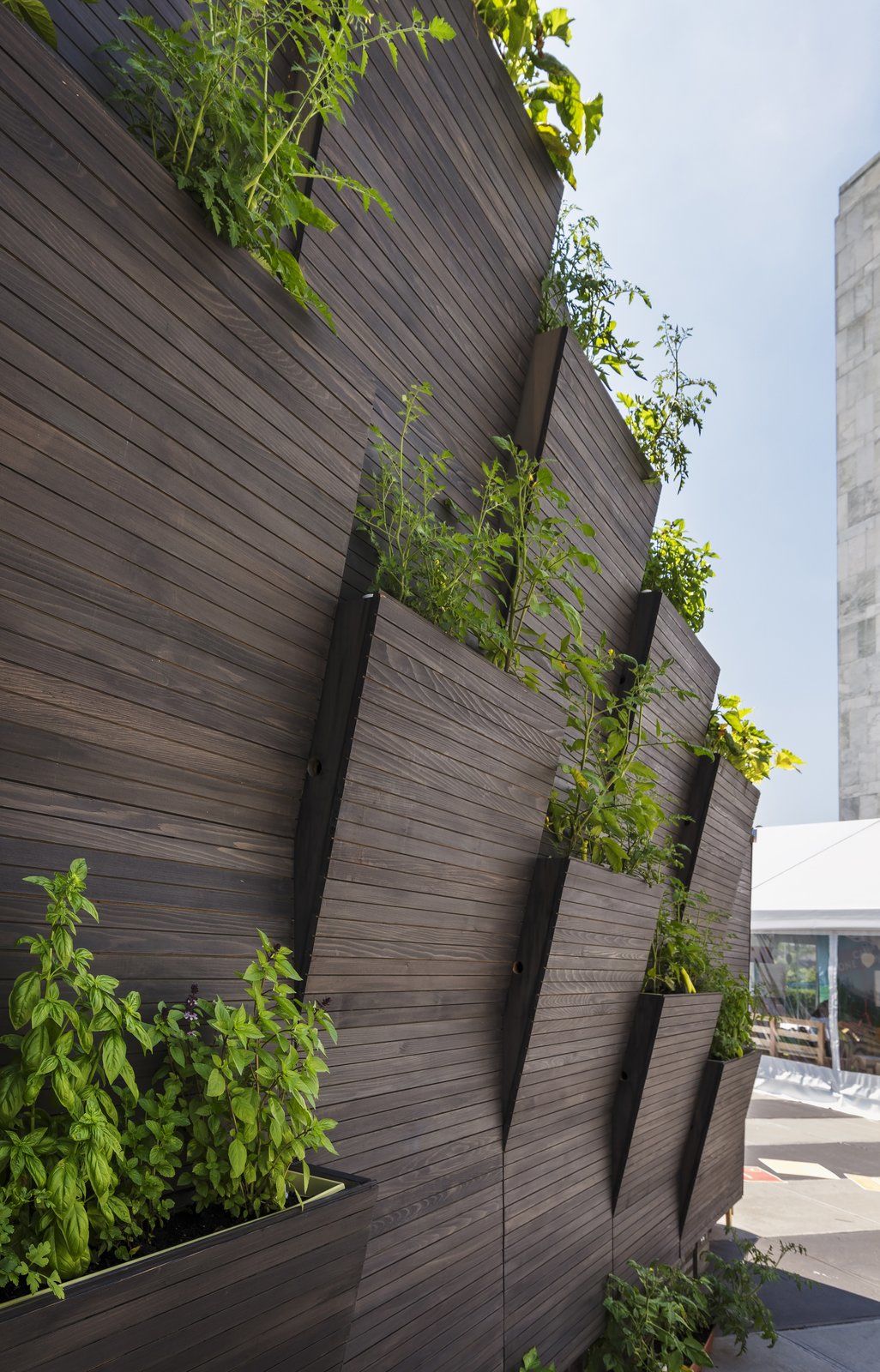 The micro-farming wall was designed for nutrient-dense provisions, including fruits and vegetables.

Ultimately, the ELM’s off-grid systems and reduced carbon footprint during production and throughout its lifecycle have a real potential to address a number of housing and sustainability issues around the globe. If produced at a large scale, the team feels that the homes could be produced for under $50,000 per unit. 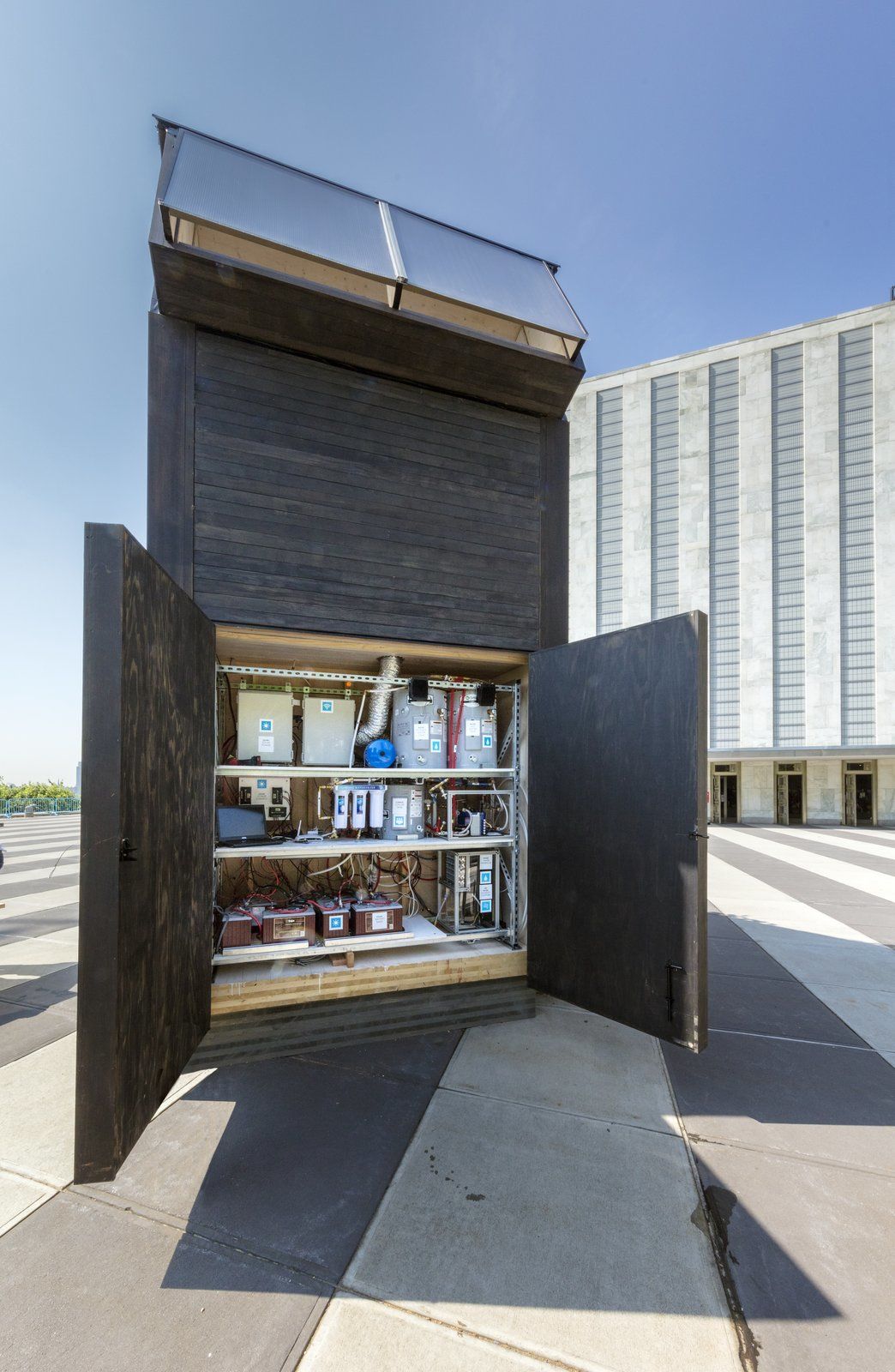 The building's clean energy is generated from combined PV solar panels and Integrated concentrated solar panels; together, they produce two kilowatts of clean, free, on-site energy, which is enough to make the house energy-efficient for four people. 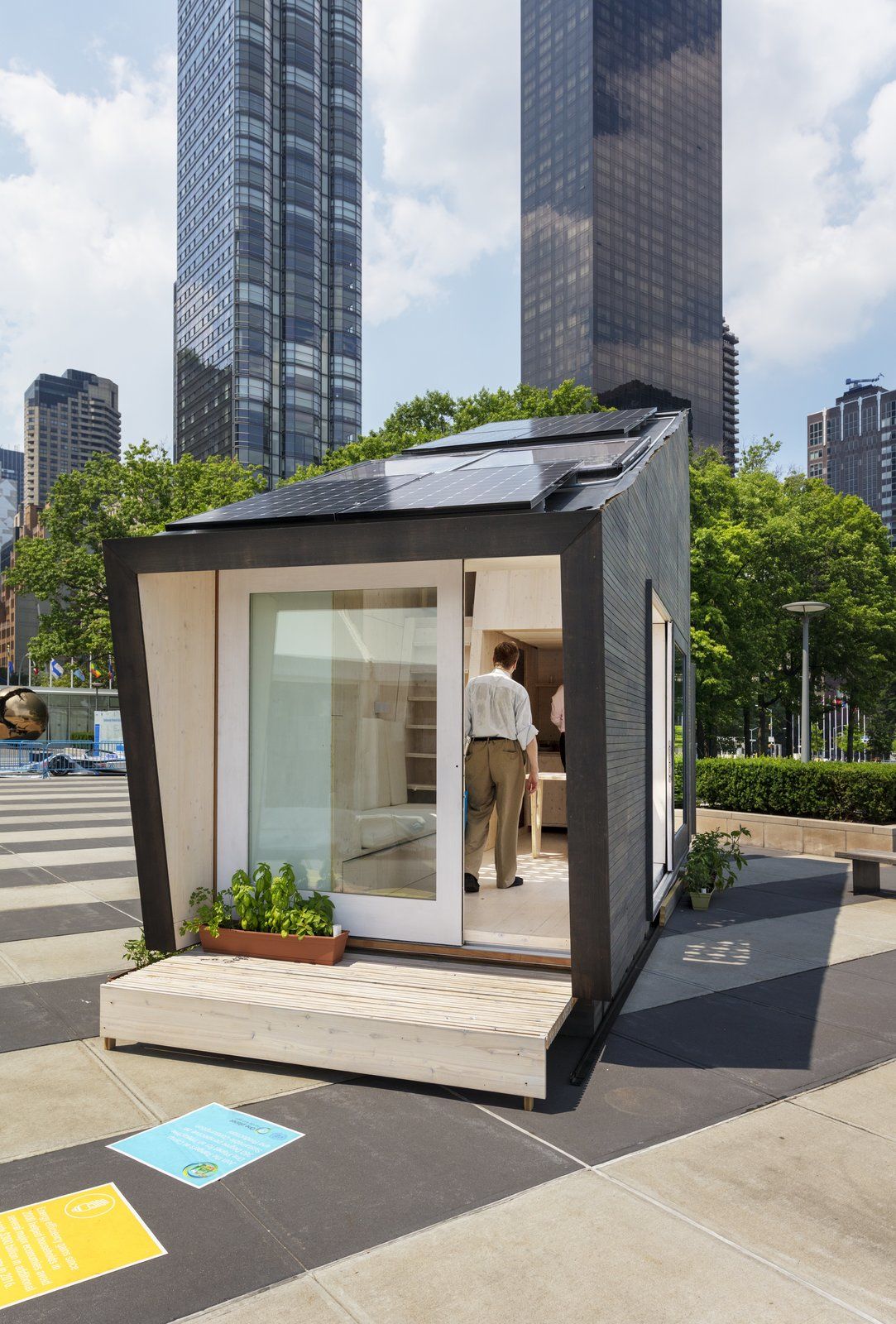 Because the unit was temporary, it didn't follow the typical permitting process of a micro-unit or home in New York City; what's more, because it was installed on land owned by the United Nations, local and federal codes and permits did not apply.