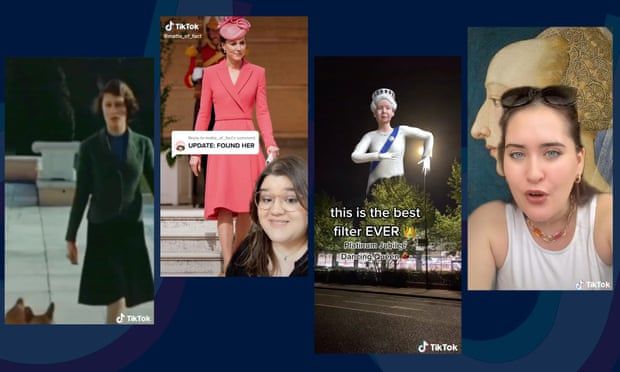 TikTok and tiaras: the youngsters leading a new generation of royalists

Charlie Richardson, 19, known on TikTok as notaroyalexpert, has been working tirelessly over the past few weeks to update his online audience on the Queen’s recent appearances, as well as dispelling rumours that she has died and is now a CGI hologram.

His recent edits include footage of the Duchess of Cambridge and other royals shaking hands at a Buckingham Palace garden party to the soundtrack of Lizzo’s dancefloor anthem About Damn Time. Another shows an avatar of the Queen spinning round to Abba’s Dancing Queen. Naturally, he is already planning what to upload on the momentous day of Her Majesty’s platinum jubilee.

Richardson is one of a new generation of royal TikTokers who are gaining hundreds of thousands of followers on the app, highlighting the appetite online for updates on and analysis of the British monarchy, especially among younger audiences.

TikTokers are, for the most part, positive about the royals. “After I began posting about royalty, my followers quickly grew – more than I could imagine,” Richardson said. Now the English student has more than 216,000 of them.

“The majority of the reactions I have from my posts are positive, which is great since it’s mostly young people on the app. There are, of course, some negative comments, but they will always be there, so I just try to stay positive and talk about what interests me.”

Amanda Matta is the person behind matta_of_fact, a TikTok channel with 687,000 followers. “I would describe my channel as a mix of royal commentary, royal history, royal fashion – whatever strikes my fancy,” she said.

Unlike Richardson, whose videos are complimentary about the family, Matta describes herself as “the most negative royal TikToker”. The 27-year-old, based in Pennsylvania, said: “I don’t shy away from criticism of the royal family. I think you have to look at them holistically and put things into context, and what their actions mean for marginalised communities, even though they [the marginalised] are supposedly part of their fold through the Commonwealth.” 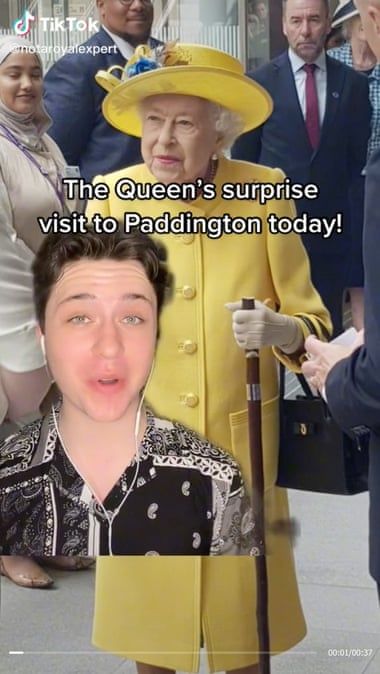 TikToker Charlie Richardson, with a clip of Her Majesty.

Matta first began posting about the royals after the Duchess of Sussex’s interview with Oprah Winfrey in March 2021. Among the many revelations made by Meghan Markle and Prince Harry was an alleged incident where a member of the family raised concerns over their son’s skin colour.

The TikToker’s first video addressed a conspiracy theory that the Duke of Cambridge was the one who made these comments. Since then, Matta has posted both positive videos (Queen Elizabeth the animal lover, and the fairytale moments from Harry and Meghan’s wedding) and slightly more critical (Will and Kate’s recent bungled Caribbean tour). “There’s always a lively discussion in my comments,” she said.

“I try to be somewhere in the middle when it comes to views of the royal family – neither pro or against, but I do recognise that I am more critical than a lot of people on TikTok. I think that’s probably because I’m American,” she said. Nonetheless, the family were always a “cultural touchstone” to her, growing up.

Within this emerging online scene there are extremely niche TikTokers like Rosie Harte, creator of The Royal Wardrobe, a channel dissecting royal fashion throughout history.

The 20-year-old from Bristol spends half her time uploading TikTok videos, having accumulated 329,000 followers, and the other half studying art history. “The history of the royal family is so eyecatching and colourful. When you’re talking about royal fashion, you are talking about the most expensive, ridiculous glittery fashion you can imagine.”

“My followers are like magpies. If you put a tiara at the beginning of a video, it is definitely going to perform well.” She plans to do a special video for next week on the Queen’s jubilee looks throughout history.

Her unique TikTok angle has led to a book deal with Headline Publishing. The Royal Wardrobe will be published next year, and continues her work on the history of royal fashion.

Aside from an interest in the royals, all three TikTokers were excited about the platinum jubilee, and its impact on young peopleand are unified in how they are ringing in the landmark event: Harte, Richardson and Matta all plan to celebrate with garden parties and lots of friends and family around.

“This is not the first jubilee the royal family has celebrated, but the last one was 10 years ago, when TikTok didn’t exist and other social media platforms were in their infancy,” Matta said. “Young people really won’t have seen a spectacle to this degree outside of a royal wedding, so I think it’s a really interesting moment in time to just get a feel for the true majesty, no pun intended.”