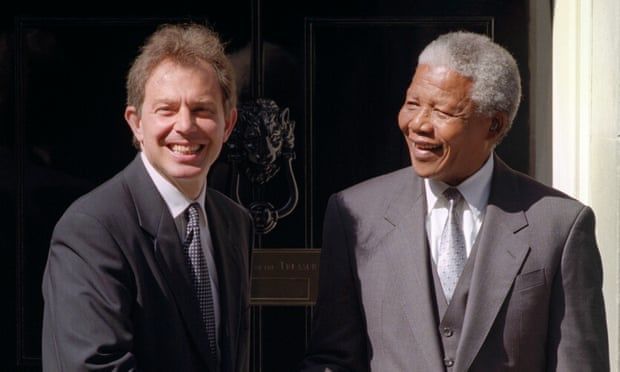 Blair wrote to then South African leader in 1997 after aides said raising issue at summit in Scotland would be ‘pretty disastrous’
Tony Blair failed in urgent attempts to prevent Nelson Mandela raising the issue of the Lockerbie trial at a Commonwealth summit in Edinburgh, which aides warned would be “pretty disastrous”, previously classified documents reveal.

The Foreign Office, on discovering Mandela was visiting Libya en-route to the Commonwealth heads of government meeting (Chogm) in Edinburgh in October 1997, warned of a “sensitive situation” if the South African leader spoke out against UK government’s plans to hold the trial of two suspects in Scotland.

Newly released National Archives documents reveal the urgency for Blair to write or speak to Mandela “to extinguish any thoughts he [Mandela] may harbour of stimulating a collective discussion of Lockerbie in the Chogm plenary” in Scotland, “where feelings on Lockerbie run high”, one FCO briefing reads.

“That would be pretty disastrous.” John Holmes, Blair’s principal private secretary, then wrote to the prime minister.

Britain wanted any trial in Scotland, resisting attempts to hold it in a neutral third country, which would require primary legislation and risk collapse for procedural reasons. The UK proposed instead that international observers should be invited to attend a trial in Scotland.

Mandela planned to cross into Libya by land from Egypt, thus avoiding breaching sanctions, and the FCO judged it “unwise” to ask him to change his plans. Blair’s letter was faxed “to reach him before he left”, according to a handwritten No 10 memo.

In the 17 October 1997 letter, Blair acknowledged Mandela’s suggestion the suspects be tried in a third country, and urged him not to raise the subject in Edinburgh.

“Lockerbie is of course a particularly sensitive subject in Scotland because of the deaths on the ground of 11 inhabitants of the small town of Lockerbie, in addition to the 259 people on board the aircraft. So I hope we can avoid a discussion of the issue at Chogm itself – we have a lot of other things to talk about. But I would welcome further private discussions when we meet next week.” Blair wrote.

But his request was ignored.. At Chogm, Mandela warned: “No one nation should be complainant, prosecutor and judge.”

A compromise solution was later agreed, for a trial to be held at Camp Zeist in the Netherlands, governed by Scottish law, and Mandela began negotiations with Muammar Gaddafi for the handover of two accused in April 1999.

The former Libyan intelligence officer Abdelbaset al-Megrahi, who was found guilty in 2001 of mass murder and jailed for life with a minimum term of 27 years, was the only person ever convicted of the attack. He was released from prison in 2009 on compassionate grounds having been diagnosed with prostate cancer.