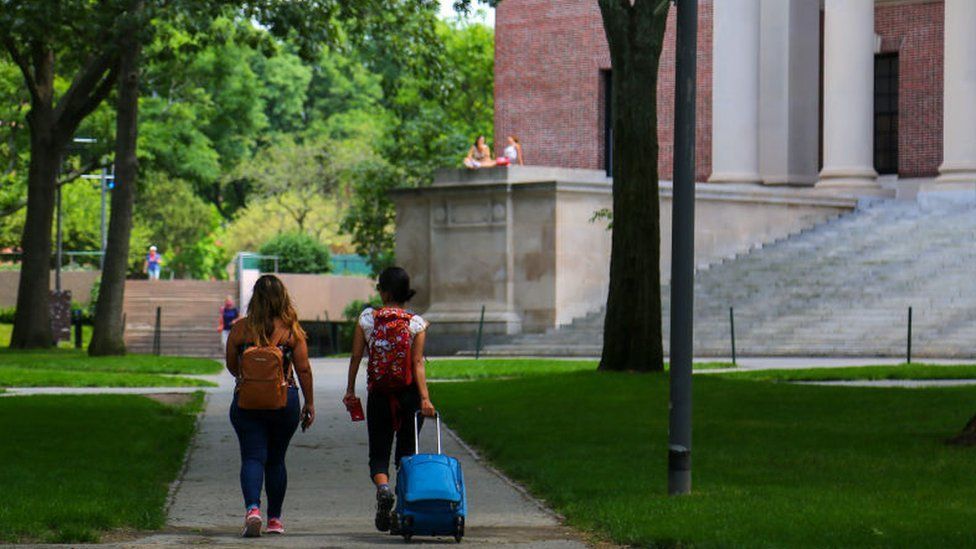 How the court rules could pave the way for a historic end to policies meant to help applicants previously seen to face discrimination.

The cases concern admissions at Harvard and the University of North Carolina.

The schools are accused of discrimination against Asian and white applicants.

The conservative-leaning Supreme Court is seen as likely to issue a decision that would signal an end to affirmative action, a practice that has been used to encourage racial diversity in many schools for decades.

The court has previously upheld racially-conscious admissions, most recently at the University of Texas in 2016. Decisions for the upcoming cases are expected by mid-2023.

What are the Harvard and UNC cases about?

In a lawsuit against Harvard University, a group called Students for Fair Admissions (SFFA) alleged that the institution unfairly weighs race when considering applicants, forcing Asian-American students to meet a higher bar than their peers from other racial groups.

The SFFA - which is led by conservative activist Edward Blum - opposes affirmative action, described as a proactive policy to include racial minorities that historically faced discriminated in the US.

Harvard has repeatedly denied the charges and said it uses a "holistic" strategy to evaluate applicants, with race as one of only a number of factors - although it argued that race-conscious admissions are permissible by law.

The university is one of the top-rated and most selective private universities in the US. It admitted 2,320 students from over 57,000 applicants for its most recent batch, the class of 2025. Of these, 25.9% were Asian American.

The school was cleared of violating civil rights by a federal court in October 2019.

Harvard President Lawrence Bacow denounced the decision to review the case, saying it "puts at risk 40 years of legal precedent granting colleges and universities the freedom and flexibility to create diverse campus communities".

A separate lawsuit filed by the SFFA against the University of North Carolina (UNC) alleged that white applicants were being discriminated against in an admissions process that favoured black, Hispanic, and Native American applicants.

UNC, a publically funded school, has denied the charges and said its admissions process was lawful - a claim that was affirmed in a lower federal trial court.

A spokesperson for UNC told BBC it looks forward to "defending the university's holistic admissions process before the US Supreme Court".

What has the court said before?

The cases will mark the first time the Supreme Court hears a university-focused affirmative action case since 2016, when it determined that officials at the University of Texas in Austin could consider race a factor in its admissions process.

Several members of the current conservative-leaning Supreme Court, however, have previously voiced their disapproval of race-based admissions processes at American universities.

A Gallup poll released in July 2021 found that about 62% of Americans support affirmative action policies - the highest number in 20 years. It did not, however, specify whether this meant at schools or jobs.

Forty-four years ago, the US Supreme Court ruled that state colleges could not use quotas to set the racial balance of their student bodies. Since then, the court has allowed public universities to devise "holistic" admissions processes that indirectly achieve the same results.

The two cases the Supreme Court just agreed to consider are direct assaults on that legal framework, which has been stable for several decades. What's more, it could shake up the college admissions process not just for public institutions, but for all universities, including the nation's most prestigious private colleges.

Given that the Biden administration specifically recommended the justices not take these cases because they challenge established precedent, it seems possible, if not likely, there is a majority of the court ready for a major change.

The admissions policies of selective colleges, as well as prestigious high schools, has become a topic of intense debate across the US in recent years, as those institutions grapple with questions of institutional racism and the desire to reward merit.

This could become the latest example of the newly solid conservative majority on the Supreme Court flexing its legal muscle as it wades into a politically charged topic.