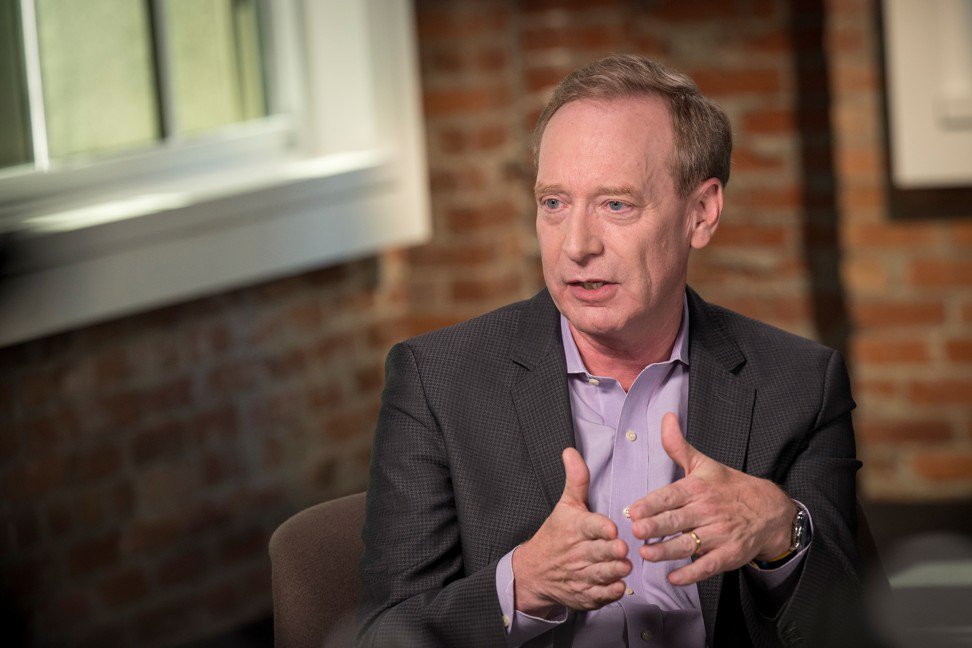 An adviser to US President Donald Trump once questioned Microsoft Corp for not spying on its users around the world on behalf of the government, the software giant’s president has revealed, as Washington continues its campaign against China’s Huawei Technologies over national security concerns.

“As an American company, why won’t you agree to help the US government spy on people in other countries?” Brad Smith, Microsoft’s president and chief legal officer, recounted how he was asked by the adviser on a trip to Washington. That inquiry is highlighted in Smith’s new book, Tools and Weapons: The Promise and the Peril of the Digital Age, without naming the person or other details about that visit to the US capital.

Smith wrote that he responded by shifting the question to Trump Hotels, which had opened new properties at the time of the meeting in the Middle East and in Pennsylvania Avenue, near the White House. “Are these hotels going to spy on people from other countries who stay there?” Smith said. “It doesn’t seem like it would be good for the family business.” The Trump adviser nodded in agreement, according to the book.

Tools and Weapons, which was released by UK-based publishers Penguin Press and Hodder & Stoughton on Tuesday, analyses the benefits and risks from advances in technology as well as Microsoft’s position in major issues, from privacy and security to geopolitics.

A Microsoft representative did not immediately respond to an emailed request for comment about Smith’s meeting with the Trump adviser.

The revelation about the Trump adviser’s inquiry in Tools and Weapons showed that the US continues to have its own issues with surveillance and cybersecurity, despite Washington’s accusations that products from telecommunications equipment manufacturer Huawei can be used to spy for Beijing. Huawei, caught in the middle of an escalating US-China trade war, has strenuously and repeatedly denied the allegations, saying that it is not a proxy for Beijing’s security apparatus.

The Trump administration, meanwhile, stepped up its campaign against Huawei, the world’s largest telecoms equipment supplier, by adding the company to the US government’s trade blacklist in May. That has restricted the Shenzhen-based company from buying hardware, software and services from American hi-tech firms, including Qualcomm, Google and Microsoft.

On August 19, the US extended a deadline allowing American technology suppliers to sell components to Huawei for another 90 days. Since then, however, the much-anticipated reprieve has provided more confusion than clarity.

Earlier that same month, the Trump administration announced a ban on US federal agencies buying equipment and services
from a group of Chinese hi-tech companies, including Huawei, ZTE Corp and Hangzhou Hikvision Digital Technology, because of national security concerns.

Smith, who joined Microsoft in 1993, described the US trade ban on Huawei as unfair and un-American, according to a report by weekly magazine Bloomberg Businessweek. He said Huawei’s blacklisting should not have been made “without a sound basis in fact, logic and the rule of law”.

In his new book, Smith wrote China is notorious for making domestic market access difficult for foreign hi-tech companies, with services from Google and Facebook blocked in the world’s second largest economy. The Microsoft president, however, also indicated that the US was increasingly building up barriers to entry, as Washington’s concerns over Chinese influence continued to grow.

There is an “increasing possibility that American officials will seek to block the export of a growing number of vital technology products, not just to China but to a growing set of other countries”, wrote Smith, adding that such a move would jeopardise US competitiveness in the global market. “It’s impossible to pursue global leadership if products can’t leave the United States.”

In addition, Smith indicated the challenges from the drastically “different tastes in technology” in China and the US.

When Microsoft introduced social chatbot XiaoIce – pronounced Shao-Ice – in the US in 2016 under the name “Tay”, pop singer Taylor Swift threatened to take legal action over the use of her name. The company was forced to shut down the chatbot, developed by Microsoft’s Chinese researchers and first released on the mainland in 2014, when it started posting offensive and racist tweets less than 24 hours since its launch, after being corrupted by internet trolls who interacted with it.

“Tay was but one example of differing cultural practices across the Pacific,” Smith wrote.