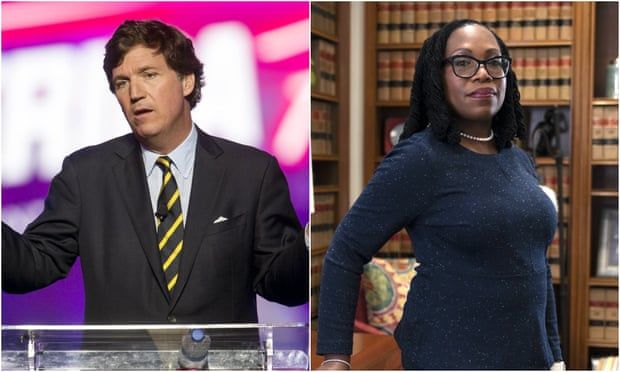 Joe Biden has nominated the first Black female justice on the supreme court, Carlson is questioning her LSAT scores
What does it mean to live in a democracy? Well, according to the Fox News host Tucker Carlson, it means having the right to harangue Black women and force them to show their papers.

On Wednesday Carlson went on a tirade about the District of Columbia circuit Judge Ketanji Brown Jackson, who Joe Biden has nominated to replace supreme courtJustice Stephen Breyer. Jackson’s confirmation, if it happens, would fulfil Biden’s campaign promise to nominate a Black female justice.

“So is Ketanji Brown Jackson – a name that even Joe Biden has trouble pronouncing – one of the top legal minds in the entire country?” Carlson asked. “[I]t might be time for Joe Biden to let us know what Ketanji Brown Jackson’s LSAT score was. How did she do on the LSATs? … It would seem like Americans in a democracy have a right to know.”

Before we get on to Jackson’s qualifications, perhaps we ought to have a word about Tucker Swanson McNear Carlson’s own credentials. If he thinks Ketanji Brown Jackson’s name is difficult to pronounce, perhaps he shouldn’t be a television presenter. Of course, Carlson has no problem saying Jackson’s name. He’s just being racist: which seems to be the only qualification one needs to get a gig on Fox News.

The LSATs are a multiple-choice exam that you have to take to get into most law schools in the US. Carlson must have only realized that it was written in the constitution that all Americans have a right to view a judge’s LSAT exams recently because there’s no record of him asking for the LSAT scores of recent supreme court nominees, such as Amy Coney Barrett and Brett Kavanaugh, to be released. I wonder why he’s so worked up about them this time?

While Jackson’s LSATs may not be public knowledge (her kindergarten report cards have also not been released to the American people), her qualifications are impeccable. She went to Harvard Law School; served as a supervising editor for the Harvard Law Review; clerked for three judges including Justice Breyer; spent 15 years as a public defender; eight years as a trial court judge in the US district court in DC; was vice-chair of the US Sentencing Commission; and has issued a number of notable rulings. But none of that’s good enough for Carlson. He will not rest until we see her LSATs, a flawed measure of student potential that helps candidates get into law school, but has zero to say about their ability after they graduate. Even if it turned out Jackson’s score was stellar, no doubt Tucker would want to her see her birth certificate as well. And maybe pull out the calipers and take some head measurements while he’s at it.

It doesn’t matter how hard you work or how many accomplishments you rack up, if you’re a minority there is always someone like Carlson ready to tell you that the only reason you’ve got to where you are is because of things like affirmative action or political correctness. I’ve certainly had my own Carlson moment. My first job out of university was a trainee solicitor at a corporate law firm. A white guy at my law school had a minor meltdown when he found out I’d got into the same firm he had been rejected by. “Probably a diversity hire!” he told me in a “jokey” tone of voice.

It is true, of course, that a significant number of unqualified people get into prestigious universities and top jobs thanks to affirmative action. But you know who benefits from affirmative action the most? Rich white people. Take Harvard, for example. A 2019 analysis of the Ivy League’s school admissions data found that only around 57% of white students were admitted to Harvard on merit. A whopping 43% of them were there because they were “ALDCs”: athletes, legacy students (their parents went to the school), on the dean’s list (their parents donated to the school) or the children of Harvard employees. By contrast, less than 16% of African American, Hispanic and Asian American admits were ALDCs.

If Carlson really is so keen on ensuring that the US is a meritocracy, then I suggest he worry less about making Jackson’s LSAT scores public and focus on rather different data instead. How exactly did Jared Kushner get into Harvard, for example? Did it have anything to do with the $2.5m his dad pledged to the school? How did Donald Trump get into the prestigious University of Pennsylvania’s Wharton School of Finance? Is it true his dad pulled a few strings? Americans in a democracy have a right to know.
#Donald Trump  #Joe Biden