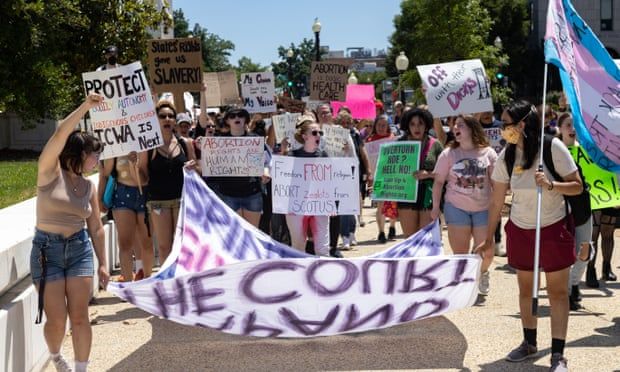 British Medical Association votes to lobby UK government on the issue after an emergency debate on the overturning of Roe v Wade.

Americans who cannot access abortions should be offered free services in the UK, British doctors have said.

In an emergency debate in response to the US supreme court’s decision to overturn the Roe v Wade ruling, the British Medical Association (BMA) agreed to lobby the UK government on the issue.

Proposing the motion on Wednesday Marina Politis, a medical student, said: “Abortion is essential healthcare … in [some] cases, the US supreme court decision is a death sentence.

“In other, less risky pregnancies, this decision still removes an essential right of the individual to choose what happens to their own body.

“In the context of a hostile environment, we have seen increased migrant charging. We also need to provide safe abortion care to all nationals seeking this in the UK, without subjecting them to overseas patient upfront tariffs – and this must be regardless of borders going far beyond the US.”

The motion passed with 57% of doctors voting in favour of the clause calling for the UK to offer free abortions to all nationalities, 36% against and 7% abstaining.

Of the 80,000 women who receive abortions from the British Pregnancy Advisory Service each year, 4,000 are international patients.

Women whose governments do not cover the costs will pay between £480 and £1,510 for the consultation and procedure, depending on the method and how many weeks pregnant they are, according to the Daily Telegraph.

Speaking after the BMA’s annual representative meeting, Politis said she was “proud to see our profession commit to global reproductive rights”.

“It is of the utmost importance that we stand in solidarity with the American Medical Association and our US colleagues,” she told the Guardian. “The passing of this motion emphasises that we do not support this dangerous erosion of reproductive rights, which is also an erosion of human rights.

“It is imperative that the passing of this motion is only the beginning and that this policy is now enacted.”

Members also agreed to publicly condemn the overturning of the Roe v Wade ruling and to support American doctors who provided abortions. They called on the UK government to “strengthen [its] own abortion provision”.

Dr Lisa Egbert, of the American Medical Association (AMA), said: “The AMA is thankful to the British Association for adding your voice recognising access to essential medical care as a fundamental human right.”