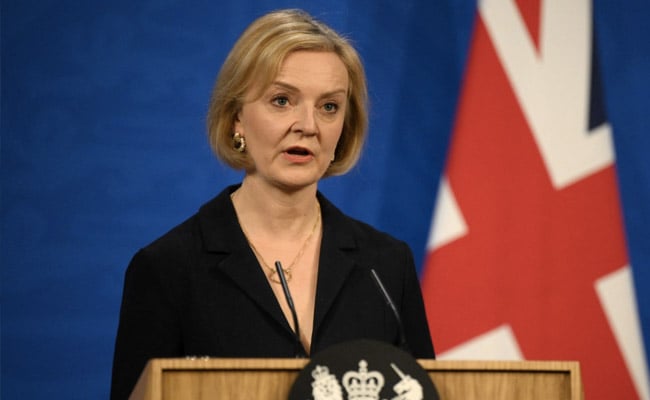 "I do want to accept responsibility and say sorry for the mistakes that have been made," Embattled UK Prime Minister Liz Truss said.

Embattled UK Prime Minister Liz Truss on Monday apologised for going "too far too fast" with reforms that triggered economic turmoil, but vowed to remain leader despite a series of humiliating climbdowns.

"I do want to accept responsibility and say sorry for the mistakes that have been made... we went too far and too fast," she told the BBC.

However, she said that she was "completely committed to delivering for this country" despite questions over who was now in control of government policy.

Her government on Monday axed almost all of its debt-fuelled tax cuts unveiled last month to avert fresh market chaos.

Hunt estimated the tax changes would raise about £32 billion ($36 billion) per year, after economists estimated the government faced a £60-billion black hole. He also warned of tough spending cuts.

The chancellor of the exchequer said no government could control markets -- but stressed his action would give certainty over public finances and help secure growth.

"The prime minister and I agreed yesterday to reverse almost all the tax measures announced in the growth plan three weeks ago," Hunt told parliament, flanked by a grim-faced Truss.

The chancellor also announced the formation of an economic advisory council, featuring four experts outside of government.

Hours earlier, he had used a brief televised statement to announce the dramatic reversals to nervous markets, conceding last month's budget from his predecessor had harmed the public purse.

Truss told the BBC that she still believed in a "high-growth, low-tax economy", but that economic stability was "my priority as prime minister".

Hunt scrapped plans to axe the lowest rate of income tax, and curbed the government's flagship energy price freeze -- pulling the plug in April instead of late 2024.

After April, his department will "review" its energy support package, he said.

A proposed reduction in shareholder dividend tax was also binned, along with planned tax-free shopping for tourists and a freeze on alcohol duty.

The announcement comes as Truss's governing Conservative party tanks in the opinion polls amid the reversals and Britain's worsening cost-of-living crisis.

Truss fired her close friend Kwarteng on Friday after their recent tax-slashing budget sent bond yields spiking and the pound collapsing to a record dollar-low on fears of rocketing UK debt -- fuelling intense speculation over her political future one month after taking office.

Hunt's action on Monday sent the British pound soaring against the dollar and euro, while bond yields dipped.

Tax reductions financed via borrowing were the centrepiece of last month's ill-fated budget.

Truss had already staged two embarrassing budget U-turns, scrapping tax cuts for the richest earners and on company profits, and is now facing calls to resign even from her own MPs.

"There will be more difficult decisions I am afraid, on both tax and spending, as we deliver our commitment to get debt falling as a share of the economy over the medium term," Hunt cautioned.

"All departments will need to redouble their efforts to find savings, and some areas of spending will need to be cut."

Hunt already stated that he was not taking anything off the table amid speculation of cutbacks on areas like defence, hospitals and schools.

He met over the weekend with the governor of the Bank of England, Andrew Bailey, and the head of the Debt Management Office for talks.

In the wake of the earlier turmoil, the BoE launched emergency buying of UK government bonds -- a policy that ended Friday.

The budget furore has reportedly sparked a plot to oust the prime minister.

"That sound you can hear is the death knell for Trussonomics, with the vast majority of her tax cutting plans now consigned to the bin," said Laura Suter, head of personal finance at stockbroker AJ Bell.

In two weeks' time, Hunt will unveil his medium-term fiscal plan alongside independent economic forecasts from the Office for Budget Responsibility.

But the main opposition Labour party, riding high in the polls, said the ruling Tories were responsible for "chaos and fiasco".

"This is a Tory crisis, made in Downing Street, but ordinary working people are paying the price," its finance spokeswoman Rachel Reeves told parliament.