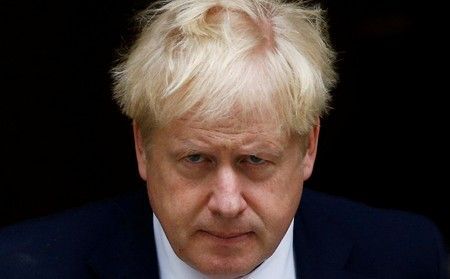 Prime Minister Boris Johnson told the European Union on Monday that the Brexit ball was in its court and that the bloc should now urgently discuss in detail his proposal for breaking the deadlock in talks ahead of Britain&#39;s departure on Oct. 31.

With just 24 days to go before the United Kingdom is due to leave the EU, both sides are positioning themselves to avoid blame for a delay or a disorderly no-deal Brexit.

EU leaders reacted coolly to Johnson's last-ditch proposals to bridge the impasse, indicating just how far apart the two sides are over the first departure of a sovereign state from the EU, which was forged from Europe's ruins after World War Two.

"What we're saying to our friends is (that) this is a very generous, fair and reasonable offer we've made. What we'd like to hear from you now is what your thoughts are," Johnson said.

"If you have issues with any of the proposals that we've come up with, then let's get into the detail and discuss them," he told reporters, reiterating his position that the United Kingdom would leave the EU on Oct. 31.

At stake, potentially, are the unity of the United Kingdom, peace on the island of Ireland, global growth and the future shape of the European project.

Johnson has repeatedly vowed that Britain will leave the bloc on Oct. 31 and that he would rather be "dead in a ditch" than seek any further extension of the departure date.

A law passed by his political opponents requires him to write to the EU requesting a delay if he has failed to agree a deal by Oct. 19, the day after an EU summit of all 28 national leaders in Brussels.

A Scottish court on Monday rejected a bid by campaigners seeking an order to force Johnson to ask for a Brexit delay, citing assurances given to the court by the government that it would comply with the law.


Johnson made his proposal to the EU last Wednesday, offering a possible compromise on the Irish border - the most contentious issue - that drew cool reception from the EU.

He went further than many had expected on trying to solve the dilemma over the border between British-ruled Northern Ireland and EU member Ireland by proposing an all-island regulatory zone to cover all goods. This would replace the so-called "backstop" arrangement he says Britain cannot accept.

However, Northern Ireland would leave the EU's customs area along with the rest of the UK and the province's institutions would be able to opt to exit the regulatory zone - a step too far for Ireland and the EU.

"That's a no-go," said a diplomat dealing with Brexit in Brussels. "Unless they move towards accepting a genuine backstop to cover all of Northern Ireland in all aspects and with no limitations, I see no chance for a deal."

"There will not be a deal compromising the single market, this is a foundation of the whole of the EU."

The backstop aims to avoid the imposition of any border checks on the island of Ireland after Brexit. Johnson argues that it would split Northern Ireland from the rest of the United Kingdom or else trap the whole UK in the EU's orbit for years.

Johnson outlined his latest proposals in a telephone call to French President Emmanuel Macron on Sunday, an Elysee official said. Macron said the EU would evaluate progress at the end of the week, a message reinforced by others in the bloc on Monday.

"The political reality is that we should know by the end of the week whether we are still in deal-making mode or not," said an EU official.

The EU must match the compromises made by Britain to secure a Brexit deal, Johnson's spokesman said on Monday.

"We are ready to talk to the EU at pace to secure a deal so that we can move on and build a new partnership between the UK and the EU, but if this is to be possible, the EU must match the compromises that the UK has made," the spokesman said.

But the EU has multiple issues with the London proposal.

They zero in on the Northern Irish authorities' role; the envisaged arrangements for customs, VAT and excise tax; just competition clauses; as well as a general commitment proposed by Britain that neither side would ever introduce border checks on the sensitive Irish frontier.

The EU says that risks tying its hands while at the same time not providing any workable solution to keep the border open.