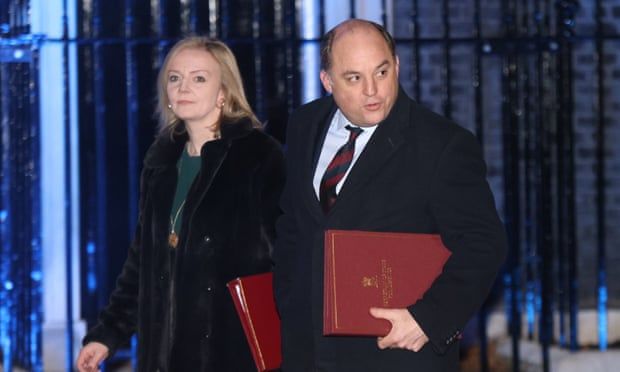 The UK has said it will work “all day” to persuade fellow European states to cut Russia off from the international Swift payment system.

The UK defence secretary, Ben Wallace, ended the pretence that Britain was not at odds with its fellow European leaders over the issue. He said there was still time for Russia to be excluded, and the foreign secretary, Liz Truss, said: “The UK is working with allies to exclude Russia from the Swift financial system.”

Wallace added: “We will work all the magic, do everything we can in diplomacy.”

Truss is to undertake a round of shuttle diplomacy to try to rally support for the British position after the EU refused to adopt what has been billed as the “nuclear option” of sanctions.

British officials said that the EU, reflecting the divisions at its council meeting on Thursday, kept the Swift option on the table. UK diplomats are arguing that with Ukrainian forces mounting a defence of their country, and scattered signs of unease in Russian cities, this is the moment to try to get ahead of Putin for once and surprise him with a move that would send the Russian economy straight into the deep freeze.

The British position has the support of Canada and some US senators. British officials insist they will keep up the pressure for the policy even if Kyiv falls.

Boris Johnson lobbied the German chancellor, Olaf Scholz, on Wednesday on the issue but made no progress. Johnson’s position, also raised at a virtual meeting of the G7, is backed by the Labour leader, Keir Starmer.

The Swift payment system (the Society for Worldwide Interbank Financial Telecommunication) is the main secure messaging system that banks use to make rapid and secure cross-border payments, allowing international trade to flow smoothly. It has become the principal mechanism for financing international trade. In 2020, about 38m transactions were sent each day over the Swift platform, facilitating trillions of dollars’ worth of deals.

Swift is incorporated under Belgian law and, although supervised by a complex web of central banks, it was forced in 2012 to comply with an EU regulation, as confirmed by its home country government, that had cut Iran off from the banking system.

Wallace said: “We would like to go further. We’d like to do the Swift system – that is the financial system that allows the Russians to move money around the world to receive payments for its gas – but … these are international organisations and if not every country wants them to be thrown out of the Swift system, it becomes difficult.”

Opponents of the move argue that it would incentivise Russia to try to use an alternative fledgling scheme. They also say it would be dangerous for countries highly dependent on Russia for their energy, principally Italy.

The Biden administration privately supports the Swift cutoff, but is also focused on maintaining transatlantic unity. Biden highlighted the other swingeing sanctions that the EU had agreed to take, arguing that they were more effective than Swift. He said: “It is always an option, but right now that’s not the position the rest of Europe wishes to take.”

Scholz said before an EU meeting to decide on sanctions late on Thursday night that it was important for the EU to hold measures in reserve to punish Russia further. “It’s very important that we decide on measures that have been prepared in recent weeks and reserve everything else for a situation where it is necessary to do other things as well,” he said.

The former European Council president Donald Tusk said on Friday that some EU governments had “disgraced themselves” by refusing to impose the toughest possible sanctions on Russia even as Vladimir Putin was bombing Kyiv.

The remarkable rebuke by Tusk, who led meetings of the council as president from 2014 to 2019, revealed deep divisions among Europe’s political elite at what is perhaps the continent’s most acute moment of crisis since the second world war.

“In this war everything is real: Putin’s madness and cruelty, Ukrainian victims, bombs falling on Kyiv,” Tusk posted on Twitter. “Only your sanctions are pretended [sic]. Those EU governments which blocked tough decisions (i.a. Germany, Hungary, Italy) have disgraced themselves.”