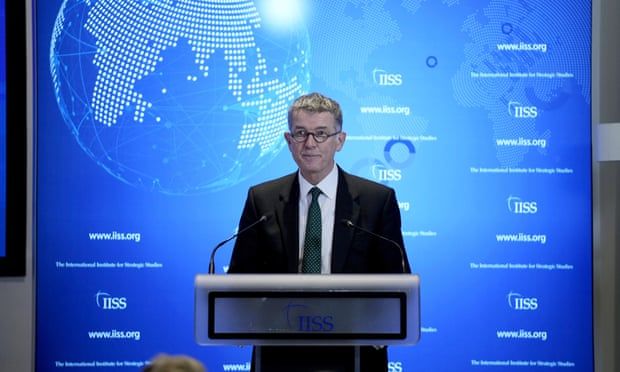 Island’s status and surveillance technology making China ‘single greatest priority’ for MI6
China is at risk of “miscalculating through over-confidence” over Taiwan, said the MI6 head, Richard Moore, in a statement clearly intended to warn Beijing to back off any attempt to seize control of the island.

Giving a rare speech, Britain’s foreign intelligence chief said in London that China was at risk of “believing its own propaganda” and that the country had become “the single greatest priority” for MI6 for the first time in its history.

Moore did not mention Taiwan explicitly, but the status of the country, whose independence is not recognised by Beijing, remains the most acute issue of tension between China and the west.

Moore, at the event, organised by the International Institute for Strategic Studies, said: “The Chinese Communist party leadership increasingly favour bold and decisive action on national security grounds. The days of Deng Xiaoping’s ‘hide your strength, bide your time’ are over.

“Beijing believes its own propaganda about western frailties and underestimates Washington’s resolve. The risk of Chinese miscalculation through over-confidence is real.”

The UK remains keen to cooperate with China across a range of issues, including climate change and on trade and investment, and generally avoids remarks critical of Beijing. But Moore’s remarks are some of the most pointed comments made by a British intelligence chief or other senior security official about China.

The MI6 chief also warned about the spread of Chinese surveillance technology, which he said was used in “targeting the Uyghur population in Xinjiang” and said the UK needed to recognise that “technologies of control are being increasingly exported to other governments”.

Moore concluded that “adapting to a world affected by the rise of China” was “the single biggest priority for MI6”. It is understood that China now forms the largest part of the agency’s work for the first time, greater than its traditional but still substantial focus on Russia and Islamist terrorism.

A particular point of concern, Moore said earlier in an interview with the BBC, was China’s use of “debt traps and data traps” to get smaller countries “through its economic policies to try to sometimes … get people on the hook”.

Trying to define the data trap, Moore said: “If you allow another country to gain access to really critical data about your society, over time that will erode your sovereignty, you no longer have control over that data.”

MI6 has been concerned for some time about China’s interest in acquiring large datasets, including personal and medical information, whether through hacking or by reaching a commercial agreement with a smaller country that allows it to take control of data and send it to its home market.

Worries similar to those about a debt trap have been expressed about Beijing’s Belt and Road economic development initiative, in which Chinese development projects in Africa and elsewhere are funded by its own banks.

This week, it emerged that Uganda was at risk of losing control of Entebbe international airport to China after struggling to payback a $200m loan as intended.

Russia, added Moore, remained an “acute threat”, its foreign interference being on an “upward trend”. He reinforced remarks made by British ministers in support of Ukraine.

Western spy agencies are particularly concerned about the buildup of Russian troops on Ukraine’s eastern border, and the possibility that Russia will support destabilisation operations in the country. At the end of last week, Ukraine’s president, Volodymyr Zelenskiy, said his intelligence agents had uncovered a pro-Russian coup plot.

Moore said MI6 would have to become “more open to stay secret” and work more closely with tech companies to counter threats posed by China and Russia, which sought to gain advantage by mastering artificial intelligence and other emerging technologies.