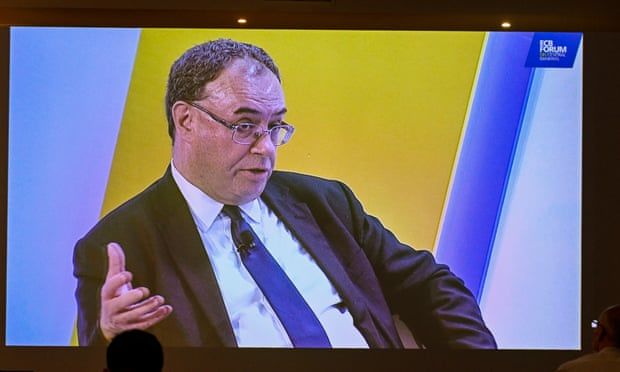 Andrew Bailey said inflation would persist for longer than previously expected as petrol prices soar
Britons should expect to suffer a more severe bout of inflation than other major economies during the current energy crisis, the governor of the Bank of England has warned.

Speaking at a conference of central bankers in Portugal, Andrew Bailey said inflation was higher in the UK and would persist for longer than previously expected as soaring petrol and gas prices sent household bills rocketing to new highs.

Bailey said he was determined to bring down inflation and was prepared to use the Bank’s power to increase interest rates aggressively in response, though he added that it may not be necessary if price growth slowed towards the end of the year.

“I think the UK economy is probably weakening rather earlier and somewhat more than others,” he said. “There will be circumstances in which we will have to do more. We’re not there yet in terms of the next meeting. We’re still a month away, but that’s on the table. But you shouldn’t assume its the only thing on the table – that’s the key point,” he added.

His comments came as leaders of the world’s most powerful central banks warned that the global economy is facing a new period of persistently high inflation, unleashed by the coronavirus pandemic after decades of stability.

The heads of the US Federal Reserve and European Central Bank joined Bailey in saying that the era of low and stable inflation across advanced economies since the 1990s was unlikely to return in the wake of a succession of economic shocks.

Christine Lagarde, the head of the ECB, said there were “forces that have been unleashed” by the Covid pandemic, Russia’s war in Ukraine and the breakdown of global supply chains that made the return to a world of low and stable inflation difficult to achieve.

“I don’t think that we’re going to go back to that environment of low inflation,” she said.

Speaking on a panel at the ECB’s annual policy forum in Sintra, Portugal, she said: “A lot of the movements we’ve experienced in the last 20 years were predicated on globalisation – on the breaking-down of supply chains, on the reduction of cost, on just-in-time. That has changed. And will probably change continuously towards a system we’re not certain about.”

Lagarde was joined on the panel by Bailey, the chair of the US Fed, Jerome Powell and Agustín Carstens, the head of the Bank for International Settlements.

Powell said the post-pandemic economy was being driven by “very different forces” from the past decade. “What we don’t know is whether we’ll be going back to something that looks more like, or a little bit like, what we had before. We suspect it will be kind of a blend.”

The Fed chair said it was raising interest rates with the express purpose of moderating the pace of growth in the world’s largest economy, as it attempts to deal with the fallout from severe supply bottlenecks and red-hot demand for goods and services driving up inflation.

“The aim of that is to slow growth down so that supply will have a chance to catch up. We hope that growth will remain positive,” he said.

Bailey said Covid had left a “structural legacy” in the UK jobs market, where companies have struggled with a lack of workers, while inflation would also be influenced by the remaking of international supply chains in response to geopolitical tensions and to deal with global heating.

Together representing more than a third of the world economy, and with more than $20tn (£16.5tn) of assets on their balance sheets, the central bank chiefs put borrowers on notice for aggressive rises in interest rates to combat soaring inflation.

Powell said it was the job of central banks to prevent a permanent transition to a “higher-inflation regime” after a string of shocks. “There’s a clock running here,” he said.

While warning that there were signs of slowing economic growth in Britain, Bailey did not rule out raising rates by 50 basis points at the Bank’s next meeting in August and said it had the option of taking forceful action. “

Giving evidence separately to the Commons Treasury committee, the economist Swati Dhingra, who joins the Bank’s nine-strong monetary policy committee (MPC) later this year, said the worsening outlook for growth had convinced her that a “gradual approach” to interest rates rises was needed.

At a hearing with MPs on the Treasury select committee to approve her appointment, the London School of Economics economist said she had been prepared to take a more aggressive approach to rate hikes until she saw the latest consumer confidence figures, which showed the largest decline in optimism on record.

“In hindsight, I think there is some room for a gradual approach,” she said. Three members of the MPC voted for a 0.5-percentage point rate rise in the central bank’s base rate to 1.5% at a meeting earlier this month, while the majority backed a more modest 0.25-point increase.
#Coronavirus  #Covid