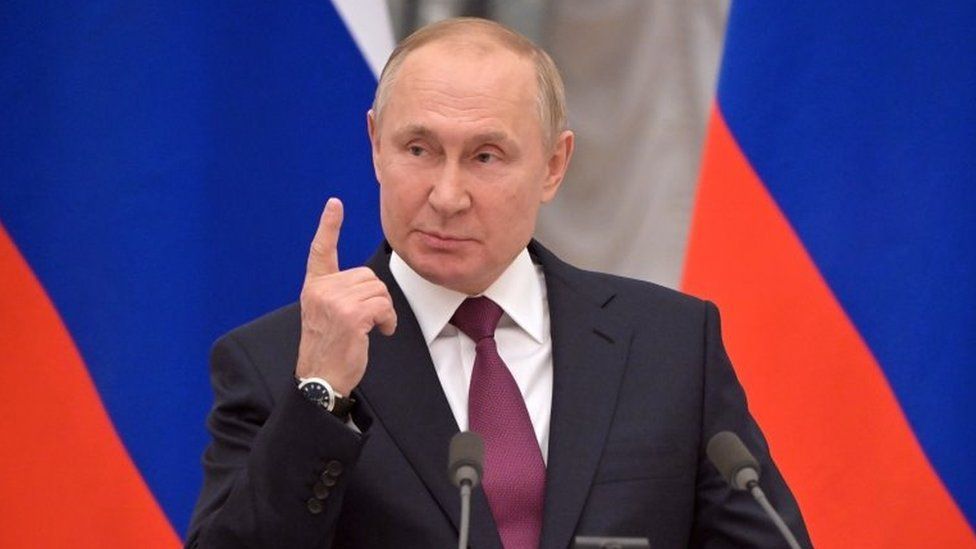 According to the UK's sanctions list they will face asset freezes - a measure also being imposed by the EU and the US - but not a travel ban.

The announcement comes a day after Russia invaded Ukraine, with tanks since entering the capital Kyiv.

Russia's invasion of Ukraine has provoked condemnation from countries in the West and retaliatory sanctions.

Speaking to leaders of the Nato military alliance in a virtual meeting, Mr Johnson said a "catastrophe was engulfing Ukraine" and Mr Putin was engaging in a mission to "overturn the post-Cold War order".

The prime minister warned allies the Russian president's ambitions might not stop at Ukraine, adding it was "vital" Nato was strengthened now in response to what was a "Euro-Atlantic crisis with global consequences".

Mr Johnson said the UK stood ready for any request from Nato to go further with military support.

On Friday evening, in a video posted on social media, he addressed the people of Russia directly, saying in Russian: "I do not believe this war is in your name."

He also spoke Ukrainian after urging an end to the conflict, saying "the world needs a free and sovereign Ukraine".

It is unclear how significant Mr Putin and Mr Lavrov's assets in the US, EU and UK are and what practical impact the sanctions will have on them.

EU foreign policy chief Josep Borrell said the pair joined Belarus President Alexander Lukashenko and Syrian President Bashar al-Assad in being the only world leaders to be sanctioned by the EU.

The US is also imposing a travel ban on Mr Putin and Mr Lavrov - a move the UK and EU have not adopted for now.

However, the allies stopped short of removing Russia from the international banking system Swift - something Ukrainian President Volodymyr Zelensky has called for.

On Friday, Mr Johnson reiterated his plea for world leaders to take "immediate action" on removing Russia from Swift to "inflict maximum pain on President Putin and his regime".

Some of the most stringent sanctions announced this week by Western nations include:

*  limiting access to technology for energy, military and other high-tech equipment

*  A hold on the Nord Stream 2 gas pipeline to Germany

The announcement that Mr Putin and Mr Lavrov will be targeted comes after the UK announced a package of strengthened sanctions against Russia on Thursday.

Russian banks, businesses and oligarchs were targeted in the measures.

The national airline Aeroflot was also banned from landing at UK airports or flying through its airspace - with Transport Secretary Grant Shapps announcing on Friday night that the same measure would apply to all Russian private jets.

The symbolism of freezing the UK assets of President Putin himself and those of his foreign minister couldn't be plainer.

As with the EU though, which has announced the same, questions are likely to be asked about how many assets either man personally has in the UK.

The move that is believed could have a significant impact would be removing Russian banks from the international Swift system, which facilitates money transfers.

The prime minister is pushing for that but it can't be done by the UK alone, so diplomatic efforts to persuade other allies continue. 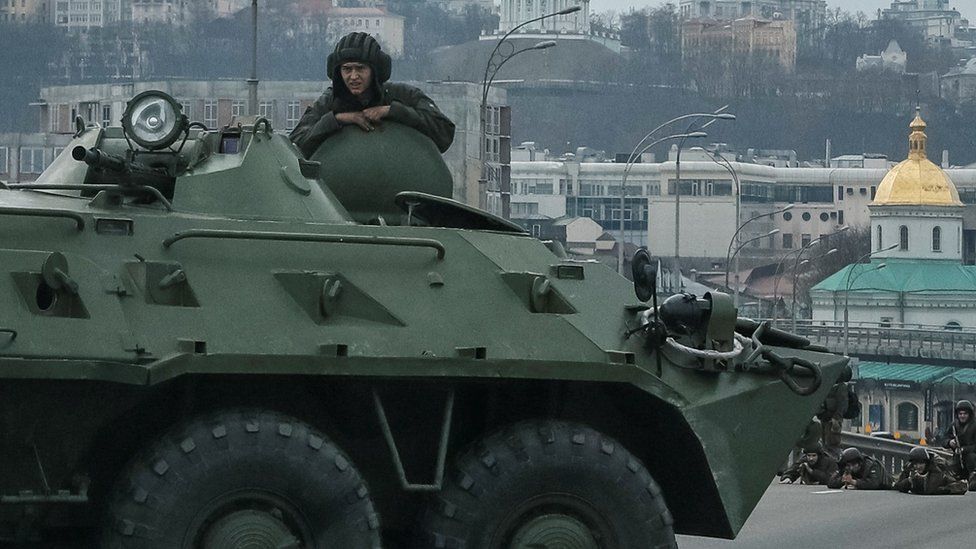 Russia has been continuing its assault from the north, south and east, but Ukrainian resistance has been inflicting casualties on Russian forces.

Sources suggest the brutality of Russian forces is being ramped up in the face of this resistance - an assessment experts delivered at a meeting of the UK's cabinet ministers on Thursday night.

Earlier, the Belarussian ambassador to the UK, Maxim Yermalovich, was summoned to the Foreign Office over his country's role in the invasion.

The UK has already said sanctions will be applied to Belarus, a long-term ally of Russia.

Mr Zelensky said Ukraine "needs the support of partners more than ever" and called for stronger sanctions.

Nato - the North Atlantic Treaty Organisation - is a military alliance originally formed in 1949 by 12 countries, including the US, Canada, the UK and France.

Members agree to come to one another's aid in the event of an armed attack against any member state. Ukraine is not in Nato but wants to join the alliance.

Russia had sought assurances this would never be allowed to happen.