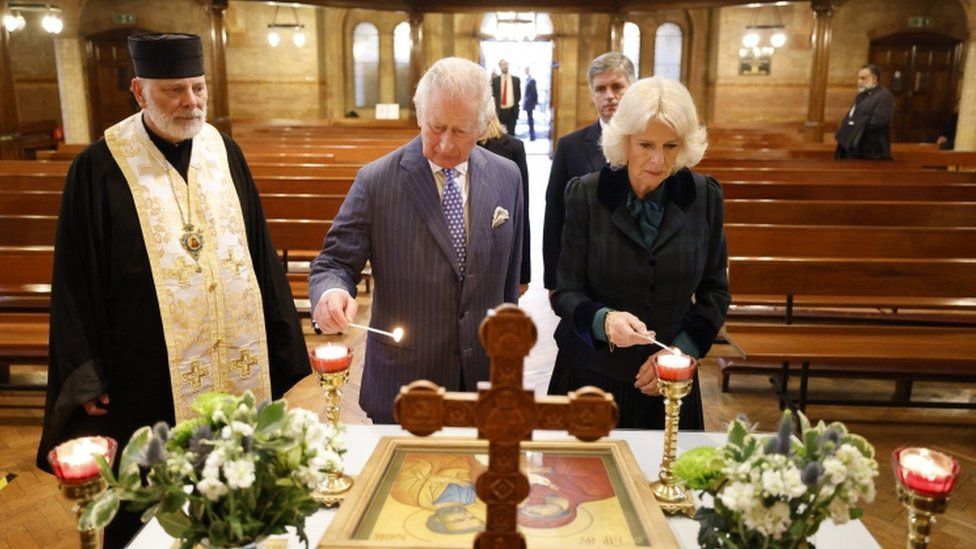 Prince Charles said he has been deeply moved by the bravery of Ukrainians faced with "terrible aggression" from Russia.

He was speaking on a visit to the Ukrainian Catholic Cathedral in London on Ash Wednesday.

Ukrainians had been to the cathedral to ask for blessings before going to join the fight against Russia, staff said.

Russia has been attacking key cities as its invasion intensified on Wednesday.

The prince told how he and his wife Camilla had been moved by all they had heard on their visit and "above all by the extraordinary bravery, generosity and fortitude of the Ukrainian community in the face of such truly terrible aggression."

The Duke and Duchess of Cornwall were joined by representatives from humanitarian organisations he is connected with as well as the Ukrainian ambassador Vadym Prystaiko, and his wife Inna.

Mr Prystaiko earlier received a standing ovation from MPs in the Commons when he watched Prime Minister's Questions.

Prince Charles's visit came after he earlier described Russia's invasion of Ukraine as a "brutal aggression".

On Tuesday he visited Southend-on-Sea on Tuesday to celebrate its new city status, an honour given by the Queen following the killing of its MP Sir David Amess.

He compared the conflict in Ukraine to what happened to Sir David, saying the MP had stood for democracy and freedom.

"We are seeing those same values under attack today in Ukraine in the most unconscionable way", he said.

Prince Charles has been unusually blunt and outspoken in his attacks on the invasion of Ukraine.

He made an impromptu speech in a visit to the Ukrainian Catholic Cathedral in London, condemning the "truly terrible aggression".

It follows another speech on Tuesday where he strayed beyond any diplomatic soft-soaping, warning directly of the "brutal" attack on freedom and democracy in Ukraine.

The visit to the cathedral was another show of support for the Ukrainian community and Prince Charles said he was "deeply moved".

Prince Charles and Camilla spoke to the BBC journalist Olga Malchevska who had been reporting live on the war when she had seen the bomb damage to her own family home in Kyiv.

He asked if she was able to keep in touch with her family and, with a choir singing, the prince seemed to recommend the power of prayer.

Other members of the Royal Family have also expressed their solidarity with those affected by the conflict including Prince William and Kate Middleton who have also said they stand with Ukraine.

Russian forces are continuing to bomb city centres and closing in on Ukraine's capital, Kyiv.

The United Nations has said since Russia launched its invasion last Thursday, more than 800,000 people have now fled Ukraine to neighbouring countries.