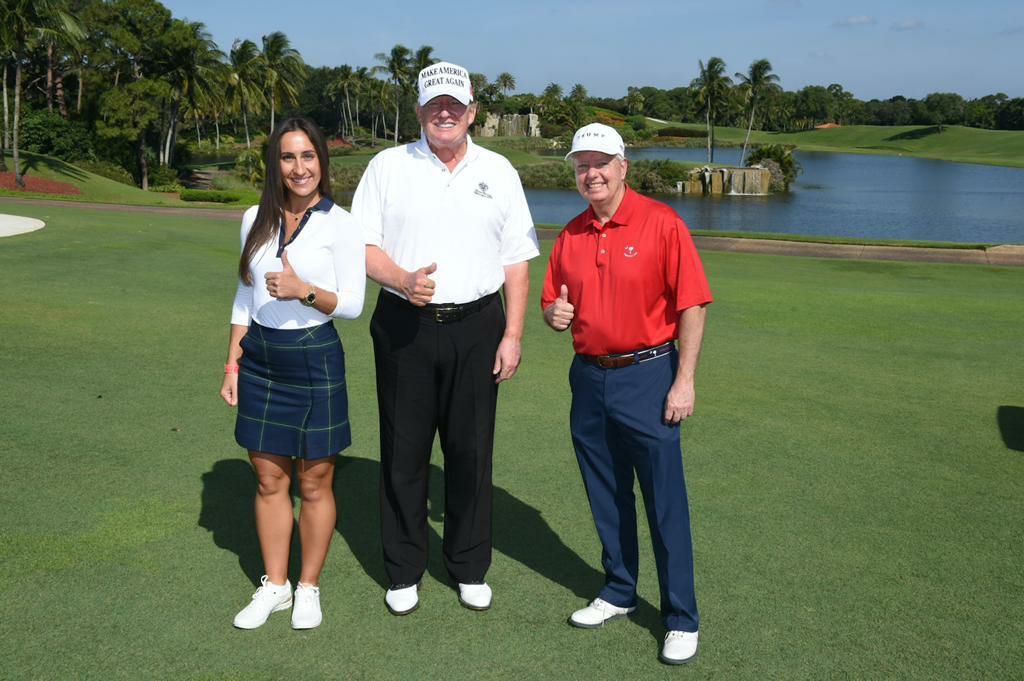 A Ukrainian woman who posed as a member of the Rothschild banking family is under federal investigation after she infiltrated Mar-a-Lago multiple times and mingled with former President Donald Trump, a report says.
Ukrainian-born Inna Yashchyshyn used the name of Anna de Rothschild and claimed numerous business ventures as she rubbed shoulders with high-profile Trump guests, per a joint investigation by the Pittsburgh Post-Gazette and the Organized Crime and Corruption Reporting Project (OCCRP).

Both the FBI's Miami office and a Canadian police force are looking into Yashchyshyn's business dealings, the investigation reported. The FBI did not immediately respond to Insider's request for confirmation, made out-of-hours, of the reported probe.

On several occasions in 2021 and 2022, Yashchyshyn mixed with Trumpworld heavyweights such as Sen. Lindsey Graham, Kimberley Guilfoyle, former Missouri Gov. Eric Greitens, and Trump donor Richard Kofoed, the outlets reported. She was also photographed with Trump on his golf course, they reported.

The report comes amid intense scrutiny of Mar-a-Lago's security following the August 8 FBI raid on the resort, which retrieved numerous boxes of classified information that investigators say were improperly retained and stored by the former president.

A partially-redacted version of the affidavit supporting the search warrant was released on Friday, revealing that 25 of the 184 recovered documents were marked top secret; 92 were marked secret, and 67 were marked confidential.

Security experts have long raised concerns about the potential to infiltrate the resort, which the former president used as a private club and a site for presidential business.

One unnamed former US intelligence agent called it a "nightmarish environment" for classified information, Reuters reported.

That environment has been tested — and found wanting — several times, including due to lapses by Trump himself.

In 2017, as he hosted the then-Japanese Prime Minister Shinzo Abe, Trump surprised security officials by casually discussing emerging news of a North Korean missile test at the dinner table in front of guests.

And Yashchyshyn is the second foreign national accused of infiltrating the club under a false name. In 2021, Chinese-born Yujing Zhang was convicted of trespassing after a 2019 incident in which she gained access to Mar-a-Lago with a thumb drive containing malware.

Following that incident, Trump's security detail had to clarify that while it could physically screen visitors, they had no say about who could visit.

It's unclear precisely what Yashchyshyn is being investigated with, the OCCRP/Pittsburgh Post-Gazette report said. In separate court documents seen by the outlets, she said she had been coerced into scam activities by a man she was in a relationship with.

Three unnamed people told the outlets that the FBI had interviewed them about Yashchyshyn, which included questions about a charity she formerly ran called United Hearts of Mercy, which has been accused of being a front for organized crime.

In her pose as a member of the super-rich, Yashchyshyn flashed a Rolex and a Mercedes-Benz during her visits to the Florida private club and talked freely about a lavish upbringing, the report said.

John LeFevre, a former investment banker, told the outlets: "It wasn't just dropping the family name. She talked about vineyards and family estates and growing up in Monaco."
#Donald Trump  #Mercedes