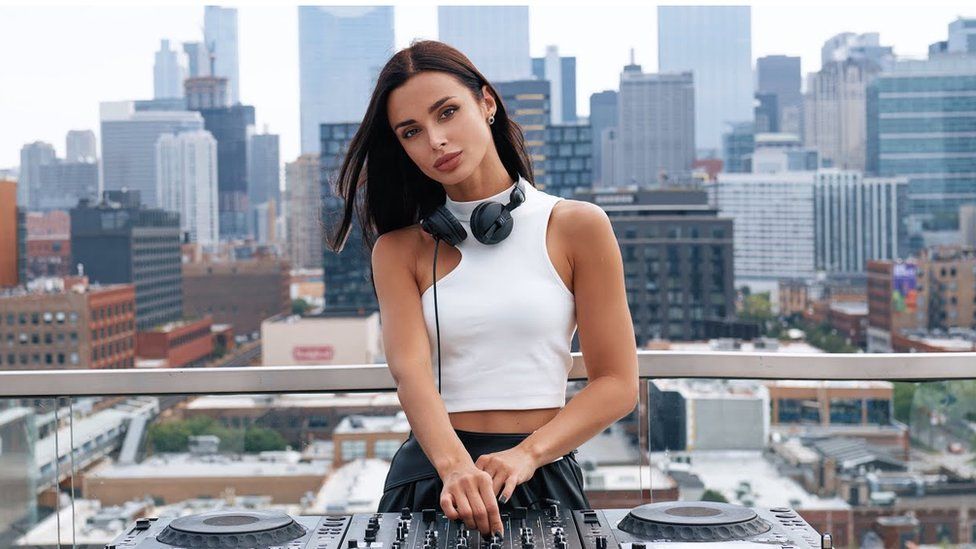 Last weekend, Olga Korolova fled her home in Chernihiv, Ukraine, with her daughter, her dog and whatever possessions she could cram into two bags.

"I was driving like a crazy," she says. "I saw a bomb and in my brain, all I could think was, 'Get away because of the baby'."

She drove for hours, eventually crossing the border into Poland where, that same night, she had a gig booked.

One of Ukraine's top techno DJs, Korolova threw out her setlist and played music exclusively by fellow Ukrainian artists.

"I was crying on the stage," she tells BBC News. "I was playing and I was crying. It was the hardest set of my life, but I knew for sure I needed to do something."

Korolova donated her fee to the Ukrainian army and charities helping people displaced by the conflict. The following night, she hosted a separate fundraiser on her YouTube channel. Her Instagram page, once home to glamorous travel photos and shots of nightclubs, now shares updates from Ukraine and footage of the Russian invasion.

Her aim is to show fans - especially Russian fans - the extent of the destruction.

"I'm in shock that Russian people are not seeing the truth," she says. "It's like they are in North Korea, without information. My fans from Russia, they send me messages saying, 'It's not true. It's a lie. All of your posts are a lie.' They don't want to see it."

Korolova is not alone. Faced with war, Ukraine's vibrant and flourishing music scene has become a sort of unofficial news outlet, documenting the conflict for an audience that might not be tuned in to traditional news channels. 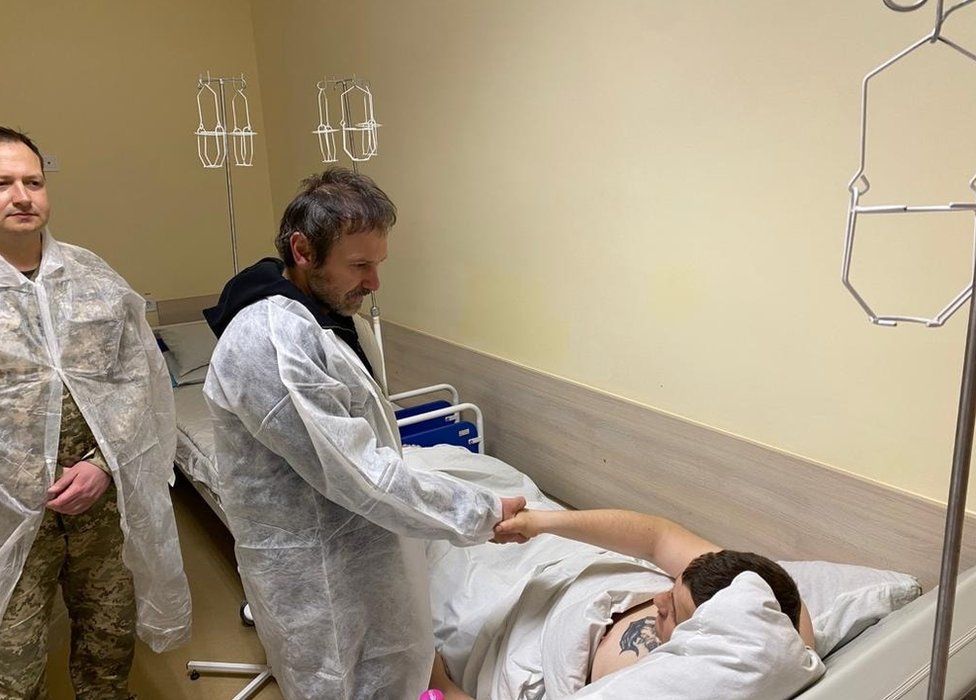 "We are spreading information about events in cities, trying to reach out to Russians to go to rallies, telling them that this is Russia's war of aggression against Ukraine."

Across YouTube, hundreds of Ukrainian artists have replaced the thumbnail image on their videos with a picture of the country's flag, superimposed with the words: "While you are watching this video, Ukrainian people are dying from Russian attack. Stop it."

On Facebook, Svyatoslav Vakarchuk, frontman of the Ukrainian rock band Okean Elzy, is posting hourly updates about the conflict. In one video, he's visiting wounded soldiers in hospital; in another he's in a bullet-proof vest, making a speech on the streets of Kharkiv; in another, he's delivering food and fuel to Kyiv in his car.

"I'm a well-known this person in this part of the world and I'm trying to use this [position] and do whatever I can," he says.

'Appeal to their instincts'

Slava's soft-spoken humility underplays his role in Ukraine's public life. A former politician who renounced his seat in 2008 in protest at Ukraine's corrupt political culture, he later played a key role in the Maidan Revolution that culminated in the ousting of President Viktor Yanukovych.

With Okean Elzy, he is arguably the country's most beloved singer - the equivalent of Bruce Springsteen or Paul McCartney in the West - and drew Ukraine's biggest-ever concert audience in 2014. Crucially, he is just as popular in Russia.

He says he's using all of his cultural capital to change people's minds about the current conflict.

"It's already too late to send just messages to fans," he says. "Now, I'm mostly talking to people like the mothers of [Russian] soldiers - and I explain to them that if they don't stop the children from going into war, they will get these children back in packages. We need to appeal to their instincts."

While DJ Korolova says Russian listeners have been resistant to such messages; Eugene Abdukhanov of the metalcore band Jinjer has had a different response.

"I received some texts from our Russian fans, apologising and saying they're definitely against this," he says from the south-eastern district of Kyiv.

"I didn't receive any angry texts from the Russian side, trying to justify this. Even though some people have this militaristic position, they're ashamed enough not to mention this to me." 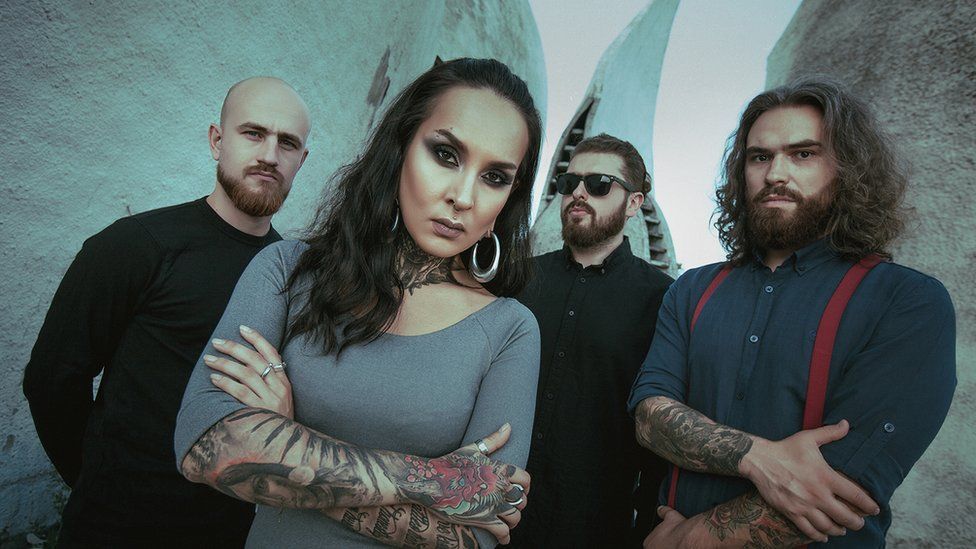 Rock band Jinjer were due to tour the US in March, but have now put all music on hold

Like many musicians, Abdukhanov has abandoned his day job to concentrate on the immediate humanitarian crisis. He is currently establishing a charity "to help the military, to help the civilians" and will soon join his friends in running a shelter providing "food supplies, water [and] protection" for people displaced by the conflict.

To the west in Lviv, Khrystyna Soloviy is also working with refugees.

"Lviv is overrun [so] I go to the refugee centre and give them psychological support. Many people are stunned and can't say which city they came from, or when they last ate.

"I hardly sleep and I have no appetite, but I feel safe."

It hardly needs to be said, but this is not what Ukraine's top musicians were expecting from their career.

The country has a thriving, diverse music scene that brings a home-grown flavour to hip-hop, punk, EDM, pop and psychedelic rock.

Although it has produced few international stars, the music is particularly palatable to those of us raised on Western rock - partly because the Ukrainian language is hypnotically melodic, featuring more soft consonants than other Slavic languages.

The country's folk tradition, which incorporates ritual lamentations and lyrical love songs, is equally rich and emotional; and that passion persists with the current generation of musicians.

"Ukrainians create a lot of music in different genres," says Dartsya Tarkovska of Music Export Ukraine. "One of their memorable and interesting approaches is to use folk motifs and ethno elements in their songs. So that's a very distinguishing feature."

So you have bands like Onuka, whose electro-folk ballads evoke the music of Bjork and FourTet; or DakhaBrakha, who spin traditional melodies into a blur of unexpected musical styles from around the globe.

A scene born in conflict

Ironically, it was Russia's annexation of Crimea in 2014 that accelerated the country's music scene, says Kostiantyn Pochtar, who found fame with rock group 5 Vymir, and now performs solo as Postman.

"Artists from Europe and America refused to come here because they were afraid of war," he explains. "So we, as young bands, had an opportunity to step in and play in these enormous great halls.

"This is how we started - but we all kept in mind that the war may start again tomorrow, because we knew that Russia wouldn't stop in Crimea.

"We just thought 'OK, if the end is going to be tomorrow, we need to have fun.' So this is how we rolled all those years, and it resulted in a really, really vibrant musical scene." 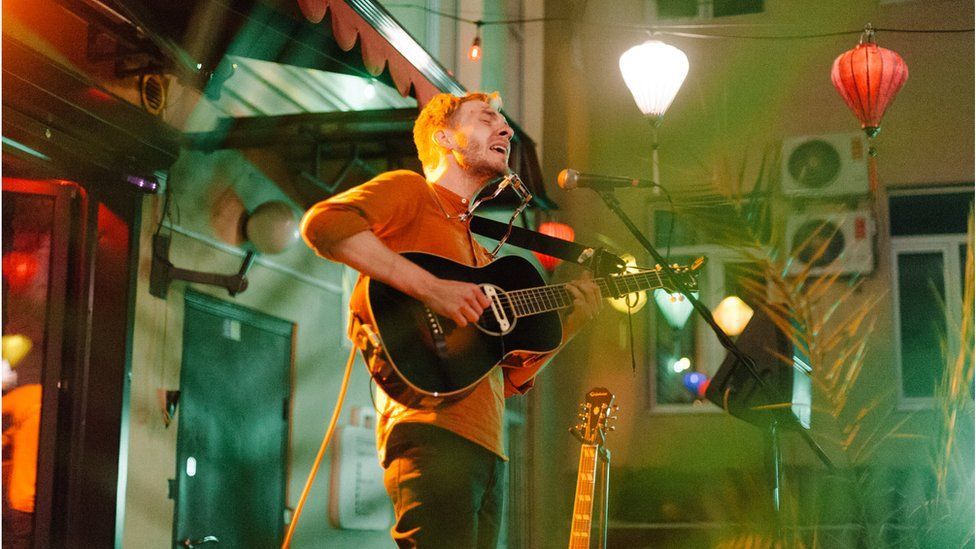 Pochtar was in Poland when Russia invaded last week, but one of his songs, Streets Of Kyiv, has become a source of comfort for the people living in shelters and underground bunkers in the Ukrainian capital.

"It makes me very emotional because it's a very delicate song," he says. "It's about a gentle type of love for a city that maybe is not able to love you back.

"When people in a shelter tell me they are under attack for three days and listening to that song, I am always touched."

He pauses, as his emotions get the better of him. "I'm not sure if I can say more about this, sorry."

Singer-songwriter Khrystyna Soloviy has had a similar experience. Last week, just hours before Russian troops crossed the border into Ukraine, she released a demo song that's become a rallying cry for the Ukrainian resistance.

"I dream about going to our seaside in Crimea," she sings over crashing piano chords, "but damn executioners are taking over our homes / So get ready for a fight."

"In those last hours of peace, I felt anxiety and tremors," she says by email from Lviv in West Ukraine.

"The mood of the song is dictated by life in Ukraine with the permanent war against Russia [for the] last eight years. This song is addressed to young people who decide to take up arms to defend our freedom.

"Yesterday one of our soldiers asked [me] to send the audio separately, because the Internet is not everywhere. I hope to be able to record a studio version soon."

But for most artists, making music is no longer their main concern.

"I just don't have a passion to play right now," says DJ Korolova, whose home has been destroyed, and whose husband remains in Chernihiv.

"The war definitely overturned [my] values," agrees Jinjer's Eugene Abdukhanov. "I'm not thinking about my job, my business, my band, popularity, anything like that. I am only thinking about my family because they are outside of Ukraine. They really need me, and I cannot be with them."

In Poland, Kostiantyn Pochtar is taking a different approach - organising an impromptu tour to raise money for victims of the conflict.

His booker, Bartek, came up with the idea on Saturday, asking fans on Facebook if they'd like to host a gig - whether in a venue, a school, a church hall or even their living room. Within an hour, he had 60 offers. Pochtar played the first date on Sunday.

"At first, when the invasion happened, I was disgusted, a little bit, to pick up a guitar and play," he says. "But now, I have to do it.

"I'm not sure if I could go back to Kyiv and pick up a gun and start shooting - but I am going to take my guitar and use it as a weapon." 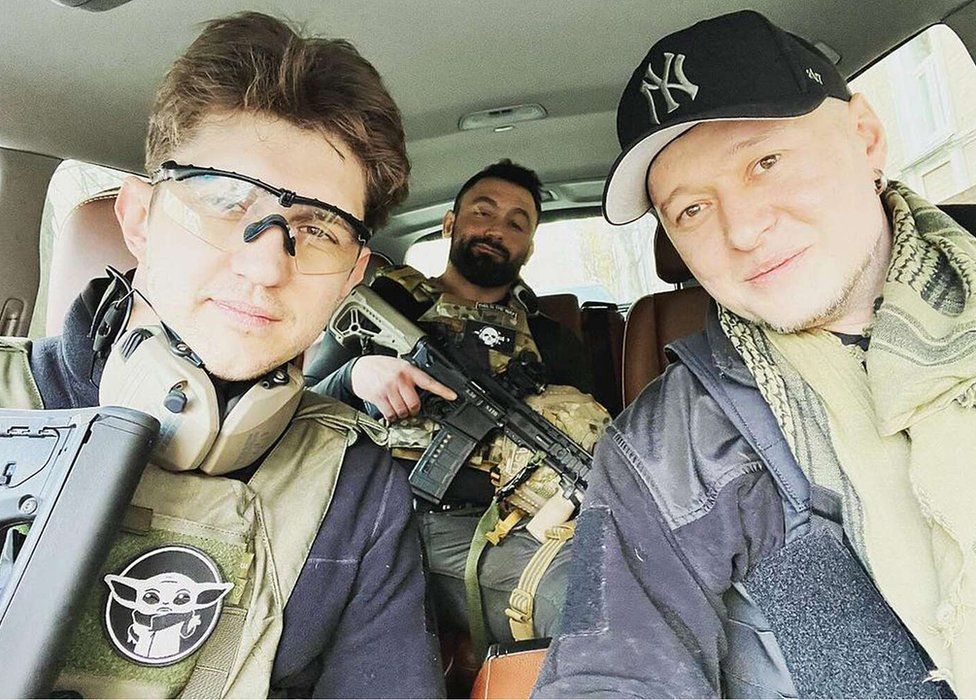 Boombox singer Andriy Khlyvnyuk (right) said he was willing to take up arms to resist the Russian invasion.

Many other Ukrainian musicians are having to consider whether they, too, would take up arms.

"I'll take my kids to a safe house and then I'll return to follow the instructions of the government," Andriy Khlyvnyuk of pop-rock band Boombox recently told Euronews,

"Musicians are peacemakers [but] now it's not time for playing guitars. It's time to take the rifles."

"If it comes to this, there is no other way," agrees Abdukhanov.

Musicians or not, Slava says the country's resolve is unshakeable.

"Everybody, including many Western analysts, was sure it was going to take Russia two days to overcome Ukraine. It's already sixth day and we are holding and we are resisting and we will win.

"Russian soldiers only have orders, but we have motivation."