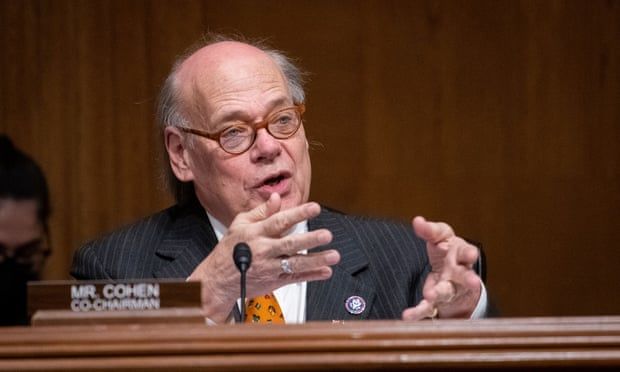 Steve Cohen says the US must establish ‘deterrents’ against lawyers accused of carrying out ‘unscrupulous work’
A US congressman has urged the Biden administration to ban six British lawyers from entering the US amid accusations that the lawyers have “enabled” “Putin’s” oligarchs by engaging in “abusive” lawsuits against journalists as part of an alleged effort to silence them.

Steve Cohen, a Democratic congressman from Tennessee, said in a letter to the US secretary of state, Antony Blinken, that the US needed to begin establishing “deterrents” against lawyers whom he accused of performing “unscrupulous work” that ultimately undermined democratic values.

“Despite our close ties with the United Kingdom, the nature of its libel laws and the vast amount of blood money in its financial system make it an ideal place for oligarchs to abuse the law to harass and intimidate,” Cohen wrote. He also cc’ed the US attorney general, Merrick Garland.

Most of the six lawyers named by Cohen have represented Russian interests who have pursued legal action against journalists, publishers and authors in the UK in connection to their reporting on Russia-related matters.

Four lawyers named in the letter were involved in legal action against Catherine Belton, a former journalist at the Financial Times, and her publisher HarperCollins, who were sued following the publication of her book Putin’s People. The lawyers include: Nigel Tait of Carter-Ruck, John Kelly of Harbottle & Lewis, Hugh Tomlinson, and Geraldine Proudler of CMS.

A letter published by 19 free press organisations last November expressed “serious concern” at the legal proceedings, which were brought at the time by the now-sanctioned Russian billionaire Roman Abramovich; Rosneft, the Russian energy company, and three other Russian billionaires. The organisations said they believed the cases against Belton and HarperCollins were so-called Slapps, a “form of legal harassment used by wealthy and powerful entities to silence journalists”.

HarperCollins settled the claims, agreeing to make a number of changes to the text.

Keith Schilling of Schillings was accused in Cohen’s letter of being “well known for bringing abusive suits against journalists” and working “tirelessly” to protect the Malaysian fugitive Jho Low, who has been accused by US prosecutors of running a money-laundering scheme in connection to the Malaysian state investment fund 1MDB.

Another lawyer, Shlomo Rechtschaffen, who is representing Walter Soriano – who was accused by Cohen of being an “enabler” of Oleg Deripaska, Abramovich and Dmitry Rybolovlev – has according to Cohen filed an allegedly “abusive” lawsuit against the American journalist Scott Stedman.

Cohen said the visa denials could be implemented under a section of the Immigration and Nationality Act which calls for “anti-kleptocracy and human rights bans”, and that ideally the bans would be made public.

All of the lawyers named in Cohen’s letter responded to the Guardian’s request for comment on the allegations set out by the congressman.

A spokesperson for Carter-Ruck said the claims by Cohen against the firm were “misconceived and are rejected entirely”.

A spokesperson for Harbottle & Lewis, where Kelly is a litigator specialising in “reputation protection, privacy and defamation”, said in a statement that the firm had acted at all times in accordance with its professional and legal obligations and took these matters very seriously.

Harbottle & Lewis added in connection to litigation involving Belton’s Putin’s People: “The firm has not engaged in an abusive lawsuit as alleged, and there was no such suggestion made when the proceedings were considered by a high court judge who reviewed the book and ruled that it contained a number of defamatory allegations. As such there is no basis for any such steps to be taken.”

A representative for Tomlinson said: “Regulatory rules for lawyers are very strict and work to ensure equal entitlement to independent legal advice. Mr Tomlinson acted properly and in accordance with those rules throughout and has never acted as Mr Cohen suggests. There is therefore no proper basis for Mr Cohen’s request.”

A spokesperson for Proudler’s firm, CMS, said it “strongly rejected” allegations of impropriety against CMS and Proudler. “We have reviewed the steps taken in our media litigation practice and are confident that these were compliant with all professional regulations as well as our wider responsibilities at the time.”

The spokesperson added that CMS had, since the invasion of Ukraine, not accepted new instructions from Russia-based entities or individuals with connections to the Russian government.

Proudler resigned last month from the board of the Guardian Foundation, the charitable arm of the media group’s parent company, as well as from the Scott Trust review panel, which adjudicates editorial complaints.

A spokesperson for Schilling said the firm was not acting for any “sanctioned entities” and that it hoped sanctions would foreshorten the war in Ukraine.

“We do not comment on client matters and indeed are not permitted to do so, but we fail to see how any representation of the Malaysian national named by Congressman Cohen could in any circumstances support the (in any event wholly misplaced) allegations that we are acting in the manner alleged in relation to Russian ‘oligarchs’,” the spokesperson said, adding that there was “no basis for any allegations that we have in any way behaved other than in the highest traditions of the legal profession in upholding the rule of law”.

In an letter published in February 2022, 15 free press organisations, including Index on Censorship, the Daphne Caruana Galizia Foundation, English PEN, and Reporters without Borders, argued that the case against Stedman had “many of the hallmarks of a Slapp”.

The letter said Stedman’s website, Forensic News, had published six articles and a podcast about Soriano, a British-Israeli security consultant, after he had been summoned by the US Senate intelligence committee. The letter said all the defendants in the case were based in the US, but that the lawsuit had been brought in London. Soriano was born in Argentina, and immigrated to Israel before moving to London.

The US letter comes as British MPs are engaged in a similar debate about “intimidation lawsuits”, with some arguing that expunging London’s alleged “dirty money” problem would require that oligarchs of any nation were not allowed to use the English legal system to silence free speech.

Last month, MPs in the UK accused three of the lawyers named in Cohen’s letter – Proudler, Tait and Kelly – of deliberately filing oppressive legal actions against an investigative journalist in an attempt to intimidate her. Similar allegations were also made against Tomlinson. They all denied the allegations.

Arabella Pike, HarperCollins’ publishing director, said in a tweet that she applauded the Cohen letter.

Belton declined to comment on the Cohen letter but in recent testimony before the House of Commons said it was clear that a lot of journalists had faced “a barrage of threats and intimidation, and our democracy has been so much poorer for it” because the public had not been able to learn properly about the background of oligarchs until recently.

“The entire population should have known the story about how Roman Abramovich won his fortune, but they had been deprived of that until now,” she said.