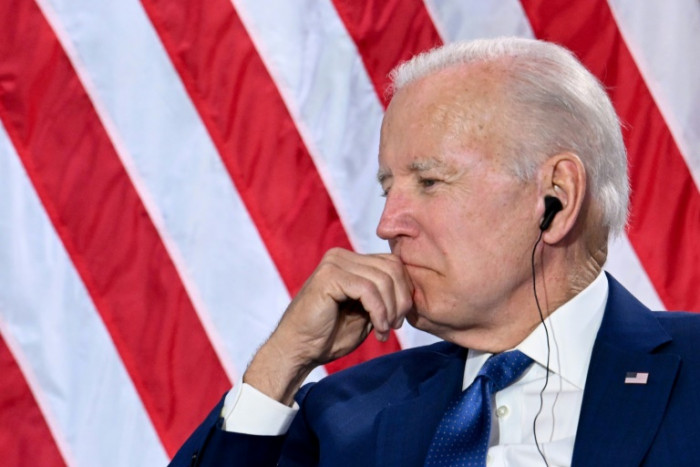 US inflation surged to a new four-decade high in May, defying hopes that price pressures had peaked and deepening President Joe Biden's political troubles as Americans struggle to meet the cost of essentials like food and gas.

Biden, whose popularity has taken a hit as prices surge, has made fighting inflation his top domestic priority, but is finding he has few tools to directly impact prices.

Reacting to the latest inflation figure, he blamed "Putin's Price Hike for most of the increases, saying in a statement: "We must do more -- and quickly -- to get prices down here in the United States."

The president has tried to hammer home his optimistic message about economic progress in the wake of the pandemic, including rapid GDP growth and record job creation, while pressing Congress to take action to lower costs on specific products.

He is due to speak later Friday about inflation, and likely will repeat his call to approve legislation to go after firms such as shipping companies that are taking advantage of limited competition to impose steep price hikes.

But the new data dealt a crushing blow to his efforts, as the consumer price index (CPI) jumped 8.6% compared to May 2021, up from 8.3% in the 12 months ending in April and topping what most economists thought was the peak of 8.5% in March.

Prices continued to rise last month for goods including housing, groceries, airline fares and used and new vehicles, setting new records in multiple categories, according to the Labor Department report.

Some economists expected the easing of pandemic restrictions to cause a shift of US consumer demand towards services and away from goods, which they said would ease inflation pressures, but prices for services increased as well.

CPI rose 1% compared to April, after the modest 0.3% gain in the prior month, the Labor Department reported, far higher than expected by analysts.

Fuel oil more than doubled, jumping 106.7%, the largest increase in the history of CPI, which dates to 1935.

"The price of fuel oil and natural gas is working its way through the economy," Biden economic advisor Brian Deese told CNBC. "The issue now is how can we actually make progress... that would improve that?"

"We're calling on Congress to move on shipping legislation that would bring down the cost of moving goods overseas."

Food and fuel prices have accelerated in recent weeks since the Russian invasion of Ukraine sent global oil and grain prices up, and American drivers are facing daily record gas prices, with the national average hitting $4.99 a gallon on Friday, according to AAA.

The United States has come roaring back from the economic damage inflicted by the Covid-19 pandemic, helped by bargain borrowing costs and massive government stimulus measures.

But with the pandemic still gripping other parts of the world, global supply chain snarls have caused demand to far outstrip resources. Meanwhile, the conflict in Ukraine has sent global oil prices above $100 a barrel.

The University of Michigan consumer sentiment index -- which measures how American consumers feel about the economy, personal finance and business and buying conditions -- fell sharply Friday from 58.4 to 50.2, its lowest recorded value.

The Federal Reserve has begun raising interest rates aggressively, with another big hike expected next week, and more ahead in coming months as policymakers attempt to combat inflationary pressures without triggering a recession.

The CPI surge "raises the probability of even more aggressive Fed rate hikes to tamp down on inflationary expectations," said Mickey Levy of Berenberg Capital Markets, adding that a pause in rate hikes in September is "looking increasingly unlikely."