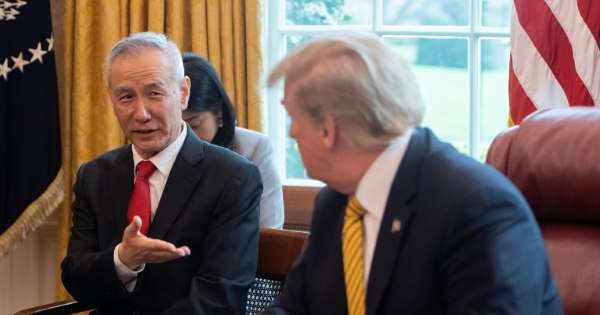 US prefers a 'big deal' with China: Trump

But with little sign the two sides have made progress in bridging the distance between them, speculation has mounted in recent months they may reach a deal which addresses only some of Washington's extensive grievances.

"I think it's not what we prefer at all. My inclination is to get a big deal," Trump told reporters when asked if he could accept a partial deal.

"We've come this far. We're doing well. I would much prefer a big deal and I think that's what we're shooting for," he added.

But he acknowledged that his preferred outcome is not certain.

"Can something happen? I guess. Maybe. Who knows. But I guess it's unlikely."

With eight days to go before the next round of punitive tariffs is due to hit, Beijing's top trade envoy Liu He will meet with US Trade Representative Robert Lighthizer and Treasury Secretary Steven Mnuchin beginning Thursday, the White House said in a statement.

Liu has said privately he will make a proposal that makes no commitments addressing the far-reaching reforms to Chinese industrial policy or subsides that Washington is seeking, Bloomberg reported Sunday, citing an unnamed source.

Lower-level talks have been underway since last month.

The discussions will focus on areas where Washington has made far-reaching demands since last year: intellectual property rights, the forced transfer of proprietary technologies, agriculture and enforcement, the White House statement said.

The next round of US tariff increases is set to take effect October 15, as US duty rates on $250 billion in Chinese goods rise to 30 percent.

But he also has said in recent months Chinese officials are dragging their feet in hopes of continuing negotiations with another administration should Trump fail to win reelection in 2020.

White House economic aide Larry Kudlow Monday denied that recent economic data showed the lingering trade war has damaged the US economy, saying the effect had been "minimum," a position most economists dispute.

Unemployment in September fell to its lowest level in 50 years but US manufacturing has fallen into recession, and GDP growth is forecast to slow considerably.

Trump is now the subject of an impeachment inquiry by congressional Democrats after pressuring Ukrainian authorities earlier this year to investigate his Democratic rival Joe Biden and son Hunter, whom Trump accuses of financial wrongdoing.

Trump last week raised the stakes by openly calling on Beijing to do likewise.

But Kudlow told reporters there was no connection between the trade talks and Trump's call for China to investigate the Bidens.

"There'll be no linkage," he said. "I guarantee it."
#Donald Trump  #Joe Biden