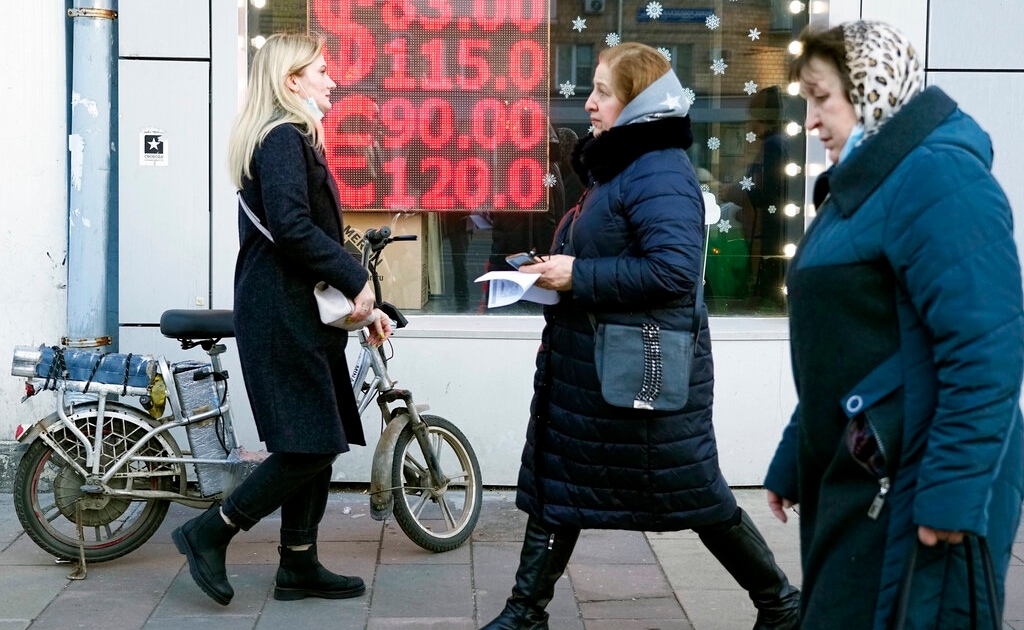 The decision further complicates Russia’s attempts to keep meeting debt obligations amid the sanctions imposed after it invaded Ukraine.

Russia’s efforts to avoid a sovereign default took another blow after the U.S. Treasury halted dollar debt payments from the country’s accounts at U.S. banks.

The decision further complicates Russia’s attempts to keep meeting debt obligations amid the sanctions imposed after it invaded Ukraine. As the government tries to sidestep its first external default in about a century, those restrictions have hampered and delayed the process of transferring money to bond holders.

Other governments are also planning tougher sanctions after allegations that Russian troops massacred civilians in Bucha and other Ukrainian towns. The European Union is proposing to ban coal imports from Russia, which would be a major step-up for a region that’s so far shied away from targeting energy flows crucial to the bloc’s economy.

The U.S. announcement is intended to force Russia into either draining its domestic dollar reserves or spending new revenue to make bond payments, or else go into default, according to a spokesperson for the Treasury’s Office of Foreign Assets Control, who discussed details on condition of anonymity.

“Clearly this latest announcement by the U.S. Treasury is designed to put additional pressure on the Russians,” said Gary Kirk, a portfolio manager at TwentyFour Asset Management. “The alternative payment methods are significantly more punitive and more challenging for Russia and hence it does increase the chances of a technical default.”

Despite warnings from credit-rating companies and others, Putin’s government has so far stayed current on its foreign debt obligations.

But the sweeping sanctions have already led to the seizure of an estimated two-thirds of Russia’s reserves. The central bank says it’s also sold some of its foreign currencies to support the ruble, leaving questions on how long it can pull from its local coffers to pay its debts.

Russia’s foreign-currency and gold reserves were about $604 billion as of March 25, down $38.8 billion from a February peak. Still, it’s reaping in huge sums from exports of energy. Bloomberg Economics expects it will earn nearly $321 billion this year if the commodities continue flowing. 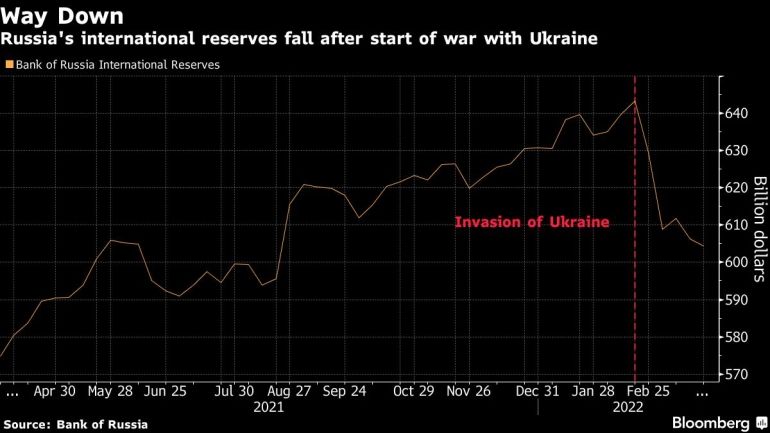 But even with the funds, payments haven’t been smooth, with many delayed by banks doing lengthy checks to ensure they aren’t breaching sanctions.

A once-$2 billion dollar bond that matured Monday served as the most recent stress test, though Russia was able to buy back about three-quarters of the outstanding amount in rubles before the note came due. The latest U.S. move will intensify scrutiny on its ability to pay back the remainder of that debt.

Additionally, coupon payments due Monday on a 2042 bond had yet to reach some investor accounts as of Tuesday morning in London, according to bondholders who declined to be named because they are not authorized to speak publicly.

Russia’s dollar bonds, which were already trading well into distressed territory, fell on Tuesday. The 2042 declined 7 points to about 28 cents on the dollar, according to CBBT pricing.

The U.S. announcement “increases the risk of default, not because of lack of money,” said Lutz Roehmeyer, chief investment officer at Berlin-based Capitulum Asset Management. “The new sanction will cause technical issues with regard to the settlement systems, so it is now an open question how Russia will construct the payment routes.”