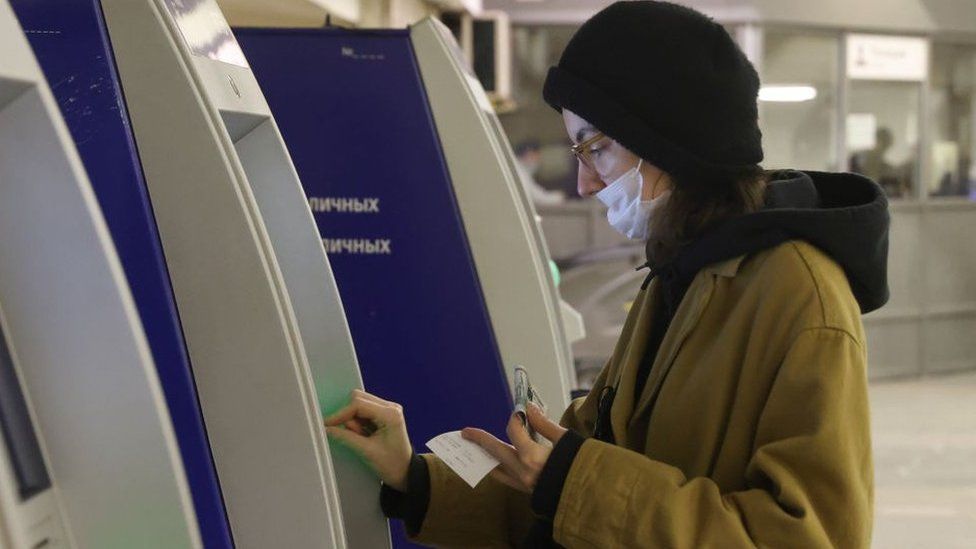 Both firms have also said that cards issued abroad will no longer work at businesses or ATMs in Russia.

But Russia's major banks, including state-backed Sberbank, have already downplayed the impact the move will have on their clients.

"This war and the ongoing threat to peace and stability demand we respond in line with our values," Visa's chief executive, Al Kelly, said.

In a statement, Mastercard also described the ongoing invasion of Ukraine as "shocking and devastating".

"Noting the unprecedented nature of the current conflict and the uncertain economic environment," Mastercard said it had "decided to suspend our network services in Russia" on Saturday.

Together, the two companies control about 90% of credit and debit payments in the world, outside of China.

Russia's central bank insisted, however, that all Visa and Mastercard bank cards issued by Russian banks would continue to operate normally on Russian territory.

Russia's biggest state-backed bank, Sberbank, said similar, adding the cards would work "to withdraw cash, make transfers using the card number, and for payment at offline as well as at online Russian stores".

Cards will continue to work on Russian territory, the bank said, because all payments in Russia are made through a national system and don't depend on foreign systems.

Several Russian banks also suggested that they would start issuing cards that use the Chinese UnionPay system, coupled with Russia's Mir payment network, to avoid any impact for consumers.

Both Visa and Mastercard had already announced that they would comply with sanctions introduced by Western countries since the start of the conflict.

"Our colleagues, our customers and our partners have been affected in ways that most of us could not imagine," Mastercard said.

The card company has operated in Russia for more than 25 years. It confirmed that it would continue to pay the wages of its 200 staff members there.

Visa added: "We regret the impact this will have on our valued colleagues, and on the clients, partners, merchants and cardholders we serve in Russia."

US President Joe Biden "welcomed the decision" during a phone call with Ukrainian leader, Volodymyr Zelensky, according to a White House readout.
#Joe Biden