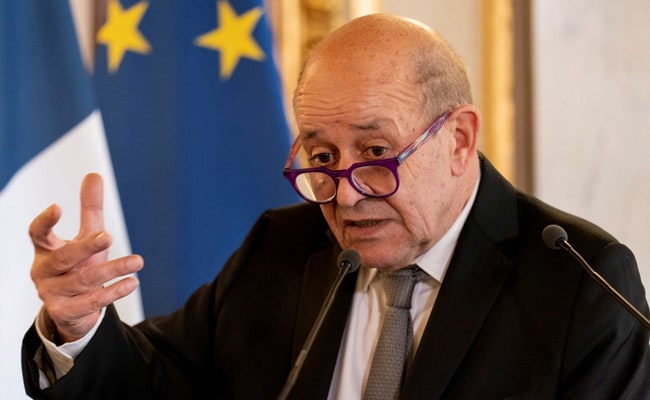 Way Out Of Crisis Over Submarine Deal Will Take Time: France Tells US

France's top diplomat told Antony Blinken that a phone call between the of presidents of US and France had been a "first step" towards repairing relations, according to a French foreign ministry statement.
The way out of the diplomatic crisis between France and the United States over a mega submarine deal will "take time and require actions," French Foreign Minister Jean-Yves Le Drian told American counterpart Antony Blinken Thursday.

France's top diplomat told Blinken that a phone call Wednesday between presidents Emmanuel Macron and Joe Biden had been a "first step" towards repairing relations, according to a French foreign ministry statement released after the bilateral in New York.

Le Drian and Blinken's behind-closed-doors meeting took place at the offices of the French mission to the United Nations on the sidelines of the UN General Assembly and lasted about an hour.

For much of the week, Le Drian had refused to say he would take part in a head-to-head meeting with Blinken.

France's foreign minister had called Australia's decision to ditch a deal to buy French submarines in favor of US vessels a "stab in the back."

France also recalled its ambassadors from Washington and Canberra over the deep row.

But after Biden and Macron's call, the two leaders vowed to launch "in-depth consultations... for ensuring confidence" and to meet in Europe at the end of October.

A joint statement also said Macron would order France's ambassador back to Washington next week.

White House Press Secretary Jen Psaki told reporters the talk "was friendly" and Biden was "hopeful this was a step in returning to normal."