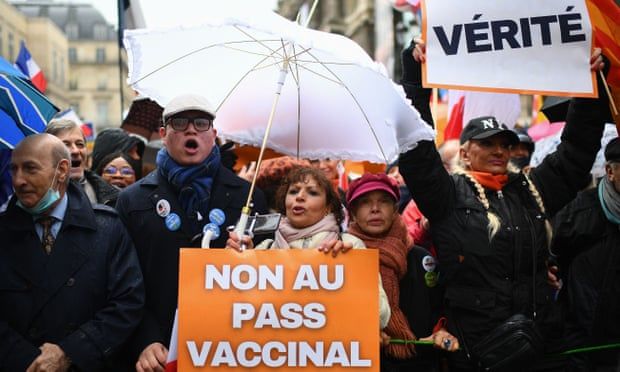 ‘We’ll piss you off’: French anti-vaccine-corruption protesters rally against Macron

The French president is imposing more social curbs in bid to convince unvaccinated to get jabbed
Anti-vaccine protesters rallied in cities across France on Saturday, denouncing President Emmanuel Macron’s intent to “piss off” people refusing Covid-19 shots by tightening curbs on their civil liberties.

Macron said this week he wanted to irritate unvaccinated people by making their lives so complicated they would end up getting jabbed. Unvaccinated people were irresponsible and unworthy of being considered citizens, he added.

In Paris, protesters retorted by adopting his slangy wording, chanting “We’ll piss you off”.

Others carried signs saying “No to the vaccine pass”, a reference to Macron’s legislative push to require proof of vaccination to enter venues such as cafes, bars and museums.

TV images showed skirmishes between protesters and police at one site. Protesters also rallied through the streets in Marseille, Nantes and Le Mans among other cities.

“[Macron’s remarks] were the last straw. We are not irresponsible,” said hospital administrator Virginie Houget, who has avoided a mandatory vaccine order for health workers because she caught Covid-19 late last year.

The protesters accuse Macron of trampling on their freedoms and treating citizens unequally. He says freedoms carry responsibilities that include protecting the health of others.

France recorded more than 300,000 new coronavirus infections for the second time in a week on Friday. Hospitalisations, including Covid-19 patients in intensive care (ICU), are rising steadily, putting the healthcare system under strain.

Some hospitals have reported that 85% of ICU patients are not vaccinated against Covid-19. Data shows that 90% of over-12s eligible for the Covid shot are fully vaccinated.

People in France already have to show either proof of vaccination or a negative test to enter restaurants and bars and use inter-regional trains. But with Omicron infections surging, the government wants to drop the test option.

Three months before a presidential election, Macron’s blunt language appeared to be calculated, tapping into a mounting frustration against the unvaccinated.

On the capital’s streets, protesters accused Macron of politicising the pandemic in the run-up to the election.

“I want him to piss off drug dealers and criminals, not the average person,” said one 55-year-old protester who requested anonymity because he runs a business.
#Coronavirus  #COVID-19  #vaccine  #Covid