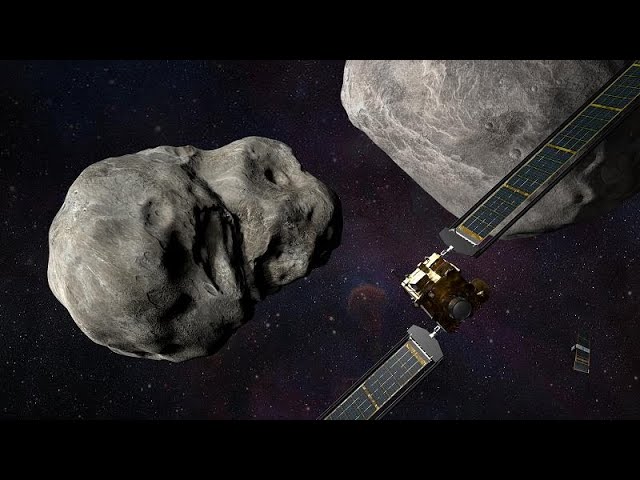 NASA is launching an extraordinary mission on Wednesday to knock an asteroid slightly off course.

While it may sound like the plot to a science fiction film that ends in tragedy, this first real-world experiment is safe, scientists say.

A spacecraft the size of a golf cart will blast off from Vandenberg Space Force Base in California on Tuesday at 10.20 pm PST (Wednesday 7 am CET) before travelling 10 months on a collision course with an asteroid.

Here is all you need to know about the mission, which is called DART (Double Asteroid Redirection Test).

Why do we need to knock into an asteroid?

The asteroid that will be knocked off course is six million miles away and is no threat to Earth now, scientists say, adding that the DART mission will not make it a danger either.

"First and foremost, these asteroids are not a threat to the Earth, They are no danger to earth,” said Nancy Chabot, DART coordination lead, Johns Hopkins University Applied Physics Laboratory.

“They are not on a path to hit the Earth in the foreseeable future. That makes them an appropriate target for a first test. But what really makes these asteroids ideal for this first test, it's because it's a double asteroid system," she said at a press conference.

While the asteroid and mission pose no threat to the planet, scientists want to see how its direction changes after being hit, so that if one day an asteroid is heading our way we may know what to do to avert disaster.

"The DART mission is about demonstrating deflection of an asteroid, changing its course, and doing it by hitting it with a spacecraft,” said Andy Cheng, DART investigation team lead, Johns Hopkins University Applied Physics Laboratory during a press conference.

“So the DART spacecraft has to hit the asteroid, then DART has to measure the amount of deflection and then we want to understand why that deflection came about, how it works. So, it's all about measuring the momentum transfer," he added.

Scientists say this could help in the future.

What will happen on the mission?

A SpaceX Falcon 9 rocket will carry DART into space, which will head to the asteroid Didymos, which circles the sun just outside of Earth's orbital path.

DART will spend about 10 months travelling towards the asteroid. But DART will crash into Didymos’s smaller asteroid called Dimophos at a speed of approximately 6.6 km/s.

In short, the spacecraft will aim for the larger asteroid to orient itself and in the final hour will detect and switch course towards the smaller one.

Researchers will then be able to measure changes in the orbital relationship between Dimorphos and Didymos, which will help them to calculate how this tactic could divert an asteroid from hitting Earth.

Could an asteroid hit Earth one day?

NASA has tracked almost all of the asteroids that could be large enough to damage Earth. But while there are no big asteroids heading our way in the foreseeable future that could change life as we know it, there are smaller ones that have yet to be found that have the potential to wipe out a city.

The DART mission could help prevent that.

"If one day an asteroid is discovered on a collision course with Earth - and we have an idea of how big that asteroid is, and how fast it's coming, and when it would hit, that kind of information - then we will have an idea how much momentum we need to make that asteroid miss the Earth," Cheng said.

NASA says while no known asteroid larger than 140 m in size has a significant chance to hit Earth for the next 100 years, only about 40 percent of those asteroids have been found as of October 2021.

What happens after the mission?

In 2024, the European Space Agency is expected to launch another mission to travel to the two asteroids and will observe the crater on Dimorphos and determine the mass of the asteroid.