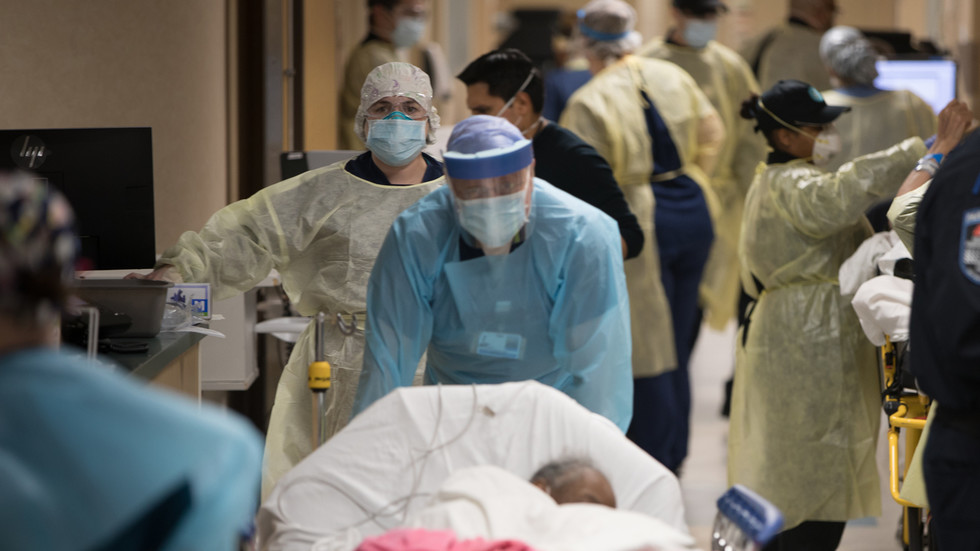 Why are healthy unvaxxed nurses being fired as those with Covid work on?

Over the past two years, Covid-19 has left a trail of devastation – epidemiological, emotional, political – in its rampage from Wuhan throughout the world. One of its biggest casualties has been the public's trust that the Western medical industry is evidenced-based and focused on health over all other concerns.
Covid began to spread in the United States in January of 2020. Predictably and professionally, doctors and nurses rolled up their sleeves and went to work. Long shifts, uncomfortable masks, and constant cable television fear mongering couldn't stop these frontline medical caregivers from doing their jobs. They kept going, spurred on by appreciative patients and a public who lauded them as heroes.

They kept going, that is, until hospital administrations across the country began firing them.

The first coronavirus vaccine emerged in December of 2020, just under a year since that initial US case, and was quickly given special dispensation by the Food and Drug Administration's Emergency Use Authorization. Many people, especially healthcare workers, lined up to get theirs as soon as it was available to them. Some, though, declined. Their reasons were myriad: not enough time had elapsed between the start of development of these novel treatments and their rollout to fully test for long-term safety and efficacy; mRNA vaccines used new technology; data showed that Covid presented far less danger to those who weren’t elderly, obese, or otherwise chronically ill.

As patient autonomy is a foundational principle of Western allopathic medicine, one might imagine that the decisions of these medical professionals would be respected. Certainly, all of them knew, many firsthand, of the coronavirus’ potential mortality. Neither could one accuse them of being ignorant of pharmacology or unable to evaluate medical literature. These choices were made by informed professionals paid to explain the risks and benefits of medical therapies to other people.

Then in America, the land of the free, Joe Biden turned to tyranny.

President Biden announced in August 2021 his plan to use OSHA regulations to bypass Congress and force all organizations with more than a hundred employees to take the vaccine, as well as every healthcare worker at hospitals that take Medicare or Medicaid. By that time, stories – rare but horrible – of healthy individuals experiencing sometimes debilitating side effects after the first jab, second jab, or booster started circulating. Case after case, albeit in small numbers, of myocarditis and Bell's palsy and death, appeared on official reporting systems. Breakthrough Covid infections around the world proved that the vaccines didn't provide immunity or prevent transmission. Unvaccinated doctors and nurses, skeptical before, became resolute. The Biden administration proved just as stubborn, however. After stumbling over court rulings, the president found success at the Supreme Court, which struck down the vaccine mandate… with the exception of medical workers. That ruling prompted hospitals and hospital systems, under threat of loss of Medicare dollars, to act as the enforcement arm of the federal government, even if they hadn't been doing so already.

The Mayo Clinic has fired 700 employees.

In Texas, nurses are being let go.

Since August of last year, the Biden administration's leap over the legislative process has cost the American medical system thousands of jobs, none easily replaced.

If testing wasn't available, perhaps these firings could simply be attributed to caution, but tests are available.

If the vaccines had been proven to confer immunity and prevent transmission, one might cite patient safety concerns, but they have done nothing of the sort.

If hospitals were overstaffed with an abundance of nurses and physicians, or if Covid cases were on the decline, maybe all these sacked workers wouldn't be missed. However, staffing shortages existed well before Covid, and the Omicron variant, milder but more contagious, has filled up emergency rooms and hospital beds once more.

When faced with these realities, Biden didn't budge. Instead, the Centers for Disease Control changed its Covid guidelines. Now, unvaccinated and healthy doctors and nurses remain unemployed and, at the moment, unemployable, yet vaccinated but Covid-positive staff are being told to come to work, sometimes even when still experiencing symptoms. This phenomenon isn't isolated. It's happening in Boston, in California, in Rhode Island, and in Arizona.

If none of this quite makes sense to you: that’s because it doesn’t. If you're wondering who's to blame, take your pick. A Biden administration that's descended to bureaucratic bully tactics? A CDC whose mismanagement and bad advice over the last two years has probably rendered it untrustworthy for at least the next decade? Money-hungry hospital administrators whose loyalty is to the insurance companies and government entities who pay them, not the healthcare staff who do the work? All of the above?

Where do we go from here? I can't say, but down this direction lies disaster, for the American patient more than anyone.
#Coronavirus  #Joe Biden  #Vaccines  #COVID-19  #vaccine  #Covid