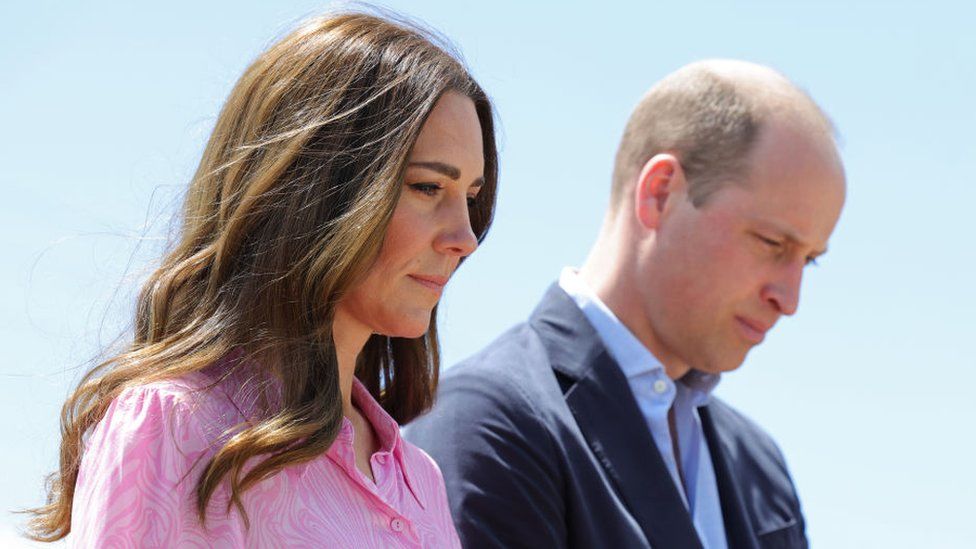 National flags still adorn the streets of Antigua's capital days after the Earl and Countess of Wessex departed the island on their Platinum Jubilee Caribbean tour. 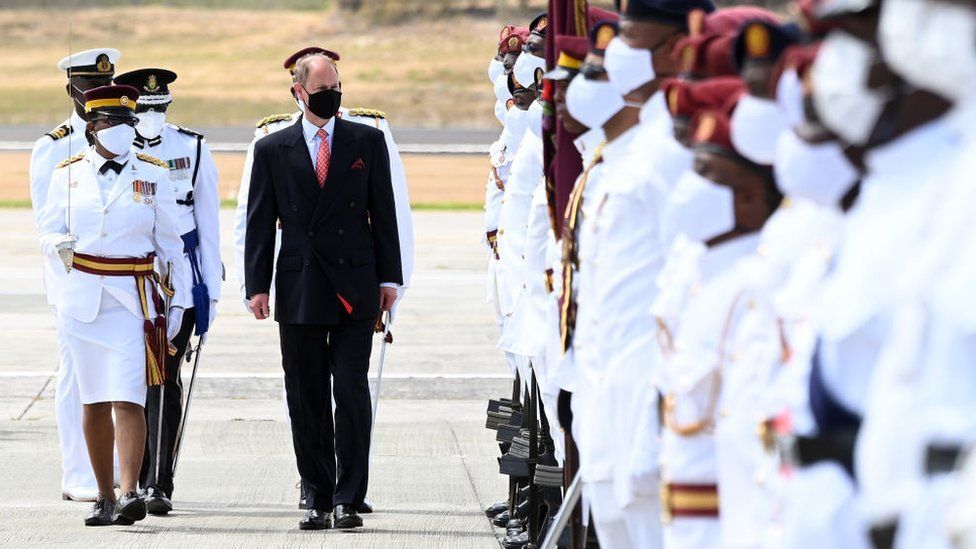 Prince Edward was met by a Guard of Honour as he arrived in St John's, Antigua

People here pride themselves on the welcome offered to visitors - tourism is the country's mainstay after all. But behind the red carpet and guard of honour upon arrival, the royal couple's trip was met with pervasive apathy mixed with simmering resentment.

It was not always this way. Decades ago, the royals were greeted like "deities", says local historian Ivor Ford.

"We would all turn out to see them and wave flags. I suppose we didn't know better then," he muses.

Antigua and Barbuda marked 40 years of independence from Britain last year. Today the nation - like its regional counterparts - retains a complicated relationship with its former colonial master.

Increasing awareness of the Caribbean's history and growing calls for financial reparations for slavery, coupled with a rise in pan-Africanism, are among the reasons cited for the shift in sentiment.

Barbados' removal of Queen Elizabeth II as head of state last November spurred calls across the region for more islands to follow suit. 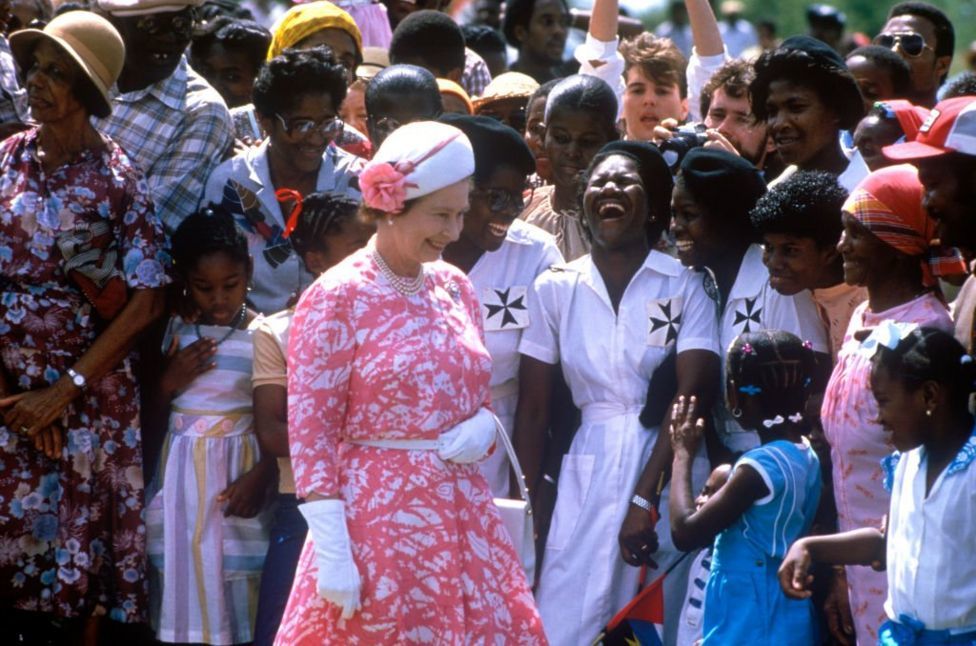 Sentiments have shifted since the Queen visited Antigua in 1985

"I think most Antiguans would want to replace the Queen now," Mr Ford continues. "Young people can't relate to the Royal Family; they don't understand their purpose. Even older people like me, I would love to see us become a republic. The head of state should be someone who is elected like in America."

The country's prime minister, Gaston Browne, alluded to long-term plans for such a move during a meeting with Prince Edward and Sophie on Monday - shortly before requesting the couple use their influence to facilitate "constructive talks" on reparatory justice for slavery.

Days earlier, the chair of the country's Reparations Support Commission, Dorbrene O'Marde, had issued an open letter to the Wessexes demanding compensation for enduring "injury, injustice and racism", adding that the royals continue to live in "splendour, pomp and wealth attained through the proceeds of the crimes". 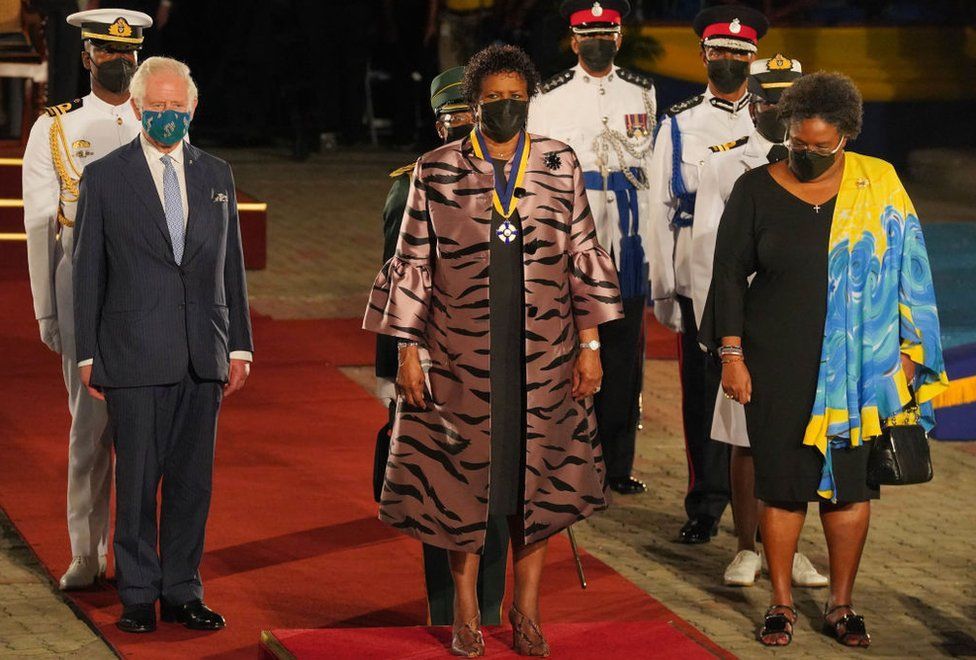 Prince Charles attended the ceremony at which Barbados became a republic

Businesswoman Makeda Mikael attended none of Monday's festivities, in contrast to her childhood when she says youngsters "had no choice" but to do so.

"We didn't know as much about our history then as we do now," she tells the BBC. "In school I wasn't taught African or Caribbean history. I knew everything about British and European history and nothing about ours."

Ms Mikael is a staunch advocate for reparations.

"England has enjoyed the benefit of our slave labour right up to today and they need to be honest, admit it and find a way to reconcile," she says.

As for the Queen, "the majority of people couldn't care less if she's head of state or not", she adds. "The Queen is not a significant part of anybody's agenda." 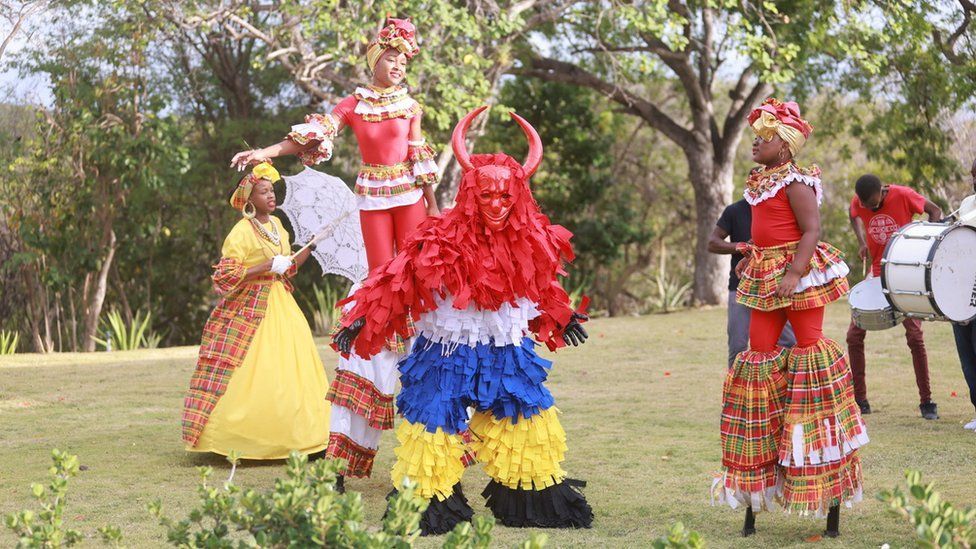 Anti-royal sentiment in Antigua was more muted than in St Vincent where few can have failed to notice the juxtaposition of the red carpet welcome with the placard-bearing protesters that greeted the Wessexes when they touched down last Saturday.

"Generally people say they're tired of having the Queen as head of state. We're an independent country and there's no real benefit anymore," says radio station owner Douglas Defreitas.

"It's not like before when we could go to England without a visa; now there are restrictions. The call for reparations is in the air and that's the catalyst being used to propel the Queen's removal."

In October St Vincent will mark 43 years of independence.

"Years ago, royal arrivals were very robotic in the sense that we were told to line the streets and wave flags; we were taught to be a particular way," Mr Defreitas says, adding: "I believe it's time for us to become a republic; we should have our own autonomy." 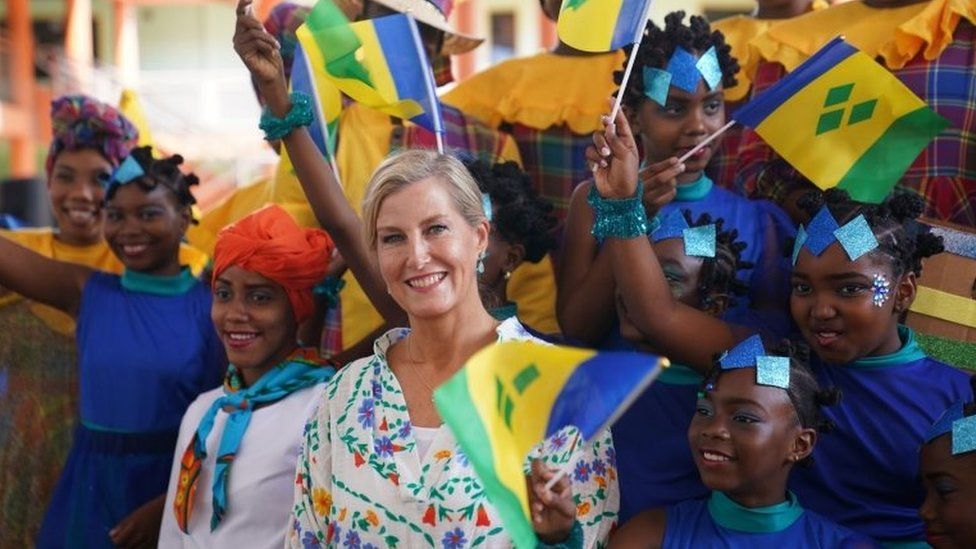 A dance company in St Vincent gave the Countess of Wessex a warm welcome, but that feeling was not universal

The days of colonialism may be largely over in the Caribbean - save for a smattering of tiny territories - but former powers continue to make their presence felt via unpopular policy decisions which strike at the heart of many islands' economies.

Pressure to end the veil of secrecy surrounding banking in tax havens has decimated some countries' offshore finance industries, while EU threats to axe access to the Schengen Area to nations selling "golden passports" could soon put the boot into the region's lucrative citizenship by investment schemes too.

"It causes anger," Mr Defreitas says. "If they can still have an influence on us now, you can imagine why many people think we should just go the whole hog and become a republic."

Like Mr O'Marde, Mr Defreitas concedes slavery reparations will not be imminent.

"We know it'll be a long haul. I'd like to see it not in the form of money for politicians to spend. What we need is all our infrastructure renovated and expanded to meet our capacity needs for the next 30 years," he says.

"Hundreds of years of slavery have left an indelible mark on our people. Darker Black people are still at a disadvantage - it's deep-seated," he adds. 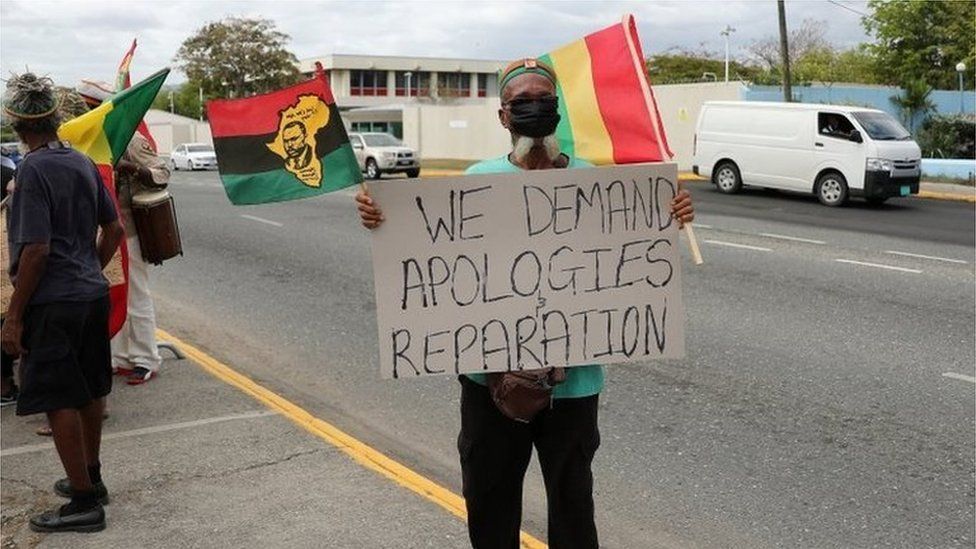 Ernesto Cooke, editor-in-chief of the St Vincent Times, says many residents feel royal visits to the country are as anachronistic as the monarchy itself.

"Britain needs to meet people halfway on the issue of reparations, offer a compromise; people would then feel a sense of justice," he says.

The Wessexes were not the only royals to encounter demonstrations amid Platinum Jubilee celebrations.

Prince William and Kate's visit in March to Jamaica, Belize and the Bahamas also sparked a series of protests demanding an apology and reparations for slavery.

While the Duke of Cambridge expressed "profound sorrow" over the "abhorrent" trade, many felt the speech made at a dinner in Jamaica did not go far enough.

"We don't want an apology from William, or Kate or Charles; we want to hear it from the Queen herself," Mr Cooke adds.

Prince Edward and Sophie also visited St Lucia where protesters may have been largely absent but some anti-royal rhetoric was evident. 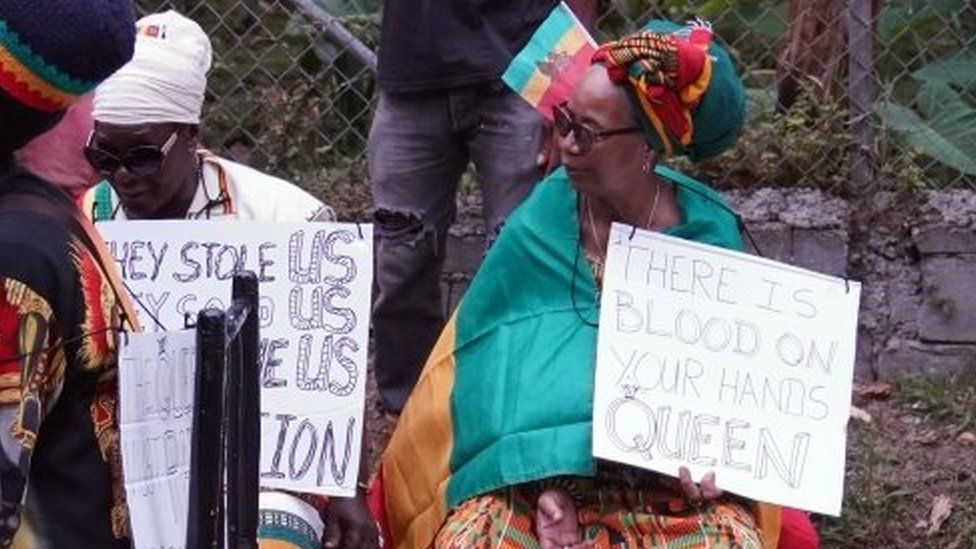 "There are two distinct camps," says local photographer Kirk Elliott. "There are those who are enlightened and aware of our history, and those who grew up in an era where the monarchy was of greater significance.

"History is written by the conqueror; we have now become more aware of our history and the way it's been presented," he adds.

In recent years, the Black Lives Matter movement which started in the US has brought racial injustice to the fore. In the Caribbean, pan-Africanism - the idea that people of African descent have common interests and should be unified - has also seen an upswing.

As for the path ahead, Mr O'Marde believes the region will continue to cast aside lingering vestiges of its colonial past.

"The next step for Antigua and Barbuda will be to become a republic which will affect the monarchy's role, as essentially that's where their power lies; they still have ultimate control over our parliament," he says, adding: "That will be mirrored across the Caribbean."