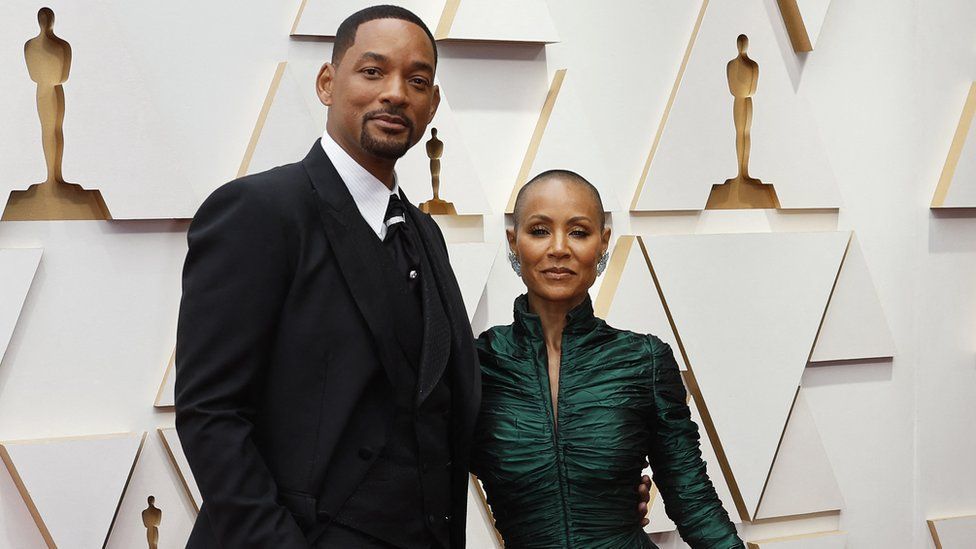 Why did Will Smith hit Chris Rock at the Oscars?

The actor made headlines at the Oscars after hitting the comedian over a joke about his wife.

After years of declining viewing figures, the Academy were desperate for more people to watch the 2022 Oscars.

After years of declining viewing figures, the Academy were desperate for more people to watch the 2022 Oscars.

They tried all kinds of ways to boost ratings - big stars, live performances, charismatic hosts, a new category and cutting the craft prizes down to edited highlights.

But in the event, a comedian telling a joke and a Hollywood A-lister's furious over-reaction to it would ultimately be what seized the world's attention.

The Academy wanted eyeballs. It has got them now.

Prior to Sunday's ceremony, it was widely expected that Will Smith would win his first-ever Oscar, for his performance as the determined father of Venus and Serena Williams in King Richard. What wasn't expected, however, was that he would go down in Oscars history for an entirely different reason.

Awards ceremonies are ripe environments for crazy moments. Think of Kanye storming the MTV Awards stage during Taylor Swift's acceptance speech; the wrong best picture winner being announced at the 2017 Oscars; or politicians having drinks poured over them at the Brits.

But it's hard to recall a more shocking and violent moment than Will Smith smacking Chris Rock in the mouth, a clip which has already been viewed hundreds of millions of times in the space of just a few hours.

"I think it brings new meaning to the term punchline," Rebel Wilson joked at the Vanity Fair afterparty. "I'm lucky I got through the Baftas unscathed." 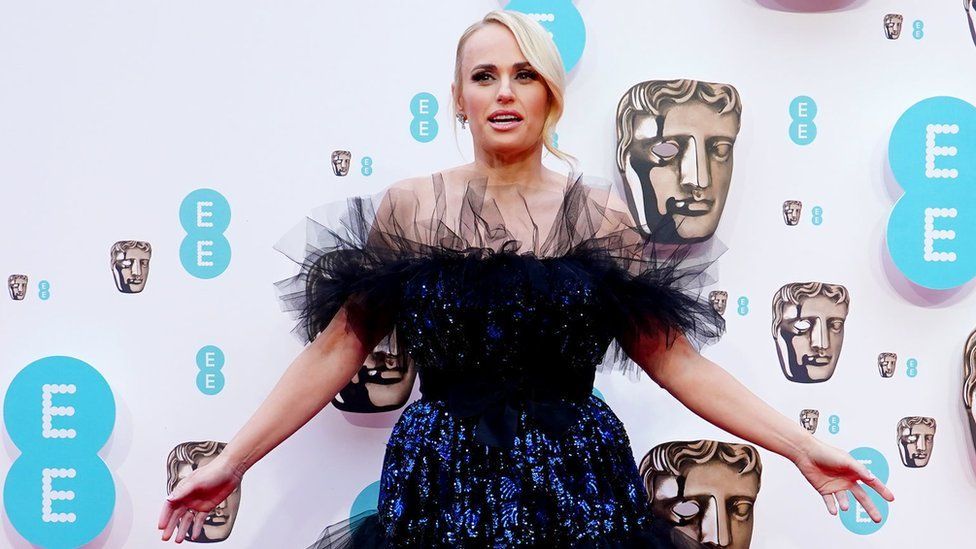 Wilson made light of the fact that Smith wasn't present to collect his best actor prize when she hosted the Bafta Film Awards in London earlier this month.

"Will Smith won for King Richard, but I thought his best performance over the past year was being OK with all his wife's boyfriends," she joked from the stage, a reference to the couple's apparently open relationship.

After an audible gasp from the crowd, the Australian comic added: "What? Come on, he didn't show up."

Will and Jada Pinkett Smith, who have been married for 24 years, have previously spoken publicly about their extra-marital romances.

During one 2020 episode of Jada's US chat show Red Table Talk, the couple sat down to address public speculation about an alleged affair Jada had had with R&B singer August Alsina.

"I got into a different kind of entanglement with August," she admitted during the discussion, confirming that she and Will were "separated, amicably" at the time.

"An entanglement?" Will replied with a raised eyebrow.

"A relationship," she clarified. 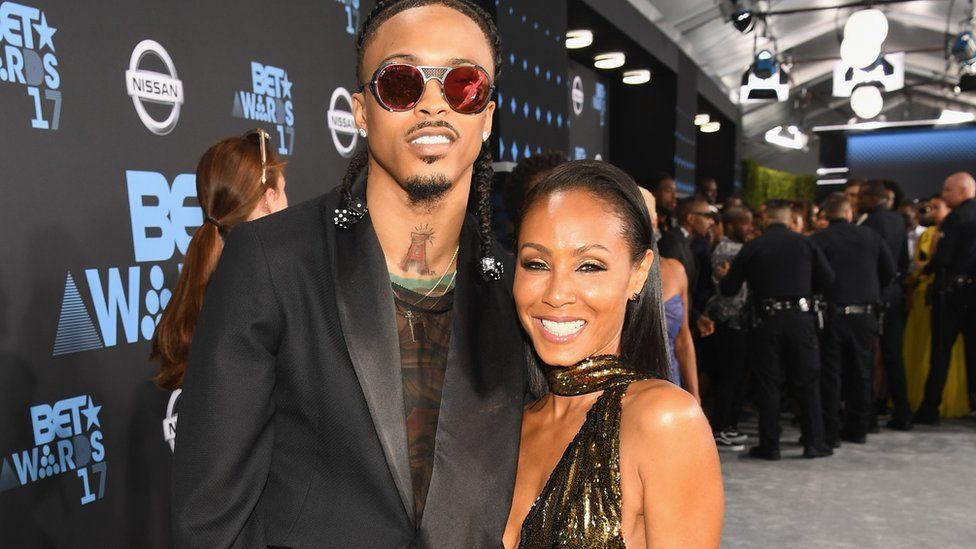 August Alsina and Jada Pinkett Smith at the 2017 BET Awards

Their open and honest discussion was praised by some viewers, but the couple have also been mocked for their ambiguous relationship status and Jada's tendency in particular to air private family matters on her talk show.

And yet, despite their on-again-off-again romance, the pair have never divorced and there has never been any doubt about Will's devotion to his wife and his family.

That devotion, together with the public's struggle to understand his complex marriage, perhaps explains why the actor was riled by Wilson's comments at the Baftas.

Following his win, Will was asked about his relationship on Entertainment Tonight, and insisted that there had "never been infidelity" in his marriage.

"Jada and I talk about everything. We have never surprised one another with anything ever."

Study the actor's choice of words here to see how careful and precise he was being. To the casual observer, it might have looked like he'd denied any extra-marital affairs.

But actually, his wording allowed for the fact that both of them could have dated other people, without it being considered cheating by the other. In other words, they gave each other permission to have other relationships.

Why air all of this in public? "I have decided that chatter about my life can be of a benefit to people," he said. 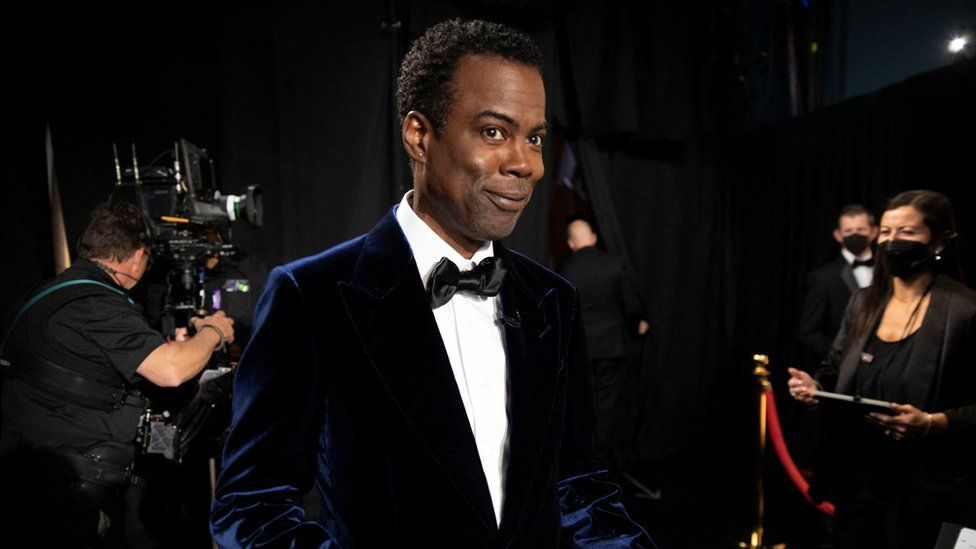 But it wasn't their relationship status that Rock was mocking on Sunday. It was something more basic but potentially more painful than that - Jada's appearance.

It was not the first time he had made a joke at her expense. In 2016, Rock hosted the Academy Awards in the year of the #OscarsSoWhite scandal, which led to Jada snubbing the ceremony.

But, as Rock humorously (and correctly) pointed out: "Jada boycotting the Oscars is like me boycotting Rihanna's parties. I wasn't invited!"

Six years later, he mocked her at the Oscars again. Except, this time, she was in the audience to hear it. And, unfortunately for Rock's jawline, so was her husband.

"Jada, I love ya," he began after taking to the stage to present best documentary, adding: "GI Jane 2, I can't wait to see it!"

This joke was a reference to the 1997 US war drama GI Jane, which saw Demi Moore shave her head to play Jordan O'Neil, the first woman to undergo Navy Seal training. 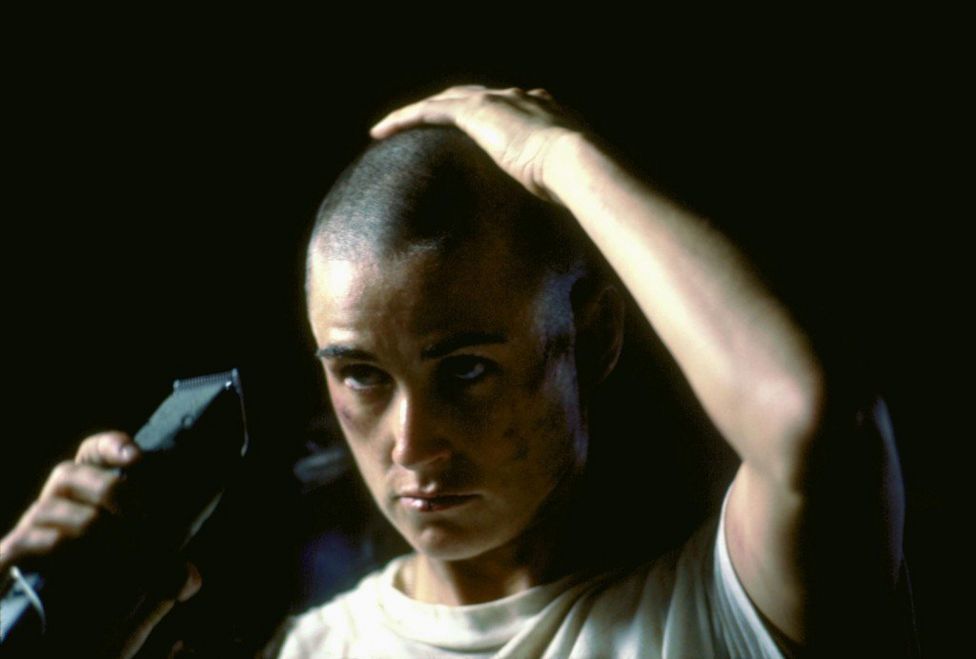 By implying that Jada could star in a possible sequel, Chris Rock was poking fun at her closely-shaven head.

What he might not have realised is that Jada has alopecia - an auto-immune disorder that causes hair loss.

She looked cross about the joke, rolling her eyes, and we all know what Will Smith did next.

The on-stage altercation travelled around the world in seconds. Smith's short temper would come to define the entire 2022 ceremony.

There were elements of performative alpha-male behaviour at play here. An instinctiveness for a man to harm another man who insults his partner.

But the whole episode raises the question of what is off-limits in comedy. Many have argued celebrities are used to the pressures of being in the spotlight and are therefore fair game for jokes. But others say Rock crossed a line by commenting on Jada's health condition and that Will was right to defend his wife.

It's worth noting that Rock's joke wasn't the most offensive we've heard from an awards ceremony compere in recent years. If the significantly-more-brutal Golden Globes host Ricky Gervais had been fronting the Oscars on Sunday instead, he might be in a coffin by now.

"I think a comedian's job to walk that line about what is acceptable about comedy," Wilson said after the Oscars. 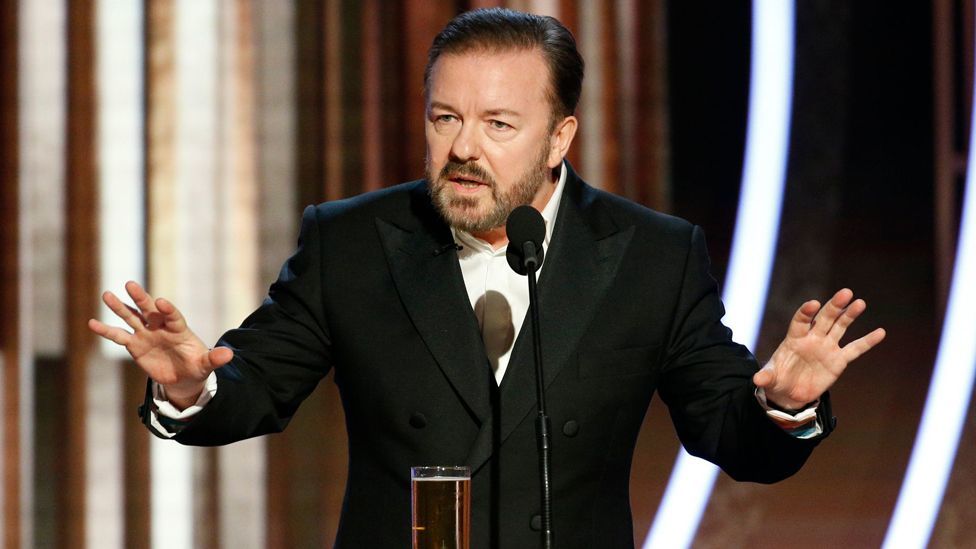 Others went further in defending Rock.

Director Judd Apatow wrote in a since-deleted tweet: "He could have killed him. That's pure out-of-control rage and violence. They've heard a million jokes about them in the last three decades. They are not freshman in the world of Hollywood and comedy. He lost his mind."

The incident loomed large over the rest of the ceremony. When Amy Schumer, one of the three hosts, returned to the stage following the punch, she joked knowingly: "Did I miss something? It feels like the vibe has changed." The audience was relieved to have someone defusing the tension.

Backstage in the press room, there was complete silence as everyone watched the altercation on the overhead screens. At first, most people assumed it was some kind of pre-planned sketch. Two showbiz veterans of this stature would know how to stage a fake slap.

By the time Smith was sitting back in his seat and shouting to Rock to "keep my wife's name out your [expletive] mouth", it was clear this was serious. A seasoned professional like Smith would know better than to drop the F-bomb on stage during a live TV broadcast. 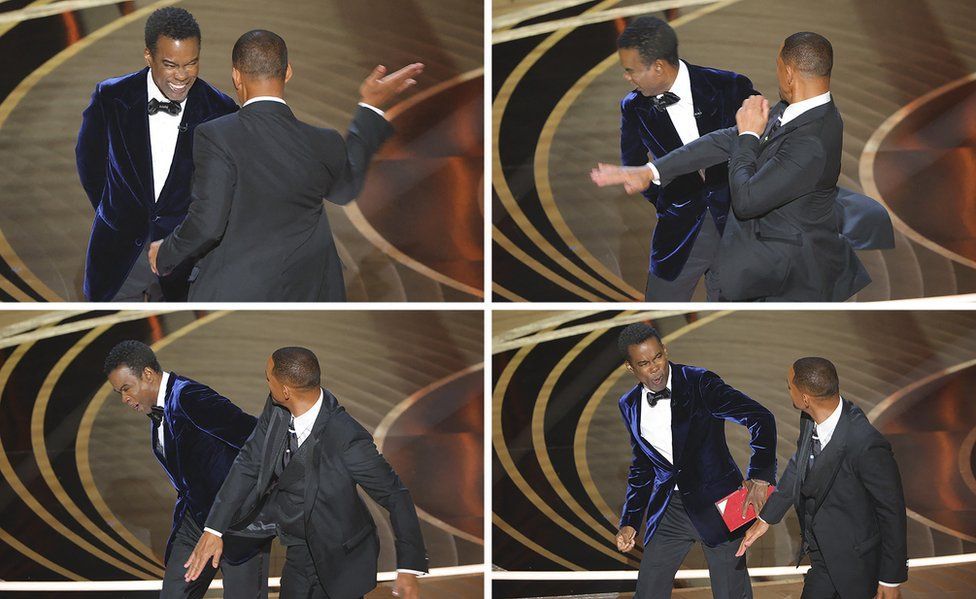 Viewers at home didn't hear the swearing. Broadcast network ABC had cut the live feed to avoid offending viewers at home. In the winners' room Academy staffers looked just as shocked as the journalists did. "I thought they were doing a bit," one said to his colleague.

Rock, meanwhile, looked visibly shaken. But he dealt with the situation with remarkable presence of mind. Realising he'd just made Oscars history, he made light of what had just happened, commenting: "That was the greatest night in the history of television."

It inevitably overshadowed the rest of the evening. Stars like Billie Eilish, Jessica Chastain, Jane Campion and many more showed up to answer questions and react to receiving the highest honour in showbusiness. But it was clear all anybody could think about was the smack.

Summer of Soul director Questlove was asked about what it was like having to accept best documentary straight after Smith had hit Rock. "I'm not going to talk about that," he replied.

Later, another journalist asked Chastain to react to what happened. She was about to answer when an Academy staffer cut her off and moved on to the next question. 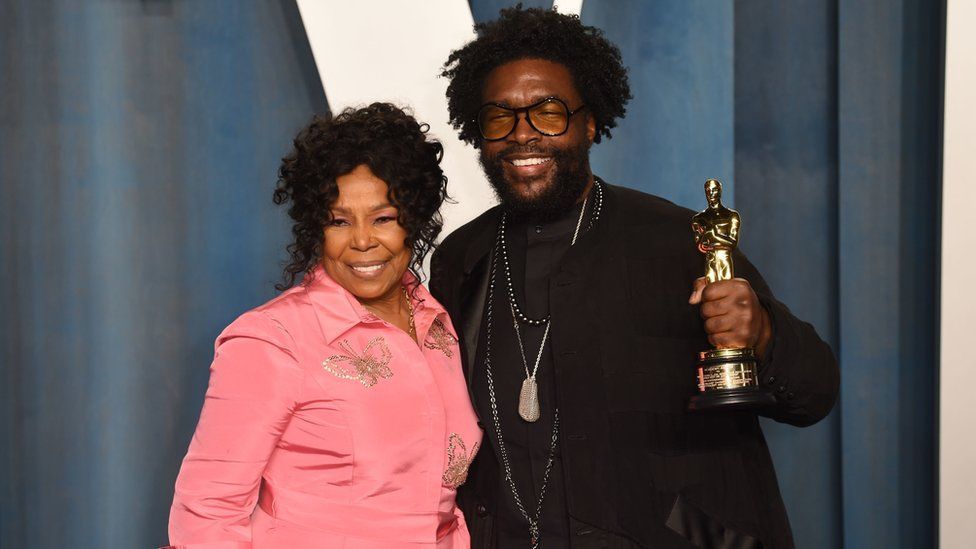 The best actor category was one of the last ones of the night. Smith duly won. But with his aggression still at the front of everyone's mind, he delivered a slightly bizarre acceptance speech, the subtext of which was that his anger with Rock was justified because of his own love for and instinct to protect those closest to him.

"Richard Williams was a fierce defender of his family," he began, attempting to link the character he played in the film with his behaviour at the ceremony.

"Denzel [Washington, friend and fellow nominee] said to me a few minutes ago, he said, 'At your highest moment, be careful, that's when the devil comes for you.'"

He concluded with an apology to everyone present, with the notable exception of Rock.

For its part, the Academy said it "does not condone violence of any kind".

Smith has been under severe pressure for several weeks - both due to the exhaustion of campaigning in awards season and the increased scrutiny of his marriage. But few would agree that is an excuse for violence.

His reputation and career is now in the hands of public opinion. The debate that rages over the next few days will be crucial.