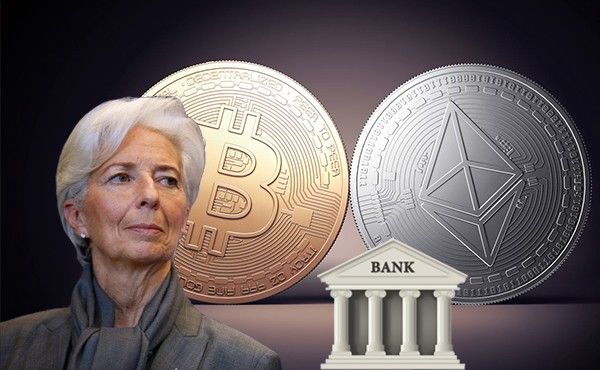 "Cryptos are not currencies. Full stop," Lagarde emphatically said in the video. "Cryptos are highly speculative assets that claim their fame as currency, possibly, but they're not. They are not."

More than just bashing out at "cryptos," Lagarde shows a deep need to suffocate something that threatens her job and its agenda. Putting "cryptos" aside, which are indeed not currencies, there is Bitcoin that is not only a currency but has the potential to turn the ECB and other organizations that have the monopoly on money creation worldwide wholly obsolete. But before discussing Lagarde's agenda as the head of the ECB, the meaning of "currency" needs to be determined.

What Is A Currency?

Currency is then something used for someone in exchange for some other product or service. But this medium of exchange role of money is only one of the many characteristics of a good monetary medium. Money also serves as a store of value and a unit of account.

Does this mean Lagarde doesn't understand what a currency is? Unlikely. As the head of one of the leading central banks globally, it is fair to expect her to know what a currency precisely is. The catch, however, is that it is in her best interest to promote her institution's and her fellow central banks' currencies at the expense of others. If Bitcoin were irrelevant and posed no threat to central banks, the ECB President would simply not be talking about it.

Mainstream media will undoubtedly share Lagarde's remarks, and the general public might even see them as the truth. Well, let it be that way. In the end, it is free press for Bitcoin. People historically selected which monetary goods to use based on the benefits they brought to those utilizing them, but in the past couple hundred years, central banks have dictated what ought to be adopted by determining the mediums with which citizens can pay their taxes — until Bitcoin came along.

Bitcoin Is A Currency

Bitcoin, born just twelve years ago, is long past being magic internet money. The peer-to-peer digital monetary network idealized and invented by Satoshi Nakamoto has grown over the "collectible" status to start being recognized as a store of value. Indeed, high-profile investors in developed economies are stating how superior it is to gold — the best store of value for centuries.

The meaning lies in the historical path monetary goods usually take from inception to becoming accepted and used worldwide. New money historically starts as a collectible item, something a tiny percentage of the population sees value in and purchases for different reasons. As its value increases over time and the money perdures, more people notice, increasing adoption and enabling it to be seen as a store of value. Then, the money is mainly hoarded as more and more people acknowledge its demonstrated ability to increase purchasing power compared to other well-established money in that society. This stage is likely where Bitcoin is currently at.

Investors, companies, and people around the world are waking up to Bitcoin's value proposition. As adoption increases, the peer-to-peer digital cash will keep progressing in its monetary path to become a widely accepted medium of exchange. Lastly, with sufficient adoption, bitcoin can get recognized as a unit of account.

National currencies are the only kind of currency being used as units of account, each in its own country, due to political mandates and lack of legal options. However, in the medium of exchange side, different goods can often be used as the transacting parties see fit based on their own needs.

This is already playing out in many countries in the world. Kenya, Nigeria, and other African countries are becoming hotbeds for Bitcoin usage as a store of value and a medium of exchange as citizens face currency debasement, monetary colonialism, and scarce access to the banking system. Similarly, in Central America, El Salvador recently adopted bitcoin as a legal tender after the Bitcoin law was enacted last week. Where the majority of the population doesn't have a bank account, real change is happening with Bitcoin.

Central Banks Fear Bitcoin
Lagarde's comments on Bitcoin and "cryptos" bring to light the fear of those who currently hold the monopoly of money creation. Their actions of moving towards central bank digital currencies (CBDC) further showcase an attempt to tell the public, "hey, we can be digital too!" But the people won't be fooled.

Satoshi Nakamoto created parallel money that doesn't require permission from a central authority to be used. Bitcoin allows people of any background, nationality, religion, and race to access sound money.

Beyond empowering those marginalized by the permissioned monetary system pushed forward by the ECB, the Federal Reserve, and the International Monetary Fund, Bitcoin also provides everyone with an opportunity to be their own masters — something a digital euro or digital dollar will never be able to accomplish.

Bitcoin was created as a direct response to the bailouts given to the banks that caused the subprime crisis in 2008. Big corporations can afford to be reckless because there's always a friendly central bank to rescue them and pardon their debt while the average citizen pays the price.

But apparently, only now have those central banks noticed the reason why Satoshi Nakamoto and the cypherpunks before him brought Bitcoin to the world, and they can't help but fear the end of a centuries-long monopoly. They aren't at ease with the idea of seeing the end of a colossal power that empowers banks, corporations, and influential individuals at the expense of regular citizens who work hard to pay the very taxes that sustain such a system. But the people say no more; because now, they have Bitcoin.