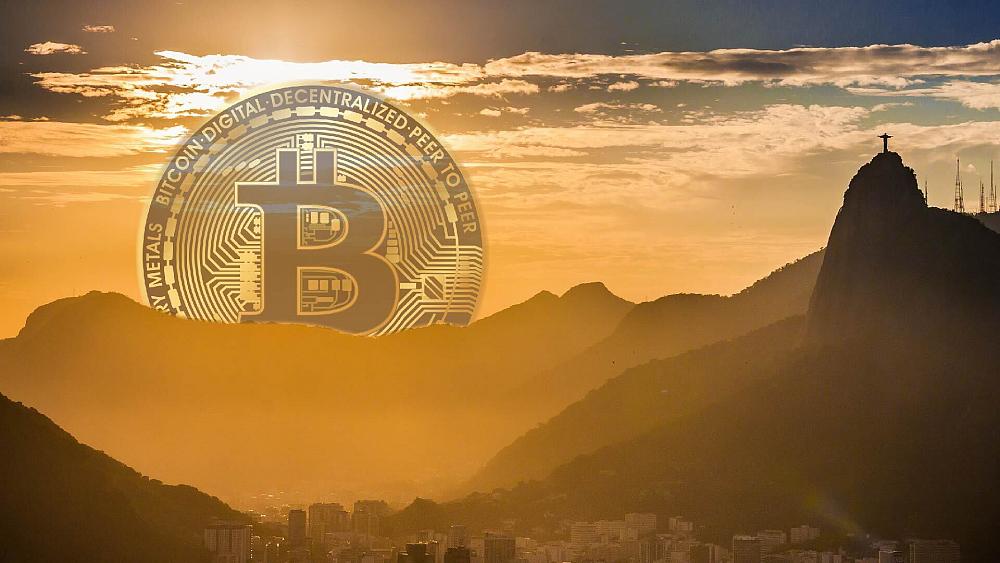 Lawmakers in El Salvador made history on Tuesday when they voted to make Bitcoin legal tender, the first country in the world to recognise a cryptocurrency on such terms.

Momentum behind the move built up at breakneck speed.

Just three days passed from Salvadoran president Nayib Bukele announcing his plans for the crypto at the Bitcoin 2021 conference in Miami on Saturday, to legislation being voted on and approved in the country’s Legislative Assembly.

What’s more, the new law, passed by the president’s populist New Ideas party with a supermajority of 62 votes to 22, will be fully enacted within 90 days.

Such a move is indeed historic and unprecedented, but it’s perhaps not entirely surprising given the deepening relationship many countries in Latin America are developing with cryptocurrencies and what they are being used for.

Pushing aside the well-aired concerns about decentralised and unregulated currencies like Bitcoin, in Latin America at least, it’s being seized upon not by the ultrarich but by many facing grinding poverty.

From the Rio Grande in Mexico to the tip of Patagonia, crypto has become a lifeline for millions.

While it’s the only country to have taken the plunge so far, El Salvador has set in motion change that is likely to sweep up many more with it.

Is El Salvador the first domino to fall?

Following the vote in the Salvadoran assembly, politicians in Argentina, Paraguay, Brazil and Panama took to social media to endorse the decision.

Of these countries, it looks increasingly likely Paraguay will soon follow El Salvador’s example or at the very least, introduce favourable laws towards cryptocurrencies.

One man in particular is leading the charge; a 36 year-old Paraguayan congressman called Carlos Rejala.

Having vociferously expressed his support for Bukele on social media, Rejala alluded on Monday to an "important project" which would "innovate Paraguay in front of the world".

"As I have been saying for a long time, our country must move forward hand in hand with the new generation. The moment has come, our moment," he tweeted.

While specific details of the project are yet to emerge, speculation is rife that it will involve both Bitcoin and Paypal. Rejala is also widely expected to present a bill before the country’s parliament which would facilitate crypto mining and attract crypto businesses looking to set up in the country.

According to Coindesk, Rejala first began following the Bitcoin trend in 2017 before eventually becoming a crypto trader himself in 2019. Following the vote in El Salvador, he shared a photo of himself embellished with the red "laser eyes" now synonymous with proponents of Bitcoin.

He is not alone in his admiration for Bukele - or Bitcoin.

In Panama, too, lawmakers are mobilising to put forward plans for new crypto-friendly laws.

On Monday, Gabriel Silva, a deputy in the country’s National Assembly, reposted one of Bukele’s tweets and announced that he was looking to draft a proposal to put to his parliamentary colleagues.

"Panama cannot be left behind. If we want to be a true technology and entrepreneurship hub, we have to support cryptocurrencies," he posted.

But what is it in particular that makes Central and South American countries such fertile grounds for this crypto boom?

As in many countries in the developing world, nations in Latin America are intermittently beset by political and economic crises and the crippling hardships caused by them.

In the face of soaring inflation, and in the absence of traditional banking services for large swathes of the population, Bitcoin and other cryptos have become part of the way of life.

“The Latin American countries where you have this combination of inflation or hyperinflation cycles - deflation as well - and then you have very high friction for financial transactions, a high percentage of people who are unbanked, cryptocurrencies make total sense,” Fred Thiel, CEO of US-based Bitcoin miner Marathon Digital Holdings, told Euronews.

“You only need to have a phone really to use it. And in these countries, most people do have phones”.

In El Salvador, around 70 per cent of the population do not use or have access to banking services. It’s not just Latin America, either, where phone ownership outstrips bank account holders. 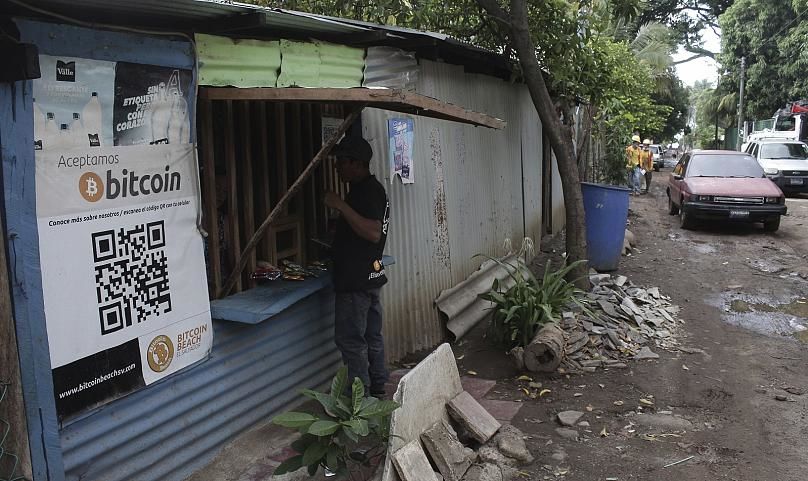 Santos Hilario Galvez, a Salvadoran builder, makes a purchase at a small store that accepts Bitcoin, in Tamanique, El Salvador.

"So, those are areas where you are going to see a lot of options for digital currencies".

Of course, each country is different and faces its own set of circumstances. In El Salvador, the official acceptance of Bitcoin as a legal tender alongside the US dollar was a common sense approach to removing boundaries to one of its main economic drivers: remittances from abroad.

Remittances - transfers of cash or goods made in this case by migrant workers - make up almost 20 per cent of El Salvador’s GDP with some $6 billion (€4.9 billion) sent back to the country each year by Salvadorans living abroad.

"I think partially in the case of El Salvador, this is a way to deal with inflation," Thiel explained.

"It’s a way to bolster the economy by removing fees being paid for money that is already being sent to the country and most of those fees are being collected outside of El Salvador".

While economic growth has slowed in recent years, inflation in El Salvador remains comparatively low compared to other countries in the Americas.

Worse still is Venezuela where inflation peaked at 1.8 million per cent in 2018. While nowhere near that high at present, forecasts by economists predict that inflation will stand at 1,400 per cent at the close of 2021.

In March, the country’s central bank printed a 1 million bolivar note for the first time, worth around just €0.40.

Through necessity, Venezuelans began to dabble in crypto and digital currencies much sooner than many of their regional neighbours in a bid to outpace the rampant hyperinflation wreaking havoc on their lives.

With its economy in freefall and its political system splintering, the country launched the world’s first state-backed digital coin, the Petro, in 2018. Pegged to Venezuela’s oil reserves, it had minimal success. As civil unrest continued to grow and the country’s fiat currency further deteriorated, cryptocurrency transactions soared in a bid to prevent the value of incomes being eroded.

"As soon as people get their pay or earn money doing something, they convert it right away into Bitcoin," Thiel explained. "Because also the currency system is very controlled in these countries and it’s very hard to buy dollars so you have to buy them on the black market".

Is the world warming to Bitcoin?

While the merits of decentralised cryptocurrencies continue to be debated, the genie is already out of the bottle with Bitcoin.

El Salvador’s move to make it legal tender is another step towards making cryptocurrencies a mainstream feature of the global financial ecosystem, but as yet it’s unclear whether countries outside the developing world are ready to warm to Bitcoin and its ilk in the same way.

There’s no question that, at the very least, a thawing is now well underway, according to Thiel.

"I think we’re going to see a lot of policymakers in countries outside the G7 and G8 adopt fairly positive stances towards the use of Bitcoin other than certain regimes which view it as a threat, such as China," he told Euronews.

Home to 75 per cent of the world’s Bitcoin mines, China has intensified a crackdown on mining operations and cryptocurrency trading in recent months.

"It’s typically nations where they really want to control more of the economy where they try to limit this," Thiel said.

"You’re going to see a lot of pronouncements from the G7/G8 here regarding central bank digital currencies".

Many of the leading industrial nations are beginning to delve into the prospect of launching their own digital currencies, including China, the US and the UK. Plans for an e-currency are already well advanced in Sweden, for instance, which is one of the countries where digital payments are increasing the fastest.

Cryptocurrencies are not without their risks, particularly given the extreme volatility in the price of Bitcoin. Despite the encouraging news from El Salvador, the value of Bitcoin has continued to slide.

But for some countries though, including those in Latin America, the risks surrounding Bitcoin will continue to be a more attractive prospect during times of economic turbulence than digital currencies that are tied to equally volatile fiat currencies or wholesale reliance on the US dollar.

"I think we’re going to see a broad adoption of digital currencies across the board, it’s just in some cases Bitcoin is the ideal currency because it’s just pervasive and easily used," posited Thiel. "And it allows a country to align itself with a currency like Bitcoin which is not tied to a particular nation".