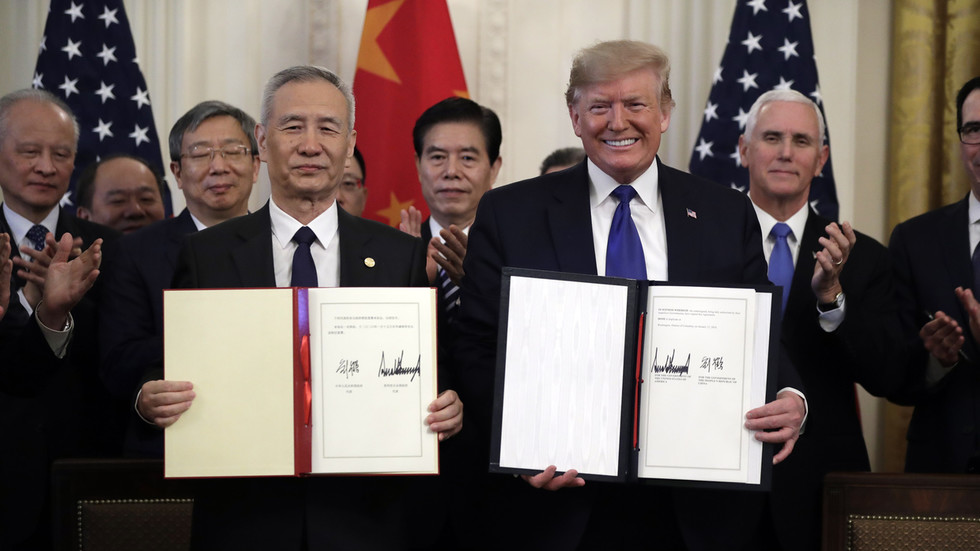 Trump hailed his 2020 deal with Beijing as “transformative” for the US. He was right – it’s made ordinary US citizens much poorer
At the end of January, the US-China ‘phase one’ trade deal made under Donald Trump expired. The agreement, struck in January 2020 at the very beginning of the Covid-19 pandemic and before ties with Beijing fell off a cliff, stipulated that China would purchase (ludicrously) over $200 billion in agricultural products from the US per annum in order to end Trump's trade war. It was more like a one-sided extortion, placing huge demands on Beijing with very little compromise on the huge tariffs he had slapped on them.

Trump trumpeted it as a “transformative” victory for the US. It’s little surprise that it has turned out, for many reasons, not to be that at all. Come its expiry, China had met only 57% of its commitment, and the losers turned out to be the American economy and its people.

Various studies have shown that Americans have borne almost the entire cost of these tariffs in the form of higher prices. As one analyst has put it: “President Joe Biden’s decision to leave Trump’s tariffs in place raises the question of whether US trade policy has any concern for American consumers’ welfare, or is instead guided primarily by the need to bolster corporate profits.”

The failure by China to buy as much as promised has provoked criticism from the Biden administration, which is embracing the failed Trump policy without hesitation, with US Trade Representative Katherine Tai accusing China of “unfair economic practices,” demanding concessions and threatening unspecified consequences.

But it's also a tough-talking way to hint that the US wants economic dialogue with Beijing, albeit in the continued framework of ‘America First’ that makes one-sided demands and seeks more access to the Chinese market.

Biden may embrace Trump's trade policies; however, he is no Trump, nor does Beijing fear him as such. This time around, it's China which holds all the cards. And with the US being dogged by eye-watering inflation, a lackluster economy, and multiple interest rate hikes on the way, Xi Jinping is not going to bow as easily to American demands.

Biden is sticking stubbornly with Trump's tariffs, even though Treasury Secretary Janet Yellen herself calls them counterproductive and it is beyond question that the trade war with Beijing has been a political, economic, and strategic failure.

If the goal of the tariffs was to shift supply chains out of China and to bring ‘American jobs’ back home, it has been a non-starter. Instead, China's overall trade surplus at the end of 2021 stood at $676 billion – a record high – while bilateral trade with the US surged by 28.7% to $755.6 billion. There are a number of reasons for this, including America having underestimated China's trading resilience, as well as its competitiveness over alternative suppliers such as Vietnam and India.

It is clear that the trade war on China has cost America dearly – one study estimates that it caused US export losses of $119 billion from 2018 through 2021, and the higher prices American consumers had to pay for imported goods, parts, and raw materials contributed to the surge in inflation to 7.5%, a 40-year high. Trump's model has not only failed, but it is also unsustainable.

Yet despite this, the Biden White House continues to moan about the “unfair economic practices” which China apparently pursues. This is just a populist buzz phrase, slightly toned down from the openly Sinophobic “cheating” and “stealing” terms used by the Trump administration, which were used to imply that China's economic success is a conspiracy against America and comes at its loss.

The real culprits behind the US decline – such as structural factors like lack of investment, globalization, China's bigger labor force and cheaper production costs, as well as its larger consumer market – are ignored in favor of a zero-sum, misleading narrative that China's “state practices” are exclusively responsible for America's woes.

The reality is that American companies, as part of America's ultra-capitalist and free market system, voluntarily chose to have their goods made in China so as to make more money. Apple isn't forced by China to make its iPhones there, is it? It is a pure business decision based on cost and quality factors.

Yet for Washington, the new bipartisan consensus is to make China the populist scapegoat for all the US’ economic woes, in order to pursue unrealistic protectionist goals that backfire while legitimating other containment-based policies against Beijing. It also weaponized ‘forced labor’ allegations in Xinjiang due to grievances on trade and goods of strategic interest, such as, for example, solar panels. But despite all of this, the US continues to demand more access to the Chinese market.

Why should Beijing acquiesce to this? Rather than cave in to US demands, China should realize the negotiating cards are stacked up in its favor. First of all, the inflation situation in the US means Biden has little political space to weaponize more tariffs, and cannot do so in the utterly destructive manner Trump did. Yellen's opposition to tariffs as they are, as Treasury secretary, further makes this unlikely.

Secondly, China has a growing number of trade alternatives which allow it to rely less on the US. The Regional Comprehensive Economic Partnership (RCEP), a mega-Southeast Asia and Pacific-wide trade deal, commenced in January. China, similarly, has free trade negotiations underway with the Gulf cooperation council (Kuwait, Oman, Qatar, Saudi Arabia, and the United Arab Emirates), Ecuador, and Papua New Guinea, and is applying to join the Comprehensive and Progressive Agreement for Trans-Pacific Partnership (CPTPP), which the US excluded itself from. Beijing should prioritize these agreements, not capitulate to a US that simply wants China to buy ever increasingly unrealistic amounts of its goods whilst it blanket-bans products from Xinjiang.

China is not stupid enough not to negotiate with the US, and will publicly embrace and even encourage talks. However, neither will it be submissive or meek in doing so in the manner they arguably were with Trump. China is in a complicated spot, competing with the US geopolitically while yearning for stability in its relationship with it and seeking to preserve economic ties that aid its own development. Negotiations should not be shunned, but Biden should be pressed for a very hard bargain, and any deal that does not involve scrapping the Trump tariffs should be a non-starter.

This is in the interests of the US too, as it will help offset its inflation dragon, but is it politically possible? The Trump tariffs represent a ‘sacred cow’ of sorts in US politics now, and conceding them would see Biden accused of appeasement by Republicans in the run-up to the midterms.

So he needs to fashion something he can sell as a win, and that's probably why he's angling at such negotiations now. But if China has learnt anything from the past two years, it should be not to rush to give him what he wants. The US wants more market access? China to import more US goods? Make them pay a high price for it. The US economic boom is sputtering, and it ultimately can't afford further trade confrontation with China.
#Donald Trump  #Joe Biden  #COVID-19  #Covid