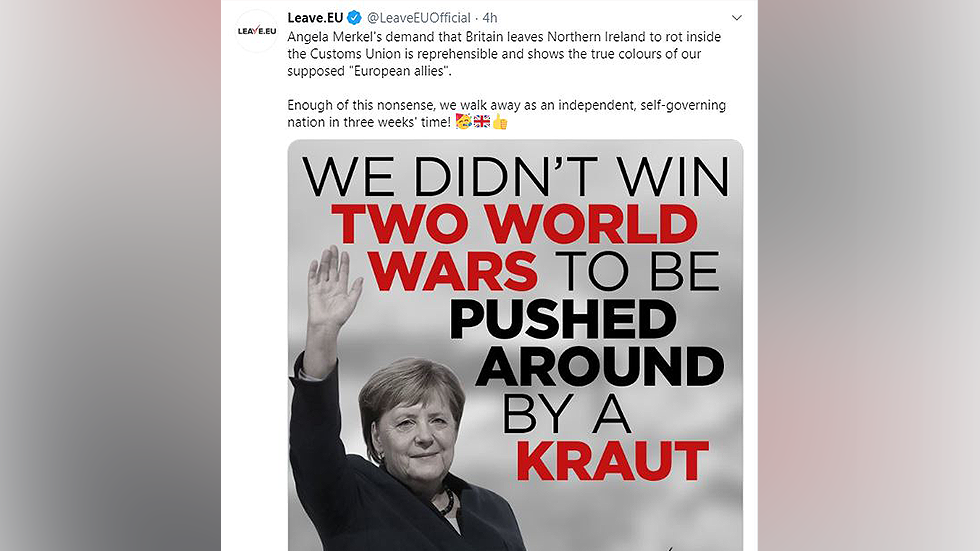 Leave.eu, the official campaign group that supports the UK leaving the EU, has caused uproar on social media, after tweeting an inflammatory meme of Germany’s Angela Merkel in relation to the ongoing Brexit crisis.
The group voiced their displeasure at reports Merkel warned British PM Boris Johnson in a phone call on Tuesday morning that a Brexit deal was “overwhelmingly unlikely” unless he agreed to Northern Ireland remaining in the EU’s customs union.

Leave.eu responded on Twitter, slamming Merkel for her “reprehensible” demands, claiming such a move only underlined the “true colours of our supposed European allies.” The group attached a meme with a somewhat suggestive picture of the German chancellor and war-like language.

The word Kraut is a derogatory term for a German, particularly a German soldier, commonly used by Britain and its allies during World War I and World War II.

The tweet has provoked anger online with some suggesting such rhetoric was “outrageous, offensive and inciteful.” David Lammy, Labour’s Tottenham pro-remain MP issued an apology to the EU, branding the pro-Brexit group’s tweet as “xenophobic bile.”

Johnson and Merkel discussed the intractable Brexit issue, with the UK PM stressing that if this is the EU’s new established position, then a deal is “essentially impossible not just now but ever,”according to a Number 10 source.

Last week, the UK government unveiled its plans for a renegotiated Brexit deal, with Johnson insisting that they presented a “very reasonable offer.” Under the new proposals it would see the Irish backstop replaced with electronic and a “number of physical” customs checks on the island of Ireland.

Brussels gave a damning response to the plans, claiming they could not even serve as a rough outline for a final agreement. Johnson has been rushing to strike a deal ahead of the October 31 deadline for leaving the bloc.
#Boris Johnson  #Angela Merkel  #Johnson